When treatment-refractory neuropsychiatric symptoms develop in older persons with chronic mental illness, differential diagnoses, treatment and medical workup become even more demanding. The differential diagnoses are vast and treatment limited due to increased susceptibility to neuroleptic-induced parkinsonism. In this case of an older bipolar patient with difficult-to-manage mania and catatonia, the use of neuroimaging allowed us to establish a clear diagnosis of Lewy Body dementia and modify her pharmacotherapy accordingly and effectively. Familiarizing ourselves with the utility of the dopamine transporter scan (DaT) provides the psychiatrist another tool within their diagnostic toolbox.

Patient is a 71-year-old female with bipolar illness, who over the last few weeks had become more hyper-religious and grandiose with visual hallucinations and minimal sleep. She practiced hula hoop past bedtime, reported seeing explosions of light from her spiritual third eye, and laughed hysterically at night while disrobing and urinating at random. Her outpatient provider started olanzapine 2.5mg at night with an additional 2.5mg twice a day as needed for agitation. However, after taking this for a few days, she became more combative and psychotic. She presented to the local emergency department, where she was psychiatrically admitted.

Patient’s past history was significant for a similar presentation six month earlier, during which she was also admitted. During that admission, medical investigations including serum levels of thyroid-stimulating hormone, rapid plasma reagin (RPR), vitamin B12, folate, vitamin D, CT head, MRI brain, and electroencephalogram (EEG) were unremarkable. A trial of lithium 450mg twice a day and depakote 500mg twice a day was not effective. Patient was given risperidone 0.5mg twice a day as acute treatment for mania, but this led to her developing catatonia that resolved with lorazepam. She was discharged on low dose lorazepam. Donepezil 5 mg/day was started for cognitive decline as she scored an 8/30 on a Montreal Cognitive Assessment (MOCA) test, but the patient was non-compliant with this medication after discharge. Early in life, she had experienced a few but mild mania-like episodes with magical thinking, auditory and visual hallucinations, but family had always managed to provide sufficient support, without need for hospitalization or prolonged treatment. Family history was significant for bipolar disorder in her two brothers, one sister and one nephew. Medical history was remarkable for hypertension, syncopal episodes secondary to orthostatic hypotension, and urinary retention.

Upon admission, she was found to have a urinary tract infection, which was treated. Despite that, her behavioral symptoms persisted. Patient again developed catatonia, which did not respond to lorazepam (2mg IV three times a day) but resolved after six Electroconvulsive therapy (ECT) sessions. Neurology was consulted and found her to have mild parkinsonism, including mild hypomimia, hypophonia, and mild bradykinesia. A dopamine transporter scan (DaTscan) was performed and showed decreased uptake of DaT tracer bilaterally in putamen, consistent with degeneration of the nigrostriatal system (Figure 1). A provisional diagnosis of Lewy Body dementia (LBD) was made. She was restarted on donepezil 5 mg daily; carbidopa/levodopa 25/100 mg was added later. Her bipolar medication was changed to quetiapine 25mg at night. On this regimen, she has been stable since discharge, exhibiting gradual cognitive decline and mild episodes of depression. 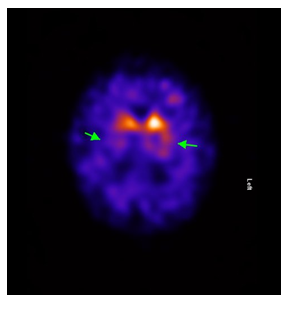 This case is characterized by the presentation of difficult to treat manic-like symptoms in an older bipolar patient, who was subsequently found to have emerging lewy body dementia. Her refractory neuropsychiatric symptoms prompted the team to approach the patient with a wide differential of etiologies for her symptoms. There is literature that supports that patients with bipolar disorder have a higher risk for developing parkinsonism, which can account for some of her motor findings. Known as the dopamine dysregulation hypothesis, this risk is elevated by repeated cycling through manic episodes [5]. However, the patient did not suffer from bouts of severe mania earlier in life that could have resulted in dopamine instability [5]. Late-onset bipolar disease was also considered as being contributory, but her strong family history of bipolar illness, mania-like episodes earlier in life and lack of white matter hyperintensities on imaging did not support the diagnosis of late-onset bipolar disease as the sole explanation [1] [3] [13] [17].

In exploring the possibility of latent neurocognitive disorder in our case, there have been reports of catatonia being the initial presenting symptom of LBD [6] [19]. Additionally, LBD patients are known to have neuroleptic hypersensitivity, and her repeated catatonic episodes could in part have been worsened by antipsychotics with high D2-blocking affinities (risperidone and olanzapine) [10].

Current diagnosis of LBD includes both clinical features (fluctuating cognition, recurrent visual hallucinations, spontaneous parkinsonism) and diagnostic biomarkers, divided up into indicative and supportive categories [9][12] [15] [20]. One indicative biomarker includes reduced dopamine transporter uptake in basal ganglia by dopamine transporter as demonstrated by a positive dopamine transporter scan (DaT scan) [9]. DaT scan is a relatively more recent neuroimaging modality increasingly used in diagnosis of Parkinson’s disease (PD). In LBD, patients also develop parkinsonism from loss of nigrostriatal neurons within the basal ganglia, similar to PD [7] [16]. The utility of DaT imaging in distinguishing LBD from Alzheimer’s disease is well-established, with sensitivity of 78% and specificity of 90% [8].

The management of patients with LBD is complex, requiring a comprehensive treatment program with multidisciplinary approach, as well as caregiver education and support. There is no known treatment to slow the progression of the disease. Acetylcholinesterase inhibitors have been shown to improve patient’s activities of daily living, cognitive function and behavioral disturbances [8]. However, few alternatives exist. Otherwise, clinicians, patients and families have very limited options particularly when hallucinations and delusions are distressing or when they contribute to behaviors that put patients and family members at risk [2] [11] [12]. Low-dose quetiapine is widely used and may be relatively safer than other antipsychotics, but a small placebo-controlled clinical trial in LBD was negative [14]. There is a positive evidence base for clozapine in PD psychosis, but efficacy and tolerability in LBD have not been established [18]. Newer drugs targeting the serotonergic system, such as pimavanserin used in PD psychosis hold promise, and we await further studies in LBD [4].

This case highlights the challenges of diagnostic dilemmas when faced with confounding neuropsychiatric symptoms. Judicious use of neuro-imaging can aid in diagnostic clarity and lessen patient burden of ineffective treatments. Familiarizing ourselves with the utility of these neuroimaging studies and collaborating in an interdisciplinary fashion become more important in assessing the growing number of mentally ill patients with medical comorbidities.