Background: Tardive Dyskinesia is described as a movement disorder that can be caused by the prolonged use of antipsychotics. It is a permanent condition that affects quality of life. However, studies on TD among psychiatric patients in Ethiopia are limited. The objective of this study was to determine the prevalence and associated factors of Tardive dyskinesia among psychiatric patients on first-generation antipsychotics at Jimma University specialized hospital (JUSH) psychiatric clinic, Jimma, South west Ethiopia.

Literatures indicated various prevalence of TD. A meta-analysis study revealed that 6.5 % of patients who were treated with first-generation and predominantly high-potency antipsychotic agents, such as haloperidol or fluphenazine met diagnostic criteria for TD [3]. The cumulative incidence of TD after antipsychotic drug exposure of 1, 5, and 10 years was 5, 27 and 43 percent, respectively [7]. Studies from non-western countries, including Africa are sparse. The study in African Caribbean patients on long-term antipsychotic treatment, showed that in patients with a mean antipsychotic use of approximately 18 years, the yearly incidence rate of TD was 10.2% (95% CI = 7.7 to 13.5) [8]. Several factors in relation with drug treatment have been identified as contributing to the risk of developing TD includes: age, psychiatric diagnosis, gender, organic brain damage, negative symptoms in patients with schizophrenia, antipsychotic dose, duration of treatment, the number of drug free intervals and the history of acute extra-pyramidal side effects [1, 9].

In spite mental health problem was included in national health policy of Ethiopia, interventions for them are limited. One of the main reasons behind is lack of data on the extent of the problem. Search for literatures revealed, there were very limited published data that investigated the prevalence and associated factors of first-generation antipsychotics induced TD in Ethiopia. So, our study result will add valuable points to or strengthens the knowledge about the prevalence and associated factors of tardive dyskinesia in second world countries including Ethiopia. Therefore, the objective of this study was to determine the prevalence and associated factors of Tardive dyskinesia among psychiatric patients on first-generation antipsychotics at Jimma University specialized hospital (JUSH) psychiatric clinic, Jimma, South west Ethiopia.

The study was conducted from Jun 21 to July 5, 2016 at Jimma University Specialized Hospital (JUSH), Psychiatric clinic to assess the prevalence of TD and associated factors. Jimma University Specialized Hospital is one of the Hospitals in Ethiopia which is found in Jimma city, located 345 km southwest of Addis Ababa. It is a referral center for the southwestern part of Ethiopia, and currently, the only teaching and referral hospital in the southwestern part of the country. Jimma University Specialized Hospital Psychiatric clinic gives both inpatient and outpatient service for psychiatric patients mostly coming from Jimma area as well as patients referred from other health institutions in the southwestern region of the country. Even if majority of the patients come from Jimma area, the hospital give service for patients come from up to 300 km radius from Jimma town in the southwest part of Ethiopia. Generally, it gives services for more than 30 million populations, which served a huge bulk of the community next to Paulos Hospital in Addis Ababa Ethiopia concerning Psychiatry health facility.

All Psychiatric patients on first-generation antipsychotics who were attending follow up at Jimma University Specialized Hospital, Psychiatric clinic outpatient department (OPD) during the study period and fulfill the inclusion criteria.

2.4.1 Inclusion criteria: All psychiatric patients who were on first-generation anti-psychotic drugs treatment at least for 6 months.

2.4.2 Exclusion criteria: Psychiatric patients whose abnormal involuntary movements were induced by other reasons like infections and seizure were excluded;

Using single population proportion formula and taking the prevalence of antipsychotic induced movement disorders (Tardive Dyskinesia) from the study conducted at Amanuel mental specialized hospital, Addis Ababa, Ethiopia [1] which was 11%, with 95% confidence level and marginal error of 5% the final sample size was 151 individuals. Simple random sampling technique was used to select the study participants. From a total of 912 psychiatric patients who were taking first-generation antipsychotics and on follow-up at Jimma University specialized hospital, psychiatric clinic, we collected their card number from card room and we selected the total study participants (151 individuals) using simple random sampling technique by lottery method.

Data were collected by four (4) experienced psychiatric nurses using interviewer administered structured questionnaire and research criteria suggested by Schooler and Kane. The questionnaire used was Abnormal Involuntary Movement Scale (AIMS) which is a rating scale designed in the 1970s to measure involuntary movements known as tardive dyskinesia (TD) [10]. The AIMS test has a total of twelve items rating involuntary movements of various areas of the patient's body. These items are rated on a five-point scale of severity from 0–4. The scale is rated from 0 (none), 1 (minimal), 2 (mild), 3 (moderate), 4 (severe) and the entire test performed within ten (10) minutes for each patient. For the diagnosis of Tardive dyskinesia (TD), research criteria suggested by Schooler and Kane [11] were used and they are as follows: 1. At least 3 months of total exposure to ant-dopaminergic medicinal products, 2. Exclusion of other reasons for involuntary movements, and 3. A minimum global rating of “mild”(i.e. 2 or more on AIMS) was used.

Before data collection time the data collectors were trained by principal investigators on the objectives of the study and how to identify Tardive Dyskinesia in accordance with Abnormal Involuntary Movement Scale (AIMS) for Tardive dyskinesia.

The Data were analyzed using SPSS software program version 20. In order to determine association between TD and independent variables, we employed Logistic regression analysis. Characteristics of study population were described by descriptive statistics. Odds ratio with 95% confidence interval was calculated to assess the association and statistical significance. Those variables which were found to be significant in the bivariate analysis with a p-value <0.05 were retained for further multivariate logistic regression analysis to control for potential confounders and to predict independent factors associated with TD.

To maintain the quality of the data, data collectors were trained on how to approach respondents, how to collect and fill all the necessary data and on different variables which are used in the study. Meanwhile, the data collectors were supervised by the principal investigator and One week before the actual survey pretest was carried out among patients with similar socio-demographic characteristic and using similar rating scale which was, Abnormal Involuntary Movement Scale (AIMS) for Tardive dyskinesia. The pretest was conducted at Jimma University Specialized Hospital, psychiatric clinic on 5% of the total sample size and necessary modification was done before being applied on the study subject. Also, the result of pre-test was not included in the final result of the study. Concerning inter rater reliability of data collectors, only 4 experienced psychiatric nurses collected the data under close supervision of the principal investigator.

2.10.2 Current alcohol, Khat, cigarettes and caffeine use: Defined as the proportion of individuals who used these substances at least once during the last 1 month preceding the study [12].

Ethical clearance was obtained from the Research Ethical Review Board of Jimma University, institute of health, and the study was performed according to the declaration of Helsinki. The respondents were informed about their right to refuse or agree to participate in the study and written informed consent was obtained from every participant before the start of the data collection.

Majority of the total participants were found within the age category of <30 years (Figure 1) and 79.5% had the diagnosis of schizophrenia and 47% had gone 5-9 years with their psychiatric illness. The 38.4% of patients were using chlorpromazine and 49% of participants took their treatment drugs for more than 5 years and the majority (74.8%) of the patients reported as they were using caffeine (Table 2). 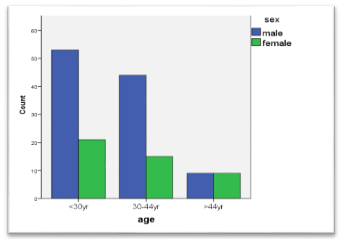 Figure 1: Age and sex of psychiatric patients who were on first-generation antipsychotics at JUSH psychiatric clinic, 2016.

This study investigated the prevalence and associated factors of Tardive dyskinesia (TD) among psychiatric patients on first-generation antipsychotics at Jimma University specialized hospital (JUSH) psychiatric clinic, Jimma, South west Ethiopia. The prevalence of TD in the current study was 14.6% with the range between 10.76% and 18.4%.

Our study revealed that patients who had smoked cigarettes at least once during the last one month were 1.4 times more likely to develop TD as compared to patients who were not smoking cigarettes during the last one month (AOR 1.4, 95% CI: 2.6, 7.8) and this was similar with the result of previous studies which showed the prevalence of TD was significantly higher among smokers than non-smokers [15]. Out of the first-generation antipsychotics included in this study, Haloperidol, chlorpromazine, and thioridazine are metabolized by CYP enzymes except trifluoperazine which is metabolized by UDP-glucuronosyltransferase1A4. Even so, Smoking is associated with induction of CYP1A2, the study in Chinese revealed that there is no association between the C→A genetic polymorphism of CYP1A2 and TD [15]. Contrary to our study result, a study conducted in the eastern cape of south Africa showed that a history of smoking was not associated with an increased or decreased risk, although fewer subjects with TD were smokers and they had smoked for fewer years [16].

In our study patients who were in the age category > 45 year were more than four times more likely to develop TD as compared to patients who were found in the age category of <30 year (AOR 4.5, 95%CI: 9.7, 20.4) and it is in line with the results of many previous studies which revealed that the prevalence of TD is high among older patients [1, 9, 17-19]. This result indicates that whenever the professionals prescribe first-generation antipsychotics, they have to consider the patients’ age and appropriately prescribe the medications as described in prescription guidelines. For instance, our study result showed that one of the associated factors for TD is getting relatively high dose of medications especially chlorpromazine. Therefore, the professionals could consider the patients’ age and adjust the dose in order to prevent the TD.

The study has some limitations including: it was cross-sectional study and cannot show the cause-effect relationship between Tardive Dyskinesia and independent variables and also the independent factors included in this study were not comprehensive enough. Questions about some variables like current substance use (alcohol, Khat and cigarettes) are sensitive issue and social desirability bias is possible.

A considerable number of psychiatric patients were suffering from first-generation antipsychotics induced TD. Age, current smoking cigarettes and chlorpromazine equivalent dose were found to be significantly associated with first-generation antipsychotics induced TD. The study finding will provide information to form rational foundation for prevention and planning to bring change in contributing factors for developing TD. Also, the result could serve as base line information for further study. The study recommended that stakeholders should consider and appropriately address these statistically identified associated factors in order to reduce/prevent antipsychotics induced TD. Also, it is beneficial if professional care givers give attention for patients who are sensitive to antipsychotics like old age patients during treating them.

We would like to acknowledge Jimma University, institute of health for financial support of our study from data collection to analysis and finally we thank the study participants, data collectors, and supervisors.