2Department of Pediatrics, The George Washington University School of Medicine and Health

Hyperbilirubinemia is one of the most common diagnoses leading to hospital admission in the newborn population.

Conclusion: G6PD, while known to be a relatively benign condition, was associated with a risk of receiving exchange transfusion in jaundiced newborns. Newborns with severe jaundice who were exclusively breastfeed were less likely to receive exchange transfusion.

Neonatal hyperbilirubinemia, or jaundice, is one of the most common diagnoses in the newborn population. Approximately 60% of term and 80% of preterm infants develop jaundice within the first week of life [1]. While the majority of jaundice cases are physiologic and benign, a subset of newborns will develop severe jaundice (>20 mg/dL) requiring medical intervention and hospitalization [2-4]. With the American Academy of Pediatrics’ 2004 implementation of universal bilirubin screening guidelines, a decrease in cases of severe neonatal hyperbilirubinemia has been seen in some units [5, 6]. However, despite these guidelines, admissions for severe hyperbilirubinemia do continue to occur with high risk of bilirubin-induced neurologic dysfunction [5, 7-11].

The mainstay of treatment for unconjugated hyperbilirubinemia continues to be intensive phototherapy with an irradiance in the 430- to 490-nm band [12]. Many hospitalized infants will receive additional interventions including but not limited to intravenous hydration, intravenous immunoglobulin, and/or exchange transfusion [1, 12]. Due to increased awareness and earlier identification of hyperbilirubinemia, exchange transfusions have become a far less common procedure in developed countries [13]. Despite their rarity, exchange transfusions remain the standard of care for extreme hyperbilirubinemia poorly responsive to phototherapy or associated with neurologic impairment [4]. While neurologic risk factors are widely recognized (prematurity, hemolytic anemia, glucose-6-phosphate dehydrogenase deficiency, sepsis, acidosis, hypoalbuminemia), it remains challenging to predict which infants will ultimately receive exchange transfusion and/or demonstrate clinical signs of bilirubin-induced neurotoxicity [14-15].

A non-experimental, descriptive, retrospective study was performed. The population sample included all neonates with a primary diagnosis code of hyperbilirubinemia admitted to the Children’s National Hospital NICU in Washington, DC between January 1, 2014 and December 31, 2018. Patients were identified using the Children’s Hospital Neonatal Database. Hospital electronic medical records were reviewed by a single reviewer for patient characteristics including gender, race/ethnicity, gestational age, day of life on admission, gestational age and birth weight. Characteristics of neonates receiving exchange transfusion (ET) were compared to those who did not receive exchange transfusion (NET). Hyperbilirubinemia admission risk factors including peak bilirubin, history of breastfeeding, ABO incompatibility, and glucose-6-phosphate dehydrogenase (G6PD) deficiency were reviewed and compared between groups. Medical records were also reviewed for documentation of acute bilirubin encephalopathy and short term outcomes among the exchange transfusion group. Distribution of frequencies were evaluated using Fisher's Exact, ANOVA, and Kruskal-Wallis analyses. The study was approved by the Children’s National Hospital Institutional Review Board as Exempt research. It was performed in accordance with the Declaration of Helsinki. 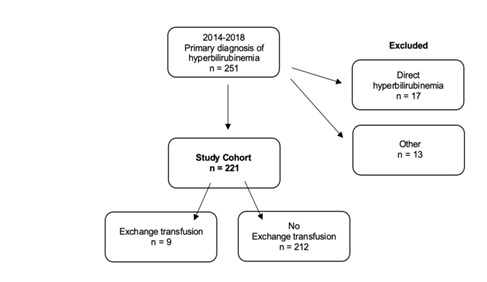 Median age on admission was 4 days (interquartile range 4–6 days), and 55.7% were male. Median gestational age and birth weight were 39 weeks and 3175 grams, respectively. Of all neonates admitted with hyperbilirubinemia, 40.7% were Black, approximately one quarter (24.0%) were White, and 13.6% and 14.0% were Asian and Hispanic, respectively. There was no statistical difference in admission age, sex, gestational age or race and/or ethnicity across ET vs. NET groups. Patients who received exchange transfusion had lower median birth weights than patients who did not receive exchange transfusion [p=0.02] (Table 1).

Median peak bilirubin was 21.4 mg/dL (interquartile range 19.3 – 23.7 mg/dL) with a significantly higher peak bilirubin in ET patients vs. NET patients [p<0.0001]. Seven out of nine (78.0%) patients in the ET group had a peak bilirubin greater than or equal to 25 mg/dL. Five patients were under or equal to 3 days of age with a peak bilirubin ≥25 mg/dL. This patient subset was more likely to receive exchange transfusion [p=0.0005]. Approximately two thirds (67.9%) of admitted neonates were exclusively breastfed prior to admission. Exclusively breastfed infants were significantly less likely to receive exchange transfusion [p=0.01]. Approximately one quarter (24.4%) of admitted patients were identified as having ABO incompatibility. There was no significant difference in ABO incompatibility across ET vs NET groups. 5% of patients were identified as having G6PD deficiency either during or after admission. Patients with G6PD deficiency were more likely to receive exchange transfusion [p=0.0004] (Table 2).

Nine patients received exchange transfusion over the 4-year period. The median gestational age for this subset was 38.3 weeks with a median peak bilirubin of 31.4 mg/dL. Of the 9 patients who received exchange transfusion, 3 patients had clinical findings consistent with acute bilirubin encephalopathy including seizures and evidence of cerebritis on imaging. One out of the 3 patients with neurologic findings died secondary to E. coli sepsis and had confirmed ABO incompatibility. The other two patients with acute bilirubin encephalopathy had G6PD deficiency and presumed culture negative sepsis, respectively. Eight out of the 9 patients had laboratory evidence of severe hemolysis with etiologies including ABO incompatibility (2 out of 8), G6PD deficiency (4 out of 8), Anti-E alloimmunization (1 out of 8), and one with an unclear cause of hemolysis. Three out of the 9 patients received IVIG prior to exchange transfusion. One patient had presumed culture negative sepsis with cerebritis and seizures, as noted above. Two out of the 9 patients were exclusively breastfed.

Consistent with previous literature, glucose-6-phosphate dehydrogenase (G6PD) deficiency was identified as a significant risk factor for severe unconjugated neonatal hyperbilirubinemia [2, 5, 16]. As demonstrated by Isa et al. in Bahrain with a high prevalence of G6PD deficiency, neonates in our study with G6PD deficiency were more likely to receive exchange transfusion [8]. G6PD is also more prevalent in the District of Columbia population and has therefore been included on universal newborn screening [17]. The mechanism is often attributed to early onset hemolysis in the setting of oxidative stress during delivery and/or other perinatal events. Despite this significant finding, utilizing the diagnosis of G6PD deficiency for hyperbilirubinemia clinical decision-making remains difficult. Most infant newborn screen results have not resulted at time of admission, and G6PD status is therefore often still unknown. It is important to remember, however, that G6PD remains a risk factor for both hyperbilirubinemia and neurotoxicity. An infant’s G6PD status should always be considered.

Breastfeeding is a well-known risk factor for unconjugated hyperbilirubinemia. Jaundice associated with breast milk or breast feeding is generally benign and rarely exceeds 25 mg/dL [1]. Perhaps predictably, exclusively breast fed infants in this study were significantly less likely to receive exchange transfusion. This subset included neonates with either breast milk or breastfeeding jaundice, both common entities. Due to presumed increased enterohepatic circulation and/or caloric deprivation, the majority of these infants improved with phototherapy, formula supplementation and/or intravenous hydration. It is important to note that despite significantly elevated bilirubin levels on admission (≥20 mg/dL) resulting in NICU admission, this may be a subset of patients for whom general pediatric floor admission could be appropriate due to lower risk of more significant high-risk interventions such as exchange transfusion.

In this study, 6 out of 9 patients (66.7%) who received exchange transfusion were documented as Black race. While our specific hospital in the District of Columbia serves approximately 60% Black or African American patients, this should still be noted as significant. It is consistent with previous observations that while black infants may have a lower risk than white infants of developing total serum bilirubin levels >20mg/dL, they appear to have greater risk of developing levels ≥30 mg/dL [18]. The reason for this association is unclear, however, it remains important to note the association with G6PD deficiency in these infants and the higher risk of G6PD deficiency among male African-American infants [2].

Similar to Wolf et al, we evaluated the use of IVIG prior to exchange transfusion. One third of infants in our study who received ET also received IVIG. This differs from data in a recent large cohort study in which only 14% of ET infants received IVIG, although increasing use over time was noted. Historically, the use of IVIG in preventing ET has not been systematically recommended due to insufficient evidence [19]. However, recent studies have demonstrated increasing use of IVIG as a primary intervention for alloimmune hemolytic disease and further analysis remains important for optimizing clinical outcomes [13].

The limitations of this study are important to consider. Exchange transfusions occur infrequently making them challenging to study. The power of this study is therefore limited by discrepant sample sizes. Similarly, our study does not include data on long-term developmental outcomes, an important piece of evaluating infants with severe hyperbilirubinemia and/or bilirubin-induced neurologic dysfunction. It remains valuable, however, to assess risk factors for severe hyperbilirubinemia within both individual institutions and the larger newborn population as preventable neurologic complications continue to occur [20]. We must remain vigilant with clinical recognition and rapid transition to treatment for high risk infants. Similarly, exchange transfusions are not without their own risk, and it is imperative that we review the rare cases associated with one of our most common neonatal diagnoses.

Hyperbilirubinemia remains a common diagnosis leading to hospital admissions early in life. Severe hyperbilirubinemia continues to deserve our attention due to significant morbidity and mortality associated with bilirubin-induced neurotoxicity. In our study, G6PD was associated with an increased risk of receiving exchange transfusion in jaundiced newborns. Notably, two thirds of patients who received exchange transfusion were Black race. Newborns with severe jaundice who were exclusively breastfeed were less likely to receive exchange transfusion. Future studies should continue to evaluate cases of severe hyperbilirubinemia so that we may continue to work toward optimizing outcomes for these high risk infants.

The authors have no competing financial interests in relation to the work described.

No funding was received for this research.

The authors wish to thank the neonatal-perinatal fellowship program clinicians and educators at Children’s National Hospital for their support of this project and research.