Background: Progesterone is essential for establishing and maintaining a pregnancy. However, premature atresia of the corpus luteum (CL) or sub-optimal progesterone secretion after ovulation may result in the decreased ability to establish or maintain a pregnancy. The current limitations of serum hormone testing fail to give a complete picture of progesterone production across the luteal phase required for pregnancy.

Results: Of the 185 enrolled women, 172 had complete cycles. Of the 172 women who demonstrated complete cycles, 54 (31.4%) women reported pregnancies. Thirty-five (64.8%) of these pregnancies resulted from a PdG positive cycle with a miscarriage rate of 14.3% (5/35). Nineteen pregnancies (35.2%) resulted from PdG negative cycles with a miscarriage rate of 89.5% (17/19). The association of a negative or positive cycle with pregnancy outcome was significant (two-sided p=0.0001). Positive PdG cycles are associated with increased pregnancy rates and lower odds of a first-trimester pregnancy loss.

Conclusion: A consideration for luteal phase support with progesterone or ovulation induction in women with negative PdG cycles can be of benefit to increase pregnancy rates. Furthermore, the use of LH and PdG testing prior to conception can be used as a screening tool to potentially identify women who are at risk of subfertility and at a higher risk of first-trimester pregnancy loss related to low progesterone.

The luteal phase of the menstrual cycle is the period of time from ovulation to pregnancy or menstruation. It is initiated with a surge of luteinizing hormone (LH) triggering ovulation; the process by which the dominant follicle ruptures and releases an oocyte to begin the journey to the endometrium. The remnants of the dominant follicle then transform into the corpus luteum, which begins to secrete progesterone. In this way, progesterone dominates the latter half of a women’s menstrual cycle. Progesterone prepares the endometrium for implantation and is essential for the maintenance of a healthy pregnancy [1].

The corpus luteum continues to secrete progesterone until the placenta takes over this role, usually between 6-10 weeks of gestation. The maintenance of serum progesterone levels is essential to the health and success of a pregnancy [2]. However, if endogenous progesterone production is insufficient, the resulting lower serum progesterone levels during the luteal phase are associated with implantation failure and early miscarriage [3]. This is sometimes referred to as luteal phase defect (LPD) and was first mentioned as a possible cause for infertility in a 1949 study conducted by Georgeana Seegar Jones Y et al [4].

Despite over 70 years of research, there is still a lack of consensus regarding the etiology and diagnosis of LPD [5]. Clinically, LPD manifests as a luteal phase lasting less than 10 days and/or prolonged spotting before the expected day of menstruation. LPD has been associated with early pregnancy loss and infertility [6].

Traditionally, serum progesterone levels are measured during the mid-luteal timeframe, approximately 7 days past ovulation. It has been suggested that optimal serum progesterone is considered to be >10 ng/mL [6]. However, the biggest limitation of progesterone monitoring is the pulsatile release from the corpus luteum, with fluctuations from 2 to 40 ng/mL during 24 hours in the same healthy subject [6]. The frequency and amplitude of these fluctuations are present during the entire luteal phase, making a single value potentially uninterpretable and thus unhelpful in diagnosing or excluding LPD. Recently, pregnanediol-3a-glucuronide (PdG), the urinary metabolite of progesterone, has been proven to be a useful marker for monitoring mid-luteal activity in a non-invasive manner.[7] Pregnanediol-3a-glucuronide tests are a non-invasive solution for hormone monitoring utilizing first-morning urine. Pregnanediol-3a-glucuronide test strips turn positive at a threshold of 5 μg/mL in urine, the equivalent of about 10 ng/mL of progesterone in blood [7] and the associated mobile application can record and interpret the results. The utilization of PdG tests could present providers with a better diagnostic tool to identify ovulation disorders that result in suboptimal progesterone production and provide personalized treatment options to many women struggling to conceive or maintain a pregnancy.

This study was a prospective and observational study that utilized urinary PdG hormone levels to confirm ovulation and used a mobile application diagnostic device to track PdG levels and pregnancy outcomes. The study sought to assess if certain patterns of fertility hormone levels over the whole ovulation cycle correlated with different pregnancy outcomes. The protocol, informed consent form, and all patient materials were approved by the Solutions IRB. The study was conducted in compliance with ICH GCP, the Declaration of Helsinki, and applicable laws and regulations.

Study participants were recruited from a database of established users currently using the mobile application to log their LH and PdG results. Women were eligible for study participation if they were over the age of 18 and had tracked at least one cycle utilizing the Proov® diagnostic device and mobile application. Subjects were invited to participate in this clinical trial by email. All participants were provided with an informed consent form prior to study participation. Only subjects who provided informed consent were registered into the study. Subjects were compensated $10 for their time.

Proov® is a Class I in vitro diagnostic device cleared by the FDA for identification of urinary PdG and thus confirming ovulation at home. The urine test strips can be paired with a mobile application to facilitate recording of daily results. The mobile application has a user interface that captures, interprets the test strip, and reports the hormone concentration. The device measures the level of luteinizing hormone (LH) and pregnanediol-3-glucuronide (PdG) in urine to predict and confirm ovulation. A rise in PdG values above 5 μg/mL following an LH surge confirms the occurrence of ovulation and the beginning of the luteal phase. The number of days with sustained PdG values above 5 μg/mL were recorded. Subjects without a PdG raise were categorized as anovulatory. Study participants were instructed to conduct daily testing with first-morning urine for up to 5 cycles. All women used LH tests (sensitivity of 25 mIU/mL) and PdG tests (sensitivity of 5 μg/mL) and standardized LH and PdG testing instructions. Our PdG analysis used daily, first-morning urine samples on 4 consecutive days, collected between 7 and 10 days past peak fertility, where peak fertility was considered to be the day of the first urine LH value of 25 mIU/mL or above. The first day of a cycle was defined as the first day of bleeding occurring during menstruation. A complete cycle was considered when a peak day (LH positive test) was identified, and all 4 days of PdG testing (7-10 days after peak day) were completed. Pregnancy was defined as a positive home pregnancy test. Miscarriage is defined as a pregnancy that was lost prior to the 14th week of gestation. Subjects were free to share their results with their physicians to guide pharmacologic therapy or gain insight into infertility concerns.

Data was analyzed by Fisher’s exact test. We anticipated that at least 42 subjects would need to be enrolled for the study to have 80% power with a type one error rate of 0.05 to detect a difference in pregnancy rates. The historical incidence rate of pregnancy was 20% per cycle and the expected incidence rate in the study group was anticipated to be 5%. All continuous variables were summarized as means with their associated range. Categorical variables were reported as absolute values and percentages.

A total of 185 women were enrolled in the study between February and August 2021. Of these women, 183 reported that they were actively trying to conceive and the other two were not actively avoiding or trying (Table 1). Table 1 details the demographics of the study population. Of note, there were 3 participants that were aged 45 or above, all actively trying to conceive. One did not report a pregnancy during the study time period while the other two did report pregnancies. Only 169 women enrolled reported both height and weight, and the average recorded Body Mass Index (BMI) was 28.7, ranging between 18.1 and 54.9. Of these women, 62 (36.7%) were classified as obese, with a BMI exceeding 30. At the time of study registration, 53 participants were already diagnosed as infertile. Additionally, 64 of the respondents reported trying to conceive for over 6 months. Therefore, 117 (68%) of the respondents were considered to be subfertile. A total of 328 cycles were tracked from 178 women. Table 2 details the number of cycles tracked per participant (Table 2).

* Some subjects identified as more than one race. 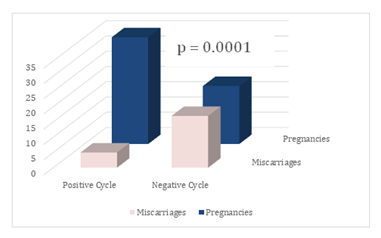 Traditional predictors of fertility such as age and cycle regularity were not found to directly impact pregnancy outcomes. However, this study demonstrates a strong association between PdG cycle status and pregnancy outcomes. Urine PdG levels following ovulation at or above 5 μg/mL sustained for over 2 days were associated with a higher rate of clinical pregnancies. We observed that pregnancies resulting from a positive cycle were significantly less likely to result in a miscarriage. While age and AMH levels were not associated with negative PdG cycles, an association with BMI was significant. More specifically, obesity was a significant risk factor of insufficient progesterone elevation. While infertility and subfertility are well documented in obese women[9], this new information may contribute to the overall understanding of the underlying pathology and possible treatment options. In this study, daily hormone monitoring helped providers manage fertility medications and identify causes of infertility. As a result of hormone monitoring, 37 women were started on pharmacologic therapy and 14 reported successful pregnancies after the start of therapy. Eight of these women required only mid-luteal progesterone support. While this study did generate information for further hypothesis testing, it does have some weaknesses that could be addressed in future studies. About a quarter of the study population was on one or more fertility medications at the time of study registration. This could have caused the under-identification of negative cycles. As a result, a full assessment of who is at greatest risk of negative cycles was not possible. In addition, only one complete cycle was tracked for about 48% of the population. This resulted in an inability to understand luteal health trends in individuals and across the full population. Another weakness noted is the short duration of the hormone tracking. Many women had identified that they had a negative PdG testing cycle and were prescribed ovulation-inducing medication at the start of the next cycle. Further studies that track women for more cycles will be needed to fully assess the ability of certain medications to correct for potential luteal phase insufficiency. Further research should be conducted to better understand the frequency of negative cycles as tested via urinary PdG across various populations and their impact on pregnancy outcomes. This research should also seek to more fully characterize populations more likely to have negative cycles to make it easier to identify patients who may benefit from ovulation induction or progesterone supplementation.

At-home urinary PdG testing over four days offers a non-invasive method of monitoring mid-luteal activity and can be used as a marker of luteal health. It is a more patient-friendly way to assess for progesterone deficiency and provides a more complete picture of luteal function when compared to a brief snapshot of one serum progesterone level. Adding Proov PdG testing to clinical workups for female infertility may augment treatment plans and monitoring during treatment in order to ultimately increase pregnancy rates and decrease miscarriage rates.

We want to thank all the women and men involved in collection of the data analyzed in this work. The protocol, informed consent form, and all patient materials were approved by the ethics committee, chair Ayn O’Reilly, from Solutions IRB (IRB Registration # IORG0007116).

All participants included in the study have consented to participate by written consent.

All authors have given consent for publication.

The design of the study and collection, analysis, and interpretation of data and in writing the manuscript were all funded by MFB Fertility, Inc. the makers of Proov branded of PdG and LH test strips.

A.B. designed and led the study, A.K. performed all the data analysis, J.P, J.K and A.E. provided medical oversight of the trial and helped with study design.

We would like to thank Maddie Barbera, Evyn White, and Oana Gharbi for their thoughtful review and editing of this manuscript.