Background: Wound infection is one of the most prevalent problems associated with surgical therapy, accounting for a large amount of morbidity in gynae-cologic surgical hospitalizations. To avoid potential problems like surgical-site infections and wound dehi-scence, it's critical to care for post-operative wounds properly in the community.

Objective: The objective of the study was to assess the prevalence of wound infection and its management system in gynecological surgery in a tertiary care hospital in Bangladesh.

Method: This cross-sectional study was conducted from January 2019 to December 2020 at Uttara Adhu-nik Medical College & Medical College Hospital, Dhaka, Bangladesh. This study was purposively con-ducted among 220 female patients who were admitted to the obstetrics & gynaecology department with gyn- aecological wounds & their infections.

Conclusion: Optimal surgical wound management is a crucial component of post-operative recovery, and health care practitioners should keep an eye on the progress of acute wound healing, prevent wound problems, and treat them correctly if they occur.

Surgical operations involving the female genital tract are handled by gynaecological surgery services. It also addresses the breasts and pelvic, as well as operations involving the uterus, its appendages, and urinary incontinence repair [1]. Hysterectomy is the most common gynecological procedure; others include tubal ligation, curettage, cystectomy, and salpingec-tomy [1, 2].  Every surgery has a risk of complications; prognosis depends on prompt diagnosis and timely management [3]. Gynaecological surgeries can be diverse and include surgical site infections (SSIs), fever, upper respiratory infections (URI), urinary rete-ntion, urinary tract infections (UTI), and abdominal distension [4]. In such cases surgical site infections account for 0.5% to 15% of the total postoperative complications as most commonly encountered ones [5]. According to the WHO (World Health Organi-zation report, it complicates 11.8 out of 100 surgical procedures in low as well as middle-income countries [6].  Acute wounds usually progress through an orderly sequential trajectory of hemostasis, maturation, proli-feration, and remodeling [7]. After initial dermal tissue injury, hemostasis by platelet aggregation, fibrin clot formation, and subsequent coagulation pathways [8]. Early detection of wound complications is crucial to improving patients’ quality of life and reducing hospital readmission [9]. In such cases, if antibiotic therapy is commenced, it should be administered based on the most likely causative organisms as well as the patient’s allergy status, with consideration of local antibiotic resistance [10]. Cleaning of wounds can be performed with potable tap water [11]. Applic-ation of local dressings depends upon the wound characteristics and dressing features, like absorption capacity, adherence, and even cost-effectiveness [12].

A complication is an unintended consequence of surg-ery that has an adverse effect on the patient and would not have occurred if the surgery had been completed according to the procedures [13-15]. Many microbes (germs) reside in and on our bodies, as well as in our surroundings. Our bodies have built-in defenses again-st potentially harmful pathogens. Germs can penetrate the incision that a surgeon creates through the skin during an operation, causing a surgical wound infect-ion. Unintentional or involuntary activities might result in an incident, which is defined as an event or scenario that could have caused or caused unnecessary harm [14, 15]. Surgical complications are a significant issue from a clinical, legal, and public health stand-point because of the financial burden they place on the healthcare system. Surgical problems in gynecological surgery are more common in some populations than others. The result of surgery is influenced by socio-demographic factors, comorbidities, medical history, indications for the procedure, and the surgeon's experience [16]. Because the danger of complications rises with the complexity of the surgical process and the surgeon's experience, accumulating surgical experience combined with preventative procedures can greatly minimize the rate of complications [17].

When compared to laparoscopic, abdominal, and vaginal hysterectomy, patients undergoing robotic-assisted laparoscopic hysterectomy have a signifi-cantly lower risk of re-admission; additionally, the robotic technology has a lower rate of hospital stay and generates less bleeding, according to Martino et al. [18]. Surgical site infections are the most prevalent complication, occurring between 2.2 % and 10% of the time [19, 20], followed by transfusion (4%), pelvic abscesses (1.5%), reoperation (2%), and wound dehiscence (2%) [20]. Wound infection is one of the most prevalent problems associated with surgical treatment of patients, accounting for 8-10% of gynaecologic surgical hospitalizations and causing significant morbidity. From time to time, strategies for preventing wound infections have been proposed [21]. Despite numerous revisions to the protocols for the preoperative, intraoperative, and postoperative mana-gement of the patient, the increased prevalence of wound gape in the postoperative period poses a significant challenge to gynecologists. Given that all tertiary care hospitals adhere to the same basic norms, a cross-sectional study was conducted to determine the prevalence of wound infection and its management system in the postoperative period.

The objective of the study was to assess the prevalence of wound infection and its management system in gynecological surgery in a tertiary care hospital in Bangladesh.

2.5 The procedure for collecting and analyzing data

Data were entered in the computer using SPSS (Statistical Package for Social Science) version 21.0. The level of significance was considered as a “P” value less than 0.05 and double-checked before analysis.

Table 1 showed the demographic characteristics of the participants of the study. Among 220 patients, 28(12.7%) patients were below 20 years old and the maximum number of patients 102(46.3%) were between 20 to 29 years old. Their marital status, residence, live births, number of abortions are stated below. And 116(60%) patients’ socioeconomic status was a middle-class state.  Table 2 showed the status of the morbidity associated with wound infection. In our study, there were 3 types of surgeries classified among patients (Abnormal surgery, vaginal surgery, and combined surgery). The rate of antibiotic prophylaxis was higher (31%) in combined surgery patients, length of hospital stay was higher among vaginal surgery patients, rehospitalization was observed higher (29%) among abdominal surgery patients, and most repeated surgeries were found to be higher (24%) in abdominal surgery patients. Table 3 showed the status of the various coexisting risk factors in wound infection cases. Maximum patients (31.8%) had hypertension and minimum patients (3.86%) had fever on admission. Table 4 showed the hospital stay of the patients is shown. Here, maximum patients (39.4%) stayed 15-21 days. Minimum patients (1.7%) stayed below 7 days in the hospital. Figure IV shows the type of gynecological surgery complications. Here, maximum patients (33%) had operative site infection and minimum patients (6%) had postoperative ileus. 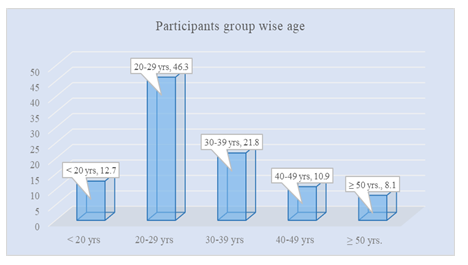 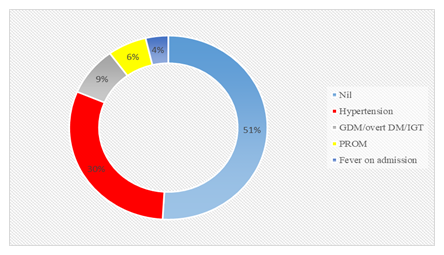 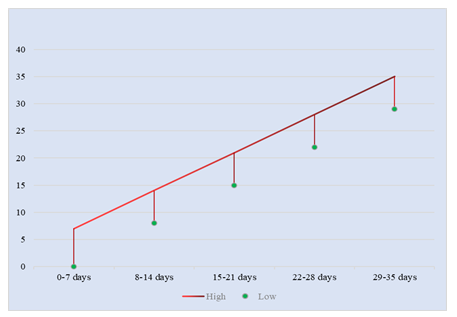 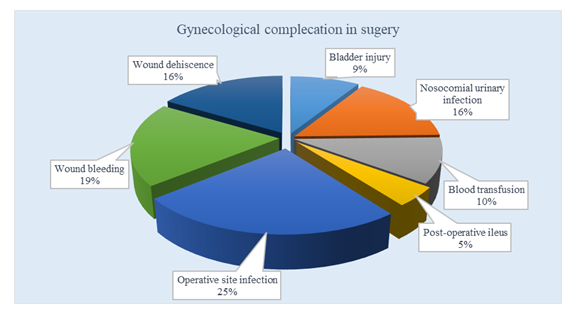 One of the most common consequences of gynae-cologic surgery is wound infection. Its prevalence is linked to the highest rate of reoperation, the longest stay in the hospital, and the biggest cost rise of any postoperative gynaecologic complication [16]. Adeq-uate postoperative surgical wound care is critical for avoiding complications such as surgical-site infections (SSIs), wound dehiscence, and hematomas. General practitioners have a crucial role in managing patients' postoperative wounds in the community, and it's critical to understand the principles of postoperative wound treatment in order to reduce the risk of wound complications. The operating surgeon has a problem in the form of postoperative wound infection. The increasing occurrence of wound dehiscence has harmed the field of surgery's success in terms of developments in surgical methods and the easy availability of surgery as a therapy option. Wound healing is a complicated process that is influenced by both internal and environmental influences. Comor-bidities such as diabetes and hypertension are caused by internal factors. Wound infection, typical suturing procedures, suture materials, and wound care are examples of external variables. Preoperative prepara-tion, postoperative wound care, suture materials, and suturing methods or practice vary from one institute to the next. Varied institutes have different practices when it comes to changing dressings after surgery. The standard procedure is to replace the dressing on the second and third postoperative days. Wound cellulitis and seroma formation are the most common infections. These issues usually appear within the 3-5 postoperative days. Adequate assessment of postsu-rgical infectious morbidity necessitates meticulous follow-up of outpatient records and readmission tracking, which may not occur at the same facility as the main treatment. Antibiotic and antimicrobial prophylaxis for vaginal procedures has been shown to reduce infectious morbidity. Hemself et al. [22] found that only 8% of women undergoing vaginal hyster-ectomy who were administered cefoxitin developed the significant postoperative infection, compared to 57 percent of women who were given placebo in a prospective, randomized, double-blind research. Age, obesity, nutritional status, preoperative medical dis-orders like anemia, diabetes, jaundice, use of steroids, poor intraoperative preparation, emergency or elective surgeries, duration and type of surgeries, postoperative wound site contamination wound infection [18]. A careful examination and meticulous evaluation of the physiological requirements for wound healing will help you understand why certain wounds heal rapidly and others take longer [19]. Appropriate surgical attire and regular hand washing, as well as acceptable theater cleanliness, are thought to be important factors in avoiding infections, according to scientists. Regar-dless of the wound healing mechanism, the goals of post-operative wound care are to ensure that the wound heals quickly, without problems, and with the greatest functional and aesthetic results possible [19]. Wound borders should be well approximated in wounds that are intended to heal through primary healing.

Optimal surgical wound management is a crucial component of post-operative recovery, and health care practitioners should keep an eye on the progress of acute wound healing, prevent wound problems, and treat them correctly if they occur. The prompt asses-sment of the wound, adequate washing and dressing, and early diagnosis and intervention of wound comp-lications are all important aspects of postoperative wound management.