An Atypical Case of Burkitt Lymphoma with Diffuse Peritoneal, Omental and Periportal Invasion

Diffuse peritoneal and especially periportal invasion of Burkitt lymphoma is very rarely seen. We present a case of a 16-year-old boy presenting with abdominal pain and constipation, without improvement after enemas. Abdominal ultrasound revealed a diffuse infiltrating peritoneal mass, omental caking, ascites, and a periportal mass, confirmed by computed tomography (CT). No lymphadenopathies were seen. Biopsy was performed and the diagnosis of Burkitt lymphoma was made. Although very rare, it is important to include lymphoma in the differential diagnosis of diffuse peritoneal and periportal invasion in children, as it can mimic peritoneal carcinomatosis.

Intraperitoneal neoplasms are not frequently seen in children [1]. Peritoneal involvement can be primary or more often secondary to metastasis from extraperitoneal neoplasms, and the differential diagnosis is markedly different from adults. Peritoneal metastasis has been reported in ovarian germ-cell tumors, Wilm's tumor, neuroblastoma, mesothelioma, desmoplastic small round cell tumor, intracranial tumors and lymphoma [1, 2].

Lymphoma is the third most common malignancy in children, broadly separated into two main types: Hodgkin (HL) and non-Hodgkin (NHL). HL is unusual in patients <4 years of age, and typically occurs in older children and adolescents. NHL is more common in children <10 years of age, compared with HL, and represents a heterogeneous collection of lymphoid neoplasms not recognized as HL with the most commonly occurring in children including Burkitt lymphoma (BL) and diffuse large B cell lymphoma [3]. BL is the most common subtype of NHL in children, accounting for 34% of all NHLs diagnosed in childhood, or approximately 7% of childhood cancers in the developed world [4]. It is a very aggressive, rapidly growing B-cell neoplasm, with a reported doubling time of 21 to 24 hours [2, 5]. The mean age at time of diagnosis is 8 years, with children between 5 and 9 years. It occurs more often in boys [4, 5].

BL frequently presents with abdominal pain with abdominal and/or pelvic masses seen in about half of patients at presentation. These masses may be quite large, be single or multiple, and may be necrotic. Extensive mesenteric and retroperitoneal lymphadenopathy is usually present. Involvement of solid abdominal organs, and bowel (causing intussusceptions) can also be seen. Rapidly growing lymphadenopathy in the head and neck region is also common. Less common sites of involvement are the genitourinary tract, bone, skin, bone marrow, and central nervous system. Involvement of the omentum and peritoneum is rare, and when seen, usually associated with lymphadenopathy and ascites [4].

A 16-year-old boy with no relevant medical history presented with abdominal pain and obstipation. Enemas had no effect. Clinical examination revealed a palpable mass in the abdomen. Blood analysis showed an elevated LDH and uric acid. Blood count, erythrocyte sedimentation rate and liver enzymes were normal.  An ultrasound (US) of the abdomen was performed, which showed a diffuse infiltrating peritoneal mass, omental caking and ascites (Figure 1a). There also was diffuse thickening of the small bowel wall. In the liver, a hyperechogeneous periportal infiltration extending along the falciform ligament was seen (Figure 1b). 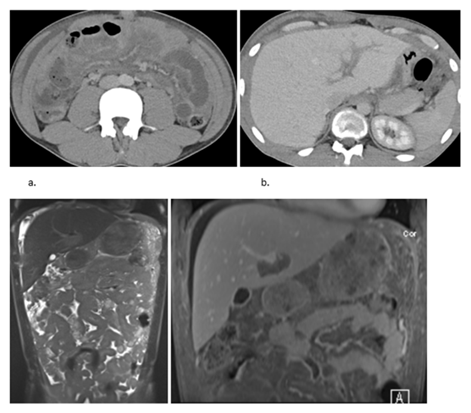 Figure 3: Images obtained during laparoscopic surgery showing (a) extensive omental thickening with multinodular appearance; (b) The falciform ligament is also thickened due to diffuse involvement. 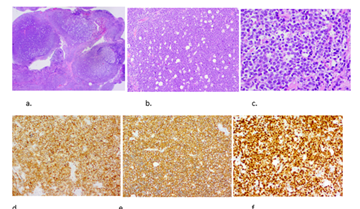 Burkitt lymphoma is categorized into 3 different types by the World Health Organisation (WHO): the endemic, the sporadic and the immunodeficiency-associated form [4, 5, 7]. The endemic type is predominantly found in equatorial Africa and Papua New Guinea. It is associated with Ebstein Barr Virus (EBV) in 95% of the cases [4]. Head and neck involvement is the most common in the endemic form of BL [4]. The sporadic form occurs worldwide [4], and is only associated with EBV in a minority of cases (15%) [4]. The gastro-intestinal tract is the most common site of involvement in the sporadic form of BL, most frequently involving the ileocaecal region [4]. The immunodeficiency-associated form is found mostly in HIV-patients, but can also occur in allograft recipients or patients with congenital immunodeficiencies.

The extent of the disease at presentation is the most important prognostic factor. Children with Burkitt’s lymphoma have a high risk for developing tumor lysis syndrome before or during chemotherapy. A second potentially life threatening condition associated with BL is the pressure effect on vital organs, leading to compartment syndrome [2, 5]. In general, the survival rate for disseminated disease varies between 70 and 80% [5].

Involvement of the peritoneum and omentum is rare and differential diagnosis should be made with other primary and secondary neoplasms of the peritoneum [4, 7, 8]. On CT, diffuse nodularity along the peritoneal reflections is seen. In our case, the disease has progressed to a diffuse, smooth thickening of the peritoneum. Diffuse involvement of the peritoneum is usually associated with widespread inflammation of the bowel and mesenterium. Although infrequent, omental caking, as seen in our case, may also be present [4]. Most commonly, associated conglomerate lymphadenopathies are seen. If there is organ involvement, the gastro-intestinal tract is the most frequent affected organ (typically presenting as an enhancing mass without signs of obstruction), the spleen and liver are also commonly invaded [4]. Periportal involvement without portally located mass or lymph nodes has been described in only a few of cases [7].  Periportal involvement has been described as a possible cause of liver insufficiency [7].

The main differential diagnosis of peritoneal lymphomatosis in children is peritoneal carcinomatosis in neoplasms such as mesothelioma, ovarian tumors, teratoma, desmoplastic small round cell tumor, neuroblastoma, Wilms tumor and lymphoma.  In adults, peritoneal carcinomatosis  is by far the most common diagnosis of diffuse peritoneal involvement, especially in older patients, resulting from spread of primary mucinous tumors - ovarian and colonic origin being the most common, malignant peritoneal mesothelioma, and peritoneal tuberculosis [6]. Malignant peritoneal mesothelioma is a very rare entity. It is important to know that it is not always associated with significant asbestos exposure.  Tuberculous peritonitis can mimic diffuse tumoral peritoneal disease and should be considered when clinically suspicious. If there is peritoneal fluid, it is heterogeneous with multiple septae and loculations. Peritoneal involvement is usually seen as a smooth thickening of the peritoneum with more regular contours [6]. If there is nodular involvement of the peritoneum, it has a more granular appearance (<5 mm tiny nodules). Omental caking can be present.

The differentiation between diffuse peritoneal involvement by lymphoma and these other diagnoses is difficult, and biopsy is often needed. Smooth linear peritoneal involvement, extensive lymphomatous encasement of the bowel with preserved lumen, and thickened, but preserved pattern of the valvulae conniventes are helpful in differentiating a peritoneal BL from other primary peritoneal tumors. Ascites is present in 25% of patients with peritoneal BL [4]. This ascites is commonly non-loculated. However, an accurate diagnosis of peritoneal lymphomatosis is important because of its non-surgical treatment [6]. It has a high responsive rate to chemotherapy (>70%). Definite diagnosis always requires histology.

In conclusion, although very rare, it is important to include lymphoma in the differential diagnosis of diffuse peritoneal and periportal invasion in children, as it can mimic peritoneal carcinomatosis.