An Unusual Presentation of Joubert Syndrome in an Infant: A Case Study

Joubert syndrome (JS) is a rare autosomal recessive disorder which show’s cerebellar vermis hypoplasia with a complex brainstem malformation. Joubert syndrome is characterized by episodes of abnormal respiratory pattern, oculomotor findings, hypotonia, ataxia, developmental retardation. Axial magnetic resonance images of brain show characteristic molar tooth sign. This syndrome is difficult to diagnose clinically because of its variable phenotype. The exact diagnosis is often not made for several years after birth. We report an unusual presentation of Joubert syndrome in a 5 month old boy who presented to the pediatric outpatient clinic with developmental delay, increase in tone of body and abnormal head size. MRI Brain showed molar tooth configuration of superior cerebellar peduncles, the fourth ventricle shaped like a bat wing and hypoplasia of the vermis which resulted in median approach of the two cerebellar hemispheres.

Joubert syndrome (JS) is an autosomal recessive neurological disorder named after Marie Joubert in 1969 [1]. It presents with abnormal oculomotor findings, hypotonia, ataxia, respiratory dysregulation, and developmental retardation owing to abnormalities of the cerebellum and brainstem [2-4]. Classic JS is characterized by the triad of hypotonia, developmental delays, and pathognomic brainstem and cerebellar malformation called the molar tooth sign (MTS) [1, 5]. This clinical entity is underreported with a prevalence of less than 1 in 100,000. Only few hundred cases have been reported worldwide [6]. It is a syndrome with a variable phenotype making it difficult to establish the exact clinical diagnostic boundaries of the syndrome. Even though the clinical features of the disorder are present in the newborn period, the correct diagnosis is often not made for several months or years after birth [7]. The average age at diagnosis is 33 months [8]. The importance of early detection of the syndrome is stressed so that suitable measures can be started as early as possible. Our case is unique because child presented with hypertonia and developmental retardation without any abnormal ocular movements or respiratory dysregulation.

A 5-month-old boy presented to the pediatric outpatient clinic with developmental delay, difficulty in feeding and abnormal head size. He was born at term by normal vaginal delivery with birth weight of 3.5 kg. Perinatal period was uneventful but after that he had difficulty in taking breast milk. Parents also noticed that the child was not able to keep up with developmental milestones. He did not have social smile at 3 months and head control at 5 months of age and was unable to recognize mother. Since last 1 month parents also noticed increase in head size and flexed posture of the child. There was no history of significant trauma, seizure, abnormal breathing pattern or hypotonia. He was born to non-consanguineous parents and suffered no significant perinatal asphyxia. He was the only child of his parents. On examination; he appeared drowsy, intermittent irritable, continuously maintaining flexed posture. He did not interact with mother and don’t had social smile. He had no neurocutaneous markers. Ocular examination was normal except grade 1 ptosis. He showed mild facial dysmorphism in the form of forehead prominence, deep-set eyes, bilateral epicanthic folds. There was no organomegaly. Heart and lungs were normal on auscultation. Motor examination revealed generalized hypertonia with exaggerated tendon reflexes. Head circumference was normal for age. His admission weight was 3.5 kg as he had failure to thrive. He also had supraumbilical hernia. 2D ECHO was done which show left ventricular hypertrophy. The axial T1-weighted and T2-weighted Magnetic resonance (MR) images showed abnormally oriented and thickened superior cerebellar peduncles that resulted in a molar tooth configuration (Figure 1). The more caudal T2- and T1-weighted axial MR images showed the fourth ventricle shaped like a bat wing (Figure 2). Furthermore, T2-weighted axial MR images showed hypoplasia of the vermis which resulted in median approach of the two cerebellar hemispheres but without evidence of a posterior fossa cyst. Based on clinical and magnetic resonance imaging (MRI) findings, diagnosis of Joubert syndrome was made and Parents were counseled. 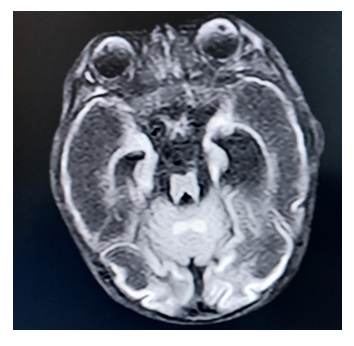 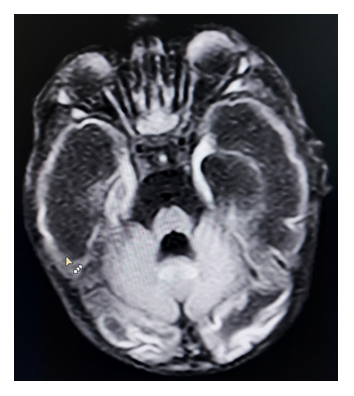 With one or both of the following:

Our patient had developmental delay but he did not have hypotonia, abnormal respiratory pattern and abnormal eye movements.  He had generalized hypertonia which might be due to unnoticed perinatal insult but there was no history birth asphyxia or NICU admission at the time of birth. Associated supratentorial anomalies are uncommon, but cerebral cortical dysplasia and gray matter heterotopias have been reported [9]. Moderate lateral ventricular enlargement due to atrophy has been described in 6–20% of cases [10]. This syndrome is classified into two groups on the basis of presence or absence of retinal dystrophy. Patients with retinal dystrophy have a higher prevalence of multicystic renal disease and these patients also appear to have decreased survival rates compared with those of patients without retinal dystrophy [5]. There was no evidence of retinal disease on ophthalmological examination in our patient.

Molar tooth sign is not specific for JS. Although molar tooth sign and other important clinical features of the JS may be seen in other syndromes, they usually have supplementary prominent features. These include syndromes such as the COACH, Varadi-Papp, Dekaban-Arima, Senior-Loken, Joubert with polymicrogyria, and Malta syndromes. Patients with COACH syndrome have bilateral coloboma, hepatic fibrosis and renal calcification, and in the Varadi-Papp syndrome there is mesaxial polydactyly, Y-shaped metacarpal, cleft lip or cleft palate, lingual hamartomas and vermian hypoplasia. The Dekaban-Arima syndrome is allied with Leber's congenital amaurosis and cystic dysplastic kidneys, whereas the Senior-Loken syndrome is related with Leber's congenital amaurosis, retinitis pigmentosa and juvenile nephronophthisis. In the Malta syndrome, these patients have the molar tooth sign, occipital encephalocele, hydrocephalus, cortical renal cysts with or without coloboma, and Leber's congenital amaurosis. Few patients can have features of JS and polymicrogyria [11, 12]. Developmental outcomes in JS are variable. Steinlin et al. [7] suggested that outcomes in JS can be divided into three courses: first, children who die young; second, patients who survive but are severely developmentally delayed and have a variety of visual and motor handicaps; and third, patients whose developmental quotients fall within the mildly delayed range (70–80). Renal and retinal dysfunction can be progressive. In patients with retinal anomalies, the renal function should be monitored regularly and ultrasonography should be done to detect cystic renal disease [5]. Finally, the diagnosis is important for future procedures that require anesthesia. These patients are sensitive to respiratory depressant effects of anesthetic agents like opiates and nitrous oxide. Hence, the use of these anesthetic agents should be avoided in these patients.