Anterior Urethral Valves (AUV) are a less common cause of lower urinary tract obstruction than Posterior Urethral Valves (PUV). AUV may present with symptoms of mild to severe obstruction and renal impairment at any age. Here we report possibly the first case of AUV presenting as hydrops fetalis. This late preterm infant presented with postnatal presentation of hydrops leading to respiratory failure. There was marked ascites, a left-sided inguinal hernia and hypospadias. Immune and most non-immune causes of hydrops were ruled out. Mild hydronephrosis with poor renal function and dependency on bladder catheterization for urinary output remained. While the ascites gradually improved, the bladder outlet obstruction persisted without evidence for PUV. Voiding cystourethrogram (VCUG) led to suspicion of AUV which was confirmed and managed with cystoscopic valve ablation. We review the physiology, clinical presentations, treatment and outcomes of AUV in the context of a differential diagnosis based on neonatal ascites values.

This late preterm male infant was born at 35 weeks gestation to a healthy primigravid mother after an uncomplicated pregnancy. Antenatal ultrasounds were unremarkable up to 20 weeks of gestation with no further scans done. She presented in preterm labor and an emergency Cesarean Section was performed for breech presentation. A male infant of 4110 g birth weight (>97th percentile, large for gestational age) was born with APGAR scores of 2, 4, and 7 at 1, 5, and 10 minutes, respectively. He was noted to have severe edema and abdominal distension impacting on breathing to the extent that he required emergency intubation. He subsequently was referred to our tertiary Neonatal Intensive Care Unit (NICU) where he required mechanical ventilation for four days. A urinary catheter was inserted to monitor urine output and fluid balance. His physical examination revealed hypospadias and a left-sided inguinal hernia, in addition to severe body wall edema with no other dysmorphic features. Medical work-up ruled out immune and hematologic causes for hydrops with normal hemoglobin (140 g/L), a negative Direct Antiglobulin Test (DAT) and an unremarkable peripheral blood smear. A normal urinary protein/creatinine ratio of 0.093 g/mmol ruled out congenital nephrotic syndrome. Acute toxoplasma gondii, rubella, cytomegalovirus, herpes, syphilis and parvovirus infections were ruled out. Genetic and metabolic work-up included normal echocardiography, skeletal survey, karyotyping and chromosomal micro-array. Whole Exome Sequencing later revealed a de novo heterozygous variant in EPN2 c.761C>A, p.(Ala254Asp), which is a variant in a gene of uncertain significance, a finding not present in either parent. There were negative findings for glycogen storage disorders and neuroblastoma. There was mild hypoalbuminemia (34 g/L), normal liver function tests, and elevated serum creatinine with maximum value 154 mmol/L (= 1.74 mg/dL) on 20th day of life which slowly improved over time.

Ultrasound (Figure 1) confirmed predominantly moderate to severe ascites with no pleural or pericardial effusions. There was bilateral mild hydronephrosis without bladder abnormalities, and no vascular or lymphatic malformations of the neck, or intra-abdominal mass which might explain potentially increased venous pressure. Therapeutic and diagnostic paracentesis was performed on day 3, and 40mls (10ml/kg) of straw-colored ascites was removed. Values were most consistent with cardiac/cardiovascular ascites (Table 1). Both body wall edema and ascites improved gradually over time with maintained urinary output. However, he stopped urinating promptly for 3 separate times after removal of the urinary catheter and remained anuric for up to 12 hours until the catheter was replaced, raising suspicion for bladder outlet obstruction.

A voiding cystourethrogram (VCUG) on day 8 showed severe vesico-ureteric reflux (VUR) grade V on the left, and grade IV on the right side with normal bladder, and without any uretero-pelvic junction (UPJ) obstruction. However, there also was mild dilation of the bulbar urethra with abrupt termination of the contrast column, although no filling defect or abnormal focal outpouching was demonstrated. There was no evidence for posterior urethral valves (PUV), but these findings raised the possibility of anterior urethral valves (AUV, Figure 2). He was started on urinary tract infection (UTI) prophylaxis with trimethoprim. Cystoscopic confirmation and ablation of the AUV on day 13 by a urologist was therapeutic. A Mercapto-Acetyl-Triglycine – 3 (MAG3) scan (Figure 3) on day 24 showed a poor function for the left and normal function for the right kidney. Despite trimethoprim, he developed a UTI with enterococcus species on day 27 which was treated with antibiotics. The urinary catheter was successfully removed on day 33; the inguinal hernia was surgically repaired on day 40; and he was discharged home shortly thereafter, urinating normally on continued trimethoprim prophylaxis. The hypospadias were planned to repair around one year of life. His creatinine normalized within one month of life and remained normal (32 mmol/L=0.36 mg/dL) at 9 months of age. Ultrasound at pediatric nephrology follow-up at the same time demonstrated an atrophic left kidney and unchanged moderate right hydronephrosis. 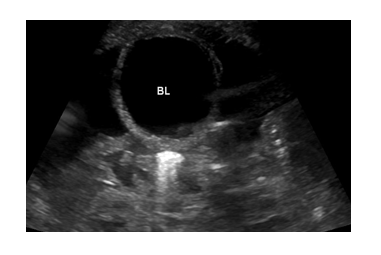 Grade V reflux on the left, grade IV on the right, dilatation of the bulbar urethra with abrupt termination of the contrast column (arrow). No outpouching or filling defect. 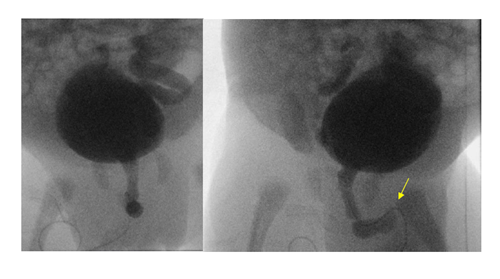 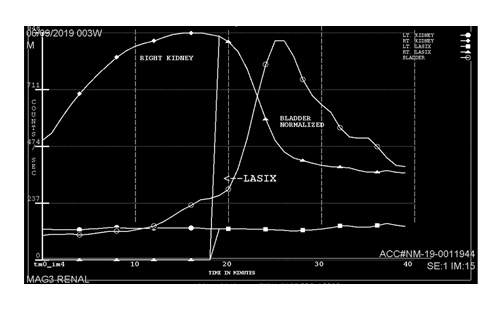 AUV has been described as a rare cause of lower urinary tract obstruction (LUTO) in infants and children in several case reports [1-3]. To the best of our knowledge, AUV presenting as hydrops fetalis has not been previously reported in the literature. Incidence for AUV is reported to be 10 times less compared to posterior urethral valves (PUV) which is reported in 1 in 5-8,000 [2]. Severity of obstruction dictates timing of presentation with about 30-70% of all cases diagnosed in the neonatal period, with the remaining presenting any time during childhood or adolescence, usually as dynamic urethral obstruction [2-4]. There are various embryological mechanisms proposed in the development of AUV including an abortive attempt at urethral duplication and failure of alignment between the proximal and distal urethra [3]. The obstruction in AUV may occur anywhere along the anterior urethra, about half in the bulbar part, up to a third in the penile, and the remainder in the peno-scrotal section [2, 3].

Presentation may vary widely depending on severity of urethral obstruction, ranging from poor urinary stream, dribbling of urine, incontinence or recurrent UTI, to complete lower obstruction with hydronephrosis and renal affection [2-4]. Common associated features are trabeculated bladder in 90%, hydronephrosis in 50-80%, and severe VUR in 23-40% of cases with AUV [2, 4]. AUV has been reported to lead to end stage renal disease requiring dialysis in up to 4% of cases [5]. Antenatal suspicion for fetal LUTO may be raised in 2.2 per 10,000 births [6]. Routine ultrasonography findings in pregnancy consistent with LUTO are genitourinary abnormalities, hydronephrosis, megacystis, altered renal morphology, size, and echogenicity, as well as secondary oligo- or anhydramnios [6]. The most common reason for fetal LUTO is PUV in 64% of cases. About a third to 45% of AUV had fetal hydronephrosis, and infectious presentations dominate in the neonatal age [2, 4]. Prognosis is better when AUV is diagnosed prenatally and intervened on early [2].

Fetal and neonatal ascites may develop in a variety of conditions and is usually accompanied by hydrops, i.e. fluid accumulation in 2 or more fetal serous cavities, such as skin, ascites, pleural and pericardial effusions [7]. Portal hypertension in liver disease is contrasted with non-cirrhotic ascites with a wide spectrum of infectious, cardiac, gastrointestinal, malignant and renal etiologies, among others [8]. Serum ascites albumin gradient (SAAG) has replaced the transudative/ exudative approach in adults, with a value ≤ 1.1g/L preferentially indicating non-cirrhotic causes [8, 9]. Table 1 gives an overview of common fetal and neonatal ascites biochemical analysis values which may aide in differential diagnosis [10]. Our patient’s values in the context of his other diagnostic findings were most consistent with overflow and capillary leak syndrome seen in chronic renal conditions [11]. Some urinary output must have been preserved in- utero in keeping with a more dynamic obstruction with AUV compared to PUV, as the mother had not been measuring small due to potential fetal anuria, there was no clinical evidence of pulmonary hypoplasia, and there was no bladder hypertrophy or rupture. The latter makes urinary ascites also unlikely. Unfortunately, we did not obtain creatinine values from the peritoneal fluid.

High index of suspicion is required in considering AUV as it often leads to less severe and more dynamic urethral obstruction [12]. A VCUG may be helpful to rule out PUV. The obstruction in AUV in contrast may appear as dilation of the anterior urethra proximal to the valve or diverticulum with abrupt distal narrowing (Figure 2) [2, 3, 13]. Urethro-cystoscopy may also be considered in the diagnosis, and cystoscopic transurethral ablation of the valve or diverticulum is the treatment of choice in cases of isolated AUV and associated with a good outcome [3, 14]. AUV associated with anterior urethral diverticula may require urethroplasty [3, 14]. Up to 80% of children with AUV will develop bladder dysfunction or instability, hyperreflexia, and diminished compliance and capacity may be seen on urodynamic studies [12, 14]. As with PUVs, long-term renal function is contingent on preoperative renal damage and preserved degree of glomerular filtration rate [15].

Anterior urethral valves (AUV) is an important but infrequent cause of lower urinary tract obstruction in infants. Just like posterior urethral valves, AUV may present as hydronephrosis; however, due to more dynamic and often less severe urethral obstruction, unusual presentations require a higher index of suspicion. We report here a neonatal presentation with hydrops fetalis, with predominantly skin edema and ascites, and anuria without urinary catheter. A voiding cystourethrogram may help conclude a diagnosis of AUV and cystoscopic ablation is therapeutic. We review the physiology, clinical presentations, treatment and outcomes of AUV in the context of a differential based on neonatal ascites values.

Department of Radiology, Alberta Children’s Hospital (for providing us with the radiographic images).

No Research Ethics Board was involved due to case report nature of manuscript. The subject’s parents and legal guardians have given their written informed consent to publish their case (including publication of images).

None of the authors have a conflict of interest to disclose.