Cerebro-costo-mandibular syndrome (CCMS) is also known as rib-gap defect with micrognathia syndrome. It is a condition comprising a constellation of mandibular hypoplasia presenting as micrognathia, abnormalities of roof of mouth (palate) and posterior rib defects as its basic features. Other signs and symptoms may include microcephaly, spina bifida. These anatomical problems predispose these patients to respiratory difficulties associated with upper airway obstruction, reduced thoracic capacity and scoliosis. We describe a sporadic case of a full-term female neonate born to a COVID-19 infected mother in third trimester with features of micrognathia, high arched palate with palatal hypoplasia, cervical spina bifida along with preauricular skin tag and congenital heart disease, presenting as respiratory distress at birth Cerebro-costo-mandibular Syndrome (CCMS) and with a good short term outcome.

A late preterm 2.18 kg, (expected 2.6kg)  female neonate, with length of 45cm (expected 47.5cm), and Head circumference of 32cm (expected 33cm) born to a 27 years old female through non-consanguineous marriage, delivered by Caesarean section, at dedicated covid hospital. She was 3rd gravida, with 2 live issues (both female children, live and well). Antenatal history was uneventful, with mild asymmetric growth retardation and oligohydramnios noted in 3rd trimester. Family history was unremarkable. Mother was symptomatic with cough and fever 3 days prior to delivery. She subsequently tested positive for SARS-Cov2 by RT-PCR. Baby required initial steps of resuscitation with suctioning and stimulation as she had difficulty initiating respiratory efforts at birth.

Later she was transferred to our neonatal intensive care unit, due to noisy breathing with respiratory distress. Baby required respiratory support in the form of nasal prong oxygen in prone positioning. On detailed physical examination baby had several dysmorphic features. They were micrognathia, high arched palate, short tongue, natal teeth, bilateral pre-auricular skin tags, micro-ophthalmia, short and slanting forehead, flat nasal bridge, low set ears, wide oral fissure, long philtrum, low posterior hairline, short neck There was redundant skin at the back with scoliosis of cervico-dorsal spine [Figure 1, 2, 3] Chest x-ray did not reveal any lung parenchymal abnormality, but showed split gap of posterior ribs bilaterally. All above findings along with micrognathia pointed to cerebro-costo-mandibular syndrome. Oropharyngeal swab for SARS-Cov2 was done at 15 hours of life, which was positive.

All inflammatory markers including D-dimer, C-reactive protein were negative in this baby. Baby’s oxygen requirement reduced by day 3. Baby was maintaining saturations on room air by day 4, and noisy breathing persisted with reduced intensity. Noisy breathing in this neonate was due to pooling of secretions in the oropharynx. On direct laryngoscopy, baby had anteriorly place larynx, with mobile vocal cords. Initially baby was started with Orogastric tube feeding for a period of 7 days. Later in the course, bondla feeding was tried, but baby had difficulty accepting feeding.

Hence direct breastfeeding was encouraged, as mother was willing for same. Baby was comfortable while breastfeeding, with proper hold on areola while feeding. Mother was taught to remove oral secretions of the baby with help of bulb suction. Noisy breathing was reduced in intensity. This baby was roomed-in with mother for a period of 4 days. 2-D ECHO revealed, a moderate size (2.5mm) Ostium secundum Atrial Septal Defect. Ultrasound imaging of abdomen, Kidney ureter bladder was done, which did not reveal any abnormality. Ophthalmic evaluation revealed, left eye convergent squint, fundus was unremarkable. Karyotyping was done which revealed 47XX pattern. Hearing assessment with Oto-acoustic emission showed bilateral defects of hearing.  Baby was discharged after 15 days of NICU stay with mother. 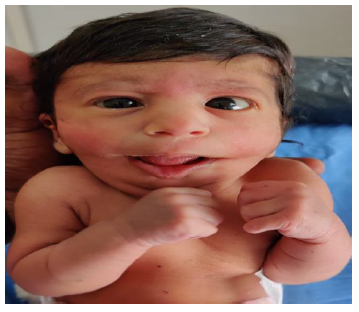 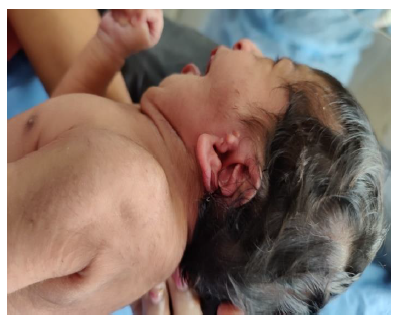 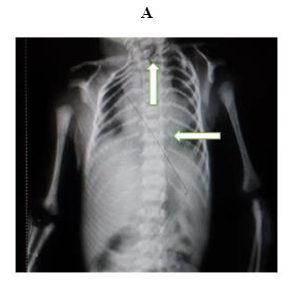 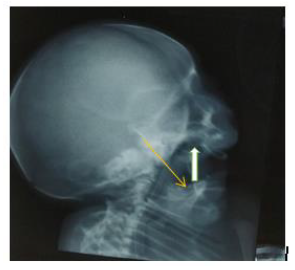 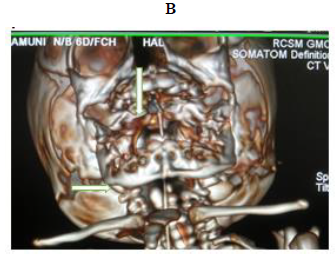 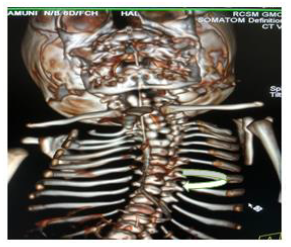 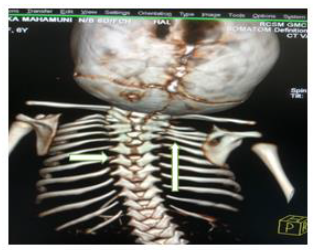 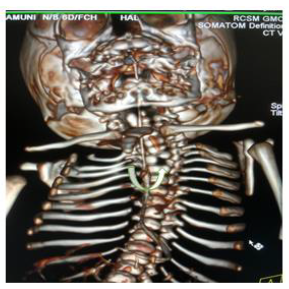 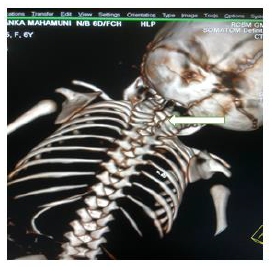 Figure 3: A) X-RAY; B) For further detailed study of skeletal anomalies, 3-Dimensional Volume Rendering Technique (3D VRT) CT of Skull and spine was done. It revealed above anomalies.

Cerebro-costo-mandibular syndrome (CCMS) is a rare disorder with only 80 cases described in literature till date, affecting both males and females equally [1]. It was initially described by Smith in 1966 as a developmental defect that included micrognathia and rib Gap defects, hence also known as “rib -gap syndrome”, “and Smeith-Theiler-Schachenmann syndrome”. McNicholl et al reported three siblings with rib deformities with micrognathia, glossoptosis and mental retardation and labelled it as Cerebro-costo-mandibular syndrome (CCMS) by [2, 3]. Majority cases of Cerebro-costo-mandibular syndrome (CCMS) occur sporadically in cases with no familial background accounting for 67% of cases, rest are familial with both autosomal dominant and autosomal recessive inheritance [4]. Although, no causative gene has been identified till date, defects in the sonic hedgehog (SHH) signalling cascade may be responsible for these developmental anomalies [5]. CCMS is caused by changes in the SNRPB gene [6]. Single gene inheritance was ruled out as their was no consanguity and the absence of parental anomalies. Antenatal ultrasound features of CCMS can include raised translucency, intrauterine growth retardation, polyhydramnios, micrognathia, which may indicate cleft palate/Pierre Robin sequence [7]. In our case, antenatal ultrasound showed only intrauterine growth restriction and oligohydramnios. Although cerebral involvement was thought to be a part of the syndrome, several authors suggest that mental retardation, which is seen in 50% patients can be due to hypoxia in the neonatal period. Our baby had difficulty initiating respiration at birth, this may contribute to the mental retardation in future [8].

Our patient had stridor while inspiration, which is explained by the Tracheomalacia. About 5-29% patients have short hard palate [10]. Some of the rare defects noted in our patients include high arched palate, Low-set ears, Long philtrum, Scoliosis and congenital heart disease as Atrial septal defect. Wael et al reported two cases of CCMS which showed features of conductive hearing loss and Spina bifida [11]. F B Plotz et al in 1996 described two boys with CCMS who presented with Pierre Robin anomaly and respiratory insufficiency, who also had muscular hypotonia, severe micrognathia, glossoptosis, short palate and preauricular tag, and narrow thorax [12]. These basic clinical and Xray findings are sufficient for the diagnosis. But we worked up for the differential diagnosis. In Trisomy 18 micrognathia and hypoplastic ribs are often present [13]. Hence Karyotype was done, which ruled out the diagnosis of Trisomy 18. Pierre Robin sequence (PRS) is classically described as a triad of micrognathia, glossoptosis, and cleft palate. Infants frequently present at birth with a hypoplastic mandible and difficulty breathing. PRS is not a syndrome in itself, but rather a sequence of disorders, with one abnormality resulting in the next [14]. More than 50% of infants born with PRS have associated syndrome or anomalies including skeletal dysplasia, but not any posterior rib gap defects [15].

In general, the prognosis of CCMS is very poor [16]. The main cause of death was respiratory disturbance during the early neonatal period and infancy.  CCMS can be classified into three categories according to severity. First, a lethal group that comprises patients who show severe cyanosis, dyspnoea and other symptoms and die even when they are provided intensive medical support. They normally survive for less than 1 month. The second group is the severe group, in which most of the patients can survive for more than 1month if they are supported by artificial ventilation, medication, and other medical procedures. However, most of them cannot survive past infancy because of low pulmonary function and/or resulting severe respiratory infection. The third group is the moderate or mild group in which most of the patients can live long lives when they are provided conventional medical support; these patients show mild or no symptoms, such as dyspnoea or cyanosis at birth [17]. Our patient will be classified in moderate or mild group as it showed mild symptoms as respiratory distress reduced requirement of oxygen support within a span of 4 days. Baby could maintain Saturations in room air without oxygen support by day 4.

Although baby had positive RT-PCR for SARS-Cov2, but baby did not show any signs of inflammation, being categorised as asymptomatic. Lingkong Zeng et al studied Neonatal Early-Onset Infection With SARS-CoV-2 in 33 Neonates Born to Mothers With COVID-19 in Wuhan, China. They concluded that, the clinical symptoms from 33 neonates with or at risk of COVID-19 were mild and outcomes were favourable [18]. As mother had infection 2 days before delivery, so the possibility of teratogenicity due to SARS-Cov2, was ruled out. Management requires multidisciplinary approach, that begins from birth. As already known that, cerebral involvement is usually related to hypoxia, early recognition and intervention is extremely important in improving the prognosis. Development is quite satisfactory once the initial respiratory problems are overcome [16]. Plötz et al has reported mortality of as high as 56% in CCMS, mainly attributed to early respiratory problems, owing to rib defects, micrognathia, tracheomalacia and feeding difficulties [12]. Operative intervention for mandibular hypoplasia and Spina bifida may be required [8].

CCMS should be considered in every infant with micrognathia and rib-gap defects on chest X-ray. Association of this syndrome with maternal COVID-19 may be an incidental finding. Early diagnosis of this rare syndrome can lead to early intervention. These infants need careful monitoring of respiratory functions and surveillance of respiratory functions. They have feeding difficulties and conductive deafness, requiring follow-up with maxillofacial and audiological specialist. Their physical and psychomotor development requires frequent assessment. Extensive monitoring of the respiratory functions, preventing feeding difficulties and recurrent infections is required. Accurate diagnosis of the condition is important for parental counselling regarding health problems associated with this syndrome, and the life span of the child. Genetic counselling is necessary for subsequent  pregnancies.

The authors express gratitude to the parents of the patient for allowing this report and providing additional information on the current state. We also thank all clinical staff who participated in the care of the baby.