Phlegmasia cerulea dolens (PCD) is a life-threatening manifestation of acute deep vein thrombosis, leading to pain, ischemia and compartment syndrome. Individuals with malignancy are at high risk of developing PCD. Treatment of PCD typically involves routinely anticoagulation. We present the case of a patient who developed PCD of his left lower extremity on the day of liver biopsy which posed high risk for bleeding as well. Mechanical thrombectomy using a popliteal approach was used to treat PCD successfully. In high risk individuals pre invasive procedure prophylaxis may be of benefit to prevent development of PCD.

PhlegmasiaCeruleaDolens (PCD) is total or near total occlusion of the venous system causing edema, pain and potential gangrene or compartment syndrome typically involving appendicular system. Little is known about the unique challenges and management approaches when bleeding risks are high in a patient who requires treatment for PCD.

A 61 years old male with history of lung adeno-carcinoma and tobacco use, admitted with intractable back pain. Work up revealed extensive hypo dense nodules in liver, adrenal, lung and spinal cord. He underwent liver biopsy and after liver biopsy he was noted to have swelling, tenderness and cyanosis in left lower extremity. Pedal pulses were not felt although it was barely audible with Doppler ultrasound. His vital signs includedBP124/86 mm hg, HR 124/min RR 15, Sao2 96%. His immediate lab values included hemoglobin of 11.5 gm% and hematocrit of 37.1. Platelet count was 297. INR 1.2. Basic chemistry was essentially normal with a creatinine of 0.80. A venous Doppler revealed occlusive thrombus involving left common femoral, superficial femoral, popliteal, posterior tibial and greater saphenous veins. Arterial Doppler signal-swere suggestive of diffuse mild to moderate non-obstructive proximal peripheral vascular disease with atherosclerosis. He was started on heparin drip with very close monitoring for any bleeding complication, including monitoring of abdominal area for hema-toma given his immediate post liver biopsy period. He was taken for mechanical thrombectomy next day using left popliteal approach. He developed hema-toma proximal to the catheter access site and required blood transfusion during immediate post procedure period. No intra or retroperitoneal bleed was observed. He did not develop compartment syndro-me.He became hemodynamically stable. 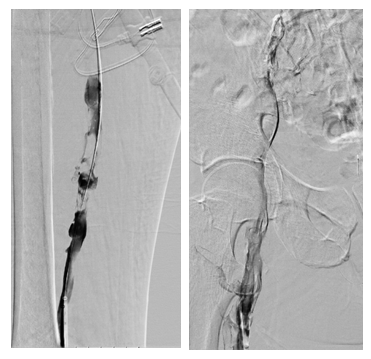 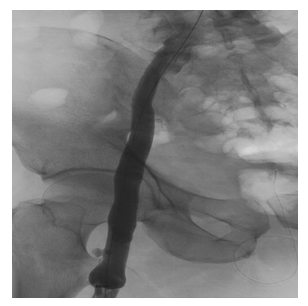 PCD is an aggressive and life-threatening form of venous thrombosis complicated by ischemic necrosis. Massive thrombosis extends to collateral veins result-ing in venous congestion with fluid sequestration in the interstitium causing collapse of arterioles, which progresses to ischemia and, if severe, circulatory collapse and shock. The mortality rate for PCD is as high as 40%, especially when gangrene develops [1]. In order to decrease this risk, patients can receive primary or secondary DVT prophylaxis. Primary pro-phylaxis consists of use of medications and mechan-ical approaches for prevention whereas secondary prophylaxis focuses on early detection with screening methods and treatment of subclinical DVTs [2]. PCD requires swift treatment to prevent loss of life or limb. There are several different treatment modalities to choose from, that include surgical thrombectomy, percutaneous manual aspiration thrombectomy (mechanical), systemic thrombolytics, catheter direc-ted thrombolytic, pharmaco-mechanical catheter directed thrombolysis. Of these options, systemic thrombolytic, catheter directed thrombolytics and pharmaco-mechanical catheter directed thrombolysis introduce thrombolytics. Each individually introduces a different level of bleeding risk to the patient. Manual aspiration thrombectomy, which our patient underwent, has been used in patients with coagulo-pathies such as heparin-induced thrombocy-topenia due to the fact that it does not use thrombolytic agents [3]. Oguzkurt and colleagues conducted a small scale study in 2011 which concluded that manual aspiration thrombectomy with adjunctive use of catheter-directed thrombolysis and stent placement is an effective endovascular treat-ment method with high clinical success and survival rates for PCD. The success rate was about 86% [4].

Our patient was placed on primary prophylaxis, using Enoxaparin. Cancer causes a hypercoagulable state and chemotherapy causes endothelial injury [5]. Unfortunately, the patient still developed PCD. In our case, our patient had stage 4 lung adenocarcinoma, which is considered as one of the higher risk cancers that could cause VTE. The AVERT and CASSINI trials showed there was higher risk of bleeding in the groups that received LMWH but had a reduced overall mortality rate. The ENOXACAN trial showed that the patients who received prophylactic enoxaparin, a LMWH, prior to their surgical procedures for 31 days prior showed less VTE at 1 and 3 months with no major difference in the bleeding rates [5]. Our patient did receive enoxaparin after he had been admitted to the hospital and prior to his liver biopsy. Despite VTEprophylaxis prior to liver biopsy, the patient still developed an acute extensive DVT. However, despite the fact that there were no thrombolytic used during the manual aspiration thrombectomy and the patient’s enoxaparin was held before the procedure, the patient developed severe anemia that required transfusion of one unit of packed red blood cells. The patient later developed hematoma at the site, which resolved after few days. While pre-procedure prophylaxis is not common practice, it should be a consideration, especially in patients with cancers who are at higher risk for developing VTE. The risks of bleeding should be equally considered with the benefits of prophylaxis. To best of our knowledge this case presents unique challenge in treating PCD with anticoagulation in the setting of immediate post liver biopsy period and development of bleeding complications including hematoma and anemia requiring blood transfusion. Mechanical thrombectomy with popliteal approach was used in our patient which may have helped reduce bleeding risks. More studies are required to assess need for pre procedure prophylaxis in high risk groups for prevention of PCD.