Clinical Accuracy of Renal Colic Diagnosis before Imaging; Are we Biased?

Introduction: Renal Colic is a common presentation to the Emergency Department (ED), accounting for 1.05 % of ED presentations. The aim of the study is to determine the accuracy of triage system in patients presenting with suspected renal colic and the effect of labelling bias in this cohort.

Results: In 603 (1.40%) patients, the diagnosis of renal colic was confirmed. We calculated the triage accuracy of ED triage system for renal colic to be 78.8%. 371 (61.5%) were not identified as suspected renal colic at triage. Renal colic was confirmed in 234 (38.5%) patients upon discharge from ED. The other 41 (14.9) had been diagnosed with other alterative diagnosis. Comparing patients who were diagnosed with renal colic and other alternative diagnosis, the median ages of the 2 sub-groups were similar, however, the group with not renal colic diagnosis on discharge, had a larger proportion of females. A Chi Square test was performed which showed a statistically significant difference among the 2 groups in terms of gender (P=0.000124331).

Conclusions: Triage system for suspected renal colic seems to have a good accuracy. However, ED physicians should consider labelling bias and other differential diagnoses when assessing female patients with flank pain or tenderness, as there is a higher chance of misdiagnosis.

Renal Colic is a common presentation to the Emergency Department (ED), making up 1.05 % of ED presentations [1]. The lifetime prevalence of renal colic in the general population is about 15% for males and 8% for females [2].  It typically presents as acute flank pain , classically radiates to the groin with associated nausea. In addition to pain, other potential complications of ureteric stone include superimposed infection and obstructive uropathy with acute kidney injury (AKI) [3]. Patients are triaged on arrival to the Australian Emergency Departments usually by a triage nurse and allocated a triage category based on the Australian triage system (ATS) after obtaining a brief history and examination, before being seen by the doctors in order of urgency.  Given the limited time available, the triage process is brief so critical assessment and management could be initiated accordingly. Many sources of diagnostic bias can occur when ED physicians are seeing patients with triaged diagnoses. Labelling bias or framing bias can occur when reading patients’ triage notes [4]. “Triage Cueing Error” and “Search satisfying behaviour” can occur during the initial assessment [5] Triage cueing error occurs when the physician’s subsequent behaviours and ideas are impacted by the triage diagnosis. This encompasses diagnostic momentum, anchoring bias and availability bias. This can cause physicians to incorrectly assume that patients with a lower triage acuity are not as sick and as a result miss a serious condition [6] including symptoms and complications including Abdominal aortic aneurism (AAA), referred pain secondary to testicular and ovarian torsion. Search satisfying behaviour occurs when a physician stops looking for further information once a positive finding is found [6]. This increases the likelihood of misdiagnosis and clinical error.  To avoid bias, it has been suggested for ED triage to describe patient symptoms without any labelling. rather than give specific diagnoses. Additionally, little is known about the extent of impact of bias on physician diagnosis in the ED. Renal colic typically presents with severe flank pain which may radiate to the groin. For patients under 50 with mild symptoms with minimal risk factors, investigations may not be necessary [7]. Diagnosis of renal colic is based on clinician gestalt and the clinical picture of the patient. The aim of the study is to determine the accuracy for this diagnosis on arrival after triage and determine the effect of labelling bias as well as the clinical outcomes of these cohort.

This is a retrospective cross-sectional study of adults (above 18 years old) presenting to any of the three Monash Health EDs with provisional diagnosis of renal colic between March and June 2019. Monash Health, located in south-east Melbourne, is the largest health network in Victoria, Australia, with approximately 230,000 annual presentations across three hospitals: Monash Medical Centre (tertiary hospital), Dandenong Hospital and Casey Hospital (district hospitals) This study was approved by the Monash Health and Monash University Human Research and Ethics Committees

Adults more than 18 years old on presentation during the study period were identified through the ED medical records (Symphony, EMIS Health, Leads, UK) by electronically filtering between March and June 2019. Cases who did not wait (DNW) after triage to be seen by a doctor were excluded.  Patient demographics including the patient’s gender and age, date and time of presentation, presenting complaint, triage provisional diagnosis, investigations, management, final diagnosis and outcome were obtained and analysed.

Health EDs during the study period, of which 273 were triaged as suspected renal colic (0.65%). 11 were excluded (did not wait to be seen; DNW).  In 232 (81.7%) the diagnosis of renal colic was confirmed upon discharge from ED. Patients who were triaged as suspected renal colic in the ED were divided into two subgroups based on final and discharge diagnosis. To identify any potential cases of labelling bias, the ED notes and charts of the 41 patients with alternative diagnosis were reviewed. Statistical Analysis was carried out using Microsoft Excel to explore the significance of the difference in characteristics between the 2 subgroups.  A Chi square test was performed to calculate the significance of the difference in proportion of females. To identify any poor outcomes or re-presentations, a 4 week follow up period was used post discharge and data was obtained from the electronic medical record (EMR). 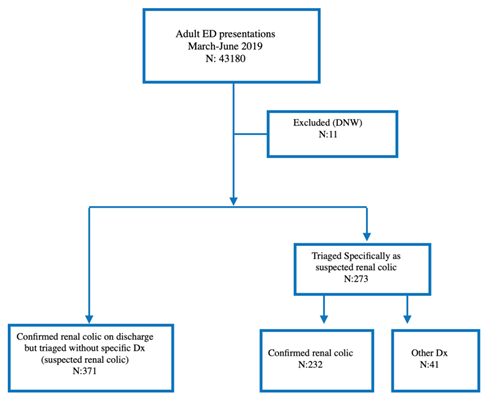 3.2 Subgroup analysis: Triaged but not diagnosed as renal colic

The number of renal colic presentations in this study (1.40%) is similar to the reported data in Australia (1.05%) [1]. Multiple previous studies including the ACEM choose wisely group, have been recommending avoiding unnecessary imaging in patients with high pre-test probability of renal colic without any red flags, with Point of Care Ultrasound preferred [7]. Blecher et al. found that restricting CT Urography to those with poor analgesic response or ‘red flag’ symptoms help reduce the usage of CTU in the ED. They also recommended POCUS as initial imaging [8]. A meta-analysis by Wong et al. found that ultrasound has moderate diagnostic accuracy in diagnosis of renal stones [9]. However, point of care Ultrasound is currently not utilised well in the emergency department despite many recommendations [10]. The key management of Renal Colic in the emergency department involves pain control ranging from simple analgesics like paracetamol and NSAIDS to more potent ones including oral or intravenous opioids, of which the most prescribed in the ED is oxycodone [11]. IV opioids are usually the first medication of choice in acute management followed by other analgesics depending to the response. We calculated the triage accuracy of ED triage system for renal colic to be 78.8% if specified on triageThis shows that ED triage diagnoses are generally reliable. However only 38.5% of patients with renal colic were specifically identified on triage. 61.5% of patients with renal colic were triaged based on symptoms without any specific categorization.

It is usually an acceptable practice for triage nurses to briefly assess patient and allocate either a diagnosis or chief complaint followed by triage category according to ATS so that the assessment and management of the patient can be initiated accordingly. Fortunately, neither of the groups with confirmed renal colic or other alternative diagnoses following ED discharge had any no adverse outcomes. Comparing those who were diagnosed as renal colic and those not, the median ages of the 2 groups were largely similar. However, the 2 cohorts had differing proportions in gender. The P value of the difference is less than 0.05, hence the difference is statistically significant. This could potentially indicate that other diagnoses should be considered in female patients with flank pain before assuming renal colic.

Given that our hospital network covers a large geographical area of south-eastern Melbourne, attrition bias is not likely, since repeat presentations are likely to represent to the same health network. Additionally, hospitals in the region notify each other of unexpected deaths following recent discharges. The decision was made within the limits of our funding and ethics approval to not attempt to contact patients who had no further presentations to hospital. It is unlikely, but not impossible, that there were patients missed by this approach. Given the retrospective nature of the study, the results are hypothesis generating and require prospective evaluation to assess any clinical applicability of the abnormal findings for the study population.