Introduction: Congenital heart disease (CHD) is the leading cause of congenital malformations. CHD is a real public health problem in our developing countries due to delays in diagnosis and medical and surgical treatment. The general objective of our work was to study the epidemiological, clinical, paraclinical and therapeutic profile of CHD in a university hospital in Dakar.

Conclusion: CHD are a reality in Africa, their frequencies in all reported series are certainly underestimated due to the very limited means of diagnosis.

Congenital heart disease (CHD) is a heart defect, abnormality of cardiac structure or function that is present from birth and can be discovered late [1]. They are the primary cause of congenital malformations; they may be isolated or form part of a poly malformative syndrome [2]. The etiologies are multiple and may be of maternal origin or result from an anomaly specific to the embryo. The estimated prevalence of 8 cases per 1000 live births in France is unknown in our regions due to the limited human, financial and technical resources available for reliable neonatal screening. The overall incidence is 2 to 11 cardiac malformations per 1000 live births [3]. There are now more than 200 different CHD, from the simplest to the most complex [4]. In these newborns, a delay in diagnosis increases the rate of morbidity and can even be fatal [5]. Today, antenatal diagnosis is possible thanks to the progress of fœtal cardiology through fetal ultrasound. According to data in the literature, the rate of antenatal diagnosis does not exceed 25% [6]. It should be noted that several studies have shown that the systematic use of a pulse oximeter on the first day of life is effective in the early detection of a cyanogenic heart defect [7, 8]. In Senegal, since the first study on CHD in 1971 by Sankalé, many other studies have focused on this subject. Multidisciplinary care is a real problem in developing countries and this makes the prognosis of CHD more difficult, as it is usually reserved for the long term. However, great progress has been made thanks to this. In spite of the notable progress in this field, CHD is a real public health problem in developing countries. This is linked to a delay in diagnosis due to several factors and to a problem of medical and surgical management. The general objective of our work was to study the epidemiological, clinical profile of CHD.

Our work took place at the Diamniadio Children’s Hospital (DCH) for a period of 3 years from 1 January 2015 to 31 December 2017. It is a retrospective study focusing on the epidemiological, clinical, paraclinical and therapeutic aspects of CHD. We have collected all the records of congenital heart diseases hospitalized during the study period. Included in the study were all children aged 0 to 15 years of age, who had a diagnosis of congenital heart disease confirmed by cardiac ultrasound and who required a stay in a paediatric emergency department, neonatology department or hospitalization during the study period. Data were entered and analyzed using sphinx and Microsoft office Excel 2010 software under Windows 7. Statistical analysis used the Chi 2 test.

Table 1: Distribution of weight/height indices according to z-score. 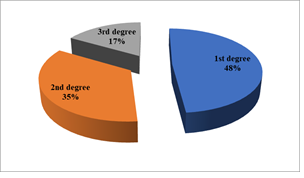 Figure 1: Representation of patients according to consanguinity. 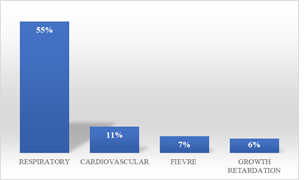 Figure 2: Graphic representation of the reasons for consultation. 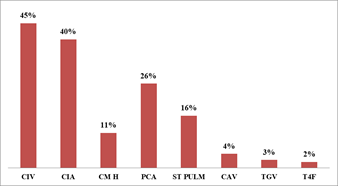 In our study, the hospital incidence of CHD was 0.0024%, i.e. a prevalence of 2.4 per 1000 children hospitalized at the DHC. In Madagascar, one study found a prevalence of 4.63 per 1000 births and another study in Senegal found a prevalence of 1.8 per 1000 hospitalized children in 2005 [9, 10]. The average age of patients was 9 months in our series. Most CHD are diagnosed at an early age in 70% of cases between 0 and 2 years [11]. The sex ratio was 0.89 compared to other studies which showed different results [12, 6]. First degree parental consanguinity was found in 48%. BAH [6] identified parental inbreeding in 54.2% of patients and first degree in most cases. Isolated atrial septal defect (ASD) and ventricular septal defect (VSD) are the most common CHD as reported in the literature [6, 13-15, 16]. In our study, only 11 patients had undergone a complete cure for heart disease, i.e. 6.9%. Of these, 2 had tetralogy of Fallot (T4) type heart disease and the last had persistent ductus arteriosus (PDA). The same results were found in the work of Bah [6] where the indication for surgery was given in most cases and a surgical cure was made in only 45 patients with simple postoperative after-effects. The number of patients having undergone surgery remains very low compared to Western countries where more than 80% are operated on [17, 18]. The evolution during hospitalization was favorable among the 128 patients (80.5%). In our study, we reported 3 cases of death, 1.8% due to cardiorespiratory arrest by cardiac decompensation and 23 deaths secondary to a nosocomial infection, 14.4%. The death rate was 3.1% in the Bah series [6].

Our retrospective work allowed us to confirm that congenital heart disease was a reality in our regions. In spite of the weakness of our means, our study showed considerable efforts towards the early diagnosis of congenital heart disease. However, there is an important gap if we compare our results with those of developed countries. These studies make it possible to provide genetic counselling for high-risk situations, to make diagnostic means accessible, to improve technical platforms and to strengthen the human and technical capacities of cardio-paediatric clinics.