Peripheral neuropathy is rare in children, however inflammatory bowel disease (IBD) can lead to neurological manifestation in pediatric patients. IBD is a term for Crohn’s disease (CD) and ulcerative colitis (UC), believed to be resulting from chronic inflammation and unresponsive activation of the mucosal immune system of the gastrointestinal tract. Although extra intestinal manifestation including several systemic dysfunctions has been documented in IBD, the neurological association and its pathogenesis are rare during the early course of IBD. However, the occurrence of neurological manifestation in IBD may cause secondary disability which can persist throughout life, may become life-threatening if left untreated. We reported a child diagnosed case of pediatric inflammatory bowel disease was admitted with a complaint of neurological manifestation. We investigated the possible causes of neuropathy in IBD, after excluding other possible causes related to neuropathy, this case is diagnosed as acute sensorimotor peripheral neuropathy due to nutritional deficiency or immunomodulatory drug associated with Crohn's disease. Immunosuppression is an integral part of the treatment of pediatric IBD but the inconsiderable selection of immunomodulatory drugs may result in irreversible risk including neurological impairment.

A 14-year-old male patient was admitted to the pediatric ward with the chief complaint of semi-consistent stool slightly mixed with blood and mild abdominal pain for approximately two weeks. He had a history of weight loss and fatigue over 6 months. He was a diagnosed case of inflammatory bowel disease (IBD); the histopathological examination and colonoscopy results established the diagnosis at the age of 13. His parent was reported that he was having experience IBD symptoms prior to his diagnosis of about 9 months. After diagnosis, he was in the treatment of corticosteroids and non-steroidal anti-inflammatory drug, the evaluation was initially favorable but with 2 relapses in 1st year. Then he was given prednisolone for inducing remission with immunomodulators 6-MP for maintenance therapy to prevent the disease exacerbation. At this moment of his third relapse, he presented mild fever, abdominal cramps, diarrheic stool with blood, and massive weight loss of approximately 4 kg in the last 2 months. Besides this syndrome, surprisingly he noticed the mild pain and weakness of his lower extremity during movement and walking over the last 2 months. He was psychologically upset and emotionally disturbed due to he gradually lost his balance. He had a history of neonatal diarrhea, which is caused by gastrointestinal infection, but the causative agent was unknown. Drug history revealed the antibiotic exposure of metronidazole prior to his confirmed diagnosis of IBD.

On Physical examination, the patient had minor gait impairment and distal symmetric weakness. The neurological examination confirmed mild peripheral neuropathy, slightly decreasing ankle jerk, with reducing distal vibration and pinprick sensation. Lab examination had revealed the slight leukocytosis with increase erythrocyte sedimentation rate (30mm/hour) and elevated C- reactive protein (20mg/dl). We also investigated the liver function and renal profile including transaminases, urea, and creatinine, which were all within normal physiological limits. A complete blood count shows anemia with Hb 12.5g/dl; the patient’s serum levels of lipid profile and thyroid-stimulating hormone (TSH), T3, T4 were within normal limits. We did not get any positive culture result for bacteria and parasites in stool examination except the only presence of dead leukocytes. His blood glucose log was within normal limit, fasting was less than 110mg/dl and postprandial glucose level was < 130mg/dl, His HbA1c was 5.6%. There were no pathological findings in upper GIT which was excluded by endoscopy. Colonoscopy revealed the pathological appearance of colonic mucosa with follicular edema. The histopathological picture (Figure) of the lower intestinal mucosa (inflammatory infiltration with mucosal disruption) confirmed the diagnosis of ileocolic Crohn’s disease. Hematological profile excludes the provisional diagnosis for peripheral neuropathy like rheumatic diseases, thyroid disorder, and glucose intolerance. Laboratory studies reported a decreased level of B12 (200 ng/dl), vitamin D (20 ng/ml), and iron in serum. 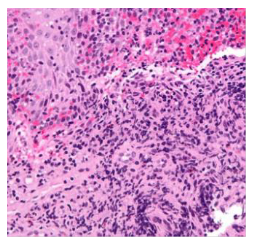 Recent epidemiological studies have reported global incidence rate of IBD is increased significantly from 1991 to 2017, the prevalence rate is raised from 79.5 to 84.3 per 100 000 population with neurological manifestations varying from 0.25 to 35.6% [1, 2]. In addition, the annual incidence rate of pediatric Crohn's disease is increased or surpassed the UC over the past 40 years, 25- 30% of patients with Crohn's disease are younger than 20 years old [3]. Although the onset or diagnosis of Crohn's disease has typically occurred at approximately 15 years of age, the gender-related onset is different in adults and children; Crohn's disease is a higher risk among boys but risk increase among women in the adult group [4].

The etiology of pediatric IBD is believed to results from a complex variety of factors like inappropriate immune response, genetics, or environmental risks. The genetic abnormality is more common in the onset of pediatric IBD than environmental exposure (more susceptible to adult) such as cigarette smoking, stress, nonsteroidal anti-inflammatory drugs which are required long-term exposure to influence or modify the mucosal immune system. In terms of genetic association, NOD2/CARD15 gene mutation on chromosome 16 has been responsible to develop chron’s disease in children [3]. This type of genetic mutation causes increase activation of proinflammatory cytokines like nuclear factor-kappa B (NF-κB), TNFα which are resulting in imbalance regulation of the intestinal mucosal immune system and disruption of mucosal protection; host immune response can also be abnormally triggered by drug resistance microbes, infectious agents such as virus, bacteria, parasite [5-7]. Patients with IBD have been shown high titer of virus, bacteria, 68% of patients with Crohn's disease showed the perinuclear antineutrophil cytoplasmic antibodies (pANCA) and anti-Saccharomyces cerevisiae antibodies (ASCA) [8, 9]. Immunoglobin IgA and IgG related antibody can be used as a diagnostic accuracy of IBD.

In respective of this case, the patient had a history of exposure to infectious agents which can be the responsible factor to trigger the abnormal immune response of the mucosal defensive system. Activated immune cells increase the production of inflammatory cytokines which can be implicated in pathogenesis and activation of the chronic inflammatory condition including increase susceptibility of IBD [8]. The patient had also a history of growth retardation and weight loss which are the spatial consideration in pediatrics IBD due to increased metabolic demand for growth and sexual maturation during the developmental period but IBD leads to malabsorption of growth essential vitamins with inadequate nutritional supplementation (Table) [10]. In general, pediatric patients with IBD often exhibit essential vitamins and nutritional deficiencies due to malabsorption. Vitamin B12 deficiency is the most common feature of neuropathy in Crohn's disease because vitamin B12 is required for the maturation of DNA genetic material, myelination, and axon formation of the nervous system [11]. In the case of pediatric patients, it is a rare onset of peripheral neuropathy because most of the case's onset of peripheral neuropathy is 50-60 years of age. We cannot specify the phenotype of peripheral neuropathy because the patient refused to do the nerve conduction velocity test, electromyography, and nerve biopsy.

Table: Neurological manifestations and pathophysiology of neurological disorder in IBD with treatment outcome [2, 12-15].

We initiated treatment with antibiotics for 7 days and probiotics for one month along with long-term anti-inflammatory (steroid) therapy. Discharged with recommended high-dose oral vitamin D and vitamin B12 tablets (1000 to 2000 µg) taken daily or intramuscular monthly injections to correct blood and

neurologic abnormalities along with antidepressants.

The authors do not have any conflicts of interest.

This research did not receive any specific grant from the public, commercial or non-profit organization.