Polycythemia vera is a disease process resulting in excess production of blood cells and platelets in the bone marrow which actuates ischemic events in both the large and small vessels in the body. This underlying risk of thromboembolism is further compounded by other ischemic burdens, such as diabetic ketoacidosis. We present an unusual case of a female with polycythemia vera who was diagnosed with ischemic gangrene in her extremities as a result of diabetic ketoacidosis, despite having only mildly elevated blood counts from her underlying disease. We will review the various treatment options currently available for polycythemia vera.

Polycythemia vera (PV) is a disorder that results in proliferation of RBCs, WBCs, platelets, and their progenitors without an identified stimulus [1]. The most common mutation in these patients is the V617F mutation in the Janus kinase 2 (JAK2) gene that generates growth of cell lines [2]. PV is rather rare, with an incidence of 0.6-1.6 persons per million population with a mean age of onset between 50-70 years [3]. Patients most commonly complain of early satiety due to splenomegaly, fatigue, pruritus, night sweats, bone pain, fever, weight loss, and hyperuricemia/gout [4]. Common causes of mortality in these patients include acute leukemia, secondary malignancies, thrombotic complications, and heart failure [5]. To date, there is scant literature on how uncontrolled hyperglycemia, specifically diabetic ketoacidosis (DKA) may affect outcomes in PV patients. This case report demonstrates the impact of uncontrolled hyperglycemia and DKA resulting in digital ischemia and acceleration of the disease process, in addition to current treatment modalities of PV.

An 87-year-old female with a past medical history of PV and diabetes mellitus type II (T2DM) presented to the emergency department with a one-month history of gradually worsening pain and discoloration of the fingertips on the right hand. She denied any history of smoking, alcohol, and illicit drug use. Her home medications included hydroxyurea, metformin, and simvastatin. Initial physical exam showed areas of ischemia involving digits two to five of the right hand with dry gangrene of the distal one-third of the third digit. Her radial and brachial pulses were diminished bilaterally, and the rest of her exam was unremarkable. Her laboratory results displayed RBC count of 12.4 x 103/uL, WBC of 39.5 x 103/uL, and platelet count of 626 x 103/uL. Her blood glucose was 607 mg/dL, with an anion gap of 20 mmol/L and a serum bicarbonate level of 17 mmol/L. The rest of her serum electrolytes were within normal limits. The beta-hydroxybutyrate level was found to be 4.80 mmol/L. This was consistent with an anion gap meta-bolic acidosis, likely due to diabetic ketoacidosis. She was then admitted to the ICU for management with an insulin drip per DKA protocol. Her hemoglobin A1c levels were 15.5% which indicated severely uncontrolled diabetes. Over the next several days, she was found to have worsening digital ischemia (Figure 1), as well as new areas of ischemia involving the plantar surface of her left foot (Figure 2).

The x-ray of her right hand showed severe degenerative changes in the 2nd-4th distal inter-pharyngeal (DIP) joints with surrounding soft tissue swelling. Arterial duplex of the right arm was done, which indicated patent right upper extremity arteries. Computed tomography angiography (CTA) was done, to evaluate for a subclavian aneurysm and rule out thrombosis, and it showed no evidence of the same. She was evaluated by both the plastic and hand surgery teams who suggested medical treatment with daily aspirin and hydroxyurea. A preemptive diagno-sis of digital ischemia secondary to her uncontrolled diabetes mellitus and polycythemia vera was made and she was discharged with the expectation of an eventual auto-amputation with close follow up and strict management to achieve hyperglycemic control. 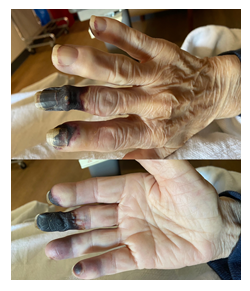 Figure 1: Patient’s right hand on examination several days after admission showed ischemia involving digits two to five of the right hand with dry gangrene of the distal one-third of the third digit. 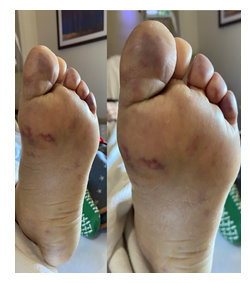 Myeloproliferative neoplasms, such as PV, induce a hypercoagulable state driving both arterial and venous thrombi. Patients with PV have significantly increased platelet-formed thromboxane, increased platelet activation, and subsequent thrombosis [6]. Arterial thrombi can occur in the large vessels (MI, CVA), or as with our patient, in the smaller distal vessels giving rise to peripheral vascular disease. In addition to PV precipitating thrombophilia, our patient was also an uncontrolled diabetic in active DKA. Although her blood counts are not alarmingly high enough to present with such severe ischemia, in the setting of her hyperosmolar dehydrated state it had catastrophic results.

Patients with underlying diabetes and insulin resis-tance are also at an increased risk of thrombosis due to a decrease in nitric oxide production via supper-ssion of PI3-kinase leading to impaired endothelial dilation, vasospasm, thrombosis, and inflammation. Furthermore, insulin-resistant adipocytes begin to produce a large amount of PAI-1 which leads to decreased fibrinolysis [7]. States of prolonged hyperglycemia and acidosis cause cell injury through the mechanism of oxidative stress, which provokes both hypoxia and ischemia. This cycle of cell injury and ischemia continues even after the acidosis in DKA has resolved [8]. Patients with PV and uncontrolled diabetes are at a higher risk for thromboembolism and ischemia attributable to the negative synergistic effects of both disease processes. PV patients should universally be placed on a daily low-dose aspirin to inhibit the profound thromboxane production by platelets [6]. According to guidelines, the target for management of PV should be to maintain the hematocrit under 45% and platelet counts under 400,000 per cubic millimeter which can be achieved with aspirin and therapeutic phlebotomy in most low-risk patients [9]. Patients at high risk require the addition hydroxyurea for its cytoreductive properties [10].

There are several other classes of drugs that have been used in select cases. An alternative cytore-ductive drug is interferon (IFN) -alpha. Though IFN-alpha is able to achieve cytogenic remission, many patients discontinue its use due to its side effect profile. Pegylated IFN-alpha has been shown to attain the same results and is much better tolerated with lower rates of toxicity [11]. Pipobroman is a derivative of piperazine which inhibits DNA and RNA polymerase and has been shown to be effective in PV management [10]. Patients who are refractory to all aforementioned treatments and continue to experience symptomatic splenomegaly and severe pruritus can be offered ruxolitinib, a Janus kinase inhibitor [12]. Surgical amputation of digits with dry gangrene can be considered, however, this is usually reserved for cases with superimposed infection. As with our patient, a non-infected digit with dry gangrene is excepted to autoamputate. The down side to this approach is extending the amount of time the patient continues to experience pain and discomfort. Additionally, while waiting for autoamputation to occur, the digit can develop an infection from being exposed to the environment [13].

PV is primarily managed with aspirin and cytoreduc-tive drugs, such as hydroxyurea. The increased blood cell counts in PV carry a risk of thromboembolism, which is augmented by the ischemic consequences of diabetic ketoacidosis. In patients with PV and known diabetes it is imperative to maintain tight hyper-glycemic control and prevent DKA to circumvent the escalated risk of ischemia and thromboembolisms.