Introduction: The generally accepted incidence of scoliosis in cerebral palsy (CP) is 20% to 25% and is directly related to the Gross Motor Function Classification System (GMFCS) level. One treatment option for neurogenic scoliosis is a double-shelled brace (DSB). The aim of this study was to investigate the degree of correction achieved when using three different replica techniques.

Materials and Methods: We included a consecutive series of 25 CP patients (8 boys, 15 girls) in this retrospective study. Mean age was 13.0 years (range: 4.0 to 20.0 years). All participants were non-ambulatory (GMFCS levels IV and V). The degree of immediate correction was expressed in percent of the lumbar and thoracic COBB angles.

The incidence of scoliosis in cerebral palsy (CP) varies greatly. Recent studies reported rates ranging from 6% to almost 100% [1-3]. The generally accepted incidence in the overall CP population is 20% to 25% [3]. The incidence is lowest in patients with athetoid type of CP (6%-50%) and highest in those with spastic CP (up to 70%) [4]. In patients with subluxated or dislocated hips (an indicator of disease severity), Madigan and Wallace observed an incidence of scoliosis of approximately 75% [4]. Pelvic obliquity is considered the key measure thus requiring more attention [1-3]. The incidence of scoliosis is also directly related to the Gross Motor Function Classification System (GMFCS) [5] level. Untreated scoliosis in patients with CP is associated with progression, and factors implicated in deterioration include the type of involvement (quadriplegia), poor functional status (non-ambulatory, GMFCS levels IV and V), and curve location (thoracolumbar) [1-3, 6]. The cause of scoliosis in CP is not entirely clear but is thought to be a combination of muscle weakness, truncal imbalance, and asymmetric tone in paraspinous and intercostal muscles [3].

Saito et al. described the risk factors for progression of scoliosis in spastic CP as follows: spinal curve of 40° COBB angle before the age of 15 years, total body involvement, bedriddenness, and presence of thoracolumbar curve [1]. Patients with these risk factors might benefit from early surgical intervention to prevent severe scoliosis. It is, however, known that bone growth is reduced under pressure and increased under tension, which may lead to rapid progression in severely affected patients (GMFCS levels IV and V). According to our experience, scoliosis mainly results from inadequate gravity control, which typically leads to lateral flexion of the thorax over the relative mobile spine, thus resulting in a thoracolumbar curve. Non-operative treatment options consist of observation and bracing but also include seating modifications and pharmacological management. There are two methods to provide external support to the spine in the presence of neuromuscular scoliosis: i.e. customized seating arrangements and braces (e.g. double-shelled brace; DSB) [2]. Most patients suffering from neuromuscular disorders present with poor balance control and dynamic instability of the trunk. At an early stage, the patient presents with dynamic instability of the trunk only, and this can be easily observed by asking for “hands up” while sitting.

The goals of any intervention are to maintain comfortable sitting and to allow functional use of the upper extremities. There is some evidence that the use of braces may slow curve progression in quadriplegic CP [7], but it is unclear whether spinal bracing reduces the need for surgery [2]. During growth, however, spinal bracing reduces the radius of the curve and slows the progression to severe curves [7]. Nevertheless, it is unclear whether bracing is able to stop progression [1-3, 7-11]. Thus, spinal bracing in children with CP is a well-described and established method of conservative management [7, 9, 10, 12-17]. Although botulinum toxin A is increasingly used to treat limb spasticity in patients suffering from CP, there is little evidence of its use in treating scoliosis [3].

The aim of this study was to assess the effectiveness of DSB in the treatment of neurogenic scoliosis with respect to the following:

In addition, we recorded the average time of DSB use per day and local complications, such as pressure sores.

This study was conducted according to local ethics requirements (KEK 2015; Berne, Switzerland) and the Declaration of Helsinki. Inclusion criteria were confirmed CP diagnosis, non-ambulatory status (GMFCS level IV or V), lumbar or thoracic COBB angles of more than 20° (or severe trunk instability), and age of 4 to 20 years. Exclusion criteria were painful dislocation of the hip, GMFCS levels I to III, or previous spine surgery.

Standardized antero-posterior (ap) radiographs were analyzed retrospectively. These pictures were recorded in a sitting position in all patients. In three patients, we obtained plain X-ray images in the standing position. Radiographs must not be obtained in the lying position because the maximum of the curve is not visible in this position due to absent gravity force. The apex as well as lumbar and thoracic COBB angles were calculated from the ap radiographs. All angles were measured using Centricity DICOM Viewer V3.1. At the same hospital appointment, two radiographs were obtained: We obtained the first radiograph (T1) using the brace (DSB), and after 5 min (T0), we obtained a second X-ray without application of the brace. This was possible only for patients with good and correct adaption of the DSB. For other patients, the time period between T1 and T0 was no longer than 3 months due to the need of adaptations of the DSB by the orthotechnician. The degree of correction of the COBB angle at the levels of the lumbar and thoracic spine was expressed as percent of the measurement without the brace at T0.

A DSB was used in all cases as described by Rutz et al. in 2013 [19]. This is a custom-made brace (Figure 1) that is easy to handle. The parents or caregivers were advised to apply the DSB to the affected patient for 6 to 8 h per day, in positions allowing gravity to influence the curvatures of the spine, such as the sitting or standing positions, but not during sleeping and lying. 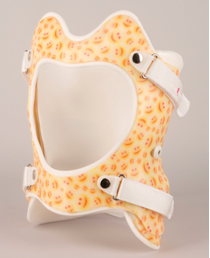 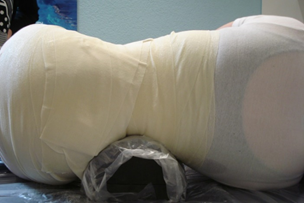 For the statistical analysis of the data, we used JMPâ Version 10.0.0 (SAS Institute, Cary, NC). All data were analyzed for normal distribution by using Shapiro-Wilk-Test. A paired t-test was used to compare the data obtained in the presence and absence of DSB. A one-way ANOVA was performed to detect differences between the replica techniques A, B, and C. In cases of statistical significance, a post-hoc Tukey test was used. The level of significance was set at α=0.05. A priori power calculation was used to estimate the required sample size. Previously reported data [19] on the conservative treatment of spinal deformity were used to calculate the corresponding effect size for our population (effect size=1.04). A priori power analysis with α=0.05 and β=0.80 indicated a minimum sample size of 10.

All included patients were able to participate in our study. In patient No. 9, the lumbar curve deteriorated from an initial COBB angle of 50° to 60° within a time period of 3 months. Patient No. 15 exhibited a lumbar curve of 15° but additionally suffered from severe trunk instability. For this reason, this patient  was included in the study.

3.3 Effects of the replica techniques on the lumbar spine

3.4 Effects of the replica techniques on the thoracic spine

Parents or caregivers reported a median daily use of DSB of 6.7 h (range 6 to 10 h). Temporary skin redness was noted in 10 patients (40%). None of the patients experienced deep pressure sores.

Figures 3 and 4 show the clinical and radiologic findings for an 18-year old woman (case 17). Figure 3 represents the clinical photographs with and without the DSB. Figure 4 shows the radiographs of this patient without (a) and with (b) the DSB.

Figure 3: Clinical photographs without and with the DSB. 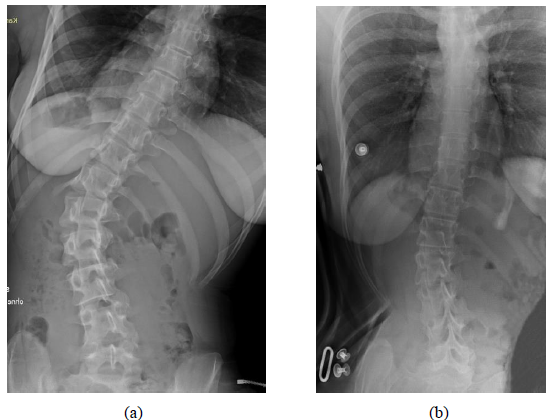 Figure 4: Radiographs of patient (a) without and (b) with the DSB.

Terjesen et al. reported the results of treatment with spinal orthoses in 86 patients with spastic quadriplegic CP [7]. Their scoliotic deformities were treated with custom-molded, polypropylene thoraco-lumbar-sacral orthoses. The mean initial COBB angle was 68°, and mean correction in orthosis was 25°. In our study, the mean degree of initial deformity was lower, but the extent of correction was similar. In the study of Terjesen et al., long-term follow-up of 6.3 years was obtained. The authors reported a mean progression rate of 4.2° per year. However, spinal orthosis bracing does not delay the rate of curve progression.

There were several limitations of our study. We included a small number of young CP patients, and long-term results are missing since we investigated the immediate (short-term) effects only. Moreover, the influence of pelvic obliquity and hip pathology was not taken into account. For the reporting of the time of daily DSB use, we refrained from using skin sensors and relied on parent or caregiver reports. The type of replica technique used did not seem to influence the short-term outcome of spinal bracing. Clinical experience and manual work of the orthotechnicians appear to be more important. We postulate that optimal correction of the COBB angles at the level of lumbar and thoracic spine should be achieved from the beginning of bracing therapy, especially in young children with neurogenic scoliosis using a DSB.

Use of DSB provided excellent immediate correction of neurogenic scoliosis in our cohort of young CP patients. Both the lumbar spinal and thoracic deformities were markedly corrected, and all three replica techniques achieved statistically significant corrections of the COBB angles. Further studies are required to investigate long-term outcomes of these techniques.