Feto-Maternal Incompatibility in the ABO System at EHS Nouar Fadela

Introduction: Fetal-maternal blood incompatibility (IFM) is one of the major causes of neonatal jaundice that can progress to kernicterus.

Objective: To determine the frequency and the titre of anti-A and anti-B hemolysins in women in the immediate postpartum period as well as the associated risk factors.

Patients and methods: The study is cross-sectional conducted in mothers and their newborns from January 1 to October 31, 2019. ABO blood groups were determined in all participants. In mothers, research and titration of hemolysins was done. Pearson's chi-squares were used for statistical tests. A p value <0.05 was a statistically significant difference.

Conclusion: It is necessary to introduce systematic research for hemolysins among immunohematological monitoring tests in pregnant women and their implication in newborns.

Erythrocyte fetal-maternal incompatibilities (IFME) are defined by the binding of maternal alloantibodies to fetal red blood cells, antibodies transmitted during pregnancy and which target the fetal blood group antigens, of paternal origin [1]. The immune complexes thus formed cause tissue immunohemolysis. In newborns, hemolytic syndrome manifests itself in two ways: anemia that can begin in utero and continues for several weeks after birth, and early and rapidly increasing hyperbilirubinemia (jaundice) after birth [2]. Neonatal jaundice is a common observation (65 to 70%) [3] in maternity and neonatal wards. They are associated with infant morbidity and mortality. They are the most common cause of newborn readmission to hospital [4]. These neonatal jaundices can cause kernicterus. If the newborn victims of this acute phase manage to survive, in the long run they can develop chronic encephalopathy. This condition is marked by deafness and mental retardation [5].

The diagnosis of jaundice amounts in practice to that of exclusion. Management remains an important activity of maternity pediatricians and health professionals in neonatal services [6-9]. Hemolytic jaundice due to feto-maternal incompatibility has two dominant aetiologies: first, the immunization of the rhesus negative mother against the D antigen. This is the best known and the best studied. It is becoming rare nowadays thanks to systematic prophylaxis. Secondly, immunization in the ABO system (case of an O mother carrying a group A, B or AB fetus). The latter not only represents the largest cause of neonatal hemolytic disease today, but is relatively little known [2]. Unlike natural anti-A and anti-B antibodies, immune antibodies are highly hemolyzing by their ability to trigger the complete complement cascade. We thus speak of hemolysins. They are further characterized by maximum activity at 37°C and are IgG in nature. The latter are able to cross the fetoplacental barrier and cause hemolytic disease in the newborn. They are difficult to absorb by soluble A and B antigens [10, 11]. In addition, it has been suggested that the greater frequency of hemolytic diseases of the newborn (HNDM) in Africans is due to the very high activity of anti-A and anti-B hemolysins in individuals of blood group O [12, 13] in about 5% of all newborns [14-18]. In view of these results, it was interesting to research the frequency of these hemolysins in women whose term newborns suffered from early and prolonged jaundice (jaundice persisting up to 11 days of life) in relation to with fetal-maternal incompatibilities and establish a link between the hemolysin level in the mother and the degree of jaundice in the child. This in order to increase the capacity for diagnosis and management of hemolytic jaundice in newborns linked to incompatibilities in the ABO system.

Type and location of the study: the study is cross-sectional, carried out in mothers and their newborns from January 1 to October 31, 2019. ABO blood groups were determined in all participants. In mothers, research and titration of hemolysins was done. Pearson's chi-squares were used for statistical tests. A p value <0.05 was a statistically significant difference.

2.1.1 Inclusion criteria: The study population consisted of any woman of blood group "O" in the neonatal department with one or more term newborns and of different blood group "A, B, or AB" presenting with precocious jaundice (onset within 24 hours of life) or prolonged (persisting until the 11th day of life).

2.1.2 Non-inclusion criteria: Stillbirths (difficulty in determining their gestational age) and newborns whose maternal grouping is compatible. We developed fact sheets that were carefully completed through an interview with the mother. These consist of three parts-

Informed consents were obtained from parents before inclusion (parents and children) in the study.

Data entry as well as descriptive and analytical data analysis were performed using Statistical Package for Social Sciences (SPSS) version 20. Quantitative variables were presented as mean and standard deviation and qualitative variables expressed as a percentage. Chi2 test was used for comparison of results. The cutoff of p<0.05 was considered statistically significant.

A total of 120 samples were taken from children with jaundice and their mothers. Of the 120 mothers included, the mean age was 30.63 ± 6.33 years. The multiparts were the most represented with a proportion of 64.4%. Evolution of labor and decision on the mode of delivery. The majority of NN deliveries were via the upper route, i.e. 69.5%. 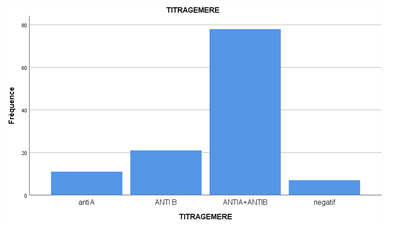 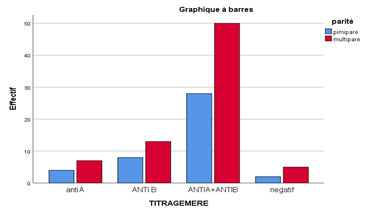 Figure 2: Distribution of hemolysins according to parity.

Our study aimed to determine and quantify hemolysins in mothers primarily of blood group "O" whose children of blood group A, B or AB, presented a precocious or prolonged jaundice. We retained in this study 120 couples (mothers and children). This size is smaller than that found in studies [18]. This is explained by the fact that these authors looked for hemolysins in all women in the immediate postpartum period and in a situation of blood incompatibility in the ABO system, not taking into account the jaundice of the child. However, our study only included women who had jaundiced children. In addition, the 120 icteric newborns retained during the study period show the extreme rarity of hemolytic diseases of the newborn at EHS NOUAR FADELA. This rarity is confirmed by a study carried out in Sarajevo in 2013, which revealed that in ABO incompatibilities, 15% of pregnancies of mothers of blood group O give birth to children of group A or B.

According to this study, the frequency of Hemolytic diseases of the newborn related to the ABO system is rare and occurs in 1/150 pregnancies [19]. Moreover, in this study, the ABO disparity represents 98.3% of the total samples taken. This is important to the results of Badiee [20] and Sanpavat [21] who reported ABO incompatibilities in the respective proportions of 22.0% and 21.3% of cases and also by the work of Izetbegovic [1].

The newborns most represented in this study are those of 02, 03 and 04 days of life with respective appearance percentages of 30%, 50%, 25%. This could be explained by the non recognition of the jaundice and/or by the negligence of this one in these beginnings. This also agrees with the work of Poissonnier who attests that the clinical diagnosis is typically evoked in the face of precocious jaundice (before 48 hours of life) [15] not only caused by hemolysins [22-27], but that bacterial infections were arguably the most common cause of neonatal jaundice [28], followed by bile duct atresia [29]. The anti-A hemolysins were the most represented, i.e., 11.76% compared to the anti-B with 2.94%. These results agree with those demonstrated by Tissier et al. in 1996. We thus agree with Cortey that the low ABO antigenicity of fetal erythrocytes and the existence of these same antigenic sites in other cellular systems reduce the severity of this type of alloimmunization [2]. This result invalidates that of Fopa et al. in 2014 at CHUY [18] which also attest that the highest titers were those of anti-A haemolysins. [15]. A high prevalence of anti-B hemolysins compared to anti-A hemolysins was noted in this study. All of these studies showed a strong simultaneous presence of anti-A + B IgG compared to that found in our study. This may be due to different risk factors which depend on the environment (heteroimmunization).

Although the prevalence of anti-B hemolysins was higher than that of anti-A hemolysins, the titers of anti-A and anti B hemolysins were higher than those of anti-B and A hemolysins. This is consistent with the results obtained in other studies [30, 31]. In fact, black Africans are more sensitive to B antigens (or B-like substance) than to A antigens (or A-like substance), on the other hand the hemolyzing power of Anti-A hemolysins would be stronger than that of anti-B hemolysins. This racial difference was first demonstrated in Zimbabwe by Adewuyi et al. [32] then by Adewuyi and Gwanzura [33]. From a biochemical point of view, antigen A (N-acetylgalactosamine) would be more immunogenic than antigen B (galactose) because of its amino group, because proteins are more immunogenic than carbohydrates; hence the higher prevalence of hemolytic disease of the newborn due to anti-A hemolysins [33]. Marriage was the only socio-demographic characteristic significantly associated with the presence of hemolysins. This is because parity, which is one of the most important risk factors, is higher among brides than among single people. However, the high frequency of hemolysins in mothers over 25 years old can be explained by the high representativeness of these groups in our study population.

Of all the characteristics of reproductive life, there was a significant association only between parity and the presence of hemolysins. Thus, among the mothers having hemolysins, 58.3% were multiparous. This could be explained by the fact that during childbirth, the risk of passing fetal red blood cells into the maternal circulation is higher. Multiparity is found to be one of the most important factors in maternal fetal alloimmunization. In mothers with hemolysins, most had been of an O blood group. In fact, the immune antibodies of the ABO system are predominantly of the IgM type in individuals of blood group A and B whereas in individuals of blood group O, these antibodies are largely dominated by IgG [30]. Regarding IFM ABO, 98.3% of mothers with hemolysins gave birth after an ABO incompatible pregnancy. These results are consistent with those obtained in Nigeria [30]. ABO fetal-maternal incompatibility is therefore found to be the main factor associated with ABO alloimmunization in women. However, the statistical difference was significant between IFM ABO and the titre of anti-A hemolysins on the one hand and those of anti-B hemolysins on the other hand (p=0.05). This supports the hypothesis that ABO-fetal-maternal incompatibility is the main factor in ABO-fetal-maternal alloimmunization [33].

At the end of this study, the general objective of which was to highlight the role of anti-A and anti-B hemolysins in fetal-maternal incompatibilities in relation to neonatal jaundice. We have noted a high proportion of hyper bilirubinemia in our target population, requiring much more vigilance on the part of healthcare personnel. Likewise, incompatibilities in the ABO system between the mother with blood group O and the child with blood group A, B and AB should not be overlooked. Knowledge of the blood group of the mother-child pair, the hemolysin test in the mother and the direct Coombs test in the child on the first day of life are important for the prevention and management of jaundice linked to incompatibilities maternal fetuses in the ABO system.