Methods: Single center retrospective study, analyzing the incidence and outcome of de novo cancers in kidney transplant recipients with and without pre-existing cancer from 01.01.1981 through 31.12.2018.

Results: The incidence of eligible transplant candidates with pre-existing malignancies increased over the last 40 years, primarily due to diagnosis of limited disease during the pre-transplant evaluations. Outcome is good with comparable graft and patient survival. Incidence of recurrent or secondary de novo cancers is low. The average annual incidence of de novo malignancy is 1 per 100 patient years in the post-transplant follow-up. In the last decades, the incidence of kidney cancers decreased, while lung cancers and post-transplant lymphoproliferative disorder (PTLD) increased. The outcome of malignant disease was poor, notably in patients with disseminated disease at presentation and mainly attributed to cancer-related death. Meanwhile, graft losses were rare after diagnosis of de novo malignancy.

Conclusions: In summary, the incidence of pre-existing and de novo solid cancers increased within the last four decades in our transplant cohort. Patients with pre-existing cancers have an excellent outcome and – if well selected – should not be excluded from transplantation. Meanwhile, de novo cancers after transplantation are associated with poor outcome.

Kidney transplantation (KT) is the preferred form of renal replacement therapy with improved survival and morbidity when compared to long-term maintenance dialysis [1, 2]. The benefit predominantly arises from reduced risk for cardiovascular events in transplant recipients compared to dialysis patients [3]. Meanwhile, the risk for infections or cancers is increased in transplant recipients, mainly due to the need of long-term immunosuppression [4, 5]. Common malignancies after transplantation are skin cancer, lymphoma, lung, liver and renal carcinoma [6-8]. Most disseminated cancers progress rapidly in transplant recipients with poor therapy response and outcome [9, 10]. Consequ-ently, pre-transplant malignancy (PTM) has long been considered an absolute contraindication for transplant listing given the likely increased rate of recurrence under long-term immunosuppression and hence poor outcome. Nowadays, the spectrum of transplant candidates has significantly changed with a higher rate of older and multimorbid patients, some of whom suffer from incidental and organ-limited malignancies [11]. Furthermore, improved screening tools and emerging cancer therapies led to a higher prevalence of patients with non-limiting malignant diseases. Therefore, the absolute contraindication of cancer history for KT needs to be re-evaluated. While there is a large body of evidence for the risk and outcome of de novo malig-nancy after transplantation, relatively little is known about the outcomes of transplant recipients with a positive cancer history [4, 5, 12]. More than three decades ago, the Israel Penn International Transplant Tumor Registry reported an overall rate of cancer recurrence in transplant-recipients of 21% [13]. More contemporary registries have reported lower recurrence rates [14, 15]. The aim of this study was to determine the incidence and outcome of de novo solid cancers in 1400 consecutively kidney transplanted patients with or without previous history of malignancy from a single center over a time period of almost four decades.

2.1 Study population: All KT performed at the University Hospital of Bern between 01.01.1981 and 31.12.2018 were considered. Recipients were stratified in two groups, namely patients with and without PTM, respectively.

2.2 Data collection: Recorded baseline data included recipient characteristics (age, sex, first malignancy and stage of first malignancy (categorized as organ limited or restricted to the draining lymph nodes versus disseminated), allograft and patient survival and cause of death. Patient history was taken from clinical records before and after KT. For the vast majority of patients, results from annual visits or reports from referring nephrologists. Patients were censored at time of graft loss or death, which ever event appeared first. Non-melanoma and non-Kaposi skin cancer were not considered as relevant malignancies in this study, neither before KT, nor in the follow-up. For the192 patients requiring re-transplantation, pre-existing cancers were only considered for the first KT. The study was approved by the local ethics committee.

3.1 Incidence and outcome of KT patients with pre-existing malignancy over time

Among the 1400 KT recipients, we identified 66 patients (4.6%) with malignancies before transplantation. The most frequent cancer entities were gender-specific malignancies, including breast, uterine and ovarian cancers in females and prostate cancer in males (18 cancers, 27.7% of patients), followed by malignancies of the kidneys and urinary tract (16 patients, 24.6% of patients). The remaining cancers were relatively infrequent as shown in Figure 1A. Among the cancers identified, 61% of diseases were detected incidentally, mostly during routine evaluation for transplant listing. Meanwhile, 39% of cases represented as symptomatic cancers. In four patients the kidney disease was a direct consequence of the cancer treatment (three times chemotherapy-associated nephropathy, once bilateral renal nephrectomy). At time of listing, 100% of patients were in clinical remission with a mean delay between last treatment and KT of 9.25 +/- 11.96 years (range: 0.2 – 33.6 years) (Supplementary Table 1).

We identified 143 (10.2%) solid organ cancer incidences after KT in the entire cohort, among those 7 (5%) with a cancer recurrence or secondary de novo cancer and 136 patients (95%) with a primary de novo cancer. The most frequent cancer entities were lung cancer (19%), lymphoma (16%) and cancers of the kidney/bladder (13%) (Figure 2A). Three out of seven patients had recurrence of a previous malignancy (one patient with breast cancer recurrence, two patients with kidney/bladder cancer) and 4/7 de novo secondary cancers (one patient with stomach cancer, one patient with lung cancer each and patients with breast cancer). Median time from KT to cancer diagnosis was 2.04 years (range: 0.38-4.84 years) for the group with cancer history and 7.7 years (range: 0.1-33.8 years) for the group without (Figure 2B). We then analyzed staging and outcome of the entire population of patients with post-transplant cancer diagnosis. Incidence of de novo cancer after KT stayed stabile across the observational cohort with 0.7 per 100 patients/years for disseminated malignancies and 0.5 per 100 patients/years for limited disease (Figure 2C). Among all cancers detected, 70% were limited, i.e. organ-restricted or manifest in draining lymph nodes, while disease was advanced and disseminated in the remaining 30% (data not shown). Outcome was poor for all patients, with a 1- and 3-year survival of 98% and 97% for patients with limited and 77% and 66% survival for patients with advanced disease (Figure 2C). Graft-losses were infrequent observations, although immunosuppression was tapered in a majority of patients after cancer diagnosis (Figure 2D). In summary, in patients with post-transplant cancer, the reason for failure (death or return to dialysis) for patients with de novo malignancies during their follow-up was as follows: cancer-related death 81%, non-cancer related death 18% and graft loss less than 1%. No patient was re-transplanted.

3.3 Incidence and treatment response of de novo cancer over time

Averaged annual incidence was 1 per 100 patient years and this rate increased from 0.6 in the 80s to 1.2 in recent years. The annual incidence of de novo malignancies after KT was as follows. 0.22% for lung cancer, 0.18% for lymphoma, 0.05% for gender specific cancers. Comparing incidence rates over time elicited a strong decrease of kidney and bladder cancer, while the incidence of lung cancer and lymphoma increased modestly. One- and 3-year patient survival after cancer diagnosis increased for limited cancers from 60 to 80% during the observation period, while survival for disseminated cancer increased from negligible values to around 30%.

Figure 1: Incidence of pre-existing malignancies in KT patients: (A) specificities of identified PTM, (B) annual incidence of organ limited and disseminated malignancies during the observational period. Logistic regression of factors associated with PTM after correction for relevant co-factors as described in the methods sections. (C) Patient survival after KT in patients with (blue) and without PTM. 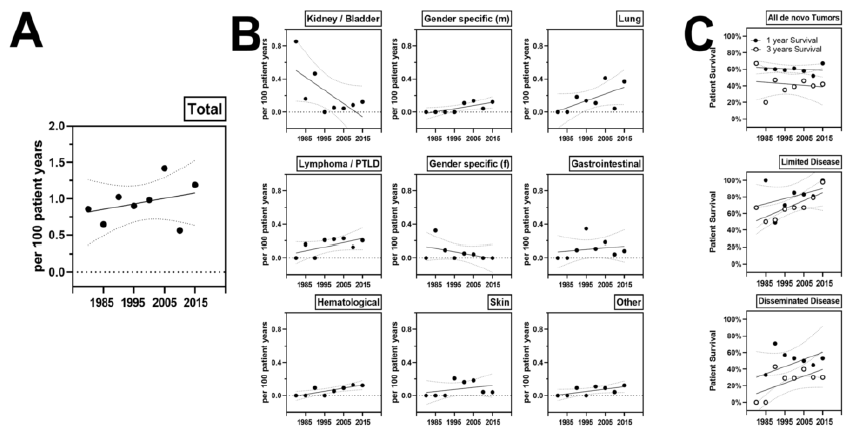 In our study, we describe malignancy as a relevant co-morbidity in the KT follow-up affecting more than ten percent of recipients. Although most patients experienced de novo malignancies, whereas recurrent or secondary cancers were relatively rare. This low incidence of cancer recurrence needs to be correlated with competing morbidity and mortality, when defining waiting time for cancer patients. Indeed, annual mortality of dialysis patients with diabetic and/or renovascular disease is as high as 23% [16], which may be substantially higher than the cancer-related risk of dying in patients with organ-limited malignancies such as prostate or kidney cancer with complete oncosurgical treatment and regular follow-up. Therefore, cancer waiting time must be treated individually based on tumor type, treatment and underlying renal disease, co-morbidities, dialysis effectiveness and tolerability.

Interestingly, while the annual incidence of de novo cancer remained relatively stable across the observational period, the contribution of individual entities to the cancer burden changed over time. The incidence of renal cancer clearly decreased over time, likely due to the marked reduction of phenacetin-nephropathies in the last decades [17]. Meanwhile, we report a substantial increase of lung cancers and lymphomas over time, likely due to manyfold reasons, among others increased age of KT candidates and patients, revival of depleting induction therapy and increased basal immunosuppression, including higher CNI C0 tough levels and triple immunosuppression. In our cohort, outcome of patients with de novo malignancies was poor, notably for patients with advanced and disseminated disease at time of diagnosis. Our data suggests, that cancer control and mid-term survival somewhat improved over the last decades. Meanwhile, deteriorating and failing allografts were no substantial complication in KT patients with active malignancies. This is in line with our clinical experience, that acute kidney injury and rejections are relatively rare events in recipients with malignancies, even when immunosuppression is substantially reduced and surgery and/or chemo- or radiotherapy is required.

In recent years, immune checkpoint inhibitors have emerged as effective cancer therapies for certain entities, such as melanoma, lung and renal cancer [18]. These substances actively intervene with immune regulation and provoke a – more or less specific – immunoreconstitution. Early, severe and treatment-refractory rejection of renal allografts are common with very poor allograft outcome. Given the poor prognosis of KT-patients with active cancer, it is likely, that effective cancer immunotherapy should be favored over conventional chemotherapy, even when graft loss is likely. Novel immunosuppressive treatment regimens are emerging in kidney transplantation, including Belatacept [19], Iscalimab [20]. mTOR inhibitor based treatments [21] and others. Currently, it is not known if such treatments influence long-term cancer incidence after KT. It is possible that such regimens harbor risk for specific cancer types, such as the risk for PTLD in EBV naive recipients treated with Belatacept [22]. Alternatively, it remains unclear if such novel therapies increase or decrease malignancies in the post-transplantation period. Here, large registries are mandatory to capture emerging cancer incidences. While our study is a comprehensive cohort analysis covering all transplant recipient of almost four decades, it clearly has limitations. Importantly, not all screened transplant candidates were identified, but only patients who subsequently received KT. Likely, waitlisting and KT was denied to some candidates due to their cancer history or an active disease. Furthermore, our data should be compared with a comprehensive cohort with advanced chronic kidney disease and/or dialysis cohort in respect of cancer incidence and outcome.

Pascal Zimmermann: Participated in data acquisition, performance of the research, in data analysis, in the writing of the paper.

Dusan Harmacek: Participated in data acquisition, in performance of the research.

Fabian Hauenstein: Participated in data acquisition, in performance of the research.

Andrea Karolin: Participated in data acquisition, in performance of the research, in data analysis.

Vanessa Banz: Participated in the study conception and design, in the writing of the paper.

Daniel Sidler: Participated in study conception and design, in data acquisition, in data analysis, in the writing of the paper.

Supplementary Table 1: Baseline Characteristics of KT recipients with and without pre-existing cancers. KT from 01.01.1981 through 31.12.2018 were considered.