Here, we report a rare occurrence of intestinal obstruction immediately following insertion of a VP shunt. Obstructive hydrocephalus is often treated by ventriculoperitoneal shunt. Common complications following the procedure are: infection, obstruction of the shunt itself, failure of a valve and over or underdrainage of a ventricle. However, intra-abdominal complications are rare, and intestinal obstruction as a result of the shunt is very rare. Early diagnosis and management in such cases provides good quality of life.

Obstruction at any point along the CSF pathway may result in hydrocephalus, which is often treated by ventriculoperitoneal shunt (VP). Common complica-tions following the procedure are: infection, obstruction of the shunt itself, failure of a valve and over or underdrainage of a ventricle. However, intra-abdominal complications are rare, and intestinal obstruction as a result of the shunt is very rare. Here we report a rare occurrence of intestinal obstruction immediately following insertion of a VP shunt.

A 5 month-old boy presented with developmental delay and increasing head size since 3 months of age. He was born at 36 weeks of gestation to nonconsanguious married couple, third in order, with birth weight of 2.6kg. He had bacterial meningitis during neonatal period for which he was treated with antibiotics and anticonvulsants. There was no history of birth asphyxia. Antenatal scan was normal. At presentation, the child was irritable, had large head with bulged fontanelles, head circumference of 54 cm, positive sunset sign and frontal prominence. He had hypertonia and exaggerated deep tendon reflexes, extensor plantar reflex. Neuro imaging revealed obstructive gross hydrocephalus with aqueduct stenosis. He was managed with ventriculoperitoneal shunting and supportive care. In the Immediate post-operative period, the child was hemodynamically stable and feeds were started.

After 18 hours, he developed abdomen distension. In view of increasing abdominal distension and absent bowel sounds; erect xray abdomen was done which showed multiple air fluid levels in the abdomen (Figure 1). Abdominal ultrasound showed dilated bowel loops with aperistalsis. As there was small bowel obstruction secondary to kinking of the VP shunt, gastric decompression was done using nasogastric tube and elective explorative laparotomy was performed as distension persisted. Intraoperatively, it was noted that there was subcutaneous herniation of the bowel loops at the site of previous incision with dilated proximal bowel and collapsed distal loops (Figure 2). Peritoneal portion of the shunt was found repositioned in the peritoneum in a separate rent formed. The child started tolerating oral feeds from the next day and discharged on full feeds on 4th day. 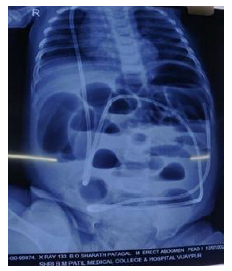 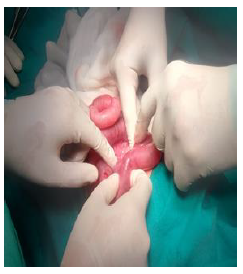 Ventriculoperitoneal shunt surgery is the most commonly used technique for the management of hydrocephalus in paediatric cases [1]. Causes of VP shunt-related intestinal obstruction are varied, volvulus is the most common cause, because of the fact that volvulus is a relatively common problem in the pediatric population [2]. Mechanical obstruction due to twisting of the catheter is the second most common cause. Usually present early after surgery.

At sometimes obstruction occur as a loop of the shunt catheter tightens around a bowel loop during removal [3, 4]. Although intestinal obstruction is a rare complication of a VP shunt, it should be considered in the presence of abdominal symptoms and treated accordingly.