Klippel-Feil-Sequence originally described by Klippel and Feil in 1912, the cervical vertebrae are usually fused, although hemi-vertebrae and other defects may also be found [1]. The classic triad of KFS is decreased movement in the affected area, a short neck, and a low hairline. This classic triad is found in less than 50% of patients with KFS. In addition, many other abnormalities associated with KFS have been described, including brainstem malformations, scoliosis and webbing of the neck, spina bifida, Sprengel deformity, deafness and cardiovascular and renal abnormalities [2].

Our case is a 38-weeks female neonate who was a product of cesarean section and had normal extra uterine transition with normal APGAR scores. In the first few hours of her life, she developed mild respiratory distress that necessitated supplemental oxygen in the first few hours. The mother had no antenatal complications. There was a history of second degree consanguinity between parents without any history of congenital malformation in the family or previous pregnancies. On examination, the neonate had a short neck, low posterior hairline and restricted neck mobility; this was along with a soft mass in the posterior neck region, measuring about 2 × 2 cm (Figure 1 and 2). On respiratory system examination mild intercostal and sub-sternal recessions were seen. On auscultation, bilateral crepitation was found. On CNS examination neonatal reflexes were sluggish. Abdominal examination was normal apart from palpable both kidneys. Lateral view neck X-ray revealed a fusion of multiple cervical vertebrae. Chest X-ray showed features of transient tachypnea of newborn. Echocardiography show normal findings apart from patent foramen ovale. MRI showed inferior cerebellar tonsils herniation (Chiari malformation), multiple fused contagious cervical vertebrae and small dermal sinus at the base of skull connected to small bulging meningiocele about (18 × 13 mm) (Figure 3). 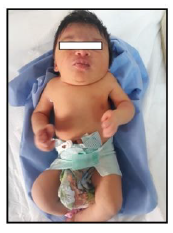 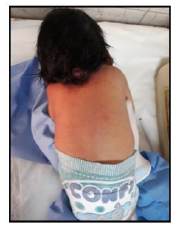 Figure 2: Clinical photograph showing low posterior hairline and 2 × 2 cm mass in the back of the neck. 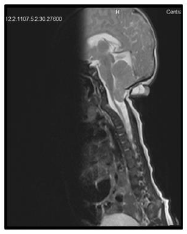 Figure 3: Fused cervical vertebrae and small dermal sinus at the base of skull connected to small bulging meningiocele of (18 × 13 mm). 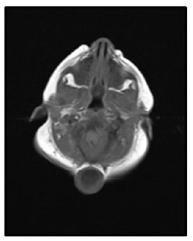 Figure 4: Fused cervical vertebrae and small dermal sinus at the base of skull connected to small bulging meningiocele of (18 × 13 mm).

Congenital cervical fusion is a result of failure of normal segmentation of the cervical somites during the third to eighth week of life. The skeletal system may not be the only system affected during this time; cardio respiratory, genitourinary, and auditory systems frequently are involved. In most patients, the exact cause is unknown. One proposed cause is a primary vascular disruption during embryonic development that results in fusion of the cervical vertebrae and other associated anomalies. Studies have suggested that this may be an inherited condition in some patients and have found autosomal dominant inheritance in those with C2-3 fusion [3]. Pathogenesis of the disorder likely involve various dominant and recessive genetic mutations, including GDF6, GDF3, MEOX1, and RIPPLY2 which are responsible for transcription regulation and signaling pathways involved in somite development during embryogenesis [4-5]. Although the prevalence of KFS is very low, it has been related to various anomalies and to fetal alcohol syndrome [6]. Several congenital problems have been associated with congenital fusion of the cervical vertebrae, most commonly scoliosis, renal abnormalities, sprengel deformity, deafness, synkinesis, and congenital heart defects.

Scoliosis is the most frequent orthopedic complication with about 60% of patients. Renal abnormalities and deafness Occur in approximately 30% of patients. Both sprengel deformity and synkinesis (mirror movements) Occurs in approximately 20% of patients. Cardiovascular Anomalies are found in 4% to 14%, and ventricular septal defect is considered as the most common cardiovascular anomaly [3]. Several authors report the association of partial or complete conductive hearing impairment, underdeveloped low-set ears and facial asymmetry in patients with type II KFS [7]. In the present case, we have found chiari malformation, meningiocele, sprengel deformity and there were no evidence of renal disease and congenital heart disease. The present case has classical triad low posterior hairline, short neck and limited cervical range of motion. The classification system recently proposed by Samartzis et al. defines the cervical spine fusion patterns for patients with KFS. The classification is determined radiographically such that Type I patients are defined as having a single congenitally fused cervical segment. Type II patients have multiple, noncontiguous congenitally fused segments, and Type III patients have multiple contiguous, congenitally fused cervical segments [8]. Under this proposed classification, our patient would be classified as a Type III KFS.

3.1.1 Non-Operative management: Non-Operative management, which is conservative and symptom driven. Those with 1 or 2 level fusions below C3 are monitored and treated conservatively. They may play contact sports such as hockey and rugby. Patients who are high risk due to spinal deformity can undergo activity modification. Those with a fusion above C3, especially to the occiput, should avoid contact sports and are more likely to be symptomatic. This also true for those patients with long fusions of the cervical spine. Importance should also be placed on the poly-syndromic presentation of patients. Pediatricians can link a variety of specialists into the care cycle for cardiac, renal, or gastrointestinal congenital abnormalities. This interdisciplinary care becomes even more vital if patients are considered to be operative candidates.

3.1.2 Operative management: For patients with persistent neurological pain, myelopathy, new onset muscle group weakness, and documented spinal instability can be considered operative candidates. Surgical decision making is driven by both spinal deformities as well as instability. Cervical fusion can occur from either anterior or posterior approaches secondary to evaluation [9].

All the cases of KFS should be thoroughly investigated with appropriate screening tests, including brain MRI to exclude any associated condition such as Chiari malformation, and also to formulate further management. The disorder should be diagnosed, timely, to provide close follow-up and appropriate therapy and counseling to family. The parental counseling should be done in all such cases; therefore, the patient was encouraged to continue routine follow-up to evaluate for future development of neurological deficit or other complications.