5Professor and Chairman, Department of Orthopaedic Surgery and Traumatology, Hospital and University of Fribourg, Fribourg, Switzerland

Introduction: Monteggia fracture is defined as a fracture of the proximal third of the ulna with associated dislocation of the radial head. According to the Bado classification, 4 types are differentiated. These fracture types are rare in both adults and children, reaching an incidence of 1.5 - 3% of all pediatric forearm fractures. Anatomic reduction and retention of ulnar fracture and radial head dislocation is the primary aim. If surgery is indicated, various methods can be used. However, it is not known whether one is superior to the other. In very proximal ulnar fracture with radial head dislocation, it is not known whether retrograde nailing provides effective retention of the fracture. Our hypothesis is that closed retrograde nailing is a safe method in the treatment of proximal Bado type I-III in children.

Materials and Methods: For this retrospective case series, all pediatric patients were included who suffered a proximal Bado fracture between November 2000 and August 2019. Demographics, injury patterns, details of surgical treatment, and radiographs were obtained from medical records.

Results: Results: Six pediatric cases (two to six years old, two girls and four boys). They all had a proximal Bado fracture. Closed reduction and retention using retrograde nailing of the ulna was performed in all cases. There were no infections, vascular or nerve injuries. There was one reoperation due to incorrect application of the technique. All patients were pain free and had the same range of motion as on the contralateral side.

Conclusion: Indirect reduction and intramedullary retrograde nailing is a minimally invasive technique that do not affect the blood supply of the bone and soft tissues. This technique allows for safe treatment of Bado type I-III fractures in children.

Monteggia fracture [1] is defined as a fracture of the proximal third of the ulna with associated dislocation of the radial head. According to the Bado classification, 4 types are differentiated [2]. These fracture types are rare in both adults and children, reaching an incidence of 1.5 - 3% of all pediatric forearm fractures [3]. The primary goal of treatment is anatomic reduction of the ulnar fracture and associated indirect anatomic reduction of radial head dislocation. Various methods of treating Bado fractures in children have been reported [4]. The most common method is nonoperative and consists of manual reduction of the ulnar deformity of the elbow and immobilization in flexion and supination in a long-arm cast [5]. Due to the frequent plastic deformation and shortening of the proximal ulnar fracture, re-dislocation of the radial head may occur in the course. This is a major complication of conservative therapy and can lead to mechanical impingement with decreased pro-supination or flexion, deformity, and instability, as well as tardive paralysis of the ulnar nerve and/or radial nerve. Therefore, regular checks by X-ray are required [6]. If there is doubt for a subluxation position of the radial head, surgical treatment is indicated.

A safe but invasive surgical technique is an open reduction and internal fixation using a plate and screws [7, 8]. Lim and Huntley [9] described the use of anterograde intra-medullary stack nailing to reduce proximal plastic deformity in pediatric Bado fractures. However, this has the disadvantage of passing the wires through the apophysis and triceps insertion. Rockwood et al. [4] and Dietz et al. [10] mentioned the possibility of retrograde nailing to treat this type of fracture. Schmittenbecher [11] published a brief instruction on how to perform closed reduction and internal fixation with an intramedullary nail (IMN). However, there are no step-by-step instructions for reduction and stabilization of pediatric Bado Type I-III with proximal ulna fractures using a retrograde intramedullary nailing technique.

Our hypothesis is that closed retrograde nailing using modified technique is a safe method in the treatment of proximal Bado type I-III [2] in pediatric patients.

For this retrospective case series, all pediatric patients were gathered who suffered a proximal Bado fracture between November 2000 and August 2019. Only patients who were treated by closed retrograde intramedullary nailing were included. Demographics, injury patterns, details of surgical treatment, and radiographs were obtained from medical records. Preoperative imaging consisted of conventional radiographs of the elbow and the forearm in two planes. Informed consent was obtained from the parents of the patients. The local ethical committee approved this study (CER-VD-2019-01816).

The surgical procedures were performed under general anesthesia. All patients were in a supine position with an arm-table. The whole upper extremity was disinfected and sterile draped. Administration of weight-adapted single-dose antibiotic prophylaxis of Cefuroxime was 30 minutes before surgery. The entry point in the distal third of the ulna was localized using fluoroscopy. The surgeon made a 10-20 mm long skin incision slightly distally of the ulna’s distal third’s desired bony entry point. After blunt dissection of the subcutaneous tissue, avoiding the superficial ulnar nerve or basilica vein, the periosteum was sharply incised, and the ulnar cortex perforated obliquely using a 2.5 mm drill bit or an awl.

An appropriate size of IMN (one-third of the intramedullary canal) - alternately a Kirschner-wire (K-wire) (Figure 17 and 18) – was chosen and slightly bent (Figure 1) to allow exerting corrective forces at the fracture site and thus, indirectly reduce the ulnar fracture and relocate the radial head correctly. The nail was manually introduced under fluoroscopic control just to the level of the ulnar fracture. Then, depending on the specific fracture displacement, a manual force was exerted at the level of the ulnar fracture, the nail ultimately brought into contact with the dens cancellous bone of the ulnar metaphysis, and by turning the nail, definitive reduction and simultaneous fixation accomplished. The surgeon achieved reduction and fixation accordingly to the Bado classification, as explained below. After the fixation, the correct anatomical reduction of the ulna and the radial head’s central position was checked using fluoroscopy in the two planes with the forearm in pronation and supination. Then, the IMN was bent and shortened distally, the skin sutured, and the arm immobilized with a plaster cast for four weeks. Clinical and radiographic controls were at week four, eight, and ten after surgery. Removal of the IMN was done after radiological healing.

2.2 Bending of the intramedullary nail

2.2.1 Bado I: It is defined as an ulnar fracture displacement in extension with ventral dislocation of the radial head.

2.2.2 Bado II: It is defined as an ulnar fracture displacement in flexion with dorsal subluxation of the radial head

2.2.3 Bado III: It is defined as an ulnar fracture displacement and impaction in varus with lateral dislocation of the radial head 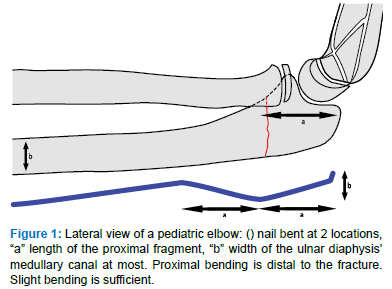 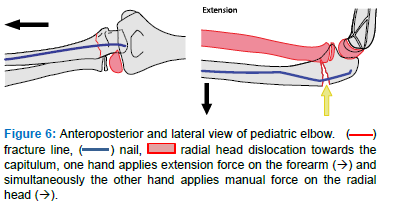 This case series reports about six pediatric cases (age two to six years, two girls and four boys). Table 1 shows the epidemiologic and treatment details. All suffered a proximal Bado fracture [2]. Three presented a type I and three a type III lesion. In 5 cases an IMN and in 1 case a K-Wire was used. Surgical technique was according the above mentioned instruction. In five cases, closed indirect reduction of the ulnar fracture and reposition of the radial head was achieved. One case needed revision surgery.

Surgery was done within twenty-four hours after admission. Mean operation time was 50 minutes (range, 40 to 62). Implant removal was performed at 10 to 20 weeks after the initial procedure. Recorded operation time for removal of the implant was 17 minutes (range, 6 to 36). At the last follow-up, all children were pain-free and regained full mobility of the elbow joint for flexion and extension and pro- and supination compared to the contralateral side. Mean follow-up was 14 months (range, 12 to 16). All fractures united in correct alignment and presented no limitation of range of motion compared to contralateral side. No infection, vascular or nerve injuries, or other complications occurred. Revision surgery was necessary in one case due to wrong positioning of an unbent nail, insufficient fracture reduction and persistent subluxation of the radial head. The osteosynthesis material was removed and a reduction and retention of the fracture was achieved by retrograde nailing according to the above description (Figure 19-22). The follow up was uneventful.

Six-year-old boy after falling with a direct impact on his left upper extremity: local pain without vascular or nervous deficiency (Figure 11-16). 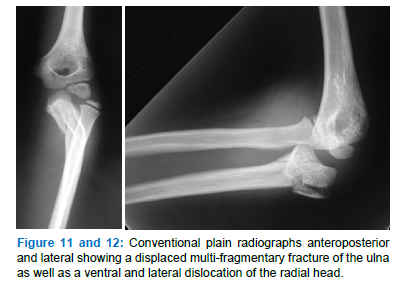 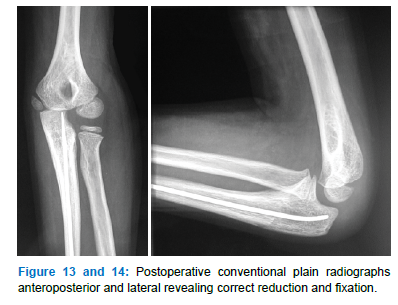 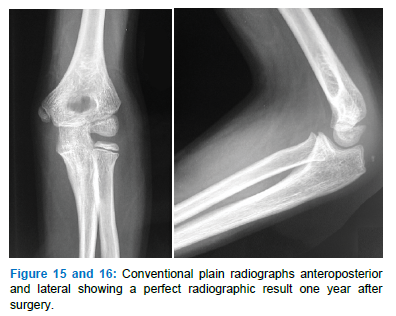 This small retrospective case series presents the results of a modified retrograde IMN technique for the treatment of Bado Type I-III [2] with proximal ulna fracture in pediatric patients. The presented technique is simple and allows to obtain a successful treatment of these fractures. Bado type lesions of the forearm are rare injuries [12]. To reduce the dislocated radial head properly, anatomic reduction and retention of the ulnar fracture are mandatory [13]. Closed reduction can be difficult in case of severe impaction or soft tissue interposition. Residual malalignment or/and radial head subluxation should not be tolerated [13, 14]. If malalignment of the radiocapitellar joint is suspected, operative treatment is advised. If interposition of soft tissue is suspected, an open reduction should be considered [15]. Improper bending or positioning of the IMN can also lead to persistent subluxation of the radial head and will need revision surgery.

Other possible surgical procedures have essential drawbacks. Percutaneous pinning or stacked nailing [9] implicates postoperative wound treatment and, therefore, repetitive opening or removal of the cast. Antegrade nailing with the introduction of a nail through the olecranon apophysis may create later growth disturbances. Yuan et al. [14] showed better results using closed reduction and intramedullary nailing than external fixation in terms of residual pain and clinical appearance. A safe but invasive surgical technique is an open reduction and internal fixation by plating [7, 8]. Nevertheless, to respect bone and soft tissue vascularity and vitality, a closed indirect reduction technique and stabilization of the ulnar fracture through the intramedullary implant is preferable. We think that open reduction and internal fixation using plating as a primary treatment option is reserved for specific cases, e.g., in highly comminuted fracture patterns, due to the invasive type of procedure [14]. Literature lack showing if nailing is superior to plating. Immobilization after internal fixation is not necessary. However, postoperative pain is better tolerated by our patients than without. Therefore, we use an open removable cast with an antalgic purpose for a short duration. Because the ulnar fracture is localized in the forearm’s proximal third, a retrograde nailing technique should be used according to the known Küntscher’s [16] principle.

Our study presents six cases treated with this technique. In one case, secondary displacement occurred due to insufficient surgery. Using the described method, we did the revision surgery successfully. Later healing was uneventful. As illustrated in case 1, it appears bending has not been applied as proposed. It’s debatable if bending in narrow intramedullary canal is necessary. However, reduction and retention were achieved by rotating the elastic nail tip as described and remains a key element. Nevertheless, if the IMN cannot bridge the fracture, bending can help guiding the nail properly. There are several limitations to this study. For this small retrospective case series no control group exists. The outcome was, therefore, dependant on the radiographic and surgeon-reported outcomes. A surgical technique for Bado type II has been described, but at this moment lack of evidence. Further studies need to be done comparing this procedure to other treatment methods with a more significant case number. 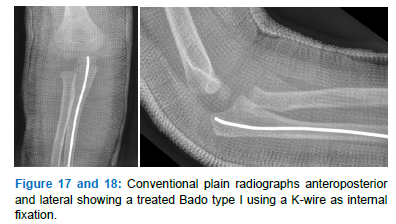 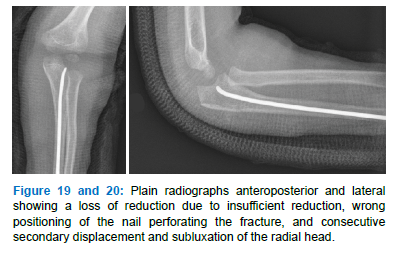 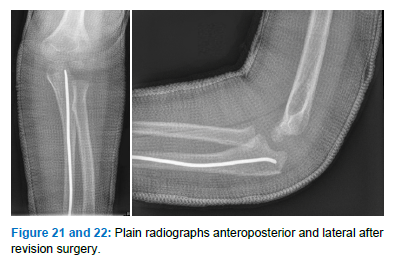 A reduction and internal fixation algorithm is illustrated using an elastic nail to treat  Bado Type I-III with proximal ulna fracture in pediatric patients. Indirect reduction and intramedullary retrograde nailing are minimally invasive techniques that do not harm the blood supply to the bone and soft tissues. It may be a safe and effective procedure for these kinds of fractures.

Each author certifies that his institution has approved the reporting of this case series, that all investigations were conducted in accordance with the Declaration of Helsinki and Guidelines for Good Clinical Practice. The study was approved by the Ethics Cantonal Committee (CER-VD-2019-01816).

Authors do not wish to share their data as it was not stated in the ethics approval.

The authors received no financial support for the research, authorship, and/or publication of this article.

Many thanks to Marc Lottenbach, M.D., for his support and help.