Heart tumors are rare in children, most of them are benign but some can cause serious complications such as compression of the coronary arteries, obstruction, arrhythmias, valvular insufficiency and thromboembolism. The aim of this paper is to report the case of an infant with a giant cardiac hemangioma successfully treated with propranolol without significant side effects. Propranolol treatment of cardiac hemangiomas may be the initial treatment and avoid the need for surgical treatment.

Cardiac tumors are rare in the pediatric age group with a reported incidence of 0.03-0.32%. Although the majority are benign, they could cause serious complications such as coronary artery compression, cardiac chamber obstruction, valvular malfunction, thromboembolism and arrhythmias [1, 2]. Cardiac hemangiomas account for 2-4% of all cardiac tumors. Infantile hemangioma (IH) is the most frequent vascular tumor in children. Most of them involute spontaneously in the first years of life with only 10-15% requiring treatment. Beta blocking drugs, particularly propranolol, have been successfully used in the treatment of pediatric hemangiomas in different locations such as skin, larynx and liver [3, 4]. We report the case of an infant with a giant cardiac hemangioma successfully treated with propranolol.

An asymptomatic one moth old male infant was referred to cardiology for evaluation of a heart murmur. Physical examination was remarkable for a regular rate and rhythm with a normal S1 and S2 and a 4/6 left parasternal systolic ejection murmur. ECG showed sinus rhythm with an incomplete right bundle branch block pattern. Echocardiography showed two small (2 mm each) apical muscular ventricular septal defects with left to right shunt. Ventricular size and systolic function were normal. Valvular function was normal. Pericardial effusion was not observed. A 17 × 11 mm mass was seen in the roof of the right atrium. Its borders were well defined but it was heterogeneous inside with a vascularized appearance and positive flow signals by spectral and color Doppler. The diagnosis of cardiac hemangioma was made and later confirmed by cardiac resonance. Rapid tumor growth was observed on follow up 2 months later. At the age of 3 months the tumor measured 33 × 16 mm occupying most of the right atrium and protruding into the right ventricle across the tricuspid valve in diastole (Figures 1 and 2). There was no obstruction to the systemic venous flow. 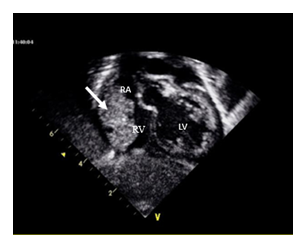 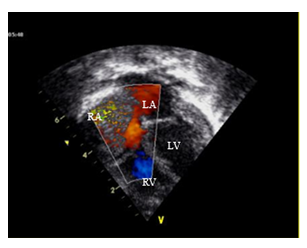 Because of the observed rapid tumor growth and based on reports about the successful use of beta blocking drugs in the treatment of infantile hemangiomas in other organs, the patient was started on propranolol, which was gradually increased to a dose of 3 mg/kg/day. The patient was followed closely clinically and with echocardiography to assess the response to therapy and potential need for intervention. Positive changes were seen early after the initiation of propranolol, starting on the third week of therapy, with growth arrest followed by a gradual decrease in size and Doppler flow. Complete resolution of the hemangioma was observed at 10 months of therapy. Echocardiography confirmed spontaneous closure of the ventricular septal defects. Propranolol was well tolerated without reported side effects. Follow up at 4 years showed normal cardiac anatomy and function by ultrasonography without evidence of residual or recurrent tumor.

Cardiac hemangiomas have been reported at any age and gender. They are more frequently localized in the right heart, particularly in the right atrium in 26.2% of cases, and they could involve the endocardium, myocardium and pericardium. Histologically, a benign proliferation of endothelial cells forming vascular channels is seen which is similar to hemangiomas in other organs. They are classified as cavernous, capillary and arteriovenous types according to the predominant blood vessel type but most have mixed histology. Echocardiography shows a mass with clear borders, vascularized with vessels and lacunae and blood flow demonstrated by Doppler. Cardiac resonance is equally diagnostic adding information about size and extracardiac extension. A review by Li [5] of 200 reported cases with cardiac hemangioma noted severe events in 20.6% of cases including syncope, angina and cerebrovascular accidents. The review also suggested that although surgical therapy is controversial, it should be indicated in symptomatic patients or when the hemangioma is localized in the interventricular septum, both associated with higher mortality. Conservative therapy is preferred in asymptomatic patients and this include the use of endothelial growth factor antagonists, beta blocking drugs, steroids and radiotherapy. However, there are no large series or randomized trials supporting these options.

The beneficial effect of propranolol in infantile hemangiomas was discovered by accident when a child with a facial hemangioma receiving propranolol for hypertrophic cardiomyopathy showed regression of his vascular skin lesion. Clinical series and randomized studies followed this initial observation and Guidelines for the management and use of beta blocking agents for infantile hemangiomas have been published [6], propranolol is well tolerated and side effects such as bradycardia, hypotension, hypoglycemia, bronchospasm, somnolence and sleep disorders are infrequent. Successful treatment rates for cutaneous hemangiomas are as high as 85-90%, but the effectiveness in cardiac hemangiomas is unknown [7].

This is a case report about the successful treatment with propranolol of a giant cardiac hemangioma in an infant. In the absence of an acute hemangioma related cardiac complication, propranolol should be considered as the initial therapeutic option in similar cases.

The authors do not declare any conflict of interest or financial support.