Background: Von Hippel-Lindau (VHL) syndrome represents a rare familial condition caused by germline mutations of the tumorsuppressor gene VHL, which is located on the short arm of chromosome 3p25. Only 20% of the cases arise from de novo mutations, most patients having a positive family history with an autosomal dominant transmission. VHL is characterized by the presence of vascular tumors including hemangioblastomas of the cerebellum, spinal cord, brain stem and retina and the appearance of multiple cysts in different organs. Frequently, patients can associate clear cell renal carcinoma (RCC) and pheochromocytomas, or endolymphatic sac tumors.

Conclusions: Patients with rare tumors characteristic of VHL (e.g. retinal or cerebellar hemangioblastomas) should be evaluated clinically and molecularly for VHL. This includes reviewing a detailed family history focused on characteristic tumors.

Von Hippel-Lindau disease is an autosomal dominant syndrome which is associated with a variety of tumors. The VHL gene coding sequence contains three exons, two isoforms of mRNA exist, reflecting the presence or absence of exon 2. Tumors appear following the loss or inactivation of the wild-type allele in a cell. Data shows that 20% of patients have germline mutations detected by Southern blot analysis, 27% missense mutations and 27% nonsense or frameshift mutations [1, 2]. Clinical heterogeneity is a hallmark of VHL, with four phenotypes that exhibit widely differing frequencies of pheochromocytoma and renal cancer [3, 4]. The VHL gene is a tumor suppressor gene that encodes two different proteins (pVHL) of 213 and 160 amino acids, respectively. Both gene products have a role in the degradation of the hypoxia-inducible factors (HIF-1α and HIF-2α): the pVHL proteins have the α domain that binds with the protein elongin, and the β domain of pVHL is open to bind HIF that has been hydroxylated. The complex binds ubiquitin that targets HIF for intracellular destruction by proteases and well oxygenated cells destroy HIF. In this way, cells are oxygen-deprived. Also, lack of functional pVHL can cause accumulation of HIF (that is a transcription factor that induces the production of VEGF- vascular endoth-elial growth factor, erythropoietin, erythropoietin receptor, glucose transporter-1 and platelet-derived growth factor-B that allow adaptation to hypoxia, but in excess probably enhance tumorigenesis).

Estimates of VHL prevalence and incidence vary widely. Prevalence is estimated at 1/53.000 and annual birth incidence at 1/36.000. Men and women are equally affected [3]. Mean age of onset (the age of first sign or symptom) is 25, 25 years old with a mean age at diagnosis of 30, 87 years. The most common appearance is represented by cerebellar hemangio-blastoma (34,9%) and the most common cause of death are the complications of cerebellar hemangioblastomas (47,7%). The life expectancy is under 50 years with a mean age at death of 40, 9 years [1, 2]. Signs and symptoms in patients with cerebellar hemangio-blastomas can include: headache, nystagmus, positional vertigo, hypertension, slurred speech, vomiting, wide-based gait and dysmetria. Data from the literature show that the cerebellar lesions are the most frequent tumors (44-72%) and the mean age of the appearance is 30 years old (age range 11-78), followed by renal cell carcinoma (40-70 %) with a mean onset age of 37 years old (age range 16-67) [5].

Studies on genotype–phenotype correlations confirmed that pheochromocytoma is linked to VHL missense mutations. The age at onset for VHL syndrome is significantly earlier and the age-related risks of RA and RCC are higher for individuals with nonsense or frameshift mutations compared to those with deletions. Importantly, the results of these studies provided valuable strategies for genetic counseling and clinical prophylactic surveillance for VHL family members [13]. In VHL, pheochromocytomas exclusively produce norepinephrine. Plasma free normetanephrine levels are usually elevated. When an abdominal CT scan shows a solid renal lesion, this must be surgically removed, because even simple cystic renal lesions are considered premalignant. If renal cysts are observed, they must be followed with dynamic thin-section CT scan every 6 months.

A suggested lifetime surveillance protocol for patients with VHL2 germline mutations is proposed: patient must self-monitor blood pressure, and report hypertension or any suspicious symptoms; age 10-15 years is recommended for yearly retinal examination, blood pressure measurement and plasma free normetanephrines level; after the age of 15, it is recommended a twice yearly physical examination with blood pressure measurements and plasma free normetanephrines; every two years MRI scanning (with intravenous contrast) of the brain and spinal cord and abdomen; for abnormal biochemical screening, MRI or CT scan of the abdomen with thin-sections adrenal cuts, and 123I-MIBG SPECT or 18F-FDA PET scan to confirm the identity of the small masses.

A 40 years old woman, non-smoker, with positive family history for VHL (her father and one sister were diagnosed with VHL) presented at the age of 18 years old with blurred vision, headache and unilateral visual loss (left eye). After the ophthalmological exam, the diagnosis of left eye retinal angiomatosis was established. The patient underwent multiple laser argon photocoagulation interventions and cryotherapy with poor outcome and with the development of proliferative retinopathy at the age of 23 years old. She developed glaucoma and cataract, with crystalline replacement. Also, she presented a hemangioblastoma which affected the right optic nerve. The cerebral MRI exam showed a right cerebellar hemangioblastoma (of the brainstem) (Figure 1). The patient underwent neurosurgical resection (posterior fossa craniotomy – total laminectomy of the first cervical vertebra and partial laminectomy of the second cervical vertrebra). The histopathological exam established the diagnosis – cerebellar hemangioblastoma (grade I WHO) and the genetic and molecular testing confirmed the presence of the germline heterozygote mutation VHL c.500G>A; p.Arg167Gln (at 32 years old). Further follow-up and MRI exams revealed the presence of spinal hemangioblastomas, (T12-L2) (Figure 2). Also, she had  multiple cerebellar hemangioblastoma and one affecting the right optic nerve.

Considering the slightly elevated value of the plasmatic normetanephrines, the presence of the bilateral adrenal masses and the presence of the heterozygote mutation VHL c.500G>A; p.Arg167Gln, the patient was referred to surgical intervention, and underwent minim-invasive partial bilateral adrenalectomy with tumor enucleation via retroperitoneal approach (histopathological exam confirmed bilateral pheochromocytoma). Postoperative evolution was favorable, with preserved adrenal function. Due to ocular complications related to the right optic nerve hemangioblastoma, the patient had another intervention with intradural and extradural decompression of the optic canal and tumor biopsy (34 years old).

The histopathological exam confirmed the nature of the tumor – optic nerve hemangioblastoma with optic canal extension (WHO grade I). Unfortunately, after one year, a surgical reintervention was needed for a complete microsurgical removal of the hemangioblastoma. Further, cerebral MRI follow-up showed the progression of a right cerebellar hemangioblastoma (25/24/20 mm) which was completely surgically resected (2019) with a good outcome. The most recent (41 years old) ophthalmologic exam showed a narrowing of the right visual field, loss of the left visual field with left eye ocular motility disorder (divergence) with pigmentary sequel lesions (right eye fundus) and undetectable left eye fundus. 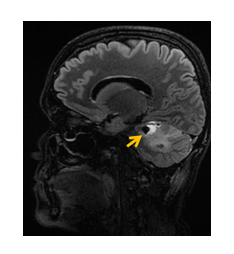 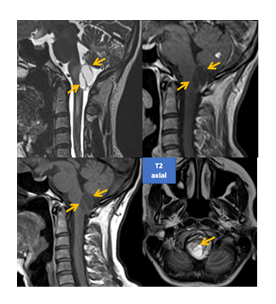 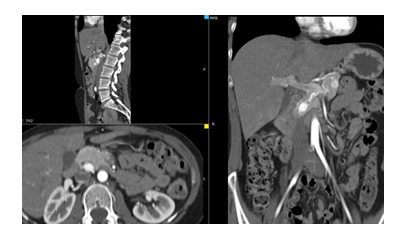 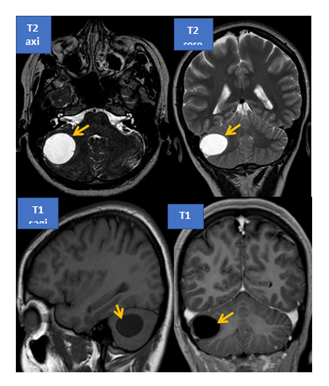 The first patient was confirmed with VHLc.500 G>A (p.Arg167Gln), which was associated in studies with VHL type 2, and preferentially induces pheochro-mocytoma and retinal, cerebellar and spinal cord hemangioblastomas [14]. The frequency of pheochromocytomas and paragangliomas in patients with VHL has been estimated between 10% and 25% [15]. In most of the patients with this missense mutation, the pheochromocytomas were non-functional, as in our patient. Other data from genetic studies showed that p.Arg167Gln is associated with RCC and renal cysts in western populations (VHL type 1), but in Chinese populations it was associated with pheochromocytoma and VHL type 2 [14]. Missense mutations in codon 167, like p.Arg167Gln occur in all ethnic groups, and were also observed in Korean population [16]. Codon 167 was strongly associated with the development of pheochromocytoma, also missense mutations are more frequently associated with the development of pheochromocytoma, compared with other mutations [17]. Mutations in this codon have been found in approximately 43% of the American and Canadian families with VHL type 2 [17, 18, 19]. Genotype-phenotype correlations should indicate the best way of surveillance, as stated in the literature, pheochromocytoma screening should start in VHL families and children with missense mutations, before 5 years old [17]. The second patient presented at 26 years old with a right ovarian cyst and at 37 years old with right retinal hemangioblastoma and right cerebellar hemangioblastoma. She underwent multiple ophthalmologic interventions with poor outcome (vision loss of the right eye). Retinal hemangioblastomas are generally located in the peripheral temporal retina, but may rarely occur in the posterior pole and on the optic disc. Lesions are usually bilateral and multiple. The differential diagnosis should include Coat’s disease, retinal cavernous hemangioma, retinal macroaneurysm, and vaso-proliferative tumors [20]. In the retina, hemangioblastomas are slow-growing, benign tumors. Without treatment, however, they can cause complications such as macular edema, exudative and tractional retinal detachment, intravitreal hemorrhage, and neovascular glaucoma. There is no standard treatment approach to retinal hemangioblastomas. The treatment method varies depending on the location, size and related complications. Treatment options include laser photocoagulation, cryotherapy, photodynamic therapy, transpupillary thermotherapy, plaque radiotherapy, external beam radiotherapy, and vitreoretinal surgical ablation [20]. Intravitreal anti-vascular endothelial growth factor inhibitors have recently come into use for reducing exudation resulting from hemangioblastoma. Active surveillance is recommended. The likelihood of favorable outcome is lower with tumors located on or around the optic disc [20]. Both of the patients presented with ocular manifestations, and some data show that in half of the cases of VHL, ocular manifestations revealed the disease, and visual morbidity is associated with the retinal hemangioblastomas count, and with no other ocular or general characteristics and can be related with the type of germline mutation, but further genetic and clinical studies on large series are needed [21].

Clinical hallmarks of VHL syndrome are retinal and central nervous system hemangioblastomas, pheochromocytomas and a high risk of malignant transformation of the renal cysts in RCC.  The wide variation of the clinical presentation, the positive diagnosis should be considered when a patient has more than one hemangioblastoma (brain, spinal cord, eye); a single hemangioblastoma (central nervous system, retina) plus a visceral manifestation (multiple renal, pancreatic, hepatic cysts, pheochromocytoma, renal cancer); positive family history plus any clinical manifestation stated; a positive mutation in the VHL gene. Hemorrhages associated with renal cancer and cerebral hemangioblastomas are the leading causes of mortality in these patients at young ages, systemic evaluation and monitoring is crucial. Routine follow-up is mandatory. The patients must avoid tobacco products, as well as chemical and industrial toxins and must avoid contact sports due to their renal and pancreatic lesions. The prognosis of the patients diagnosed with VHL depend on the number, location and complications of the tumors. Untreated, VHL may cause blindness and permanent brain damage. Early detection, genetic screening and treatment may significantly improve the prognosis. Multidisciplinary approach – ophthalmology, neurology, neurosurgery, endocrinology evaluations are necessary.

This manuscript is a report of two cases. All procedures performed in this case reports were in accordance with the ethical standards of the institutional research committee and the 1954 Helsinki Declaration and its later amendments or comparable ethical standards.

Consent to publish: The authors affirm that the participants provided informed consent regarding publishing their data and the images in Figures 1, 2, 3, 4, 5. The participants have consented to the submission of the case report to the journal. Additional informed consent was obtained from all individual participants for whom identifying information is included in this article.

The authors declare no source of funding  for this manuscript.