Walker-Warburg Syndrome: A Case report of Congenital Muscular Dystrophy with Cerebro-Ocular Malformation, a Rare Syndrome in an African Patient

Walker-Warburg Syndrome is a genetically heterogeneous disease with autosomal recessive inheritance presenting with congenital muscular dystrophy with cerebro-ocular malformations since birth or infancy. Literature shows a mutation in Protein O-Mannosyltransferase 1 (POMT1) gene, which results in a defect in O-mannosylation of α-dystroglycan, these proteins are central to the pathogenesis of structural and functional brain abnormalities however, the exact pathophysiology of this disorder is not fully understood. The overall incidence still remains unknown and most cases have been reported from the Western hemisphere. In our setting we report a case of 3 weeks old male baby who was delivered by spontaneous vertex delivery at gestation age of 26 weeks with birth weight of 1900 gm referred to our hospital on the 6th day of life, with complaint of bilateral prominent, protruding eyes and inability to close the eyelids. The parents were non-consanguineous and this was the first child. No ante- natal ultrasound was done during the pregnancy. On further examination, he had macrocephaly 33 cm (>97th centile) with no fusion of the sutures, depressed nasal bridge, low set ears, bilateral dental lamina cyst, bilateral cortical thumb, micrognathia, and scoliosis. Systemic examination revealed a normal conscious level with weak cry, normal facial symmetry, generalized hypotonia and primitive reflex were weak to absent and ocular examination revealed bupthalmos, bilateral megalocornea and glaucoma. Creatine kinase was elevated-522 unit/L (0-25 units/L). Cranial Ultrasound revealed Dandy-Walker cyst in the posterior fossa cyst, with third ventricle dilatation (ventriculomegally), the corpus callosum was normal, Interventricular hemorrhage grade 2 and hyper echogenic eyeballs. Echocardiography revealed Double Outlet Right Ventricle. Management was supportive, aimed to improve growth through optimum feeding, eye padding for protection and diuretics for the underlying congenital heart disease.

Conclusion: Overall prognosis of this disease is poor, the baby died in 42 days due to aspiration pneumonia and progressive respiratory failure. Genetic counselling was done to the parents, since in families with one affected child, the risk of having another child with the disease is 25%. A high index of suspicion during a routine antenatal ultrasound could prompt further advanced fetal ultrasonography and magnetic resonance imaging, and aid in timely prenatal diagnosis, management, and counseling.

We report a case of 3 weeks old male baby who was delivered by spontaneous vertex delivery to primipara at the gestation age of 26 weeks, at Moro Hospital in Rufiji with a birth weight of 1900 gms. After birth, it was noted that there was bilateral prominent, protruding eyes and inability to close the eyelids. On the 6th day of life the baby was referred to the Muhimbili National Hospital. There was no reported history of seizures, eye discharge or fevers. The parents were not consanguineous and the mother had 4 miscarriages before this pregnancy, which were in early trimester. She made four antenatal care visits received anti-malarial, hematinic and tetanus vaccination, HIV status and syphilis status was negative, however, she had a urinary tract infection one week prior to delivery that was treated. No ante-natal ultrasound was done throughout the pregnancy. On general examination, we found macrocephaly 33 cm (>97th centile) but no fusion of the sutures, depressed nasal bridge, low set ears, bilateral dental lamina cyst, bilateral cortical thumb, micrognathia, and scoliosis. Neurologic examination revealed normal conscious level, weak cry, baby normal facial symmetry, no tongue deviation or fasciculations, cranial nerves II, III, IV, VI, IX, XI were difficult to assess. Baby had generalized hypotonia and primitive reflexes were weak to absent. Ocular examination revealed bupthalmos, bilateral megalocornea and glaucoma. 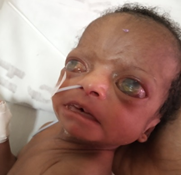 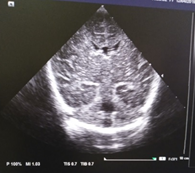 Management was supportive. During the course of hospitalization the baby was treated with Ciprofloxacin eye drops for exposure keratitis, eye padding and diuretics (syrup furosemide 2 mg once daily) for the underlying heart condition, antibiotics for pneumonia and expressed breast feeding. After one month the baby had gained 200 gms and weighed 2100 gm. On the 30th day of life baby aspirated milk contents while feeding and developed aspiration pneumonia and was kept on Continuous positive airway pressure (CPAP). Unfortunately, the baby died on the 42nd day of life due to respiratory failure. The overall prognosis was poor due to multisystemic congenital abnormalities. Mother was counselled from the beginning and she was cooperative throughout the course of illness. Genetic counseling was done to the mother. She was also counselled to plan the next pregnancy and ensure that ante- natal ultrasound should be done earlier in the pregnancy as brain abnormalities has been detected as early as 13 weeks. Dandy Walker cysts in the posterior fossa, venticulomegally, macrocephaly, generalized hypotonia, eye abnormalities and raised CK and the cranial USS characteristics described above alerts to the possibility of WWS.

WWS is a rare syndrome and has a spectrum of various eye, brain and muscle abnormalities. It carries a poor prognosis. Eye malformations include microphthalmia, coloboma, glaucoma, cataract, megalocornea, persistent hyperplastic primary vitreous and retinal dysplasia or detachment. The ophthalmological features were no less variable and the abnormalities of the anterior segment seem to be as frequent, in our case being megalocornea and congenital glaucoma that could be suggestive of retinal detachment and are mentioned in all the reports. CNS malformations include absent laminar structure agyria/pachygyria, ventriculomegaly, cerebellar dysplasia, encephalocele, Dandy-Walker cyst, hydrocephalus [4-7]. Despite of many cases of congenital muscular dystrophies in African countries, there is no report of WWS. Most cases are reported in the literature are from the Western hemisphere. Laboratory investigations usually show elevated creatine kinase, myopathic/dystrophic muscle pathology and altered α-dystroglycan.

Familial recurrence of this syndrome has been reported in consanguineous parents, which strongly suggests autosomal recessive inheritance, [8] In our case the parents were non consanguinoues and various cases have also been reported in this population [9-10]. Agarwal, et al. [11] reported a similar case with dandy walker cysts in the posterior horn and eye abnormalities such as micropthalmos and megalopthamos in the same patient. Pagon R, et al. [6] has also reported case of 2 siblings with eye and brain abnormality where one had a progressive hydrocephalus and central corneal opacities also known as Peters anomaly and a 2 cm skin covered encephalocele, hydrocephalus and micropthalmia of the right eye and megalocornea of the left eye and retinal detachment in the other one. The infants, however, died at one year of age, with increasing spasticity. Heyer R, et al. [12], Pavone L, et al. [9] have also described congenital muscular dystrophy characterized by muscular weakness, hypotonia and joint contractures to be associated with eye and cerebral malformations in Walker Warburg syndrome. In addition to the congenital malformations, elevated Creatinine Kinase values were reported in all of the above cases and this was also observed in our baby.

Management is usually supportive and preventive. Genetic counselling should be done as it is an autosomal recessive disorder and in families with one affected child, the risk of having another child with the disease is 25%. Increased awareness of this rare but lethal condition, and a high index of suspicion during a routine antenatal ultrasound could prompt further advanced fetal ultrasonography and magnetic resonance imaging, and aid in timely prenatal diagnosis, management, and counseling.