Ketamine in a Patient with Comorbid Anorexia and MDD

Citation: Esther Dechant, Brian Boyle, Rachel A Ross. Ketamine in a Patient with Comorbid Anorexia and MDD. Journal of Women’s Health and Development 3 (2020): 373-375.

MDD (Major Depressive Disorder) is common in patients with Anorexia Nervosa (AN); an estimated 39.1% to 49.5% of patients with AN have a lifetime comorbid MDD. However, standardized mortality ratio for AN is higher than any other psychiatric illness, and suicide is the second leading cause of death [1]. Depression is complicated in patients with AN due to the deleterious impact of AN on social, academic, psychological and emotional functioning. Furthermore, the physical effects of malnutrition mimic or exacerbate depression. In addition, patients with AN often have trauma, SUD, anxiety disorders, and psychosocial stresses that complicate their cases and worsen their moods [2, 3]. Because of these common co-morbidities, treating AN goes beyond weight restoration and re-establishing regular eating, and maintenance of recovery requires treatment of the psychological symptoms of AN and comorbid conditions that persist after weight restoration. Multiple randomized controlled trials have established that ketamine can quickly and effectively treat MDD and suicidality in adults, but none have looked at its use in patients with co-morbid eating disorders [4].

Here we present a case of a 29 year old patient with a history of AN since adolescence, with co-morbid MDD, with borderline and narcissistic personality features, and high risk for suicide, who showed initial but not sustained improvement in response to treatment with ketamine. The patient’s eating disorder began in adolescence in the setting family stress and loss. Initially she restricted intake and lost weight rapidly due to excessive physical activity. These symptoms worsened further in the setting of an emotionally abusive relationship in young adulthood. She reported symptoms of self-hatred and feelings of worthlessness, though she declined symptoms of PTSD. She acknowledged food restriction as a method of self-soothing. The patient was hospitalized three times for AN within the two years prior to this presentation, each time with improved symptoms and weight restoration, but with minimal time to relapse after discharge. She was diagnosed with MDD and was hospitalized for a fourth time after a suicide attempt.  She had multiple full medication trials with SSRIs, atypical antidepressants, augmentation with second generation antipsychotics, and full dose lithium + lamotrigine with minimal effect on mood. She received bilateral ECT which was helpful while hospitalized, but not on maintenance. She presented to Klarman Eating Disorders Center at McLean Hospital in the summer of 2019 after an initial course of ketamine, through which her depression and SI persisted, as did her disordered eating behavior.

The patient’s BMI on admission was 16.9 (47.5kg), so we postponed ketamine treatment in favor of improving malnutrition. All laboratory values (BMP, CBC, thyroid hormone, amylase, LFT) were normal. Residential treatment for three weeks focused on improving sleep, weight restoration, normalizing eating, stopping compulsive exercise, and intensive trauma informed therapy (individual, family, group, art) to target low self-esteem and coping.  Lithium at 600 mg was added to Abilify 5 mg, Cymbalta 60 mg, Trazodone 50 mg with no improvement in mood or suicidality. Lamictal 400mg daily was discontinued. Upon reaching a BMI of 18.3 (54.3kg), the patient began ketamine treatment. She received nine treatments consisting of racemic ketamine IV dosed at 0.5mg/kg actual body weight, infused over 40 minutes. The first eight treatments occurred twice weekly; the ninth treatment occurred one full week following the eighth. The patient’s response was demonstrated by subjective report during clinical visit interviews, as well as scores on validated self-reported instruments that included the 16-item Quick Inventory of Depressive Symptomatology (QIDS) [5] and 24-item Behavior and Symptom Identification Scale (Basis-24) [6], all obtained on the day of treatment, prior to infusion. After treatment 3 (BW 54.1kg), the patient reported no active thoughts of suicidality, but continued to have passive ideation and wish to be dead.

After treatment 8 (BW 57.8kg), clinical report shows no active or passive thoughts of suicidality. The following week, there was an acute, significant external stressor, that led to a resurgence of suicidal thoughts requiring a step up from residential unit to inpatient level of care. Though this indicates a short-lived nature of the response to ketamine, the initial improvement was significant, and achieved more quickly than prior response with ECT alone. Figure 1 shows the improvement in symptoms over the course of ketamine treatment, with the most significant drop in scores occurring after three doses, concurrent with clinician notes indicating a change from active to passive suicidal thoughts. Based on this case, we suggest that ketamine can produce symptom improvement during continuous use, including decreased suicidality, in patients with comorbid AN and MDD, and we hypothesize that the treatment may be more effective after weight restoration, but it is unclear if the effect can be maintained any more than other anti-depressant treatments for patients with complex presentations of eating disorders and co-morbid MDD. 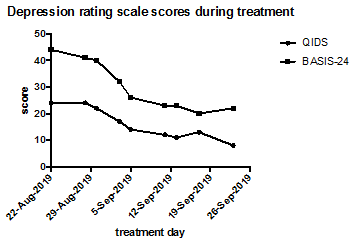 Figure 1: Depression rating scale scores for QIDS and BASIS-24 during treatment with ketamine. The patient received 9 doses of ketamine over the course of 5 weeks, and depression was seen to improve markedly during this time.