Cervical cancer (CC) is the fourth most common cancer among women worldwide. Early screening is helpful for the diagnosis and precision treatment of cervical cancer. Therefore, identification of CC related protein markers is required for cervical cancer diagnosis. In this study, we found the protein arginine N-methyltransferase 5 (PRMT5) was upregulated in CC patients compared with normal tissues through analysis of data from TCGA and GTEx datasets. Immunohistochemical staining and western blot confirmed that PRMT5 was indeed increased in the CC tissues. Furthermore, PRMT5 enhanced the ability of cell clone formation through activating AKT signaling pathway. Taken together, the higher expression of PRMT5 in the CC may be act as a prognostic biomarker, which involved in carcinogenesis by excessively activating AKT signaling pathway.

Cervical cancer is the fourth most common cancer among women worldwide. There are about 57,000 new cases and 311,000 deaths in 2018 [1]. The incidence and death rate has declined gradually in developed countries, due to cancer screening and HPV vaccination. However, in low-income and developing countries especially, cervical cancer remains the leading cause of death from cancer in women [2]. For example, in China, a significantly increasing incidence and mortality are observed which contribute 106,000 cases and 48,000 deaths to the global cervical cancer burden, especially many of whom are young women aged 15 to 44 years [3, 4]. It is worth noting that the incidence and death rate of cervical cancer is still increasing in developing countries in recent years due to the lack of effective prevention/screening methods [4]. Therefore, it is of great work to explore and develop more specific methods for early detection and prevention of cervical cancer. PRMT5 also named as Hsl7, Jbp1, Skb1, or Dart5 [5], serves as a protein methyl transferase that catalyzes methyl group on arginine residues in many proteins, which formed a Mono-Methylarginine (MMA), asymmetric (ADMA) and symmetric dimethylarginines (SDMA) [6]. PRMT5 controls gene expression by methylating histone/non-histone, which is implicated in a variety of cellular processes, such as cell proliferation and apoptosis [7], cancer metastasis [8], genes expression [9] and cell stemness [10]. Accumulating evidences indicated that dysregulation of PRMT5 was observed in multiple cancers via both epigenetic and non-epigenetic mechanisms. For instance, PRMT5 inhibits several miRNAs expression with its methylation modifications activity, which involved in tumor progression [11,12]. PRMT5 promoted the proliferation and metastasis of esophageal squamous cell carcinoma cells through LKB1/AMPK/mTOR signaling pathway [13]. In melanoma PRMT5 expression suppresses inflammation and antigen presentation cGAS/STING and NLRC5 pathways, indicating its inhibition could potentiate immunotherapy [14]. Although PRMT5 has been identified as a putative oncogene and its overexpression has been observed in several cancers [15,16]. However, the mechanism of PRMT5 in cervical cancer is still largely unexplored. In this study, bioinformatics analysis showed that PRMT5 was upregulated in CC tissues compared with the normal tissues. Moreover, immunohistochemical staining and western blot demonstrated that PRMT5 was indeed increased in the CC. Furthermore, we also found that PRMT5 promoted cell clone formation which involved in carcinogenesis by excessively activating AKT signaling pathway.

Human cervical cancer cell lines Hela and SiHa were purchased from ATCC. Both cell lines were cultured in the DMEM medium supplemented with 10% fetal bovine serum (FBS, Gibco) under 37°C with 5% CO2. For the plasmid transfection, cells were transfected with indicated plasmids with Lipofectamine 2000 according to the manufacturer’s instruction.

RNA-seq data and clinical data of The Cancer Genome Atlas (TCGA) and Genotype-Tissue Expression (GTEx) were downloaded from the UCSC Xena database (https://xenabrowser.net/datapages/), including 33 common cancer types and paired normal tissues. R software v4.0.3 was performed for statistical analysis. If not otherwise stated, the p <0.05 is considered statistically significant.

Cells were lysed with the RIPA lysis buffer plus PMSF for 30 min on ice. After centrifugation at 12,000 g for 15 min, the supernatants were boiled with loading buffer for 5 min. The equivalent protein samples were subjected into SDS-PAGE and then transferred to the PVDF membranes. The membranes were blocked with the slim milk for 1 h. After blocking, primary antibodies were added to incubated with membrane at 4? for overnight. Next, excess primary antibodies were washed by PBST and the signals were developed by the appropriate HRP-conjugated anti-mouse/rabbit secondary antibodies.

Cervical cancer tissues and normal cervical tissues were collected from Second Hospital, Anhui Medical University. All samples were verified by Institutional Ethics Committee. Tissue sections were deparaffinized and rehydrated with citrate buffer for antigen retrieval. Then all sections were blocked with 2.5% goat serum. Subsequently the sections were incubated with PRMT5 antibody at 4°C overnight and then immunoreaction with the biotinylated secondary antibody at room temperature for 1 h. Finally, signals were developed by DAB substrate kit and pictures were visualized under microscopy (Leica, LeicaDFC420C).

The scramble, shPRMT5-1# and shPRMT5-2# Hela and SiHa cells (3 × 103) respectively were seeded in the 6-well plates and replaced with the fresh medium every 2 days until the clones were noted (about 2 weeks). After being washed with PBS, the clones were fixed with 4% paraformaldehyde (PFA) for 15 min and stained with 1% crystal violet for 2 h at room temperature. After the staining, the plates were rinsed with distilled water and dried. The images of the plates were collected and clones were counted directly. shPRMT5-1#: CCGGCTGGGCTCATTTGCTGACAATCTCGAGATTGTCAGCAAATGAGCCCAGTTTTTG. shPRMT5-2#: CCGGGCGTTTCAAGAGGGAGTTCATCTCGAGATGAAC TCCTCTTGAAACGCTTTTTG.

To performed statistical analysis, GraphPad Prism 5.0 was used. Student t-test was applied to analysis the data. The data were presented as mean ± SD of two independently experiments in triplicate. The p<0.05 was set as the criterion for statistical significance.

3.1 The Expression Analysis of PRMT5 in Pan-Cancer

To explore the correlation between PRMT5 expression profile and cancers, we first evaluated PRMT5 expression in pan-cancer from TCGA and GTEx datasets. As shown in Figure 1, high-expression of PRMT5 was observed in the majority of 33 cancers compared with normal groups. Except PCPG, the expressions of PRMT5 were significant enhanced in all 26 cancers (p<0.001) and were just slight enhanced in the THYM and UCEC (p<0.05) (Figure 1A, B). Briefly, there was a strong correlation between the expression of PRMT5 and cancers, which indicated PRMT5 may play a critical role in the tumorigenesis. 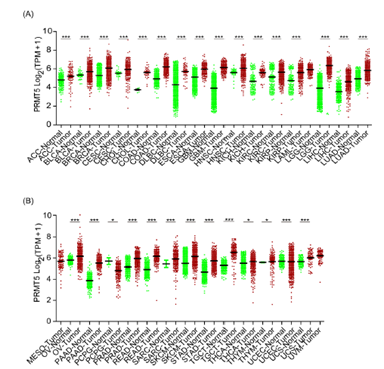 3.2 Survival Analysis for the Relationship between PRMT5 Expression and Prognosis in Patients

306 cases of cervical cancer samples and 22 paired adjacent normal cases from TCGA and GTEx database were analyzed to validate the predictive results. Among all of cervical cancer, 253 cases were CSCC and 53 cases were CSAC. Cervical squamous cell carcinoma (CSCC) and cervical adenosquamous carcinoma (CASC) are two main pathological types in advanced cervical cancer patients [17]. We also found that the PRMT5 expression increased in both CSCC and CASC (Figure 2A). Furthermore, to evaluate the role of PRMT5 in the prognosis of cervical cancer patients, Kaplan–Meier plotter database was used to analyze the overall survival (OS) and relapse free survival (RFS) between high-PRMT5 group and low-PRMT5 group. As shown in Figure 2B, patients with high-expressed PRMT5 have the worse OS (OS HR=2.03, p<0.001) and RFS (RFS HR= 8.66, p<0.001) than the low-expressed patients, suggesting the PRMT5 is a negative prognosis molecular in the cervical cancer. 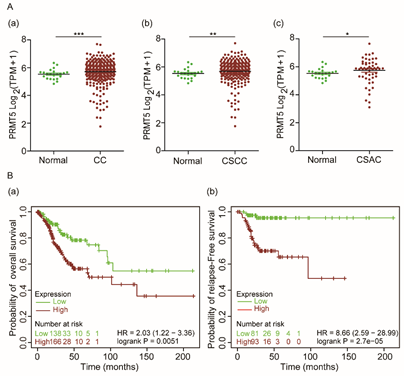 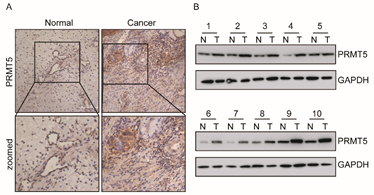 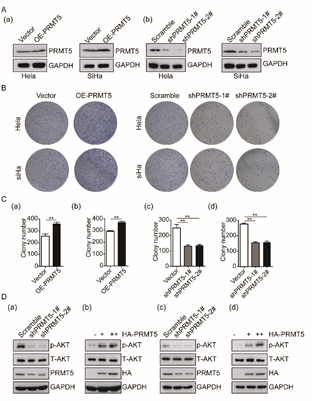 Despite the incidence of cervical cancer has been dropped since mid-2000s, but the diversity of cervical cancer pathopoiesia remains less known. Cervical cancer is highly preventable and can be treated if detected at early stages [19]. Unfortunately, over 50% of female never received cervical screening until diagnosed with cervical cancer [20]. Identification and demonstration of cervical cancer related clinical oncoprotein will be useful for the cervical cancer screening/prevention. As a oncoprotein, PRMT5 that participated in the regulation of cell proliferation, tumorigenesis, tumor invasion and metastasis has been elucidated in many human cancers [21]. For instance, PRMT5 recruits WDR5, one member of MLL-complex, on the promoter of genes, which leading to generation and metastasis of breast cancer stem cells [22]. A recent study reported that PRMT5 disruption drives antitumor immunity in cervical cancer by reprogramming T cell-mediated response and regulating PD-L1 expression [23]. In this study, we found that PRMT5 expression was increased in the cervical cancer based on the RNA-expression profile in TCGA and GTEx database. Patients with high expression of PRMT5 are always associated with poor prognosis. Furthermore, we also demonstrated that PRMT5 was significantly overexpressed in the cervical cancer tissues via IHC and western blot assays. Above data shown that PRMT5 may acts as a oncoprotein in cervical cancer development. As a serine/threonine kinase, Akt is central component in the PI3K signaling pathway. Aberrant PI3K/Akt signaling pathway activity is frequently observed in many kinds of cancers [24]. Akt was activated by a wide range of growth signals and the biochemical mechanisms modulates numerous processes involved in cellular survival, proliferation, migration, metabolism, and angiogenesis via the downstream proteins [25]. For example, Lysosome activates AKT inducing cancer and metastasis [26]. A study in bladder urothelial cancer has shown that the suppression of PRMT5 significantly downregulated expression of PI3K and deactivated AKT [27]. Recently, it was reported that PRMT5 enhance the growth of human lung cancer cells through co-locates with Akt and modulates Akt activation [28]. In our study, we proved that PRMT5 facilitated cervical cancer cells colon formation and AKT phosphorylation. More importantly, our results also uncover that PRMT5 promotes cell survival in cervical cells via Akt activation. This study points to a clear relationship between PRMT5 and AKT activation in generation of cervical cancer, and further suggest that use of PRMT5 inhibitors may be potential to prevent cervical cancer progression.

All authors have completed the ICMJE uniform disclosure form. The authors have no conflicts of interest to declare.

Enlin Wang performed the bioinformatics analysis. Xiaofeng Ma designed research and performed the experiments. Lei Zhan and Shiying Sun wrote the manuscript. Yurong Song and Qingyuan Wang collected the samples used for IHC. Bing Wei help us with language polish. All authors have read and agreed to the published version of the manuscript.

This study was supported by the Science Foundation of Anhui medical University (grant no. 2020xkj027).