Antibiotics as a Means of Secondary Prevention of Coronary Artery Disease: A Systematic Review

Background: According to the World Health Organization, 15.5 million individuals have coronary artery disease (CAD) worldwide. CAD is linked to the blockage/narrowing of coronary arteries that typically occurs due to fatty material/plaque buildup leading to an inflammatory process of athero-sclerosis. A viable intervention may be antibiotics in the secondary prevention of CAD. This systematic review aims to assess the role of antibiotics compared to placebo in the secondary prevention of CAD.

Methodology: This systematic review adhered to PRISMA guidelines. We searched PubMed/MED-LINE, Cochrane Central, Web of Science, and CINAHL Plus. The following keywords were used: Coronary artery disease, coronary heart, acute coronary, antibiotic. Adults aged 18 or above with a diagnosis of CAD (myocardial infarction, stable/ unstable angina) treated with antibiotics or no treatment (i.e., control) were included. In total, seven trials were included, and the results were tabulated.

Results: The trials (6 studies, 336 participants) were conducted in Korea, Finland, India, Canada, Serbia, Greece, and Italy. In total, 123 participants had a positive smoking status, 101 patients had diabetes, 204 participants had hypertension, and 154 had hyperlipidemia. The interventions included doxy-cycline (20-100 mg/day), ciprofloxacin (1000 mg/ day), and erythromycin (25 mg/kg). On noting outcomes post-treatment with antibiotics, the majority of trials presented no statistically significant reductions in CAD adverse outcomes, mechanical ventilation requirements, or length of hospital stay. However, in one trial, Sanati and colleagues reported improvement in echocardiographic findings post-antibiotic treatment. In the TIPTOP trial, the deaths/adverse were less in the antibiotic-treated group but with no statistical significance.

Conclusion: We conclude that antibiotics, whether quinolones or macrolides were either non-beneficial or harmful on assessing death and adverse events among patients with CAD. Current evidence does not support the use of antibiotics for CAD secondary prevention. However, we do posit that larger rand-omized controlled trials may help in concluding once and for all the benefits, if any, in this case. Further studies must ascertain the correct initiation timings of antibiotics, the dosage used, and the treatment period with follow-ups post the 24 months as well.

Coronary artery disease (CAD) is a collective term to denote the number of diseases, including stable and unstable angina, myocardial infarction, and sudden cardiac death [1]. CAD is estimated to be the leading cause of death across the world as per the World Health Organization (WHO), with 15.5 million individuals suffering from the ailment in the United States [2, 3]. Over three-quarters of the 7.4 million deaths due to CAD occur in low- and middle-income countries [3]. CAD also bears significant healthcare costs nearing $207.3 billion in the US per annum [3]. The pathogenesis of CAD pertains to the blockage or narrowing of the coronary arteries that supply the heart with blood [4]. This sequence typically occurs post the buildup of fatty material and plaque in the walls of the coronary arteries that lead to athero-sclerosis [4]. Individuals with CAD have a higher risk of cardiovascular events such as stroke, myo-cardial infarction, and cardiovascular death [4, 5].

Rudolf Virchow first proposed the association between ischemic heart disease and infections more than 100 years ago [6]. Recently, scientists have identified immune cells such as T lymphocytes and macrophages in coronary vessels lining [7]. The evidence for a possible association between Chla-mydia pneumoniae infections and atherosclerosis, myocardial infarction, and coronary heart disease is provided in pathology, seroepidemiology, and animal studies [8]. An intervention that may be pertinent to countering the various bacteria and CAD is the use of antibiotics [9].

We conducted this study following PRISMA guide-lines [10]. A combination of the following keywords was used across PubMed/MEDLINE, Cochrane Central, CINAHL Plus, and Web of Science: Coronary artery disease, coronary heart, acute coronary, antibiotic. The inclusion and exclusion criteria are enlisted below (Table 1). The PRISMA flowchart is displayed in Figure 1. The data was extracted onto a shared spreadsheet and analyzed. No funding was obtained for this study. An ethical review committee was not required as only secondary clinical data were analyzed.

Table 1: Inclusion and exclusion criteria were employed for this study. 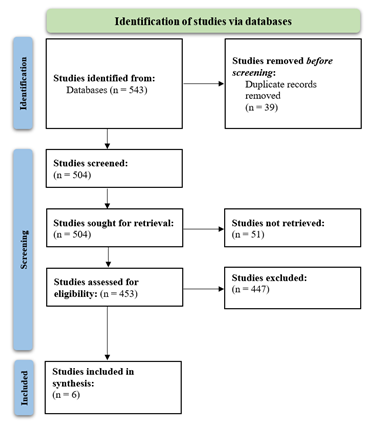 In total, six studies were included that compared antibiotics versus no intervention in 336 patients that had CAD. The trials were published between 2011-2019. The characteristics of included studies are listed in Table 1. Kim et al., 2012 randomized a total of 75 patients. The total time of treatment was 3 weeks, and the length of follow-up was 6 months. The interventions included doxycycline 20 mg orally twice a day for 3 weeks post coronary stenting in the experimental group (n=25) [11]. The outcomes post-treatment were reported to be no cardiovascular deaths, non-fatal myocardial infarctions. In total 10 patients from both the EG and CG required revascularization at the target lesions post coronary stenting; there were no statistically significant differences in target lesion revascularization rates among the two groups (P>0.05) [11]. Kami et al., 2014 included a total of 31 patients with treatment timelines of 4 months. A follow-up was not conducted. The participants were intervened with doxycycline orally (100 mg/day) for 4 months. The results yielded no differential effect on peripheral vascular endothelial function compared with placebo. No quantitative data were provided for synthesis [12].

Sanati et al. 2019 studied a total of 68 patients with a treatment time of one week and maximum follow-up at 40 days. The experimental group was administered doxycycline 100 mg orally two times a day [13]. Adverse events and mortality among the included cohort of patients were not reported [13]. However, the authors noted that the LAV (P=0.03), LV end-diastolic volume (P=0.03), and LV end-systolic volume (P=0.01) rose less in the experimental group as compared to the control group [13]. Schulze et al., 2013 treated a total of 20 out of 42 patients for 5 days [14]. Doxycycline (40 mg orally) for 5 days was provided to the experimental group, and the patients were co-intervened with coronary artery bypass surgery [14]. The randomized, double-blind, placebo-controlled study was performed in patients with CAD to determine whether doxycycline reduces cardiac mechanical dysfunction, troponin I degradation after reperfusion, and matric metalloproteinase activity. The authors found that treatment with antibiotics did not improve cardiac mechanical function after reperfusion. No changes were noted among EG and CG groups in the tissue or plasma troponin I level at 10 minutes of reperfusion. Overall, the authors found that while doxycycline did not improve myocardial stunning after the coronary artery bypass graft surgery, there were reductions in cardiac matrix metalloproteinase-2 activity (P=0.01) [14].

Thomaidou et al. 2017 administered erythromycin (25 mg/kg) 12 hours before and after coronary artery bypass grafting surgery for a total of 1-2 days [15]. The total length of follow-up was 3 months. On noting outcomes (i.e., delirium, mechanical ventilation duration, length of stay in ICU, in-hospital stay), the authors found no statistical difference between the intervention and control groups [15]. 10 out of 40 patients in the CG (10/40) and EG (10/40) groups had desaturation events intraoperatively. Out of these 10 patients in the CG, all of them had postoperative cognitive decline, whereas half of the patients in the erythromycin group (5/10) recovered (P<0.01) [15]. Three months after surgery, 8 patients (80%) in the control group vs 3 patients (30%) in the erythromycin group presented with postoperative cognitive decline (P<0.02) [15]. The TIPTOP trial (2014) was conducted among 80 patients for a total of 7 days, with maximum follow-up at 6 months [16]. In the intervention group, one death and one case of stroke were reported [16]. Four patients reported worsening of NHYA class III-IV score or were admitted for CHF [16]. In the control group, there were 4 deaths, 2 strokes, one episode of reinfarction, and 7 worsening of NHYA class III-IV scores or hospital admissions for CHF [16].

Our study finds that the clinical use of macrolides and quinolones for the secondary prevention of coronary heart disease is not supported by the available data. Based on results obtained from 6 trials, including 336 patients, the use of antibiotics was ineffective in the secondary prevention of cardiovascular events. In terms of mortality and adverse events, limited benefits were noted. Future trials on the safety and efficacy of macrolides and quinolones require longer follow-up to assess any adverse events. The association of CAD and C pneumoniae was noted in serological studies that investigated anti-C pneumoniae IgG antibody titer [17, 18]. However, the recently conducted studies suggest that C pneumoniae DNA is present in the peripheral blood sample of around 8% of patients with CAD; this means that while C pneumoniae is a risk factor for CAD, recent studies do not find a strong cause and effect relationship. The previously presented hypothesis that C pneumoniae infection and CAD are correlated based on IgG titer evidence is worth questioning [18]. When considering immunoglobulin titer evidence and C pneumoniae DNA samples, the correct timing of conducting tests and administering therapy plays a role in the overall efficacy of antibiotics for CAD [18]. In the event that an early C pneumoniae infection has occurred, the antibiotics must be administered early to prevent atherosclerotic processes [18].

Chlamydia pneumoniae has been the most frequent bacterium linked to ischemic heart disease. C. pneumoniae has also shown in vitro ability to infect smooth muscle cells, macrophages, and vascular endothelial cells. Elevated IgG titers to C. pneumoniae have been linked with acute myocardial infarctions in addition to being detected in atherosclerotic specimens. Further, rabbits that have been inoculated with C pneumoniae have shown the progression of coronary atherosclerosis that is prevented with azithromycin treatment. Although inflammation is considered to be a risk factor for atherosclerosis, antibiotic therapy does not have a major role in the secondary prevention of this disorder. Several multicenter trials have been conducted and were included in this systematic review. Our review collates the most recent evidence (published and unpublished trials), where adults with CAD were included. A limitation of this study is the lack of available extractable trial data. The effects of antibiotics on quality-of-life outcomes were unclear. No studies were conducted using antibiotic classes other than macrolides or quinolones. It is imperative to note recommendations by the European Medical Agency (EMA) [19]. EMA notes that when assessing adverse events, P values are of limited value as there are concerns about the severity and seriousness of the outcome. The statistical test of significance does not equate ‘the demonstration of equivalence.’ Our findings do demonstrate statistical significance among a few of the listed trials. However, the trials concluded that the antibiotic intervention was less beneficial compared to no treatment.

Our systematic review concludes that antibiotics, whether quinolones or macrolides in the secondary prevention of CAD, tend to be harmful or non-beneficial when assessing mortality and other adverse events. The findings are in accordance with current evidence that does not promote the clinical use of said antibiotics in the secondary prevention of CAD. Our findings were based on six trials employing a total of 336 patients, where the follow-up data was scarce. Most of the included trials did not achieve statistical significance in clinical outcomes across those treated with antibiotics compared to placebo; however, as EMA's guidelines posit, significance does not equate to equivalence. To truly determine efficacy and clinical benefits, we suggest that larger randomized controlled trials assess the adequate timing of beginning antibiotic administration, dosage, and the total period of treatment with longer follow-up periods.