# - These authors have equally contributed to this work.

MAPT (Microtubule Associated Protein Tau) is a Protein Coding gene. Aberrant expression of MAPT has been reported to be associated with several types of tumors, such as gastric, breast, and colorectal cancer, and so on. However, the role of MAPT in HCC (Hepatic carcinoma) is still poorly understood. In our research, MAPT-related data mining and analyzing were used publicly-available data from TCGA, GEO, Oncomine, and HPA databases. The survival curve was shown and analyzed by using Kaplan Meier Plotter. Gene Set Enrichment Analysis (GSEA), TIMER, STRING, and R package were used to explore the function and potential mechanism of MAPT in HCC. The results show that MAPT is overexpressed in HCC samples and is correlated with worse prognosis of patients with HCC. Bioinformatics analysis showed that MAPT contributed to the development of tumors through a variety of mechanisms. In conclusion, the Up-regulation of MAPT was significantly linked to poor prognosis in HCC patients, and it could be a new therapeutic target for HCC therapy.

Hepatocellular carcinoma (HCC) is the most common malignancy with a high mortality rate in many parts of the world [1]. During the last few decades, significant advances have been achieved in understanding the epidemiology, risk factors, and molecular mechanisms in HCC [2]. Nevertheless, the annual mortality rate associated with HCC has increased substantially over the past two decades [3]. Determining accurate prognostic biomarkers and revealing therapeutic targets for HCC is therefore urgent. The microtubule-associated protein tau (MAPT) gene is located on chromosome 17 (17q21) and encodes for the protein Tau [4]. The MAPT gene is of central importance for several neurodegenerative diseases [5]. Interestingly, growing numbers of studies in recent years have been conducted on the function of MAPT in tumors; its expression and role in different tumors have been found to be changed. Previous research demonstrated that higher serum levels of MAPT were independently related to poor prognosis in patients with metastatic breast cancer [6]. Conversely, initial analyses, reported by Saif Zaman et al., suggested that a higher expression of MAPT associated with better overall survival in neuroblastoma [7].

However, MAPT in HCC has been rarely discussed. Zhang developed and validated a prognostic nomogram to predict the overall survival of HCC patients, in which MAPT acts as a significant variable [8]. Bioinformatics analysis by Qi revealed that MAPT serves as an upstream regulator of AMELY in HCC [9]. Despite this, the expression level, clinicopathological significance, and the biological functions and associated mechanisms of MAPT in HCC had not reported to date. In this study, GEO, Oncomine, HPA, and TCGA databases were used to clarify the potential connection between the expression of MAPT and prognosis of HCC patients, as well as the association between MAPT and clinical parameters. Furthermore, the correlation between the expression of MAPT and prognosis of HCC patients was performed by using survival analysis based on Kaplan Meier Plotter. Finally, initial studies of the mechanisms of MAPT in HCC were carried out by a series of online databases and bioinformatics software packages, hoping to provide useful insights into the current research in HCC.

Gene expression data were divided into a high and a low group based on the median level of MAPT expression to elucidate the significant function and pathway of MAPT in HCC prognosis by using GSEA software (https://software.broadinstitute.org/gsea/) [15]. A function or pathway term with P-value <0.05. FDR<0.05 was considered statistically significant.

We perform a Protein-Protein interaction network of MAPT by using the STRING database (https://string-db.org/). Gene Ontology (GO) enrichment analyses were used to investigate gene sets related to MAPT by using the R package "cluster profiler" [16]. In our research. GO terms were visualized by R package "GO plot" [17], and terms with FDR < 0.05 were considered statistically significant.

The overlap between the 116 immune?related genes and 500 most differential survival genes in HCC contained three genes (BIRC5?MAPT?SPP1) as shown in the Venn diagram (Figure 1C), Three genes are highly expressed in HCC, and GEPIA shows that their expression has a significant relationship with the prognosis of patients. Among the three genes mentioned above, we selected MAPT, still poorly understood in HCC, to assess its diagnostic and prognostic value and the mechanisms it may involve in HCC.

A meta-analysis of MAPT expression in 5 analyses with verge values was determined as p-Value 0.05, fold change >1, and the top 10% gene rank in the Oncomine database was performed in our research. The findings have shown that the expression levels of MAPT mRNA were significantly higher in human HCC samples than those in the non-tumor samples (Figure 2A). Analysis of different databases in GEO revealed that MAPT mRNA was significantly upregulated in HCC in GSE25097, GSE45436, GSE55092, compared with that in normal liver tissues (P < 0.001, Figure 2B-2D). The details of the GEO series used in this analysis can be seen in Table 1. Further analysis shows that the protein expression of MAPT was significantly elevated in HCC samples compared with normal tissues in the HPA database (Figure 3).

3.4 Association between the expression of MAPT and the clinicopathology variables

In our study, gender, age, histologic grade, TNM stage, race, and other a total of 21 factors in clinical data were tested in this study to identify the relationship between MAPT and clinicopathological characteristics (Table 2). The findings indicated that MAPT overexpression was significantly associated with new tumor events after initial treatment (P <0.001, Table 2). However, there is no correlation between MAPT expression and gender, age, histologic grade, TNM stage, or other clinicpatho-logic characteristics. A univariate analysis revealed that MAPT expression levels, pathologic stage, and TNM stage correlated with the prognosis of patients (P < 0.05). To further explore factors associated with patients' survival, a multivariate Cox regression analysis was performed on eight variables. The results showed that MAPT expression levels (P < 0.001), histologic grade (P = 0.018) and stage T (P = 0.001) and stage M (P = 0.047) were independent prognostic factors associated with overall survival (OS) in HCC patients (Table 3).

3.5 The relationship between MAPT expression and prognosis in HCC patients

The correlation between the expression level of MAPT and the immune infiltration in the tumor microenvironment was analyzed by Spearman correlation and then generated by TIMER. The plot shows that the MAPT was positively correlated with macrophages, Conversely, no associations were observed between MAPT and infiltration of B cells, CD4+ T cells, CD8+ T cells, neutrophils, and dendritic cells (Figure 7).

3.8 Result of the GSEA tool reporting the most significant KEGG pathways 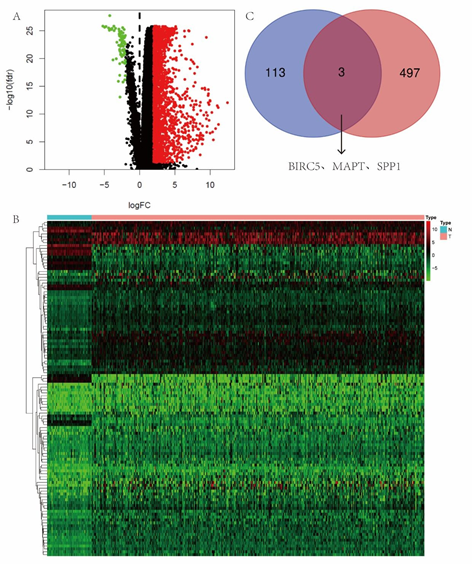 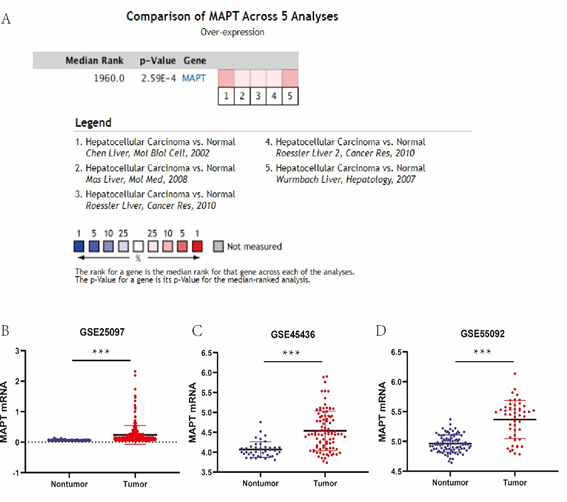 Figure 2: (A) Oncomine analysis of MAPT expression in HCC. (B) MAPT mRNA expression levels between tumor and nontumor tissues in HCC patients in GEO database series.

Table 1: Details of GEO series included in this analysis. 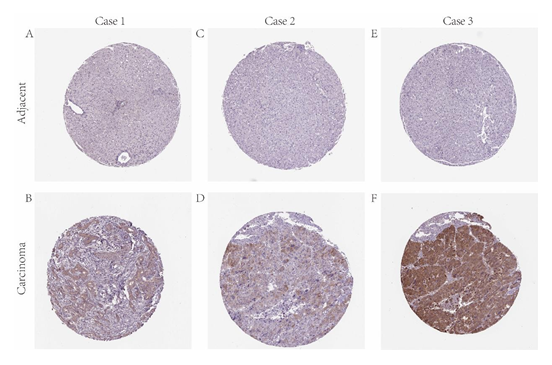 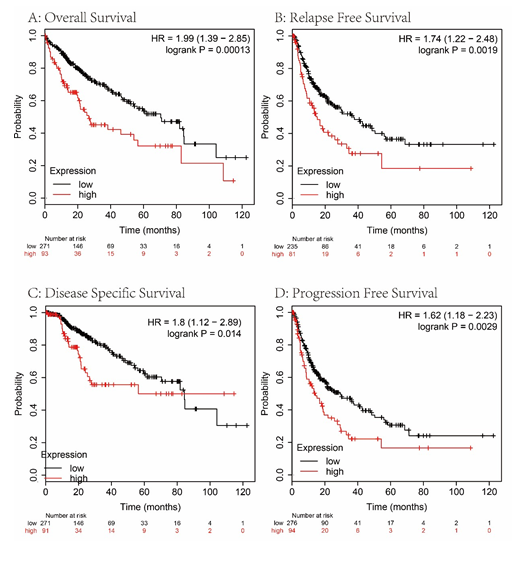 Figure 4: The effect of low vs. high MAPT expression in patients with HCC on OS, RFS, DSS and PFS time (A-D). 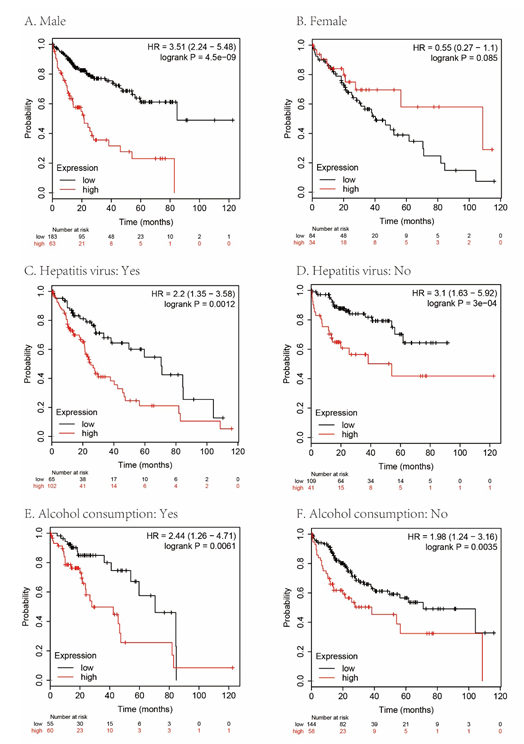 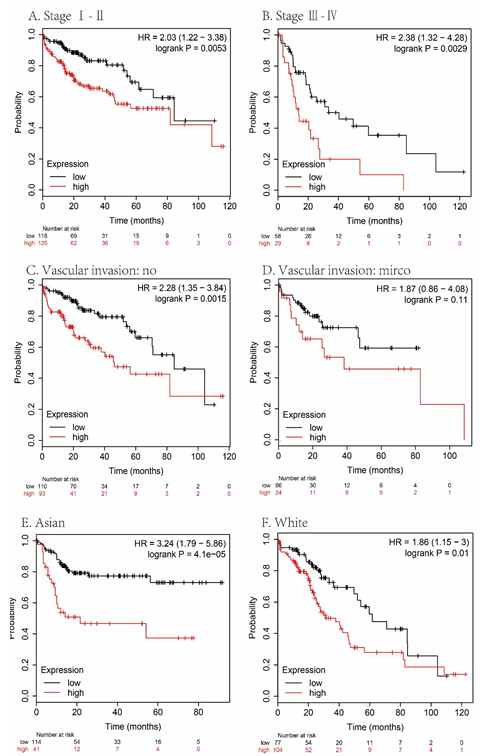 Figure 7: Association of MAPT expression with immune infiltration in HCC. 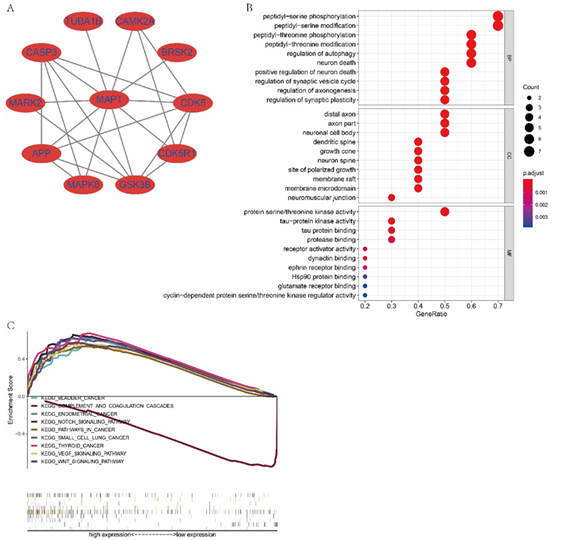 Previous studies about MAPT related diseases mainly focused on neurological disorders such as Dementia, Alzheimer's Disease, Parkinson's Disease, and so on [20-23]. However, recent studies have drawn much attention to its role in the tumor over the past few years. Analysis by Ricardo Gargini et al. suggests that MAPT is aberrantly expressed in a number of tumor types and shows a general association with prognosis [24], although its exact molecular mechanism and function in cancer have not yet been elucidated. Besides, many studies showed that the aberrant expression of MAPT in many cancers, such as neuroblastoma, breast, and prostate cancer [6, 7, 25]. Nonetheless, the survey about MAPT in HCC was still lacking. In light of the previous studies mentioned above, we undertook this research to investigate the potential value of MAPT in HCC. In this research, we found that overexpression of MAPT is significantly in HCC, and the high expression levels of MAPT in HCC were significantly associated with worse OS. This conclusion was in general agreement with that in breast cancer. Regretfully, the serum MAPT levels in HCC patients were not collected in the present study. In addition, MAPT expression was associated with recurrence after initial treatment. It indicates that HCC patients with high MAPT expression are more likely to relapse. Furthermore, a weak positive correlation was observed between MAPT and macrophages in HCC. Liver macrophages play a significant role in acute and chronic hepatic diseases, and they orchestrate inflammation, fibrosis, tumor progression, and angiogenesis, as well as tissue repair and tumor surveillance [26]. The result suggests that there are subtle correlations between MAPT and HCC.

Functionally, among gastric cancer and epithelial ovarian cancer patients, lower expression of MAPT is correlated with increased susceptibility to paclitaxel therapy [27, 28]. This suggests that MAPT levels might be a marker for predicting the sensitivity of tumors to chemotherapy. More than that, MAPT promotes microtubule assembly and stability [29]. However, MAPT was aberrantly expressed in various tumors. Due to the different microtubule composition of different cell types, a tentative inference on the result is that MAPT-induced microtubule dynamics changes may have different effects on cell behavior, depending on the origin of the cell tissue [25]. A complete description of a protein's function requires an understanding of all the chaperones to which it specifically binds. KEGG and GO enrichment analysis was performed on the genes in the protein-protein interaction network, and the results demonstrated that MAPT might participate in several tumor-associated pathways and oxidation-reduction processes in our research. GO enrichment analysis of genes that show MAPT is mainly involved in biological processes such as peptidyl−threonine phosphorylation and peptidyl−serine phosphorylation. Its molecular function is primarily related to the regulation of serine-threonine protein kinase activity. Serine-threonine protein kinase involves a variety of proteins and plays a wide range of molecular features in many tumors [30, 31, 32]. The above results show that MAPT may function as an upstream regulatory factor to participate in the regulation of serine-threonine protein kinase activity and participate in both tumor initiation and progression of human cancers. Unfortunately, no experimental study has been carried out to find the potential oncogenic mechanisms of MAPT in HCC development.

Accordingly, further experiments are required to demonstrate the specific mechanism of its cancer-promoting effect. Taken together, this study provides the first detailed analysis of evaluating the expression level of human MAPT protein and mRNA in HCC. The expression of MAPT was significantly overexpressed compared with that in non-tumor liver tissues in HCC based on TCGA, Oncomine, HPA, and GEO databases. MAPT was remarkably overexpressed in HCC tissues and was inversely associated with OS and RFS of HCC patients. Furthermore, our initial analyses also show the signaling pathways that MAPT may be involved in, and the molecular functions, biological processes that MAPT may participate in. We will inform the design of future experimental studies in light of our results. In summary, MAPT may be useful as a predictive diagnostic factor in HCC and as a possible therapeutic target.