Enteric Fever with Concomitant Pancreatitis and Cholangitis. A Case Report-Based Review of the Literature

Here we present a case of concomitant pancreatitis and cholangitis in a young female patient with culture-proven Salmonella Typhi in the blood which was sensitive to Meropenem and Azithromycin only. The multiple drug-resistant strain of Salmonella Typhi can lead to serious complications as was present in our case. The resistance is acquired by alteration in the genome sequence. Currently, control of such an unknown outbreak of Salmonella Typhi's multiple drug-resistant strains are important, since it is a serious healthcare issue in disease control and prevention of endemic countries.

Enteric fever consists of typhoid and paratyphoid fever, caused by Salmonella enterica serotype Typhi and Paratyphi A, B, and C. The clinical manifestations of both are similar but the intensity of paratyphoid fever is less severe. Salmonella typhi organisms are gram-negative, anaerobic, non-encapsulated, flagellated bacilli [1]. Mostly, infections by Salmonella typhi occur in developing countries and are the highest in incidence in areas with poor sanitation. The incidence of the disease increases during the hot, dry season or after heavy rains in which drinking water is contaminated by the sewer system. Over the past century, there has been a dramatic fall in the incidence of Typhoid fever in the United States due to improved sanitary conditions, water treatment and food handling practices and mostly are now acquired by contact with asymptomatic carriers.  In endemic areas, children aged 1-5 years are at the highest risk of developing an infection due to lower immunity and the disappearance of their maternal antibodies. Susceptibility to Typhoid fever is increased in people with co-existing illnesses such as HIV-infection or people taking antibiotics or proton pump inhibitors, the latter reducing gastric acid, which is a primary host defense mechanism against Salmonella typhi. Infection is spread via a fecal-oral route by food or water that is contaminated by an infected person with active disease or an asymptomatic chronic carrier [1]. 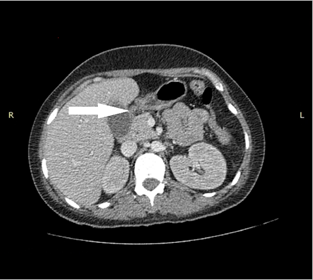 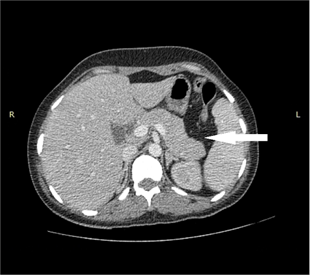 Figure 2: Computerized tomography scan of the abdomen showing focal enlargement of the distal body and tail of the pancreas.

During hospital course, the patient’s antibiotics were shifted to intravenous Meropenem with aggressive intravenous hydration while her deranged liver function enzymes along with serum amylase and lipase were gradually on a decreasing pattern, potassium levels returned to normal after intravenous replacement.

The fever also settled after 7 days of starting antibiotics, and the patient was managed conservatively without opting for Magnetic retrograde cholangiopancreatography (MRCP) or Endoscopic retrograde cholangiopancreatography (ERCP). After completion of antibiotics coarse, the patient was discharged on oral medication with a follow-up in one week in an ambulatory clinic setting. On the follow-up, the patient was Afebrile with no abdominal pain and jaundice clinically improved, along with normal Liver Function Tests, serum Lipase and Amylase.

Enteric fever is defined as an acute systemic disease is a manifestation of organism Salmonella enterica serotype Typhi which is globally disseminated with an estimated prevalence of 17 million cases and 600,000 casualties [1]. Enteric fever is endemic in areas of the world that are known for poor sanitation, food malpractices and consumption of contaminated water that are Africa, Latin America and Asia (Pakistan and Indian subcontinent) [2]. Typhoid fever presents as sustained fever, headache, and malaise. The severity of the illness has been associated with the virulence of the particular Salmonella typhi strain as well as the immunocompetence, age, and nutritional status of the patient [1]. After the ingestion of Salmonella typhi, approximately 10-20% develop acute diarrhea which lasts for 7-14 days, followed by fever, increasing in a stepwise manner over a 3-5 days period, which is usually higher during the late afternoon. Adults and older children may present with constipation instead of diarrhea. Enteric fever manifests itself with symptomatology divided into intervals of weeks. First-week clinical outcomes are headache, fever, anorexia, nausea, vomiting, abdominal pain and constipation. The second week comprises of rose spots, bradycardia, hepatosplenomegaly, and abdominal tenderness. Complications of enteric fever are prevalent in the third and fourth week, including intestinal perforation [3], pneumonia, ataxia, psychosis, altered consciousness, pancreatitis, cholangitis, cholecystitis and nephritis [4].  On physical examination, findings include the brown coated tongue, hepatosplenomegaly, decreased auditory acuity, nuchal rigidity, confusion, bradycardia, rose spots which are blanching maculopapular lesions 2-4mm usually appearing on the chest and abdomen.

Fever usually persists during the second week of infection and the patient appears significantly ill. Significant gastrointestinal complications related to lymphoid hyperplasia and necrosis especially in the ileocecal area are seen in the third week of the illness, such as bleeding and perforation, the latter being a surgical emergency requiring resection of the affected bowel, supportive care, and broad-spectrum antibiotics, as it can further cause Gram-negative sepsis. Rare complications are cholecystitis, cholangitis, and pancreatitis.  Diagnosis of enteric fever is certified by blood culture, urine culture, and stool culture with the most accurate test of bone marrow culture [1]. Enteric fever is to be immediately cured with empiric antibiotics, preferred agents are fluoroquinolones, ciprofloxacin 500 mg twice daily for 7-10 days. Other fluoroquinolones chosen are norfloxacin, ofloxacin, and levofloxacin. An alternative regimen is intravenous ceftriaxone for 14 days rendered safe in children and pregnant women due to cartilage erosion effects of fluoroquinolones [1]. Acute pancreatitis and cholangitis are rare and uncommon complications of enteric fever. Acute pancreatitis and cholangitis complicate enteric fever through the transmission of bacteria by hematogenous and lymphatic spread, by targeted descent of bacteria migrating into pancreatic and common bile duct from the duodenum and biliary tree [5, 6]. Signs and symptoms of acute pancreatitis caused by salmonella typhi are minimal than isolated acute pancreatitis, patients usually are asymptomatic, or complaints of abdominal pain, nausea, vomiting [6, 7]. However, the diagnosis of enteric fever mediated pancreatitis is established on elevated levels of amylase and lipase and computerized tomography scan outcomes [5, 6, 7]. Cholangitis complicating enteric fever manifest itself with high spiking fever, chills, jaundice, purulent bile under high pressure, mental confusion, and hepatic abscess [8]. Diagnosis is verified by leucocytosis, slightly raised alkaline phosphatase and transaminases [9]. Salmonella typhi along with its antimicrobial immune strains has raised alarming concerns worldwide especially in India and Asia [10, 11]. USA based study of resistant strains calculated about 25% strains was resistant to one of the antibiotics while 17% to five or more drugs [1]. R-factor plasmid encrypts for immunization to chloramphenicol, amoxicillin, and trimethoprim sulfamethazine complex. Treatment modalities utilized for acute pancreatitis complicating enteric fever is coverage by broad-spectrum antibiotics that are gentamicin, ampicillin, and metronidazole [11, 12, 13]. Non-pharmacological interventions are rehydration and NG tube placement with intermediate suction [14, 15, 16]. Cholangitis can be cured by the antimicrobial regimen of amikacin, an aminoglycoside [7, 17] while surgical intervention to eradicate microbes is cholecystectomy in carrier patients [18, 19].

Our case presents a 25-year-old female, with fever, nausea, vomiting, and jaundice. On examination, there was right upper quadrant tenderness with mild hepato-splenomegaly on ultrasound, the pancreas was swollen

and dilated common bile duct. Laboratory findings were severe hyperbilirubinemia and sepsis, with raised serum Amylase and Lipase, and the patient's blood culture report also turned out to be positive for Salmonella Typhi. The diagnosis of concomitant pancreatitis and cholangitis was made on a background of Salmonella Typhi infection, with sensitivity to Azithromycin and Meropenem only. The outbreak of resistant Salmonella Typhi strains is associated with higher rates of complications. This resistance is acquired through a change in the sequence of the genome [20]. Currently, it is important to control such an unidentified outbreak of multiple drug-resistant Salmonella Typhi strains because it is a serious healthcare issue in disease control and prevention of developing countries.

Ethical consent to participate has been taken from the patient in the form of written informed consent.