Background: The appearance of cerebral haemorrhage (CH) as common MR imaging findings raise the question of how MR image acquisition and haemorrhage area quantification can help in understanding brain pathological changes as the result of various disease conditions such as acute brain injury, hypertension amyloid angiopathy and other diverse pathology. Neuroimaging is essential for the clinician to identify the cause of haemorrhage. In this study, we examined 25 cerebral haemorrhage MR images with an objective of comparing two different sequences viz., susceptibility weighted imaging (SWI) and gradient recalled echo (GRE) on same patients and also to quantify the area of haemorrhage using manual selection and gray area threshold (automated selection) in the digital image.

Results: By other parameters set as constant, we were able to quantify hypointense signal changes at regions of cerebral haemorrhage on SWI when compared to no such notable changes in GRE in the case of amyloid angiopathy patients. Apart from this, lesions prospectively identified on SWI had a significantly greater area measured on the SWI image than those not prospectively identified on GRE.

Conclusions: There is an increased sensitivity in the CH detection in patients with amyloid angiopathy while using SWI sequence when compared to GRE in which we could not identify any signal changes in specific areas. Furthermore, the haemorrhage areas quantified by an automated cropping technique using ImageJ software yielded a precise lesion area method when compared to manual cropping. However, observation on increased sample size in this disease condition is required to confirm these preliminary findings to prognosticate CH.

Intracranial haemorrhage (ICH) a life-threatening problem which may be caused by trauma, or related to therapeutic anticoagulation, hence the earlier diagnosis can help in selecting an appropriate treatment [1]. Computed Tomography (CT) is an important technique for diagnosing acute cerebral haemorrhage, however, MRI is employed frequently because it's more accurate than CT and uses a specific sequence like GRE and SWI that detects and evaluate the haemorrhage within the brain [2-4]. MRI appears as an extremely smart device for diagnosis of acute haemorrhage [5]. MRI display advantages for the assessment of acute stroke [5]. A gradient echo (GRE) is simply a smart manipulation of the free induction decay (FID) signal that begins by applying an external dephasing gradient field across the tissue. GRE sequences are applicable in the assessment of suspected hemorrhagic stroke [6]. Susceptibility Weighted Imaging (SWI) is an associate MRI sequence that is especially sensitive to compounds that distort the local magnetic field which is helpful in detecting blood products. SWI has shown   greater depiction of hemorrhages compared to conventional imaging techniques, as well as two-dimensional (2D)-GRE T2*-weighted imaging [7]. The present study aimed to assess the analysis of gradient recalled echo (GRE) and susceptibility- weighted imaging (SWI) sequences in detection of acute intracranial hemorrhage and detect the micro hemorrhages using manual and automated (using ImageJ software package) selection of regions of interests on the slice.

Data is collected in the year of 2018-2019 from the department of radiology, Chettinad Hospital and Research Institute (CHRI). Hospital-based descriptive and prospective study. Twenty-five patients were included in this study, selected randomly based on the patient’s history of trauma and non- traumatic symptoms of high blood pressure, sudden & severe headache, loss of balance or coordination and patients with hemorrhage in the brain who undergone MRI were included.  Patients with metallic implants and cardiac pacemakers, claustrophobic patients were excluded. We used 1.5 Tesla SIGNA GE HDxt MRI scanner (Figure 1 A) with an 8 channel NV (NAVIGATOR) radiofrequency coil (Figure 1B). The bore size of the machine is 60cm. Both GRE and SWI sequence were used for recording the brain image. The number of patients were further classified into three subcategories based on their clinical history as follows, those with traumatic brain injury (TBI), with hypertention (H-BP) and with amyloids angiopathy (AA). 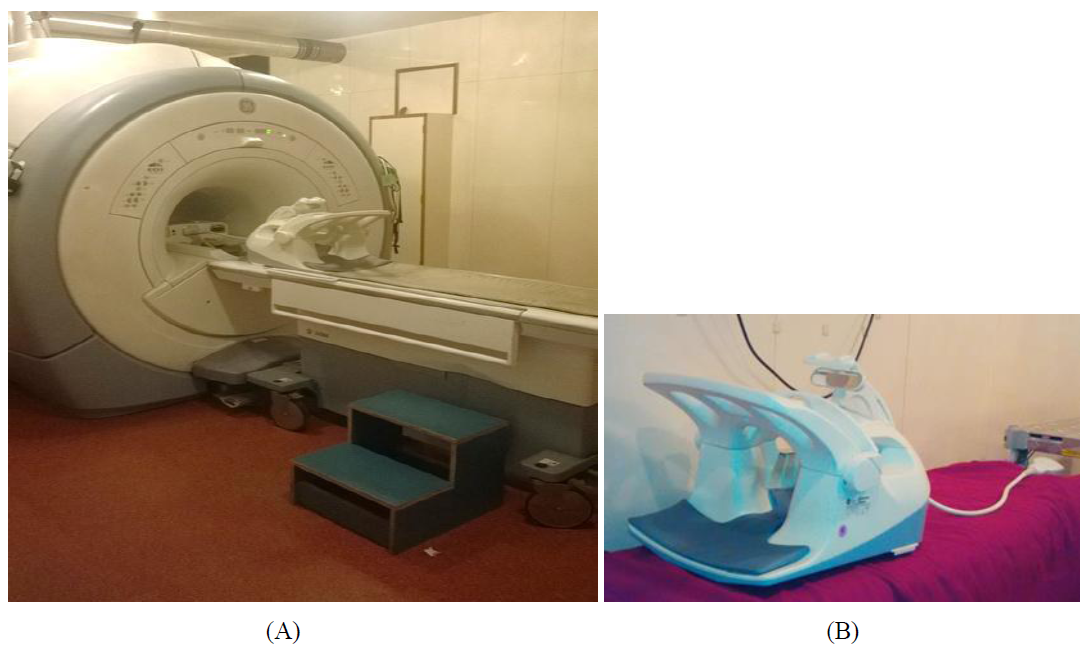 The research proposal was approved by the institutional human ethical committee of the Chettinad Academy of Research and Education (IHEC-CARE). The axial section of the brain image of SWI and GRE images which shows haemorrhage with hypointense signal for all the 25 patients were analyzed using ImageJ (NIH software package) and the area of hemorrhage was marked manually in the work station and also automatically selected by using Image package using thresholding and binarising technique. The computed

areas were used further for descriptive analysis using SPSS software. Table 1 shows the MR acquisition parameters for both the sequence.

Areas are measured from the slices which show greater hemorrhages in GRE and SWI sequence. The areas of hemorrhage are manually drawn and calculated in sq.cm (Figure 2).

Areas are measured from the slices which show greater hemorrhages in GRE and SWI sequence. The areas of hemorrhage are automatically measured and calculated. Using ImageJ software the areas of hemorrhage are cropped and converted into the binary image and then thresholded to measure the area of bleed (Figure 3). The area of measurements is calibrated with MRI work station and converted to square centimetres (sq. Cm). The values of the measured area are expressed as mean and standard deviation in both manual and automated methods and compared using a paired t-test (Table 2). The calculated mean area and standard deviation are presented a bar chart with whiskers (Figure 4). 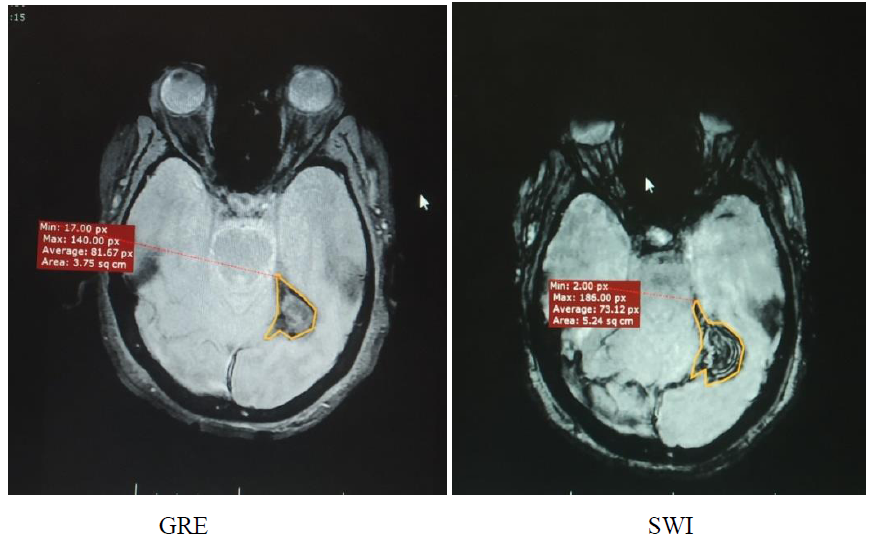 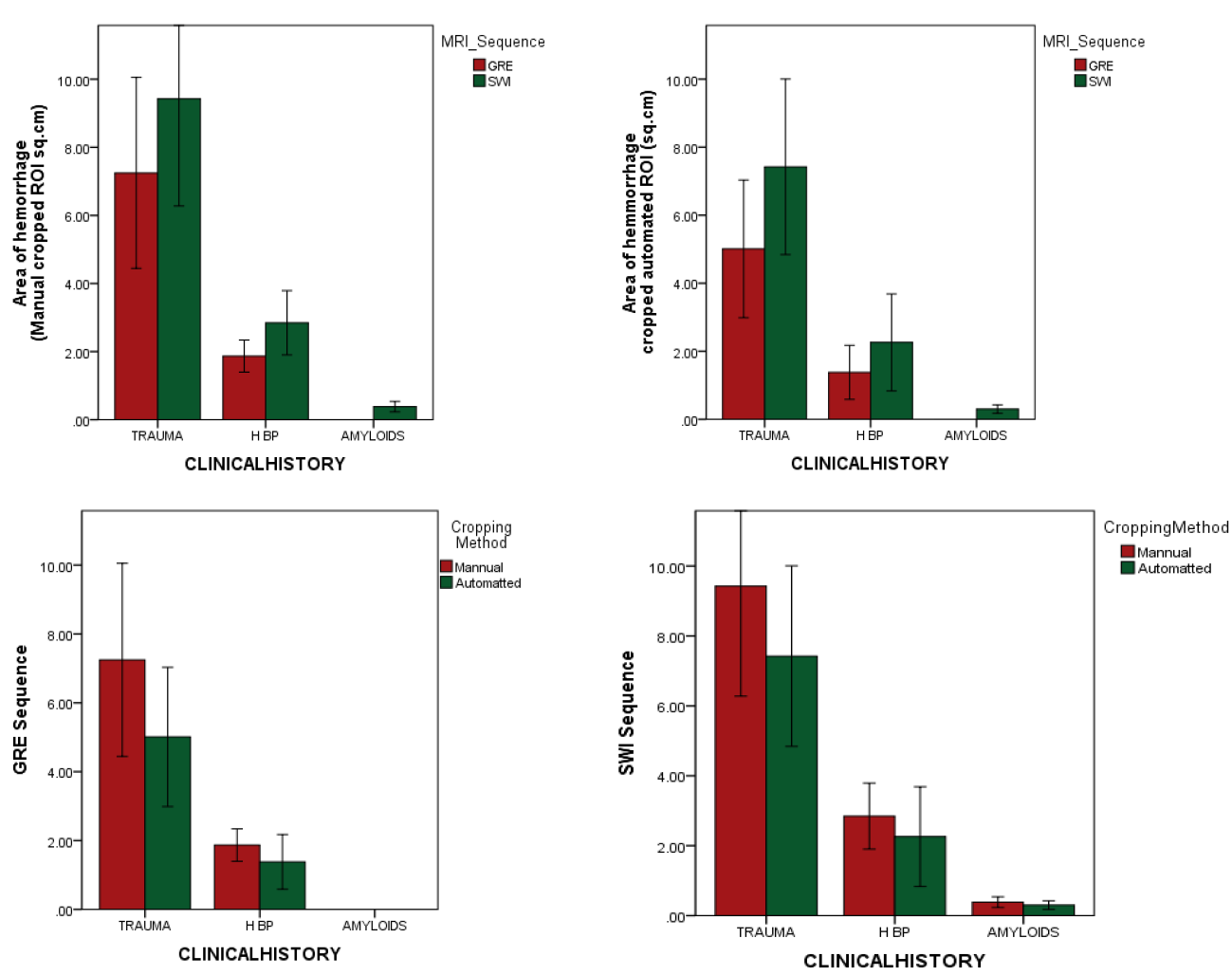 In this study, patients with brain haemorrhage were included and the qualitative assessment was done for the presence of blooming by a radiologist. The superiority of SWI comparing to GRE is evidenced in our preliminary observation. However, SWI sequences take more time to acquire than simple T2*, and may sometimes the image quality is not due to motion artifacts. Further to this, possibly more false-positive and ambiguous lesions may also occur with SWI sequence and are more difficult to interpret as it comprises many dark structures that could be misguided for microbleeds [8]. Earlier studies suggest that cerebral microbleeds (CMBs) can be identified better on SWI than GRE [8]. An earlier study with 14 patients found that SWI acquired using 3T were associated with better- identified microbleeds and showed a good contrast-to-noise ratio (CNR) [9]. Another study on 141 patients with dementia, CMBs were detected more commonly on SWI compared with GRE [10]. In the present study, if lesions are present, the areas are measured in quantitative manner by both manual and automatic methods with ImageJ software. In which, the areas of haemorrhage were cropped and converted into thresholded and made to a binary image and measured automatically and calibrated to sq.cm. The values of manual and automated methods are further analysed and grouped to mean and standard deviation based on the clinical observation, such as traumatic brain injury, high blood pressure and amyloid haemorrhages. Apart from the advantages associated with SWI, there are limitations some concerned with SWI, such as there is no gold standard view for haemorrhages to validate its reliability in MRI [11]. There will be little confusion in the detection of calcifications [12]. Considering the above limitations, in this study, we observed that 1) SWI sequence is more sensitive in detecting CH when compared to GRE, further to this 2) automated ROI selection improved the quantifying the area of lesion in the MR image.

In this prospective study, 25 patients have been included with a brain hemorrhage and have performed a qualitative assessment for the presence of blooming. If present, areas are measured in a quantitative manner by both manual and automatic methods. In this study, we showed that SWI has a higher sensitivity for micro hemorrhage detection when compared to GRE. Additionally, we found that the sensitivity and reliability of hemorrhage detection using automated area measurement methods is high when compared to manual area measurement methods.