The patient is a 48-year-old woman who presented with menorrhagia due to a massive uterine fibroid requiring multiple blood transfusions. Her case was complicated with extensive deep venous thrombosis (DVT) of the left LE with subsequent limb threatening compartment syndrome that resulted in severe hyperkalemia due to rhabdomyolysis and the need for renal replacement therapy.

The following is a report and literature review regarding a rare case of uterine fibroids. The patient developed significant complications and required a lengthy hospitalization.

The patient is a 48-year-old woman G0P0 with a known history of uterine fibroids. She was admitted with fatigue, vague abdominal pain and prolonged and severe menorrhagia resulting in anemia. Over the three weeks preceding her admission, she visited the emergency department twice with similar symptoms and received a total of 4 units of PRBCs. An endometrial biopsy done prior to her admission was negative for malignancy and a hysterectomy was planned. Her menorrhagia started 4 months prior to her admission, and she did not benefit from oral contraceptive pills (OCPs). Her past medical history was remarkable for hypertension. Her medications included amlodipine 5 mg po daily and OCPs. Physical exam was remarkable for: BP 112/83, HR 123, RR 18, Temp 36.4°C. The patient was obese and was noted to have edema and tenderness in the entire left lower extremity. Abdominal exam showed mild diffuse tenderness with no surgical signs. Initial laboratory evaluation revealed a hemoglobin of 63 g/L, creatinine 82.2 umol/L (0.93 mg/dl), and creatinine kinase (CK) 32 U/L. Transvaginal US showed the uterus measuring 22.4 x 13.7 x 16.5 cm. It was inhomogeneous and likely involved with multiple fibroids.

The patient was admitted to the hospital and received multiple PRBCs transfusions. Venous duplex ultrasound of the lower extremities revealed extensive occlusive deep venous thrombosis in the left distal external iliac vein, common femoral, femoral, common popliteal, and posterior tibial veins. CT angiogram of the abdomen and pelvis with lower extremity runoff revealed multifocal moderate to severe stenosis of the right and left peroneal arteries and the posterior tibial artery. A fundal mass in the uterus measuring 12.2 x 15.4 cm consistent with fibroid was noted. Figure 1 and 2. The fibroid was compressing the IVC. CT angiogram of the chest scan showed acute pulmonary emboli bilaterally. In view of extensive left lower extremity DVT and PE she was anticoagulated with heparin and an inferior vena cava filter was placed. On her second hospital day potassium rose to 8 mmol/L, creatinine was 197.3 umol/L (2.4 mg/dl), Na 136 mmol/l, Cl 104 mmol/l and serum CO2 16 mmol/l. CK was 5357 U/L on her second hospital day and rose to 48800 U/L and 58200 U/L on her third and fourth hospital days respectively. The patient was diagnosed with acute kidney injury due to rhabdomyolysis. She was started on hemodialysis (HD) in view of severe hyperkalemia. She also received HD on her third and fourth hospital days due to persistent hyperkalemia. The patient condition did not improve, and on her third hospital day the edema and tenderness of her left LE worsened and was associated with cyanosis consistent with phlegmasia cerulea dolens (PCD). Arterial pulses in left LE were diminished and she was unable to move her left foot including the toes. The patient was diagnosed with compartment syndrome due to extensive DVT resulting in severe rhabdomyolysis and was taken to OR for revascularization. She underwent Left iliofemoral venous thrombectomy and four compartment fasciotomy of the left leg to avoid limb loss. Further laboratory testing showed no evidence of hypercoagulable state. On her fourth hospital day she was transferred to a tertiary center for high risk hysterectomy. MRI revealed a massive uterus measuring 22cm with firm fibroid (12.3 cm x 14.4 cm) resulting in extensive small bowel and colon ischemia. The uterus was compressing the IVC, bilateral common femoral veins and right external iliac vessels. The uterus was heterogeneous with large necrotic areas. Five days after her transfer, she underwent total abdominal hysterectomy, bilateral salpingectomies, left oophorectomy, small bowel resection (155 cm) with subtotal colectomy and creation of jejunostomy and colostomy. She was noted to have areas of necrotic bowel with multiple perforations. Pathology revealed a partially infarcted (degenerative) leiomyoma. Resected portion of the colon revealed transmural ischemic necrosis. Resected small bowel showed mucosal necrosis. The patient received renal replacement therapy for 35 days. After cessation of HD her creatinine stabilized around 139.7 umol/L (1.7 mg/dl). 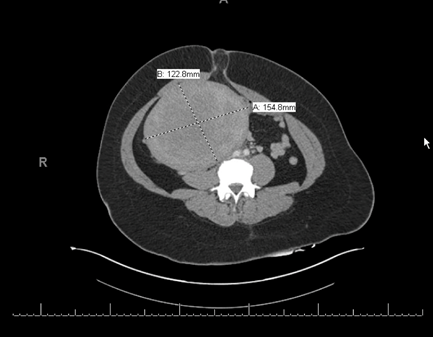 Figure 1: CT angiogram of the abdomen showing a fundal mass in the uterus measuring 12.2 cm x 15.4 cm consistent with fibroid. 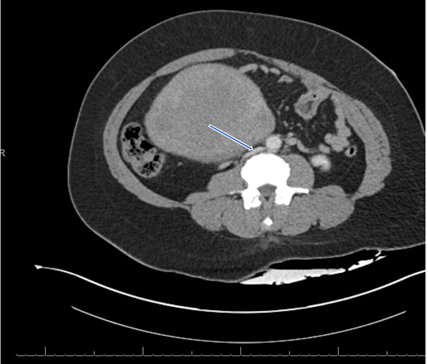 Figure 2: CT angiogram of the abdomen showing a fundal mass in the uterus compressing the inferior vena cava (arrow).

Uterine fibroids (leiomyoma) are benign smooth muscle tumors and rarely result in acute complications [1]. Fibroids are the most common pelvic tumors in women with a lifetime prevalence in excess of 80% in black women and close to 70% in white women [2]. Severe hyperkalemia in this patient unraveled the whole case. Evaluation of AKI and severe hyperkalemia led to measurement of CK and the diagnosis of rhabdomyolysis. A search for the etiology of the rhabdomyolysis led to careful examination of the left lower extremities and the diagnosis of compartment syndrome due to extensive DVT. Rhabdomyolysis is potentially life-threatening. Skeletal muscles breakdown and release their intracellular content including CK, myoglobin, potassium and phosphate [3]. Common causes include muscle trauma, medications, heat stroke, strenuous exercise, hypophosphatemia, infections and genetic disorders. The most sensitive diagnostic test is CK-MM subtype. CK starts to rise within a few hours of the injury and peaks after 24-72 hours. Early diagnosis of rhabdomyolysis is crucial because severe hyperkalemia may result in cardiac arrest. Rhabdomyolysis initial treatment involves aggressive hydration with IV fluids. Hemodialysis should be initiated without delay in case of life-threatening hyperkalemia [3, 4]. DVT due to venous compression, and limb-threatening compartment syndrome are rare complications of fibroids [5]. Edema is the result of mechanical venous outflow obstruction with subsequent decline in arterial perfusion and limb ischemia. Phlegmasia cerulea dolens (PCD) is a rare complication of acute DVT characterized by LE edema, cyanosis and pain. It may lead to arterial ischemia and high morbidity and mortality. PCD rarely results in compartment syndrome, especially in absence of trauma [6, 7]. Compartment syndrome is a complication of rhabdomyolysis and the reverse is true. Muscle ischemic and edema raises the closed muscle compartment pressure resulting in a vicious circle of worsening ischemia and increased pressure. Early diagnosis of compartment syndrome is crucial as well to avoid limb threatening ischemia [1, 8]. Brewer et al. [9] reviewed 30 reported cases of patients with thrombotic complications of uterine fibroids. DVT was reported in 58% of patients, while 10% had PE, and 26% had both. Interestingly 73% of the DVTs were on the left side as in the patient above. Subclinical May-Thurner syndrome (chronic compression of the left iliac vein by the right iliac artery) exacerbated by the fibroid was the possible cause of this localization. Bowel ischemia as seen in this case is an extremely rare acute complication of uterine fibroid. Superior mesenteric vein thrombosis is the likely etiology. This remains speculative because multiple imaging studies in this patient did not show evidence of arterial or venous mesenteric thrombosis. Sheikh reported a patient who presented with menorrhagia and found to have a fundal fibroid on ultrasound [10]. She later underwent a dilatation and curettage and a diagnostic laparoscopy. Nothing was done to the fibroid. She then presented with acute abdomen and at laparotomy she was found to have gangrene of the small intestine and mesenteric venous thrombosis.

The above was the first report of a large uterine fibroid resulting in several rare complications: extensive LE DVT with PCD and bilateral PE, compartment syndrome, bowel ischemia, and severe rhabdomyolysis requiring renal replacement therapy. Early recognition of such treatable complications is critical to avoid significant morbidity and mortality. Early diagnosis of rhabdomyolysis was the key factor in unraveling the whole case.

The author declares that there are no conflicts of interest.