Introduction: Peripherally inserted central catheters (PICCs) are becoming increasingly popular due to their ease of insertion through upper extremity veins, although they are not complications-free. PICCs can be irritating and cause endothelial injury and inflammation resulting in deep venous thrombosis (DVT). Estimates suggest that more than a third of all DVT in the upper extremities is caused by PICCs. This research highlights the incidence of upper extremity DVT in patients with PICCs and the relation with other comorbidities.

Conclusion: The risk of DVT was 5.7 % in patients who had PICCs. There was less risk of DVT in patients with diabetes mellitus, while there was no risk association with the other comorbidities.

Peripherally inserted central catheters (PICCs) have been popularly used since the 1980s. PICCs play a major role for patients as they serve as central venous access for antibiotics and chemotherapy agents during long-term drug therapy [1]. According to a recent analysis, PICCs are inserted in approximately 5 million people annually in the United States [2]. PICC is a thin and long flexible catheter made of biocompatible material, inserted percutaneously into the basilic or cephalic vein in the forearm or the antecubital fossa, often with the help of an ultrasound or fluoroscopy, the catheter is then advanced into the central circulation [3].

PICCs have become more popular and a very good alternative intravenous (IV) access for central lines due to its different advantages, including the easy insertion, short procedure time, few complications and the high rate of patient satisfaction [4, 5]. Although PICCs have brought numerous benefits, there are some potential complications, including deep venous thrombosis (DVT), infection, mecha-nical failure (migration, obstruction), and few others [6, 7]. Here in this study, we discuss the incidence of upper extremity (UE) DVT in patients with PICCs, and the significance and clinical correlation of some associated chronic comorbidities.

This study is a retrospective matched cohort, cond-ucted at a 343-bed community hospital in Rhode Island between January 2017 and December 2020. The IRB committee approved the protocol. The study goal was to find out the incidence of UE DVT in patients with PICCs, along with the relation of the clinical characteristics.We identified patients who received antibiotics through PICCs in our outpatient parenteral antibiotic therapy (OPAT) program. Those patients were discharged from the hospital with PICCs or received PICCs in the outpatient setting; and had received antibiotics for a period of 4 - 6 wee-ks for various infections.Duplex ultrasound results were reviewed to identify the patients with DVT. UE venous duplex scans were ordered for all patients who exhibited any signs or symptoms concerning for UE DVT including swelling, pain, redness around the PICC, fever, chills, or PICC malfunction.

An electronic medical record query was performed to identify all the patients meeting inclusion criteria. The patients were included if they were > 18 years old, had a PICC, and received IV antibiotics for a total of 4 - 6 weeks. Patients with superficial throm-bosis or thrombosis in another site were excluded. The incidence of PICC-associated UE DVT was calculated using simple statistics. The median time for UE DVT after PICC placement was calculated. Univariable analysis was used to determine if some comorbidities were associated with UE DVT. The level of significance was determined using P value of <0.05. Patients with PICC-associated UE DVT were compared with a control group of patients with PICCs but without UE DVT.

During the 4-year period, we reviewed the charts of 862 patients seen in the outpatient clinic, 438 patients with PICCs were followed in the OPAT program. UE DVT was diagnosed in 24 patients (5.47%).The median time to diagnosis was 21 days from PICC insertion. In patients who developed PICC-associated UE DVT, 4 patients (16%) were receiving thera-peutic dose of anticoagulation before the diagnosis of DVT. Once the DVT was diagnosed, patients were referred to the ED for further evaluation and management. All PICCs were removed in the ED after DVT diagnosis. We found that 30-day-mortality rate was zero.

Table 1: Baseline characteristics for all patients involved in the study.

Table 2: Univariable analysis of clinical characteristics for both groups. 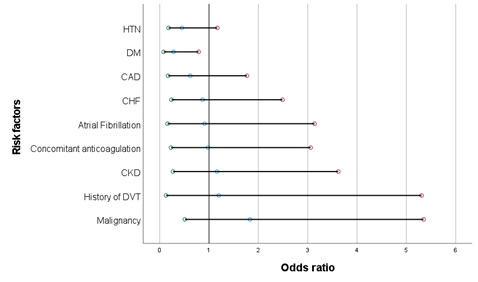 Graph 1: A graphical display of clinical characteristics with Odds Ratios (OR) and Confidence Intervals (CIs).

There were two main purposes for this study. The first was to assess the frequency of DVT in patients who had PICCs in the upper extremity. In this regard, the incidence was 5.47% (24/438); this was similar to a previous study in Spain which showed an incidence of 4.9% for catheter related thrombosis [8]. The second aim was to evaluate which comorbidities would affect the incidence of DVT. In that vain, there were three notable comorbidities that increased the odds of DVT (but not statistically significant), active cancer (OR 1.83, P = 0.242), CKD (OR 1.16, P = 0.725), and previous DVT (OR 1.2, P = 0.763). Nevertheless, among these three factors, active can-cer did appear to be the most impactful on the risk of developing DVT.

On the other hand, there were some unexpected findings. Diabetes mellitus was found to have a lower association with DVT (OR 0.28, P = 0.008). This finding is not supported by previous literature. In fact, a previous study has shown results suggestive of higher incidence of DVT in diabetic patients [9]. There were other variables that also showed a negative correlation with DVT including hyper-tension (OR 0.45, P = 0.059), CAD (OR 0.62, P = 0.353), CHF (OR 0.87, P = 0.79), AFib (OR 0.91, P = 0.589), and previous anticoagulation (OR 0.98, P = 0.62), but this association was not statistically significant. An earlier study showed that preexisting diagnosis of hypertension, malignancy, and CKD were all independent risk factors for developing UE DVT [10]. The reason as to why patients in the current study who had diabetes or hypertension were less likely to develop DVT is unclear. Perhaps they were taking medications that prevented DVT, such as an antiplatelet drug. Further research should be undertaken to analyze the effect of diabetes and hypertension on DVT risk before any strong conclusions are made.

Finally, there have been studies investigating the use of anticoagulation to prevent central venous catheter-related thrombosis. One of which is a meta-analysis which included 15 randomized controlled trials. It showed anticoagulation to be effective in decreasing the risk of both symptomatic and asymptomatic central line-associated DVT (RR 0.31 – 0.73). However, that was not the case for symptomatic DVT alone (RR 0.28 – 0.72) [11]. Our study has some limitations related to the retrospective nature, inclu-ding the unmeasured variables, and the control selection bias. Furthermore, our study is a single center study, had a small sample size, and at risk for recordkeeping and reviewing errors.

The risk of DVT in this study was 5.7 % in patients who had PICCs. There was less risk of DVT in patients with diabetes mellitus, while there was no risk association with the other comorbidities.This study could serve as a step to further to evaluate PICC-related DVTs and the associated risk factors. Further prospective studies or clinical trials are needed in this area before any strong conclusion can be made.

All authors declare that they have no conflicts of interest.