India has largest biodiversity in medicinal plants and has high knowledge of rich ancient traditional system of medicines (Ayurveda, Siddha, Unani, Amchi and local health traditions) which provides a strong base for their utilization. Solanum virginianum L., belongs to the family Solanaceae, is an important medicinal plant species in ayurveda and folklore medicine since time immemorial [1].  S. virginianum is commonly known as yellow berried night shade. Solanum surattenseBurm. (F) and Solanum xanthocarpum Schrad. and Wendl. are the synonyms of Solanum virginianum [2]. It is widely distributed in Asia including India, China, Nepal, Pakistan, Sri Lanka, Bangladesh, Afghanistan, Thailand etc. In India it is found in tropical, subtropical, and all the four geographical regions mostly in dry places. Morphologically S. virginianum is a prickly diffuse bright green perennial herb which is erect or creeping. Branches are numerous and young ones are covered with dense, stellate and tomentose hairs [3].

virginianum is one of the ten constituents of “Dashmoola”. Ayurvedic physicians commonly use Dashmoola in their practices. S. virginianum is a chemically valuable source of alkaloids, sterols, saponins, flavonoids and their glycosides [4], containing carbohydrates, fatty acids and amino acids [5], diosgenin and beta cytosterol [6], triterpene Lupeol [7], coumarins, scopolin, scopoletin, esculin and esculetin [8], alkaloids, flavoinoids and saponin and tolerable levels of heavy metals like Cu, Fe, Pb, Cd and Zn while bioactive steroidal glycoalkaloid khasianine in addition to solanine and solasomargine has been reported in S. virginianum. Solasodine serves as an important intermediate in the synthesis of steroidal hormone [9] and is an alternative to diosgenins as a precursor in synthesis of steroidal hormones like progesterone and cortisone [10,11]. Apigenin, another secondary metabolite from S. virginianum has antiallergic property while diosgenin exhibit anti-inflammatory effects [12]. Krayer and Briggs [13] reported the anti-accelerator cardiac action of solasodine and some of its derivatives Propagation of S. surattense, takes place only by seeds but it faces some difficulties such as low rate of germination under normal conditions, loosing of viability on storage, the progenies produced may not be true to type due to cross pollination [14].

Globally, plant tissue culture (PTC) has been recognized for its valuable and beneficial role in the production and conservation of plant-based resources [15]. PTC can be achieved with the help of different explants such as meristem culture, anther culture, ovule culture, endosperm culture, nucellus culture, embryo culture etc. Somatic embryogenesis is the developmental process by which theoretically any somatic cell develops into a zygote like structure that finally forms a plant [16, 17] and it is significantly important for in vitro mass propagation, germplasm conservation and genetic improvement of higher plants.

Very limited reports are available on the in vitro regeneration of S. virginianum. Using nodal and shoot tip segments, micropropagation technique has been established in S. virginianum [18]. Direct shoot organogenesis from shoot tip and leaf segment was achieved by Pawar [19].  Somatic embryogenesis was successfully achieved from cotyledon and leaf explants in S. surattense [20]. Callus induction and shoot organogenesis from floral bud was studied [21]. Due to its over exploitation for high medicinal use, this plant is becoming endangered [22], hence there is a need for ex-situ conservation through tissue culture technique.  To mitigate the natural and social problems related to S. virginianum, an attempt is made in the present investigation by standardizing reliable protocol for mass and rapid multiplication of this rare and endangered medicinal plant via somatic embryogenesis. The present study is focused on the effect of growth regulators that enhance somatic embryogenesis followed by shoot initiation in S. virginianum for mass propagation.

Morphologically healthy fruits of S. virginianum were collected from Haripur, Sangli (160 50’ 52.2” N 740 32’ 05.8” E) (Maharashtra, India). The plantlets were maintained in the botanical garden of Department of Botany, Shivaji University, Kolhapur. The plant was identified and authenticated by Dr. M. M. Lekhak and the herbarium sheets were prepared and submitted to Herbarium deposition section of Department of Botany, Shivaji University Kolhapur with ‘SUK acronym’, after which accession number SUK (DSP 01) was provided.

In vitro seed germination and induction of somatic embryogenesis:

All the fruits were washed with detergent Tween-20, followed by tap water twice in laboratory and surface sterilized with 0.1% HgCl2 for 4 min.  They were then washed thrice by sterilized distilled water for 1 min each and then treated with 70% ethanol for 30 sec.  Again repeated 3 washes of sterilized distilled water for 1 min each were given. Surface sterilization was carried out in a laminar air flow. Then the fruits were blotted dry, then cut and seeds dissected out. The seeds were inoculated on to ½ strength MS medium [23] containing 3% sucrose and 0.8% Agar agar aseptically. The seeds germinated within a period of 15-20 days.

The stem from germinated seedling was used as explant and it was cultured on MS medium supplemented with BAP (1 mg L-1) for callus induction. The process of callus induction was done till the 7th week after inoculation of explant.

For induction of somatic embryogenesis the callus was transferred onto MS medium supplemented with various plant growth regulators (2,4-D, BAP,  IAA, IBA and NAA) either singly or in combination (Table 1). Once the nodular embryos were formed, for further development of embryos they were transferred onto the same hormone concentration or hormone free MS medium. Experiment was repeated thrice and twenty replicates were used for each experimental set.  After inoculation culture tubes were transferred to culture room under a 16/8 h (light/dark) photoperiod, temperature 25±2°C and maximum humidity (80%) was adjusted with air conditioner. The observations were recorded after nine weeks and statistical analysis was done using Microsoft excel statistical methods. The values were represented as mean ±SE.

The important step in plant tissue culture was surface sterilization of explants. Minimum contamination and higher survival rate were achieved in 0.1% HgCl2. However, the optimum time period of exposure of seeds to HgCl2 was 4 min. Surface sterilized explant was inoculated on ½ strength MS medium. Within 15 to 20 days seeds started germinating. After seed germination the elongated shoots were inoculated on different concentrations of BAP (0.5, 0.75, and 1.0 mg L-1) for multiplication. Maximum growth was achieved on 0.75mg/l BAP. BAP proved more effective for shoot regeneration than Kn for shoot multiplication of S. virginianum [24]. Ramar and Nandagopalan [25] confirmed that Solanum surattense possess low amount of endogenous hormones hence it requires high amount of exogenous hormones for plant regeneration. The stems from germinated seedlings were inoculated on 1 mgL-1BAP which resulted in callus induction. The explants were slightly swollen and formed protuberance along whole length of the explants, which upon continuous culture gave rise to pale greenish callus within 3 to 4 weeks. The induced callus was sub-cultured on various concentrations and combinations of BAP, IAA, IBA, 2,4- D and NAA used singly or in combination (Table 1).  Proliferative callus was converted into high nodular embryogenic callus in all the combinations tested. Combinations of BAP + IAA and BAP + IBA were further used for subculturing, proliferative callus was seen to rapidly convert into embryogenic callus (Figure 1a). In medium with single hormone (NAA or 2,4-D) it was seen that the proliferative callus subcultured on hormone free medium (devoid of NAA or 2,4-D) showed somatic embryogenesis (Figures 1b,1c). Thus, to initiate proliferative calli BAP, IAA, IBA, NAA and 2,4-D were used alone or in combination. For achieving somatic embryogenesis, BAP + IAA, BAP + IBA combinations were used for at the time of subculturing. All the combinations of growth regulators were more or less responsible for callus proliferation (Figures. 1b, 1c). The embryogenic calli were composed of small spherical or globular nodules. Callus formation process needed 4-6 weeks for best proliferative callus. The embryogenesis was seen in callus in the 7th week in some combinations which extended to 9th week where somatic embryogenesis was observed in all the hormones tested. Dark conditions favored induction of somatic embryogenesis. In all the combinations of BAP+IAA studied, maximum percent response for embryogenesis (90%) was recorded in 2 mg/l BAP in combination with 5 mg/l IAA. Cytokinins, such as BAP are reported to inhibit the embryogenic potential in carrot cultures but a combination of BAP with IAA induced embryogenesis in Podophyllum hexandrum [26]. 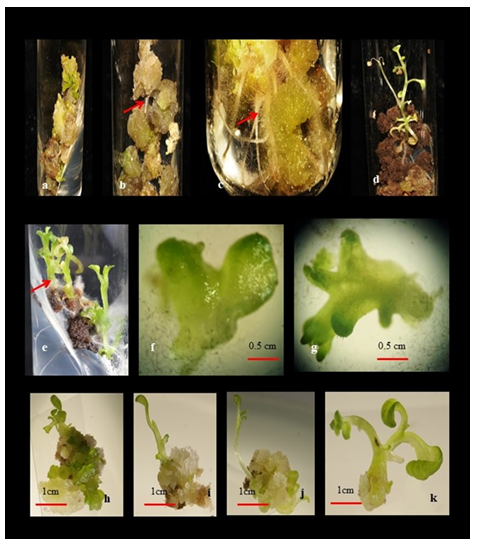 Embryogenic callus induction was also tested with 2,4-D and NAA alone wherein whitish callii were observed. Maximum growth was recorded on 5 mg/l for both. Ramaswamy [20] showed that leaf explants of Solanum surattense had maximum somatic embryogenesis and high frequency of somatic embryo induction when MS medium was supplemented with 4 mg/l NAA and 0.5 mg/l BAP. Somatic embryogenesis was reported on the medium containing NAA alone in Solanum melongena [27].

In present study, heart-shaped somatic embryos were observed which further progressed towards late-heart-shaped or torpedo-shaped embryos as they attained well-developed and mature cotyledons (Figures. 1f-k). Sharma and Millam [30] in case of Solanum tuberosum, observed two cotyledonary stages onto the medium supplemented with 5 µM 2,4-D. A balance in endogenous and exogenous auxin is essential for somatic embryogenesis. In carrot cultures auxin containing cultures reportedly producedmore ethylene than auxin free cultures [26]. High ethylene content enhances more activity of cellulase or pectinase or both which causes the breakdown of clumps before polarity is established in proembryos for further development. Thus 2,4-D supports tissue multiplication but opposes maturity of embryos [26]. Well-developed shoots with roots were obtained after somatic embryogenesis (Figures. 1e and f), which were further dissected out and subcultured singly on MS basal medium. Cytokinins had significant effects on somatic embryogenesis and high concentration (1 mg L-1) was more effective. Similar results were obtained by Singh and Chaturvedi [12] who reported that the effects of cytokinins on somatic embryogenesis were significant and mandatory for the differentiation of somatic embryos.

In conclusion, the present study showed that the callus induction and somatic embryogenesis were strongly affected by plant growth regulators and culture conditions. The medium containing both auxin and cytokinin at any concentration is capable of inducing the formation of somatic embryogenesis but differences are based on the type and concentration of plant growth regulators and light conditions [31].

Various potting mixtures, red soil, compost, sand coco peat (either used solely or combined) were tried for acclimatization of plants derived through somatic embryogenesis (Table 2) Well-developed plantlets were potted in plantation bags with different potting mixtures and survival percentage was calculated. All the plantation bags were kept in shade in a greenhouse in the initial days (4 weeks) to maintain humidity. Highest survival percentage (98±1.24%) was observed on red soil : sand (1:1) proportion, while lowest survival percentage (34±4.33%) was observed on Compost alone. These hardened plants were maintained in glass house for three months and then transferred to field.

Note: Readings were taken 5 weeks after planting. Experiment had 20 replicates and experiment was repeated at least thrice.

Table 2:  Effect of different potting mixtures on hardening and acclimatization of in vitro raised  plantlets of Solanum virginianum.

For the successful multiplication of plants, micropropagation, rooting and acclimatization are important factors. In the present investigation 98 % survival rate was observed on Red soil : Sand (1:1) proportion and similar type of results recorded by Rao [16] where tomato varieties were successfully survived on sand : soil (1:1) proportion. Large scale propagation of S. virginianum may be achieved by crossing the barriers like natural seed germination and seasonal restrictions.