Noninvasive method for early detection of human cancers is promising way to provide more quality health service to the population. The serum and stool of colorectal cancer patients often harbor increased free DNA levels, which can potentially be used for cancer detection. Because SFRP2 (secreted frizzled related protein 2) is considered a Wnt inhibitor whose CpGs were frequently hypermethylated in several human cancers, we investigated the frequency of aberrant SFRP2 promoter methylation in primary tumors and serum or stool samples of colorectal cancer patients by MS-PCR. We detected methylation of SFRP2 in 111 of 117 (94.9%) paraffin-embedded colorectal cancer tissues. Fifty-nine of the 68 (86.8%) available serum samples from these cases carried detectable amounts of the methylated SFRP2 promoter. Sixty-one of 68 (89.7%) available stool samples from the same cases carried positive methylation in the promoter region of SFRP2 gene. In contrast, no methylated SFRP2 promoter DNA was detected in serum and stool samples from 60 healthy controls. Only 2 cases of 68 healthy controls showed methylated SFRP2 promoter DNA in their colorectal tissue. But high frequency of methylated SFRP2 gene promoter has no correlation with the clinic-pathologic features. We concluded that SFRP2 methylation analysis appeared to be a noninvasive tumor marker in serum and/or stool DNA

Colorectal cancer is an important disease with a large morbidity and mortality and increasing health care costs as multi-modality therapy becomes more widespread and new drugs appear. But many of the patients who undergo curative surgical resection will ultimately die of recurrent colorectal cancer, depending mainly on the initial stage of the disease. Thus, earlier detection of colorectal cancer would improve the efficacy of treatment and management of this disease. Therefore, it is vitally important to identify and develop reliable diagnostic markers of early stage colorectal cancer. Several reports show that tumors can release DNA into the circulation or even into the stool, and these DNAs can be often detectable in the serum and stool of cancer patients. The serum of cancer patients contains, on average, 4~40 times more free DNA, compared with normal individual [1].

Aberrant WNT pathway signaling is an early progression event in approximately 90% of CRCs and occurs through mutations mainly of APC and, less often, of CTNNB1 (encoding beta-catenin). These mutations allow ligand independent WNT signaling that culminates in abnormal accumulation of free beta-catenin in the nucleus [2-4]. Secreted frizzled-related proteins (SFRPs) possess a domain similar to one in the WNT-receptor frizzled proteins and can inhibit WNT receptor binding to downregulate pathway signaling during development [5]. Recently, gene silencing of SFRPs, which consist of 5 members (SFRP1-5), by the hypermethylation of their promoter was identified in CRCs and other malignancies [6-8]. Especially, SFRP2 methylation was detected in a high frequency of over 60% of CRCs, including a Lynch syndrome, which suggests that SFRP2 methylation might potentially be useful as a promising sensitive screening marker for the stool-based detection of CRCs and premalignant lesions. We, therefore, investigated macrodissected samples of 117 formalin-fixed and paraffin-embedded colorectal tumor tissues and 68 serum and stool samples from available cases. We also investigated 60 healthy controls in the same way. We proved that serum and stool DNA could be promising marker to detect colorectal cancer in individuals.

Tissue specimens from 117 CRCs were obtained from patients with colorectal cancer who had undergone curative surgery at Pyongyang medical school’s hospital, KIM IL SUNG University, Pyongyang, DPRK between 2008 and 2010. Obtained tissue specimens were immediately formalin-fixed and stored as paraffin-embedded until use. Histological examination was performed by the pathology department to determine cancer type and their stage. Among the patients, 68 cases were available to provide serum and stool samples. Sixty healthy volunteers provided their tissue, stool and serum samples.

DNA was extracted from paraffin-embedded archival materials. DNA concentration was measured using a spectrophotometer (Thermo Fisher Scientific Inc., Wilmington, DE) at 260 nm absorbance. Serum samples were available only from 68 cases and they were collected in tubes with K­+EDTA. According to the manufacturer’s instructions, our samples were digested with protease K and DNAs were extracted from 200μl protease K digested samples, following the manufacturer’s protocol. Stool DNA was extracted by phenol-chloroforum-isoamyl alcohol method. Bisulfite modification was carried out using a AxyPrep Multisource Genomic DNA Miniprep Kit.

The modified DNA was subjected to MS-PCR using specific primers for methylated sequences (forward 5`-GGTCGGAGTTTTTCGGAGTTGCGC -3` and reverse 5`- CCGCTCTCTTCGCTAAATACGACTCG-3`) and unmethylated sequences (forward 5`- TTTTGGGTTGGAGTTTTTTGGAGTTGTGT-3` and reverse 5`-AACCCACTCTCTTCACTAAATACAACTCA-3`), which generate PCR products of 138 and 145 bp, respectively. For PCR, 2 μl of bisulfite-modified DNA was amplified in a total volume of 25 μl containing 1 × PCR buffer (with MgCl2), 12.5 pmol of each primer, 160 μM DNTPs and 0.5 U of Hot-Goldstar Taq-polymerase. PCR conditions were 95°C for 5 min, 35 cycles of 95°C for 1min, annealing with 60°C for 1min and 72°C for 1min followed by a final extension step at 72°C for 10 min. Methylated standard DNA was used as a positive control for methylation, and placenta DNA was used as a negative control. PCR products were electrophoresed on polyacrylamide gels and visualized by silver staining.

One-way analysis, ANOVA with Bonferroni test was used for group comparison. For the statistical analysis, a two-sided value of p<0.05 was considered to indicate statistical significance. Data were analyzed using the SPSS-software 11.5 for windows.

Methylated SFRP2 promoter was detected in 111 (94.9%) of 117 tumor tissue samples. SFRP2 methylation rate in serum and stool samples are 59 out of 68 (86.8%) and 61 out of 68 (89.7%), respectively. No methylation was detected in serum or stool DNA from 60 healthy controls and only 2 colorectal tissue from healthy controls contained methylated SFRP2 DNA. Detailed information is shown in the Table 1. Figure.1 shows MS-PCR products on polyacrylamide gel electrophoresis.

In our group of colorectal carcinomas, there was no association between SFRP2 promoter methylation and age, gender, histopathological type, tumor stage, grade of differentiation. Detailed information is shown in Table 2. 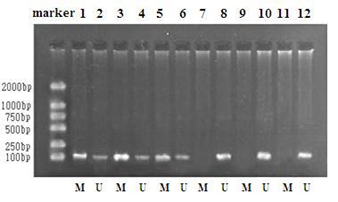 Our study clearly demonstrates the biological significance of methylation in the region of the SFRP2 promoter in specimens obtained from the colon and rectum. Aberrant methylation in gene promoters has been established as a key mechanism for the inactivation of tumor suppressor genes in human malignancies, including CRCs. Clinically, the identification of genes that are prone to abnormal methylation and that consequently become downregulated is of critical importance, since this is considered to provide a good source of novel biomarkers. The family of SFRP genes, functionally acting as the WNT signaling inhibitors, was recently shown to be a common target of promoter hypermethylation in numerous tumor entities [9-12]. Indeed, we have demonstrated aberrant methylation of the SFRP2 promoter region by analyzing tissue, serum or stool DNA of colorectal cancer patients. This will contribute to the early detection of colorectal cancer in a more quality way.