Systemic Inflammation: A Risk Factor for Osteoporosis in Pre- and Post-menopausal Women

Background: Inflammatory markers like Interleukin 6 (IL-6), tumor necrosis factor α (TNF α) and high sensitivity C-reactive protein (hs CRP), play an important role in the pathogenesis of osteoporosis. The present study aims to investigate the relationship between markers of inflammation, BMD and to correlate these markers with estradiol levels in pre- and post-menopausal women.

Methods: A total of 169 subjects with low BMD along with 170 age matched controls were studied. Serum concentrations of hs CRP, IL-6, TNF α and estradiol levels were measured by ELISA method.

Conclusion: Inflammation is associated with low bone mass and therefore an independent risk factor for osteoporosis.

Osteoporosis is characterized by the loss of bone mass and deterioration of bone microarchitecture with a resulting increase in bone fragility and, therefore, susceptibility to fractures [1]. Currently Osteoporosis is attributed to various endocrine, metabolic and environmental factors. Emerging clinical and molecular evidence suggests that inflammation also exerts significant influence on bone turnover, inducing osteoporosis. Numerous pro-inflammatory cytokines have been implicated in the regulation of osteoblast and osteoclasts and an activated immune profile has been hypothesized as an important risk factor in the occurrence of the disorder [2].

During the past decade, considerable evidence has accumulated that estrogen deficiency dramatically alters the dependency of bone cells on several cytokines, including interleukin 6 (IL-6), interleukin -1(IL-1), and tumor necrosis factor α (TNFα) for the role of cytokines in bone loss due to estrogen deficiency [3-5]. Although these data provide strong evidence for the involvement of cytokines due to estrogen deficiency most of the results have been derived from in vitro and animal studies. However, evidence that these inflammatory cytokines play a similar role in human studies is limited. Preliminary studies on cytokines and bone mineral density [6-9] or bone loss [10, 11] in post-menopausal women have shown inconsistent and contradictory results.

Further the associations between circulating inflammatory markers, estradiol levels and BMD   in pre-menopausal women have not been reported. Therefore, the aim of this study was to estimate the serum bone specific alkaline phosphate (ALP, bone formation marker), bone specific tartrate resistant acid phosphatase (TRAP, bone resorption marker) and to determine the association between serum hsCRP ,IL-6 ,TNF α (markers of inflammation)  and bone mineral density as well as estradiol levels  in pre and post-menopausal women.

A total of 169 osteoporotic Indian women from a high socio- economic group attending the bone health program of Vijaya Diagnostic Centre, Himayat Nagar, Hyderabad were included in the study. Subjects affected by disorders of mineral metabolism or by conditions known to cause secondary osteoporosis, such as hyperthyroidism, cortisol excess, malabsorption syndromes and malignancies were excluded. Likewise, individuals on drugs known to affect calcium metabolism, including corticosteroids, Thyroid hormones, anticonvulsants, diuretics as well as bisphosphonates, Fluorides were excluded from the study.

70 premenopausal women (mean age 40.7 ± 5.1 years; range 30 -45 years) having regular cycles and T score ≤ -2.5 at spine were considered as osteoporotic. The women were non pregnant, non-lactating at the time of sample collection. Postmenopausal women with cessation of menses for at least one year (mean age 56.6 ± 7.8; range 50-70 years) and T score ≤ -2.5 at spine were taken as osteoporotic individuals for the study. Individuals were excluded if they had undergone hysterectomy prior to natural menopause. None of the women were on estrogen replacement therapy. None of the subjects were alcoholic nor smokers. All the subjects were interviewed in accordance with a structured questionnaire in order to collect clinical data, including a history of fracture which was verified by medical records. Osteoporotic fractures included clinically recognized fractures of the hip, spine, or distal fore arm which resulted from minimal or moderate trauma. Among the 169 osteoporotic individuals none of them had fractures at the time of sample collection. Written informed consent was obtained from all the individuals and the study was approved by the ethical committee of the Institute. Standing height and weight were recorded. Physical built was expressed as body mass index, calculated as the weight (in kilograms) divided by the square of the height (in meters).

Bone mineral density was obtained from anterior –posterior lumbar spine (L2-L4) scanning with Dual energy X-ray absorptiometry (Lunar GE medical systems, Prodigy 6.80, DF+10243). Subjects were categorized according to the WHO definition, osteopenia was diagnosed at –2.5< T -score <–1.0 SD, and osteoporosis was diagnosed at T-score ≤ –2.5 SD at any site. T-score ≤ 1 SD is considered normal. All the individuals were analyzed by the same DEXA machine to avoid minor variations if any.

The results are expressed as mean ± SD. Differences in the parameters between the Pre- and post-menopausal women were compared using Students t-test. Pearson’s correlation co-efficient was used to find the strength of the association between serum IL-6, TNF α and hs CRP. Relationship between estradiol levels and IL-6, TNF α and hs CRP were performed by Pearson correlation. All statistical analysis was performed with SPSS statistical software (version 15), with p value less than 0.05 considered statistically significant.

Table 2: Biochemical and inflammatory markers of the study subjects.

The results are given as mean ± SD, p value <0.05 is considered significant

Table 3: Comparison of inflammatory markers according to menopausal status.

According to WHO classification when the subjects were categorized into normal, osteopenia and osteoporotic, we found that the serum hs CRP (F=29.90, p=0.000) IL-6 (F=16.30,p=0.000) and, TNF α (F=3.754, p=0.05) levels were significantly high in osteoporotic subjects compared to controls. The significant decrease in bone mineral density and increase in the levels of inflammatory markers in post- menopausal osteoporotic women indicate a rapid bone loss than pre- menopausal osteoporotic women (Table 2). Osteopenic subjects had also higher concentrations of inflammatory markers hs CRP (F= 5.073, p=0.026) and IL-6 (F=6.604, p=0.016) when compared to controls but TNF α levels did not reach statistical significance (F=0.390, p=0.533) in these subjects. Serum hs CRP (a), IL-6 (b) and TNF α (c) concentrations among controls, osteopenics and osteoporotic subjects are shown in figure 1. Data reported as estimated mean ± S.E values in all the subjects. 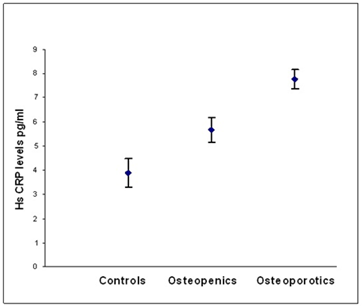 Figure 1a: Relationship between hs CRP levels and BMD status. 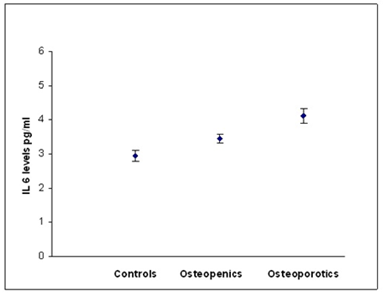 Figure 1b: Relationship between IL-6 and BMD status. 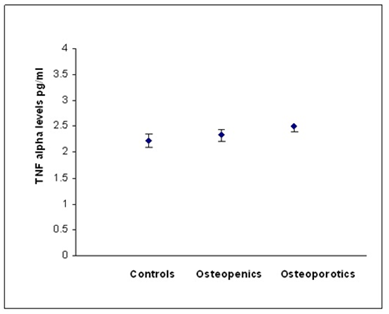 Emerging clinical and molecular evidence suggests that factors involved in inflammation are linked with those critical for bone physiology and remodeling, supporting the theory that inflammation significantly contributes to the etiopathogenesis of osteoporosis [15, 16]. Decline in ovarian function with menopause is associated with spontaneous increase in pro inflammatory cytokines. Experimental and clinical studies strongly support a link between the increased state of pro inflammatory cytokine activity and postmenopausal bone loss. Cytokines in the microenvironment of the bone, such as interleukins 1 and 6 (IL-1 and IL-6), tumor necrosis factor (TNF), interferon (IFN), affect the bone-remodeling process by regulating the differentiation as well as the activity of osteoblasts and osteoclasts [17-20]. Over the past decades, numerous reports have been published demonstrating that natural or surgical menopause increases blood, bone marrow, and monocytic levels of IL-1, IL-6, TNF, and the related factors IL-1R [4, 21] In spite of these observations, controversy persists concerning the specific contribution of each of these factors to bone loss. Recent data from a number of laboratories have indicated a potential critical role for certain pro inflammatory cytokines, both in the normal bone remodeling process and in the pathogenesis of peri menopausal and late-life osteoporosis [21, 22].

Results of the present study reveal that inflammation is involved in bone metabolism. However, the mechanisms linking bone metabolism are not clear. Accelerated bone loss due to menopause –induced estrogen deficiency is the major cause of postmenopausal osteoporosis [30] where inflammatory processes are known to up-regulate many cytokines, such as IL-1, IL-6 and TNF-α, which strongly stimulate CRP production from the liver as well as induce bone resorption [31, 32]. Increased bone resorption may result in increased bone turnover and decreased BMD [33-36]. But the mechanism involved in pre-menopausal women is not clear. The strong family history of osteoporosis, especially in the premenopausal women, may provide further support for current theories of a genetic predisposition to osteoporosis.

Our observations clearly indicate that elevated levels of serum hs CRP, IL-6 and TNF α concentrations in both pre and postmenopausal women are associated with low BMD. Thus, inflammation alone could be an important risk factor in the occurrence of the disease and targeted anti-inflammatory therapy may play a potential role in the prevention of rapid bone loss.

All the authors declare no conflict of interest.

The authors are thankful to Indian Council of Medical Research (ICMR), New Delhi for financial support.