The Effect of Conservative Periodontal Therapy at Patients with Systemic Diseases

Results: Outcome results in delayed treatment in diabetic patients with oral cavity injuries. The minimum amount of bacterial plaque in patients with gastrointestinal diseases is the most typical element of this category. The appearance of gingival hypertrophy in patients with hypertension treated with calcium-blockers and the faintest gingivitis during treatment of nephropathy patients are the typical features found in the relevant patient category.

Patient's vulnerability to combinations of diseases that follow and encourage each other was higher in the cardiac and diabetic relationship than in nephropathy and diabetes patients. Cardiac patients, if we talk about the healing process, in the probability values, reacted more slowly than diabetic patients. This element should be further followed by further analysis of the risk factors of these categories versus the occurrence of periodontal diseases.

Periodontal therapy aims to maintain the balance of destructive factors and formative and remodeling factors in periodontal structures. Therapy aims to maintain the level of periodontal structures up to the stage where the destruction has resulted, as the consequence of the bacterial flora and the systemic effect of the disease by the suffering organism [1, 2]. Conservative periodontal therapy, regardless of the protocols defined in the work protocol, is expressed in clinical outcomes ranging from systemic diseases, gravity, and patient control to them. These results are measurable and clinically controllable, even as evaluators of various stages of agitation or disease improvement [3-7]. Periodontal disease diagnosis is usually based on clinical data and radiographic estimates, while gingiva assessment in the acute phase can be done by clinical examination, including gingival sulcus depth recording and gingival bleeding [8-12].

The purpose of this study is to evaluate the clinical outcomes of non-surgical periodontal therapy specifically for psychiatric, diabetic, nephropathic and gastrointestinal patients. The clinical presentation of the diseases that these patients experience is included in the first part of the study, followed by the selection of some of the patient typologies of the above classification, followed by a documented parental periodontal evaluation and 1 week of non-surgical periodontal posttraumatic patient. In the group of systemic diseases selected cardiovascular diseases, diabetes, hypertonic and gastrointestinal diseases, always stating in the fact that these diseases have a typical clinical appearance of t oral cavity, expressed depending on the duration of the disease, so for as long as the systemic effects of of the disease have appeared in the oral cavity [1]. These selected diseases, specifically have the clinical appearance of the oral cavity and despite the oral protocol of oral therapy affect the healing of the wounds in the mouth, and the duration of full periodontal healing. Periodontal therapy for these patients, specifically according to certain diseases, has certain protocols and stages of application for achieving the ultimate goal of protecting the level of periodontal tissue destruction [13-15].

After recording the history of each of the patients and it was found that the patients were in their psychiatric, diabetic, nephropathic and gastrointestinal disorder under treatment for specific diseases, in the attendance of the parodontologist, it was proceeded with a clinical examination of the oral cavity. Oral examination was performed on soft tissue and soft tissues of the oral mucous membrane, always respecting the air drying procedure and then checking free eye differences in oral mucosal relief. Telling the patient, the purpose of the study and the ongoing procedure, his consensus was required. The study was conducted in a total of 311 patients, out of which 206 were ill patients involved in the assessment, out of which 80 were cardiac patients, 76 diabetic patients, 43 nephropathic patients, 7 gastrointestinal patients included in our study after completing inclusion criteria. Patients included in the study are divided by age, sex and socio-health status. Each patient involved in the study is well-informed, and then agreed with full consensus to become part of the study, and then proceed with the established protocol.

After collecting the data in the baseline table of excellence, they were processed for purpose of displaying the results of the study according to the tables below.

Table 1: Number and percentage of sick and healthy patients are presented in the table. 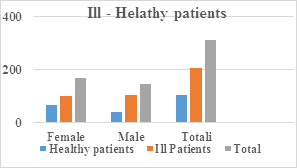 Figure 1: The graph shows numerically and in percentage the healthier and healthier patients. 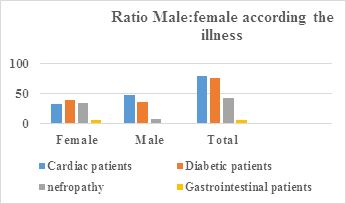 Figure 2: Shows the distribution of patients in male ratio: female, according to cardiac, diabetes, nephropathic and gastrointestinal disorders.

Table 4: Intercourse between Nephropathy and Diabetes. 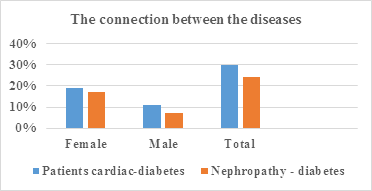 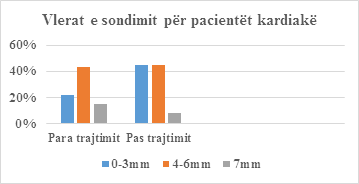 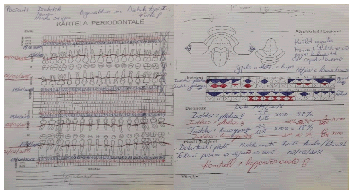 Figure 5: Female diabetic patient, age 54, diagnosed with Type I diabetes for 7 years. This patient has recorded periodontal diagrams before and 1 week after the last period of periodontal treatment. 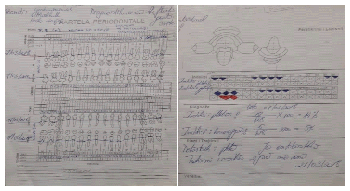 Figure 6: Patient male of 40 years with gastrointestinal reflux problems, diagnosed for 3 years. The photo is the first sheet of periodontal card - the probe diagram. 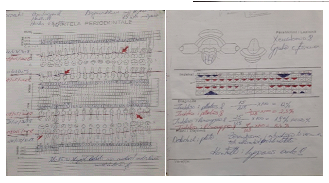 Figure 7: Patient suffering from hypertension, diagnosed with this disease for 15 years. The picture shows the probe diagram before and after treatment.

Periodontal disease and arteriosclerosis tend to increase their appearance over time. Disease caused by vascular changes could increase the patient's sensitivity to the appearance of periodontal diseases. On the other hand, periodontal diseases also have a significant effect on the appearance of atherosclerosis through the mechanisms of activation of macrophages. Hypertension is another disease that has an effect on the appearance of periodontal diseases, depending on the medications to which these patients are treated [16-19]. Calcium channel blocker medications give inflammatory gingivitis hypertrophy that is stimulating to appear further and agitating [20-25]. From recent literature studies, it is logical that the level of cholesterol in the blood is higher than that in patients suffering from atherosclerosis [25-32]. The level of cholesterol in the blood has a direct correlation with increased depth of pocket in patients with atherosclerosis [33-35]. Again, blood cholesterol levels are associated with increased depth of the pockets even in patients in the control group.

If we are talking about diabetics, high-grade glucose in saliva and gingival fluid is present in the disease pack. This high glucose level stems from the presence of increased glucose levels in the blood, or by non-control of this level due to systemic disease. Having a high amount of glucose in the saliva, the possibility of creating bacterial plaque in the marginal gingival is added. Diabetic patients have oral cavity pH in the direction of more acid than patients who do not suffer from these systemic diseases. Diabetic patients always notice delays in wound healing. This delay is explained by the slow motion of neutrophils to the inflammatory areas, as it is known that the first stage of healing is the cleansing phase of the neutrophils area that perform the phagocytosis of any unwanted element in the wound.

Recent studies point out that patients who are suffering from Type I diabetes mellitus are more susceptible to periodontal and lumbar disease, and that such problems increase with age and increase in age [37].

Patients with kidney problems are responsible for debiting the processes performed by these organs. Knowing that they filter the unnecessary elements of the blood, are understood in kidney dysfunction, these elements will tend to be deposited in the host tissues.Patients with gastrointestinal problems are related to the treatment of periodontal diseases at the point of having caution when prescribing certain medications, as their absorption is affected by medicines taken for the treatment of gastrointestinal diseases, under the control of the acidic pH of the stomach. Gastrointestinal reflux affects the emptying of gastric contents through the oral cavity. This content, being in acid form, stomach acid, sharpens the enamel surface significantly reflecting the dentin underneath it. This phenomenon is well-known with the emblematic description. This phenomenon was also evident in the patients involved in the study. Gastric content affects not only strong structures in the oral cavity, but also soft structures, mucosal tissues, which again suffer the acidification of the gastric contents.

Regardless of the choice of patients, it was found that the vulnerability of individuals, in general, to cardiac diseases, diabetes, kidney disease, gender segregation, was the same. Patient's vulnerability to combinations of diseases that follow and encourage each other was higher in the cardiac and diabetic relationship than in nephropathy and diabetes patients. Cardiac patients, if we talk about the healing process, in the probability values, reacted more slowly than diabetic patients. This element should be further followed by further analysis of the risk factors of these categories versus the occurrence of periodontal diseases. The hemorrhage index expressed significant reductions during the healing process, in descending order, the highest changes in diabetic patients, followed in gastrointestinal, nephropathic patients and the last were cardiac patients. Systemic diseases are directly related to the periodontal status of patients affected by them. This connection is secondary because, as the systemic diseases cause periodontal disease, the latter path is also worthwhile, since periodontal diseases also cause systemic diseases, which even endanger the patient's life.