The Primary Outcome of a Prospective Study: Nucleoplasty with Endoscopic Microdiscectomy

Purpose: Evaluation of combined endoscopic microdiscectomy with Radiofreqent ablation Nucleoplasty where it is predicted to show more satisfying short-term outcome.

Study Design: A consecutive cohort of 23 patients with lumbar discogenic back pain who underwent Nucleoplasty with endoscopic microdiscectomy. Outcome measurements evaluating pain intensity and functional disability were completed preoperatively, at 1 months, at 6 months, and at the 1-year follow-up visit.

Methods: All cases (N=23) following up with confirmed diagnosis of contained lumber discogenic back pain, who failed conservative treatment and fulfilled the criteria for surgical intervention, then underwent endoscopic microdiscectomy with nucleoplasty, and followed up by regular clinic visits for a period of one year maximum. Primary outcome variables that are going to be used in the research is Visual analogue scale (out of 10) and the Oswestry disability index (out of 100).

Conclusion: In this minimal invasive approach, Nucleoplasty with Endoscopic Microdiscectomy, it showed promising short-term outcomes with less post-operative pain, hospital stay, minimal blood loss and no reported post-operative complication which can be an alternative option to the standard open Microdiscectomy.

Lumbar disc herniation can cause central canal stenosis or spinal nerve root compression. The local inflammatory response and the anatomical features of the herniated disc and spinal canal determine the resultant clinical syndrome which may include low back pain, and sciatica with or without neurological deficit [1].  In nations like the United States, its prevalence is between 8% and 57%. According to the estimate provided by the experts, nearly 29% of individuals encounter a low back pain that could disable the individual at a certain stage of his or her life [2]     Mainstay of treatment for patients with radicular pain due to lumbar disc herniation involves open lumbar discectomy, and has provided excellent outcome in over six decades [3, 4].

Nucleoplasty (percutaneous lumbar disc decompression) is a minimally invasive procedure that utilizes radiofrequency energy as a treatment for symptomatic lumbar disc herniation, against open microdiscectomy, which would be the mainstay treatment modality. The literature reports a favorable outcome in up to 77% of patients at 6 months [5]. Minimal invasive approach for surgical treatment of discogenic back pain has increased in popularity in the recent years and was regarded as a feasible alternative option to the standard open microdiscectomy. According to one study, Patients were randomized in two groups receiving Either MAMD (minimal access microdiscectomy) or SOMD (standard open microdiscectomy). Physical and mental health and pain relief were assessed (ODI, SF-36 questionnaire, VAS leg and back pain). Results Of the 60 initial patients (SOMD: 30 pts, MAMD: 30 pts), 38 were available for long-term follow-up. Mean follow-up time was 33 months. Long-term follow-up revealed significant postoperative pain relief in both groups. Good to excellent results concerning physical and mental health and pain relief were achieved in both groups. Significantly less peridural scar tissue formation was observed in the MAMD patients, but without clinical impact. In conclusion, MAMD is a feasible alternative to the standard open approach. Both groups show significant and long-lasting pain relief and good to excellent results regarding health-related quality of life [6]. In a prospective outcome predictor study, 87 patients who underwent percutaneous endoscopic lumbar discectomy and thermal annuloplasty (PELDTA) for discogenic low back pain (DLBP). Clinical outcomes were assessed using the visual analog scale (VAS), the Oswestry disability index (ODI), and the modified MacNab criteria. The univariate and multivariate analyses were performed to evaluate the outcome predictors. The VAS and ODI scores at postoperative 6 months and 2 years were significantly improved (p< 0.001). Based on the modified MacNab criteria, the global outcomes were excellent in 39 out of 79 patients (49.4%), good in 17 patients (21.5%), fair in 10 patients (12.7%), and poor in 13 patients (16.5%). Therefore, the percentage of symptomatic improvement was 83.5% and the success rate (excellent or good) was 70.9%. In the univariate and multivariate analyses, the presence of concurrent disc herniation with DLBP was the most significant predictor (OR=3.207, 95% CI 1.02–10.06, p=0.046). As a Conclusions, PELDTA may be effective for patients with chronic DLBP in selected cases. Central disc herniation causing DLBP was the most important predictor for clinical success [7].

A consecutive cohort of 23 patients with lumbar discogenic back pain who underwent Nucloplasty with endoscopic microdiscectomy between December/13/   2014 to July/6/2016 were included in this prospective study. Patients were operated by the one surgeon, who used the same surgical technique at the same institution for the study period. All cases (N=23) following up at the orthopedic department with confirmed diagnosis of contained lumber discogenic back pain, who failed conservative treatment and fulfilled the criteria for surgical intervention, then underwent endoscopic microdiscectomy with Nucleoplasty, and followed up by regular clinic visits for a period of one year maximum. Questionnaires with outcome measurements evaluating pain intensity and functional disability were completed preoperatively, at 1 months, at 6 months, and at the 1-year follow-up visit or during telephone interviews by the independent observer. At each follow-up, the pain intensity of the low back pain was measured using a visual analog scale (VAS, 0–10 points), and the functional status was assessed using the Oswestry disability index (ODI).  All patients are instructed to fill VAS and ODI survey through every visit (Preoperational, 1 month post operation, 6 months post-operation, and 1 year post-operation), where they were instructed and assisted by healthcare professionals throughout the process. Data was collected through OAISIS electronic healthcare system where all of the information were documented and acquired by co-investigators and not the main surgeon himself. No exclusion based on BMI or preoperative history of trauma was done. All patients were contacted individually via telephone and e-mail for conformation and accurate input of data and outcome subjective satisfaction of the operation. Inclusive criteria include Intractable chronic low back pain without improvement after conservative treatment for 6 months, Central or posterolateral (paracentral) contained disc herniation (Grade I and II) on magnetic resonance imaging, No history of previous back surgery, Age range from 20 to 75 years old, Level of surgery range between L3 to S1. Exclusive criteria include Age below 20 and above 75, Lateral recess stenosis, sequestrated disc, Fractures, tumors, or infections, Extruded or sequestrated herniations on magnetic resonance imaging, Non lumber disc herniation, Concurrent back pain due to other pathologies, Congenital spinal anomalies, Cases with Oswestery more than 70 , or less than 40. Primary outcome variables that are going to be used in the research is Visual analogue scale (out of 10), the Oswestry disability index (out of 100), and outcome subjective satisfaction. Secondary outcome variables that are going to be used in the research are length of operation, length of hospital stay, blood loss, postoperative infections, dural tear, reoperation, and nerve root injury. Other variables are age, gender, level of surgery, patient occupation, smoking, comorbidities, alcohol intake, history of trauma, use of steroids, sitting intolerance, and body mass index.

on Jackson's table prone position , after confirmation of the level with C-arm, standard prep and drape was done, using one C-Arm the fluoroscope was taken lateral and the arm were moved to oblique position until the scotch view appear (Figure 1), then a guide needle passed vertically toward the middle third of the disc ( Kambin Triangle, Figure 2 and 5 ) and a dilator passed though 8 mm incision with the portal, the positioned was checked in two planned AP and Lateral , then the endoscope thorough the portal passed until it reach the lateral border of the pedicle, using the Camera to protect the nerve root and the dura, a sharp knife penetrate the disc then using scissors and Pituitary the disc were taken until 1/3 of the disc were out (Figure 3 and 6), a radiofrequent ablation then take place (Figure 4), local xylocain 2% with depomedrole, the skin closed by 0.3 suture. 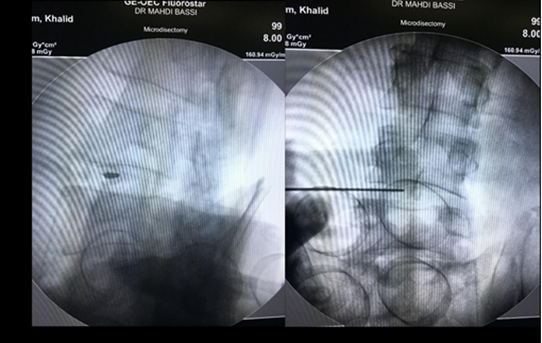 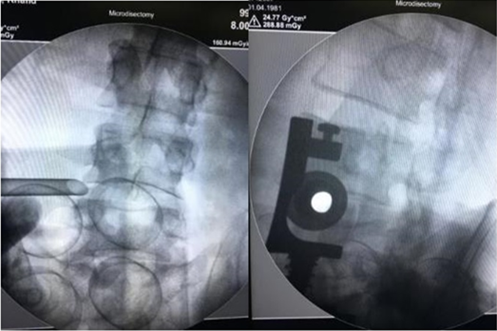 Figure 2: The working channel positioned at kambin tringle. (A) AP; (B) Posteolateral. 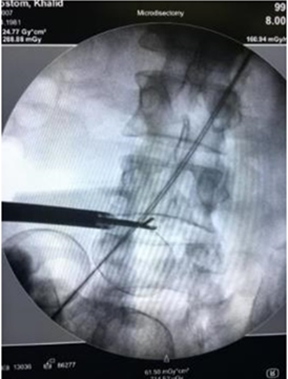 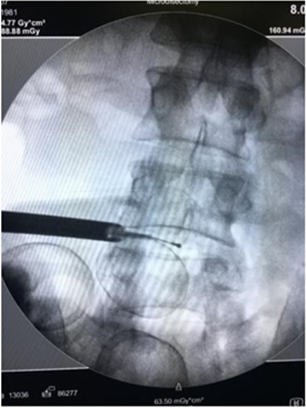 Figure 4: The tip of nucleoplasty probe in the middle of the disc. 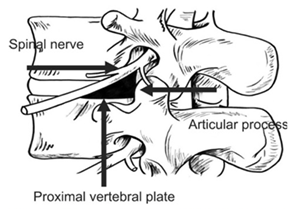 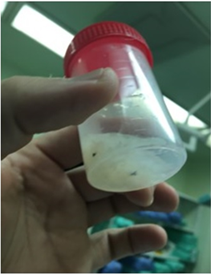 Statistical results were conducted using SPSS to asses statistical significance in the primary outcomes of VAS and ODI preoperatively and postoperatively at 1 month, 6 month and 1 year and to establish any correlation between different variables which are used in this study. P < 0.05 was considered significant.

These results suggested that our procedure have a significant effect on the Oswestry disability index. Specifically, our results show that individuals undergoing the procedure display a significant decrease in the reported ODI score over time (Figure 7). Further analysis of the other variables showed no significant relationship with age, gender, history of trauma, comorbidities, usage of steroids, herniation only vs herniation and degenerative disc disease, single herniation vs grouped herniation (Table 7). On the other hand, results show significantly better results when the operation is done as a primary procedure, rather than a revision (Table7). Results also displayed significantly better results with non-smokers and non-obese patients with regards to the disability index (Figure 9 and 10). 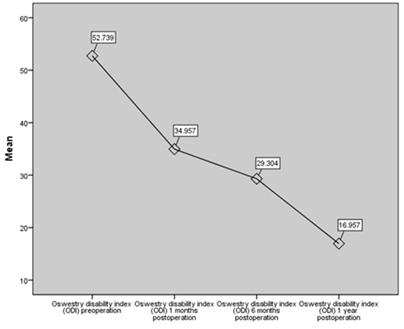 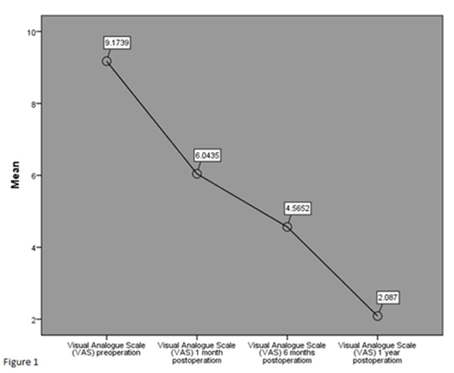 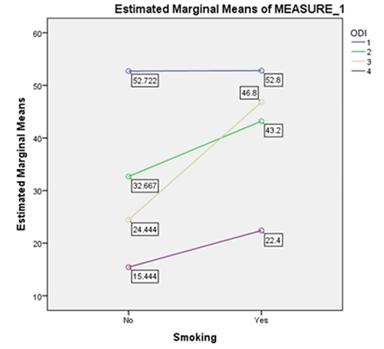 Figure 9: The effect of smoking on ODI score. 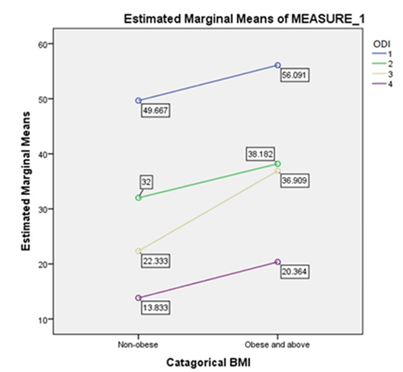 In this minimal invasive approach, Nucleoplasty with Endoscopic Microdiscectomy, it showed promising short-term outcomes with less post-operative pain, hospital stay, minimal blood loss and no reported post-operative complication which can be an alternative option to the standard open Microdiscectomy.

Limitation of this study include small sample size and non-randomized selection of the samples.