Tissue culture is performed to maintain isolated portions of multicellular organisms in an artificial milieu that is outside the individual organism and for considerable periods of time [1]. It is known over a century that cells derived from cultured explants are, in general, different from cells of the corresponding tissue in a living organism [2,3]. In these tissue cultures, cells are liberated from stimulations and prohibition which is ordinary in multi-cellular organisms [4]. This liberation is essential for growth, dedifferentiation, acquisition of pluripotency, immortalization and reprogramming. However, each phenomena related to each other and some of them had not been scientifically justified, such as dedifferentiation, reprogramming and immortalization. For example, it is not unclear that whether the immortalized cell line has individual cellular immortality or population immortality with gene pool sharing. In other case, historically, proliferations of cultured cells were considered to a result of dedifferentiation [2]. To concrete discussion, concrete definition of each phenomenon which happens in liberated tissue cultures. Recently, the cellular dedifferentiation was quantitive defined as increasing of information entropy of transcriptome [5]. A dedifferentiation of animal cells in primary explant culture was corroborated previously [5]. Then we hypothesized that dedifferentiation of cells in primary explant culture is a common phenomenon for diverse multi-cellular organisms. Here we corroborated whether plant cell dedifferentiated in primary explant culture too or not using a shared transcriptome data set [6].

Transcriptome data set was obtained from DDBJ SRA (DRA000400) [6]. In this entry, time course total RNA sampling during reprogramming of leaf cells of the Moss Physcomitrella patens (0, 1, 3, 6, 12 and 24 hours). Each sample has there biological replicates. We mapped transcriptome sequence data using bowtie 1.1.2 [7] since they used SOLiD sequencer. Information entropy was calculated from all count data as previously described [5]. We compared culture time and information entropy of transcriptome data. 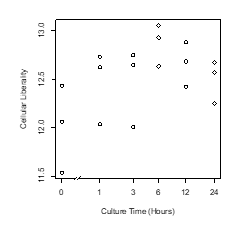 The moss leaf cells were cultured in BCDAT medium. Liberalities, the information entropy of transcriptome were measured in each culture time. 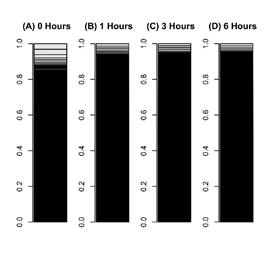