Psychological stress has been implicated in various oral diseases like Recurrent aphthous stomatitis (RAS), Oral lichen planus (OLP), Burning mouth syndrome (BMS), Dry mouth, and Temporomandibular joint disorders (TMDs). People working in the corporate sector are particularly at high risk of developing stress and its associated disorders. Evaluation of psychological stress can be done by salivary alpha-amylase which has been considered as a biomarker of stress.

The present study aimed to assess the stress levels of people working in corporate sector and correlate with the salivary alpha-amylase levels and stress-related oral mucosal changes.

The study included 80 subjects within the age group of 25-60 years working in corporate sector, who were assessed for their stress levels using HAD Scale and accordingly categorized into a STUDY group and a CONTROL group. The STUDY group was composed of 40 subjects with HAD scores of more than 8 and the CONTROL group was composed of 40 subjects with HAD scores of 0-7 ensuring an equal distribution of genders in both groups. The subjects underwent a complete clinical examination to identify stress-related oral diseases. One ml of unstimulated saliva was collected from each subject that was quantified for salivary alpha-amylase. All the findings were subjected to statistical analyses.

Statistically significant higher levels of salivary amylase levels were recorded in the study group. The salivary amylase levels were higher in females than in males. There was a positive correlation between stress levels and oral diseases. The commonly encountered stress-associated oral diseases in the study subjects were RAS, Dry mouth, and TMDs.

Stress has become an imminent part of our busy lives in today’s world. Stress is defined as the psychological and physical state that results when the resources of the individual are not sufficient to cope with the demands and pressures of the situation [1]. Psychological stress has been associated with negative health consequences like Cardiac diseases, Cancers, Gastrointestinal disorders, headaches as well as Oral diseases [2]. People working in the corporate sectors have higher levels of stress and job stress has been a relatively neglected area of research. The demanding framework of the corporate field makes stress at the workplace unavoidable [1]. In India, the software industry has become one of the fastest-expanding industries. The employees of these industries are prone to develop numerous health problems owing to continuous physical and mental stress due to a variety of stressors like extreme competition, unachievable targets, work timings, unfair distribution of work, working relations, etc [3,4]. The assessment of stress can be made qualitatively with the help of questionnaires and quantitative evaluation can be made through various Biomarkers [2]. Several questionnaires like the Perceived stress scale(PSS), Depression Anxiety and Stress Scale(DASS), the State-Trait Anxiety Inventory(STAI), and Hospital Anxiety and Depression Scale(HAD) are used in the medical field. The HAD scale is a routinely used tool to measure anxiety and depression, which is simple and easy to use. It is useful for the initial diagnosis of psychological diseases and has been utilized in many studies [5]. Saliva provides an optimum and non-invasive biological source for quantitative and qualitative assessment of mediators associated with stress. The various salivary biomarkers are Chromogranin A, salivary alpha-amylase, salivary IgA, Cortisol, and Lysozymes [6]. In stress research, Cortisol has become the "gold standard" biomarker to evaluate the dysregulation of the HPA axis and it has widely been studied. Recently, Salivary alpha-amylase has emerged as a valid and reliable marker of Autonomic nervous system (ANS) activity. Together these systems interact with the immune system and are consequently closely involved in the pathogenesis of stress-related diseases [7]. Therefore, Salivary alpha-amylase( sAA) may be utilized as a biomarker for objective evaluation of the psychological conditions of individuals working in stressful surroundings [8]. More studies involving it need to be conducted to authenticate these findings further. The oral mucosa is highly responsive to psychological influences. The oral diseases that are known to occur due to stress are Recurrent aphthous stomatitis(RAS), Oral Lichen Planus(OLP), Xerostomia, Burning Mouth Syndrome, Bruxism, and Myofascial pain dysfunction syndrome(MPDS) [9,10]. Several studies have been conducted which have assessed and associated professional stress with general diseases. But, very few studies have been conducted in the purview of stress-related oral manifestations in the corporate population. Therefore, the aim of the present study was to first assess the stress levels and salivary alpha-amylase levels of Corporate employees. The study also aimed at observing the prevalence of stress related oral disorders and identifying any correlation between the stress levels, salivary amylase levels and associated oral disorders.

This study was conducted among 80 patients aged between 25- 60 years working in corporate sectors as software engineers or higher cadres, with a minimum of 3 years of experience in the same organization, who visited the outpatient department of Oral Medicine and Radiology, The Oxford Dental College, Bangalore. Subjects were explained in detail about the study procedure and written informed consent was obtained before including them in the study. The ethical clearance was obtained prior to conducting the study from the Institutional Committee and Review Board of The Oxford Dental College, Bangalore. The study was conducted in accordance with the Helsinki Declaration, 1975.

Men and women who were between 25- 60 years of age working in corporate sectors as software engineers or higher cadres and who had a minimum of 3 years of experience in the same organization.

Participants with conditions that alter salivary amylase levels and those with systemic diseases that cause oral changes as enlisted below were excluded from the study.

A total of 80 subjects were recruited for the study. The sample size was determined based on the power of the study and the confidence interval of 90% (p<0.05). The subjects were included in the study according to subjective evaluation of their stress levels assessed through the Hospital Anxiety and Depression scale (HADs) questionnaire which was used as a screening tool. According to the questionnaire, scores of 0-7 are considered normal, 8-10 are borderline and above 11 indicate "high stress." As per the scores, the subjects were divided into the following groups.

STUDY GROUP (with stress): Consisted of a total of 40 subjects comprising 20 men and 20 women with HADs score of 8 or more.

CONTROL GROUP (non - stress): Consisted of a total of 40 subjects comprising 20 men and 20 women with HADs score of 7 or less.

Equal composition of both genders was ensured to facilitate the evaluation of gender-based differences in stress, salivary alpha-amylase levels, and oral lesions. A precise case history was recorded which included the patient's demographic data, medical and dental history. This was followed by a clinical examination of the subjects to detect stress-related oral mucosal changes like Recurrent aphthous ulcers, Oral Lichen planus, Dry mouth, and Burning mouth syndrome. Examination of TMJs, masticatory muscles, and trigger spots was carried out to record Temporomandibular joint disorders(TMDs) which are also related to stress. All the findings were documented in the proforma. Unstimulated salivary samples (1 ml) were collected in sterile saliva collecting containers by the SPIT METHOD. Patients were advised to refrain from intake of any food or beverages at least one hour before the collection of saliva. All salivary samples were collected from the subjects between 10-11 AM to avoid diurnal changes of Salivary alpha-amylase. The samples were stored at - 20 degrees and were later subjected to Enzyme-Linked Immunosorbent Assay (Human AMYLASE 1 ELISA Kit) for the estimation of Salivary alpha-amylase levels. After estimation of amylase levels, the statistical correlation of salivary alpha-amylase levels with stress levels and prevalence of oral disorders between the groups was analyzed. 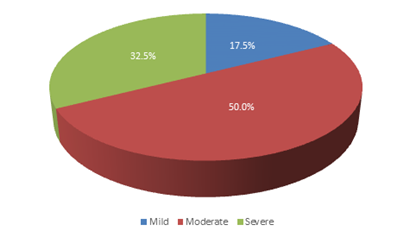 Graph 1: Distribution of stress levels among subjects in Study group 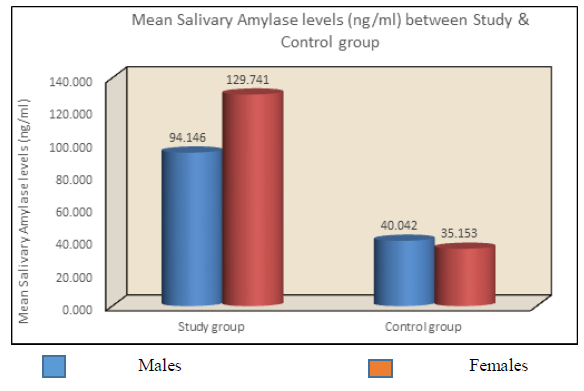 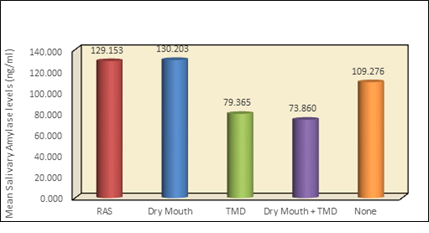 Since this was an exploratory study it is advocated to conduct, more studies involving larger sample sizes, comparative studies with professionals from various sectors and to explore the prognostic value of Salivary alpha-amylase.

In conclusion, within the limitations of this study, it can be postulated that increased levels of stress were noted that correspondingly correlated with high levels of Salivary alpha-amylase among the study group participants and also it was identified that there was positive correlation between stress levels and oral changes. However, there was no correlation between the Salivary alpha-amylase and associated oral changes.