Pyogenic granuloma is a benign localized lesion of the skin and mucosa closely related to trauma, chronic irritation and hormonal changes. The method of treatment is surgical excision. However relapses can occur. For this reason, treatment with alternative methods such as cryotherapy, electrocautery and laser has been investigated in recent years. In this case, the cause of PG was a feeder vessel. The lesion was excised before and recurred within two weeks. An intraosseous feeder vessel was identified by a magnetic resonance imaging. This vessel was exposed and cauterized with electrocautery.

The pyogenic granuloma (PG) or pyogenic fibroma is a common vascular proliferation first described in 1844 by Hullihen [1-3]. It is described as active tumor that responds to various stimuli, such as local chronic low-grade local irritation [4], traumatic injury, hormonal factors [5] or certain kinds of drugs [6]. PG commonly occurs in gingiva [7]. It is rarely found in other locations such as the lips, tongue, buccal mucosa are the next most common sites [4, 8, 9]. PG can occurs in patients of all ages [10, 11] but predominant in the second decade of life in young adult females, possibly because of the vascular effects of female hormones [4, 8, 9]. PG can be classified in to two groups: capillary and non-capillary lobular hemangioma [12]. Clinically, PG is slow growing painless lesion [4, 9] but it may also grow rapidly [13]. Some factors such as inducible nitricoxide synthase [14], vascular endothelial growth factor [15], basic fibroblast growth factor [16] or connective tissue growth factor [17] are known to be involved in angiogenesis and rapid growth of PG. Treatment of PG is usually full surgical excision with sub-periosteal curettage. Lesions may recur up to16% after surgical excision [18]. To prevent recurrence potential irritant factors must be removed [18]. Excision with cryotherapy, laser or electrosurgery is performed to prevent vascular recurrence. This paper presents a case report of a recurrent PG caused by intraosseous vessel, which was treated with success after the identification of a feeder vessel by a magnetic resonance imaging, and its cauterization by electrocautery.

A 25-year-old female patient was admitted to the Karadeniz Technical University Faculty of Dentistry Department of Oral and Maxillofacial Surgery with complaining about a volumetric increase in the papilla region between first and second molars of the upper left arch. The clinical appearance of the lesion was granulomatous, reddish, with a pedunculated base, measuring approximately 15x9x3 at buccal aspect (figure 1a). The patient stated that PG excision had been performed several times before but recurrence occurred within 2 weeks. Radiolucent area was determined between the right maxillary first and second molars on panormaic radiography in routine examination (figure 2). After, T2 TSE Magnetic resonance imaging was performed. In MR, the presence of three intraosseous vessels in the right maxillary posterior region was determined (figure 3).The patient was informed and consent. The lesion was removed by excisional biopsy (figure 1b). The fragments were individually sent for histopathological examination. The microscopic sections of the main lesion revealed capillary PG. The image revealed a large vessel in the interproximal bone between the upper right the first and second molar, associated with the lesion. This vessel may be feeder so a blood vessel was exposed and cauterized with electrocautery (figure 1c). After 4 months control follow up, no signs of recurrence were noted.

figure 1: a) The clinical appearance of lesion (15x9x3 mm); b) Hemorrhage after excision; c) The feeder vessel site after cauterization. 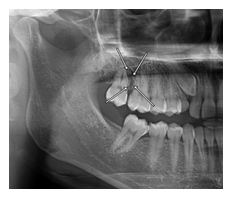 figure 2: Radiolucent area between the maxillary right first molar and the second molar in panoramic radiography. 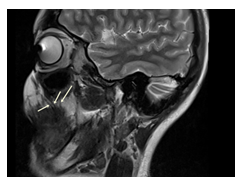 figure 3: It is observed by MR that the three intraosseous vessels are located in the right maxillary posterior region.

Pyogenic granuloma is often seen vascular proliferation that generally presents as a solitary, sessile, or pedunculated lesion with a fragile surface prone to bleeding, ulceration, and crusting [19]. Treatment of PG is usually full surgical excision with sub-periosteal curettage. However, lesions may recur up to 16% after surgical excision [18, 20] and the relapse rates (3–8.2%) [21-23]. Recently, some other treatment protocols have been stated [18]. These are laser theraphy, cryotherapy and electrocautery treatment option which may need to be tried in cases with recurrence to prevent bleeding of the vascular structure [18]. To prevent recurrence of PG, vascular bleeding must be controlled. Hemostasis can be achieved using different methods such as mechanical, thermal/energy-based, chemical (pharmacological-based) methods. Conventional methods for control of bleeding include suturing, manual compression, or ligatures [24]. Both of electrosurgery and laser cauterization (LC) are thermal methods. ES has been defined as the intentional passage of high-frequency wave forms, or currents, through the tissues of the body to achieve a controllable surgical effect [25]. In addition ES and LC can create areas of char and necrosis of tissue, increasing the possibilities of infection, and damaging wound edge which can be lead to impaired healing [18, 26]. ND:YAG and Co2 lasers are often used because of their superior coagulation properties [18]. Tay et al [27] conducted flash lamp pumped pulsed dye laser and reported that as the number of sessions increased, relapse decreased. Other surgical treatment options of PG to prevent recurrence include cryosurgery in form of either liquid nitrogen spray or a cryoprobe [28, 29]. Ishida and Ramos-Silva [28] stated that cryosurgery would also prevent relapse of granulomas.

However, Ghodsi [29] described that one session of cryosurgery may not be enough. In present study, since cautery was used, one session was sufficient. In the present case, there is radiolucency between the first and second molars in the panoramic film and MRI. Abe et al [30] described that MRI to visualize pyogenic granuloma is successful method. Kusakere et al [31]. described that angiography was used because of the superior detection of feeder vessels. The patient refused to angiography imaging. After that, electrosurgical treatment was performed and only one session was sufficient. In the literature, electrosurgical use is few for pyogenic granulomas with high recurrence. As a result, one-session electrosurgery prevented recurrence in this case. In cases with frequent recurrence of pyogenic granuloma, firstly pathology and then ES can be recommended.