Background: The use of catheter-directed thrombolysis (CDT) is an effective option for the treatment of acute lower limb ischaemia, but has a high complication rate. Systemic bleeding and bleeding at the puncture site are particularly dreaded. Purpose: To evaluate the safety and effectiveness of the new vascular access protection system CaveoVasc® protection system in patients undergoing CDT.

Materials & Methods: The prospective, single-center single-arm CaveoVasc® study enrolled 20 patients with critical limb ischaemia (CLI) requiring treatment with CDT. Primary safety endpoint was the rate of all major bleedings (BARC > type 3) from the start to the end of the CDT procedure. Secondary safety endpoints were bleedings (BARC ≥ 1 and BARC ≥ 2) and adverse events at discharge and at 30 days. The primary performance endpoint was length of CDT. Secondary performance endpoints were the rate of subjects completing the CDT without early interruption due to access site complication, the rate of successful thrombolysis without bleeding complication and pain at access site.

Results: Twenty patients with CLI requiring treatment with CDT were enrolled. No major bleeding occurred at the access site. The CDT treatment continued for a mean of 16.5+/- 5.2 hours without interruption due to bleeding complications at the access site. In 5 cases minor bleeding (classified as BARC 1 and BARC 2) was documented but only two of these patients had a bleeding at the site of the puncture during the procedure. In 18 cases (94.7%) the CDT procedure was completed successfully and without early interruption. At the start of the CDT, the average pain score was 0.3 ± 1.1, 2.0 ± 2.3 after 6 hours, and 0.8 ± 2.0 at the end of the CDT procedure. Twelve adverse events had occurred by the 30 day-visit.

Conclusion: The study has shown that the CaveoVasc® Protection Device is safe and effective, avoiding major bleeding complications at the access site and increases safety for patients undergoing CDT.

Acute limb ischemia (ALI) is characterized as an abrupt decrease in limb perfusion that compromises the limb's viability [1]. The incidence of the ALI is approximately 1.5 cases per 10,000 persons per year [2]. The 30-day mortality rate for patients with ALI, in the absence of rapid intervention, is approximately 15%, with an amputation rate ranging from 10-30% [3]. Treatment options for ALI include systemic anticoagulation, followed by either open surgical intervention (thromboembolectomy or surgical bypass), or by catheter directed thrombolysis (CDT)) [4]. Various catheter based options include: infusion of fibrinolytic agents (pharmacological thrombo-lysis), pharmacomechanical thrombolysis, catheter-mediated thrombus aspiration, mechanical thrombectomy, and any combination of the above [5].The use of the CDT is an effective option for the treatment of ALI and has been shown to have comparable results to surgical treatment [6-8]. However, there were more bleeding complications in the thrombolysis group [6, 7].

The major complications reported with CDT include major bleeding at the access site or non-access site bleeding, causing early termination of the CDT. Bleeding at the puncture site is more common [8-11]. Currently, there are no devices on the market that are approved and intended for vascular access and protection during CDT in patients critical limb ischemia (CLI). CaveoMed developed the CaveoVasc® Thrombolysis Protection System, a vascular access protection for use in thrombolysis procedures. The function is to minimize risks of access site bleeding complications during lengthy CDT procedures. Pressure balloons are inflated outside the artery to maintain a tight seal of the arterial puncture site during thrombolysis. The aim of the study was to evaluate the safety and effectiveness of the new CaveoVasc® protection system in patients undergoing CDT.

The CaveoVasc® study was a prospective, single-arm study performed at the University Heart Center Freiburg – Bad Krozingen. The aim of the study was to evaluate the safety and effectiveness of the new CaveoVasc® thrombolysis protection system for femoral artery access and protection in patients treated with CDT for limb ischemia. The study was performed in accordance with standard EN ISO 14155 for clinical investigations with medical devices on human subjects and recommendations guiding physicians in biomedical research involving human subjects adopted by the 18th World Medical Assembly, Helsinki, Finland, 1964 and later revisions. The clinical investigational plan, informed consent, any other specific study documents were reviewed and approved by the local Ethics Committee and Competent Authority before enrolment.

Patients, who received CDT due to a CLI were included in this study. Supplement Table 1 shows the inclusion and exclusion criteria.

A retrograde approach was used except in one intervention where an antegrade approach was chosen. After intraluminal recanalization of the occlusion a 0.018-inch wire was inserted and over this wire the 6F Rotarex STM thrombectomy catheter (Straub Medical AG, Vitters-Wangs, Switzerland) was introduced. The number of passages with the system was decided by the investigator. The decision to induce a thrombolysis was left to the investigator. CDT was delivered using a multisidehole catheter (Cragg McNamara; ev3 Endovascular Inc, Plymouth, Minn or Unifuse; Angiodynamics, Latham, NY). In all cases the agent for thrombolysis was recombinant tissue plasminogen activator. After a bolus was given the flow rate was determined individually. The patients received infusions of heparin controlled by activated partial-thromboplastin time. Patients were monitored in the intensive care unit during lysis therapy in accordance with clinic standards. 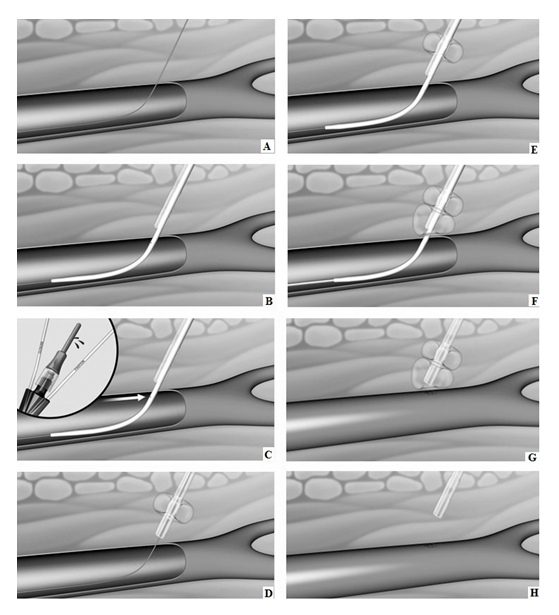 Figure 1: Schematic representation of CaveoVasc® procedure. A) Guidewire in femoral artery; B) CaveoVasc® is applied after punction of the femoral artery and placement of the guide wire, thus in the beginning of the procedure; C) Removal of Locator, blood backflow indicates correct position; D) Infaltion of the Fixation Balloon – the inflated balloon secures the position of CaveoVasc® in the tissue; E) Placement of the sheath; F) Inflation of Pressure Balloon – Start of thrombolysis therapy via catheter perfusion; G) Removal of the sheath and catheter after the end of the thrombolysis procedure; H) Removal of CaveoVasc®. 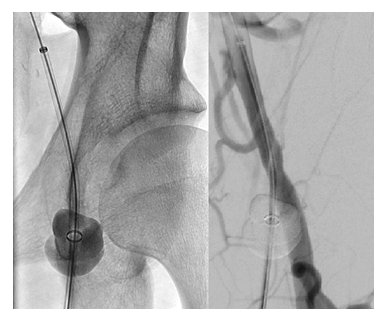 The primary safety endpoint was the rate of all major bleeding (BARC > type 3, supplement table 2) from the start to the end of the CDT procedure. Secondary safety endpoints were bleeding (BARC ≥ 1 and BARC ≥ 2) from the start of the CDT procedure to the end of the CDT procedure and adverse events were recorded at discharge and 30 days. The primary performance endpoint was length of CDT. Secondary performance endpoints were the rate of subjects completing the CDT without early interruption due to access site complication, the rate of successful thrombolysis without bleeding complication and pain at access site. Access site pain was evaluated using the verbal pain scale (0 to 10).

Twenty patients with limb ischaemia requiring treatment with CDT were enrolled. The age ranged between 38 and 88 years (mean 66.2 ± 12.7). Seventeen (85%) of the population were male patients.  Cardiovascular risk factors and relevant laboratory parameters are shown in Table 1. All study devices were inserted and removed successfully. No device deficiency was recorded during the study. The lysis catheter could not be inserted in one patient due to anatomical reasons (the target vessel had been ligated proximally after a previous surgical vascular procedure) although the CaveoVasc® Thrombolysis Protection System device was successfully deployed the thrombolysis couldn’t be performed. No major bleeding (BARC > type 3) occurred. Overall the number of minor bleeding episodes during treatment was small. Five bleeding episodes were classified as BARC 1 and BARC 2. Two of these patients had bleeding at the site of the puncture during the procedure.

The average time before catheter removal was 17.32 ± 5.08 hours, and the average time before device removal was 16.98 ± 6.25 hours. The duration of CDT in ITT group and PP group was 16.5 hours ± 5.2 and 16.9 ± 4.7 respectively. Eighteen patients (94.7%) completed the CDT procedure without early interruption. In one patient the CDT procedure failed because of a presumed access site complication due to previous surgical ligation of superficial femoral artery. Pain at the access site was evaluated by the patients at the start of the CDT, after 6 hours and at the end of the CDT procedure. The average pain score was 0.3 ± 1.1, 2.0 ± 2.3 and 0.8 ± 2.0, respectively. In 19 patients a final telephone interview was performed. One death was reported by the family doctor on the 14th post-interventional day due to acute global cardiac decompensation.

Access site bleeding complications during thrombolytic treatment are reported in almost a quarter of cases [16, 17]. The high rate of complications on the access side can be explained by the long treatment duration. In the present study the lysis time was 17 hours on average. Other studies reported an average lysis time of over 20 hours. [12, 13, 18]. Patients must remain as immobile as possible while the sheath is positioned in the femoral artery. As the duration of treatment increases, it can be presumed that problems at the access site will arise, due to slight movements of the patient. In addition to the vascular trauma caused by the puncture and the indwelling lysis catheter, thrombolysis and the consequent systemic heparinization, causes significant anticoagulation.

The CaveoVasc® Thrombolysis Protection System can be used as add-on to current thrombolysis therapy. It is intended to reduce bleeding complications in CDT by protecting the puncture site by stabilizing the sheath with a double balloon technique and tamponading minor bleeding in the puncture channel. The application is simple and requires only a few additional intervention steps. The feasibility of this approach has been shown and all study devices were inserted and removed successfully. No major bleeding occurred; 5 bleedings classified as BARC 1 and BARC 2 occurred but only two of these patients had bleeding at the puncture site during the procedure. One thrombolysis had to be terminated after a CT scan and angiography were performed for severe abdominal pain and the inflated balloons erroneously interpreted as hematoma and the lysis therapy consequently stopped. However, the patient remained stable and duplex sonography showed no relevant hematoma. In the only patient with an antegrade access a hematoma occurred despite the CaveoVasc® Thrombolysis Protection. The use of the system is now only recommended with retrograde access.

The limitations of this study are the single-arm design and the small sample size. The present study excluded cachectic patients. Further investigation is needed to determine whether the device can be used in very thin patients, as subcutaneous tissue is needed to fix the device. The purpose of the current study was to collect safety and feasibility data for CE marking. The next step should be a randomized controlled trial compared to CDT with and without CaveoVasc® Protection.

The study set out to explore the safety and performance of the CaveoVasc® Thrombolysis Protection System in patients treated with CDT for limb ischemia. The results support the conclusion that the device performed as intended as both the primary and secondary endpoints were achieved without major difficulties or adverse events related to the device during the procedure and subsequent follow up.

The authors have no conflict of interest.