#These 2 authors equally contributed to this work.

Background and Aims: We have previously demonstrated the cardiac beneficial effects of vitamin D (VD) supplementation. The aim of this study was to evaluate the combined effects of voluntary Physical Exercise (PE) and VD on cardiac remodeling and function in tertiary prevention in a mice model of diet-induced diabetes.

Methods and Results: Mice were fed with a high fat and sucrose diet for 10 weeks. Then, they were divided into 4 subgroups for the 15 following weeks: diet, diet/vitamin D, diet/PE and diet/VD/PE. Glucose homeostasis assessment and echocardiography were performed one week before the end of the protocol. Blood samples and hearts were collected at sacrifice. After 25 weeks of diet alone, obese mice displayed diabetes, cardiac concentric hypertrophy and impaired global and regional myocardial function. PE and VD supplementation had no effect separately on glucose homeostasis but improved cardiac remodeling and preserved cardiac function. Their combination improved glucose homeostasis and was associated with physiological cardiac remodeling, with however no additional beneficial effect over PE or VD alone on cardiac function.

Conclusion: The major finding of the present study is that VD supplementation and PE exert similar cardioprotective effects in diabetic mice, with no major synergistic effect from their combination.

Obesity and its associated metabolic disorders, such as Type 2 Diabetes (T2D) [1], are largely known to increase cardiovascular morbidity and mortality. Notably, T2D is associated with structural and functional changes in the heart, linked to multiple pathophysiological mechanisms [2].  Hypovitaminosis D is highly prevalent in T2D patients [3,4] and is associated with adverse cardiac events [5]. Because vitamin D (VD) shows properties on many signaling pathways, including cardiac physiological processes [6], studies have investigated the cardiac effects of VD supplementation, especially in streptozotocine-induced diabetic rats [7, 8]. However, the cardiac effects of VD supplementation in tertiary prevention in more physiological models such as High-Fat (HF) regimen remains poorly documented [9].  Previous studies from our laboratory in HF-fed mice leading to T2D have shown that 15 weeks of VD supplementation reduced hepatic steatosis and adipose tissue inflammation [10] and exerted cardioprotective effects supported by an alleviation of regional myocardial dysfunction and hypertrophy, potentially through a modulation of cardiac lipotoxicity [11]. The beneficial effects of Physical Exercise (PE) on the incidence of cardiovascular diseases and cardiac remodeling and function have long been recognized [12,13]. Of note, PE promotes cardioprotection in rodents with diet-induced T2D [14, 15]. Therefore, combining PE with nutritional approaches, like VD supplementation, seems interesting to improve cardiometabolic health and could provide synergic outcomes. We have recently shown that this dual intervention in diabetic mice favorably affected insulin sensitivity and liver triglycerides accumulation [16]. In this context, the aim of this study was to bring further information on the effect of a 15-week PE and VD intervention on cardiac remodeling and function in diabetic mice with nascent cardiomyopathy and potentially highlight an enhancement of VD cardioprotective properties [11].

All animal experiments were approved by the local research ethics committee (No.2017071209197796) and performed in accordance EU directive 2010/63/EU and French Ministry of Agriculture guidelines on the care and use of animals for scientific purposes (No. CEEA-00322.03). C57BL/6J mice (Janvier Labs, France) were housed under normal controlled conditions and were randomly assigned into two groups: a control group (NC) and an obese group (HFS: high fat/sucrose). The NC group (n=30) received a normal chow diet (A04, SAFE Diets, France) and water for 25 weeks. The HFS group was fed with a fat-enriched dough (60% of energy intake from fat, 230HF, SAFE Diets, France) and 10% sucrose-added water for 10 weeks. After this period, the HFS mice were divided into 4 subgroups for the 15 following weeks: a sedentary HFS group (HFS, n=30), a sedentary HFS group supplemented with VD (15.000 UI.kg-1 cholecalciferol; customized HF230; SAFE Diets, France) (HFS+D, n=30), a voluntary PE (introduced by free access to an in-cage running wheel) HFS group (HFS+ex, n=15) and a voluntary PE HFS group supplemented with VD (HFS+D+ex, n=15). As we previously described [10, 11], body weight was measured weekly and both glucose homeostasis assessment and echocardiography were performed one week before the end of the protocol. In addition, blood samples and hearts were collected at sacrifice. Significant differences between groups were determined using a generalized linear model, with the Bonferroni post-hoc test using IBM SPSS statistics 20.0 (IBM Corp., USA). Heart rate was introduced as covariate, when appropriate. Values are expressed as mean ± SEM. Values not sharing the same letter were significantly different at p<0.05.

As reported in table 1, the HFS diet induced a major weight gain in mice that was improved by PE and the combination of VD and PE. No significant improvement of diet-induced hyperglycemia and hyperinsulinemia was observed in HFS+D, HFS+ex or HFS+D+ex mice. Only the combination of VD and PE improved insulin sensitivity. Interestingly, a significant decrease in triglyceride levels was observed in HFS+ex and HFS+D+ex mice, although no hypertriglyceridemia was reported in HFS mice. As shown in figure 1, the development of concentric cardiac hypertrophy induced by diet in HFS mice was impeded by 15 weeks of VD supplementation. Interestingly, exercise alone exerted similar effects to those of VD. In contrast, HFS+D+ex mice presented a concentric cardiac hypertrophy characterized by increased cardiac mass and relative wall thickness, at an intermediate stage between NC and HFS mice. Although ejection fraction remained preserved (>50%) in all groups, a slight but significant reduction was observed in HFS mice (figure 2 B). All experimental groups (e.g. VD and/or PE) were however similar to NC mice. Very interestingly, longitudinal and circumferential left ventricular strains (figure 2 C, D) were markedly decreased by HFS diet but improved to the same extend and restored to NC values in all intervention groups.

Table 1: Effects of 15 weeks of VD supplementation and/or PE on morphological and biological parameters. 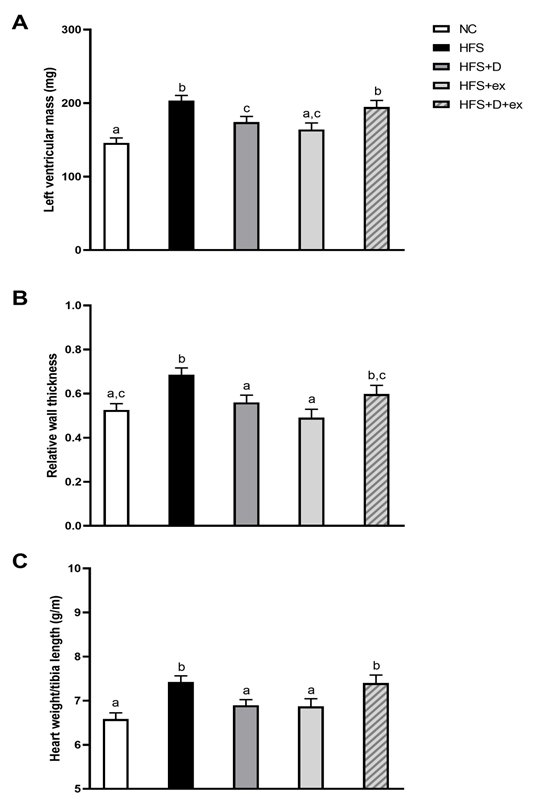 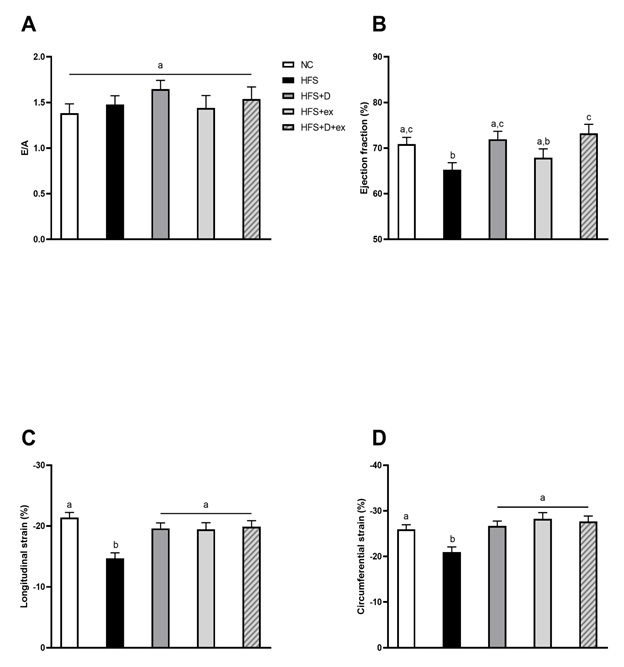 Figure 2: Effects of 15 weeks of VD supplementation and/or PE on cardiac function.

The present study is the first to investigate the combined effects of voluntary PE and VD supplementation on cardiac remodeling and function in tertiary prevention in a rodent model of diet-induced T2D. Numerous studies demonstrated beneficial effects of voluntary PE or exercise training on cardiac function in pharmacological [17] or diet-induced [14] rodent models of diabetes, agreeing with our results. Data regarding the effects of VD are scarce [11]. The salient finding from our study is that VD supplementation exerts similar favorable effects to PE on both regional and global cardiac function while their combination did not yield to additional benefits. Since VD and PE were each other already able to normalize cardiac function, synergic effects were unlikely to be expected. Of note, PE or VD individually prevented the development of HFS-induced pathological cardiac remodeling, in accordance with previous studies [9, 17]. Interestingly, their combination yielded to cardiac hypertrophy, similar in magnitude to that one seen in HFS mice, although physiological. The underlying mechanisms associated with improvements in cardiac remodeling and function consecutive to PE or VD imply very likely favorable changes at both systemic and cardiac levels in signaling pathways related to inflammation and oxidative stress [18] leading to enhancement in cardiac metabolism, calcium handling, apoptosis and fibrosis [19, 20].  Aside, we also demonstrated cardioprotective effects of VD through modulation of cardiac lipotoxicity [11]. Further investigations will be needed to properly characterize the remodeling related to PE combined to VD and to define the underlying mechanisms responsible for enhancement in regional function. Altogether, our results further emphasize the cardioprotective value of interventions with VD and PE in cardiometabolic diseases.

This research was supported by the Platform 3A, funded by the European Regional Development Fund, the French Ministry of Higher Education, Research and Innovation, the Federative Research Structure TERSYS, the Provence-Alpes-Côte d’Azur Region, INRAE, INSERM, and AMU.

Authors have no conflicts of interest to disclose.

Authors have no conflicts of interest to disclose.

This research was supported by the Platform 3A, funded by the European Regional Development Fund, the French Ministry of Higher Education and Research, the Research Structure TERSYS, the Provence-Alpes-Côte d’Azur Region, INRAE, INSERM, and AMU.