Acute Coronary Syndrome in Young Adults: Beware of an Anomalous Origin of the RCA

Cardiologists and cardiac surgeons may have the clinical conception that the contralateral rudimentary vessel in a left or right dominant coronary tree should not be revascularised because of its nonsignificant myocardial blood supply. We would like to highlight and argue that this conception should be challenged in subjects with ischemia driven life threatening arrhythmias caused by the anomalous course of the rudimentary artery. Hereby we would like to contribute to the appropriate clinical approach of young subjects with an acute coronary syndrome. We describe two young patients with an Acute Coronary Syndrome who appear to have an anomalous rudimentary right coronary artery. These cases may suggest that even in a left dominant coronary system an anomalous origin of the RCA can be life threatening. Surgery should be considered at the time that this symptomatic anomaly is identified.

A 25 year old Caucasian male with no relevant medical history was presented at the hospital after a successful cardiopulmonary resuscitation because of ventricular fibrillation during strenuous exercise at a soccer match. Prior to the out of hospital cardiac arrest (OHCA), the patient had episodes of angina pectoris during several weeks for which outpatient analyses were scheduled. Coronary angiography (CAG) showed a left dominant coronary system with no significant stenotic lesions. The small RCA had an anomalous course. Coronary computed tomography angiography (CCTA) of the coronary tree showed the origin of the RCA at the sinotubulair junction between the left and right coronary sinus (Figure 1). The narrow proximal RCA had an interarterial course (IAC) between the aorta and pulmonary artery (Figure 2). A treadmill stress test was performed and showed no ischemia or arrhythmia. Echocardiography showed no structural cardiac anomalies. Magnetic resonance imaging (MRI) showed no ischemia or fibrosis of the heart. As the life threatening arrhythmia was considered to have a causal relation with the congenital anomaly, patient underwent surgery. The RCA showed an extremely long intramural course in the aortic wall. Because of the narrow intramural RCA a patch plasty with the saphenous vein was performed.

A 46 year old Caucasian male with no relevant medical history, was admitted to the hospital with chest pain suspect for angina pectoris. During the observation in the emergency department he had a non-sustained ventricular tachycardia (VT). He was hemodynamically stable and had no palpitations or chest pain. The electrocardiography (ECG) and the laboratory findings were within normal limits. Because of this VT a CAG was performed which suggested an abnormal origin of the RCA in a left dominant coronary system. A CCTA confirmed the left dominant coronary system without stenosis and showed a small RCA with a course between the aorta and the pulmonary artery. The origin of the RCA was above the Valsalva sinus at the level of the left coronary cusp (Figure 3). A single photon emission computed tomography (SPECT) myocardial scintigraphy was performed and showed no signs of ischemia. The patient’s heart rhythm was monitored during several days and showed no further arrhythmia. As no life threatening arrhythmia occurred, we argued that in this case surgery was not indicated. 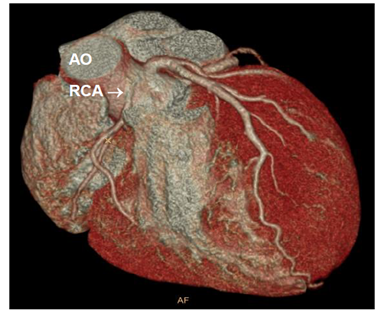 Figure 1: 3D reconstruction of a Coronary Computer Tomography Angiography showing the aberrant origin of the Right Coronary Artery (RCA) at the sinutubular junction between the left and right coronary sinus. 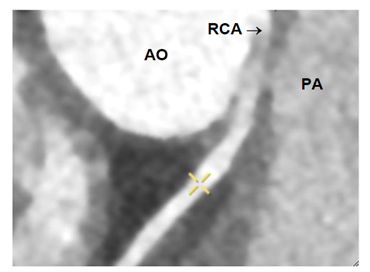 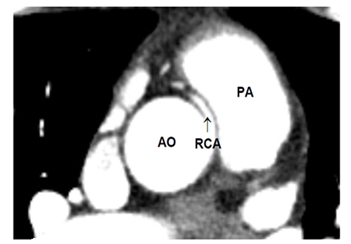 Figure 3: Coronary Computed Tomography Angiography image of the heart showing the anomalous origin of the Right Coronary Artery (RCA) above the sinus of Valsalva with an interarterial course between the Aorta (AO) and the Pulmonary Artery (PA).

An acute coronary syndrome (ACS) in young adults warrants thorough assessment of potential underlying operating mechanisms. An anomalous origin of the coronary artery from the opposite sinus of valsalva (ACAOS) is characterized by an anomalous course and/or termination of a native coronary vessel [1, 2]. ACAOS can be malignant or benign. The malignant variant has a interarterial course between the pulmonary artery and the aorta. Other high-risk features are slit-like ostium, acute take-off angle or an intramural course where the proximal part of the anomalous vessel passes in the tunica media of the aortic wall with proximal narrowing and an elliptic vessel shape [4]. The prevalence of ACAOS in the general population is about 1 % [5]. An intramural course in 0,44% [4]. Coronary CT Angiography (CCTA) outperforms other imaging modalities for ACAOAS. Accurate assessment is crucial to guide management of affected patients and determine their sports activity. The treating team may choose between medical treatment, surgical correction or other invasive techniques.

The benign variant represents all other courses such as prepulmonic or retroaortic. It is suggested that the malignant variant may cause myocardial ischemia and consecutive arrhythmia even in the absence of atherosclerosis. The anomalous vessel is prone to dynamic compression during physical exercise. Almost all patients with an anomalous origin of the RCA on which a CCTA had been performed had an interarterial course of the RCA [1]. In some cases this may cause ischemia which can be explained by entrapment between these arteries and various other factors that induce obstruction of the anomalous artery [3], and usually occurs during exercise [4]. Case 1 demonstrates that even in a left dominant coronary system an anomalous origin of a small RCA with an interarterial course may cause life threatening arrhythmias. Two series of patients [3, 4] (respectively 13 and 31 patients) with an anomalous origin of the coronary arteries showed that surgery on these arteries is relatively safe. Both cases were discussed in our heart team, consisting of imaging-, rhythm-, and interventional cardiologists and a cardiothoracic surgeon. Because patient 1 presented with ventricular fibrillation and is only 25 years old, we argued that he was a candidate for surgery even with this left dominant coronary system. The heart rhythm of patient 2 was observed during several days and no other arrhythmia occurred. Exercise stress tests showed no signs of ischemia and no arrhythmia. We argued that surgery was not indicated. His age also supported this decision. Both patients had an uneventful clinical course after one year follow up.

Management of subjects with ACAOS remains challenging. Risk calculation and the decision to treat is difficult as there is no uniform way to stratify these patients. The treatment dilemma arises especially when there is negative stress testing, a small right ACAOS, inter arterial course, left coronary artery dominance and a small left ventricular myocardium at risk [5]. If these patients have symptoms such as chest pain, syncope, or return of spontaneous circulation after an out of hospital cardiac arrest (OHCA) or ventricular arrythmia, these patients should undergo percutaneous coronary correction or surgical correction. It is unclear yet whether medical therapy with beta-blockers is sufficient for an event free clinical follow up in the presence of a arrhythmogenic substrate due to ACAOS [5, 6]. Resumption of competitive sports may be allowed three months after intervention in the absence of inducible ischemia or symptoms [7]. An extensive discussion between the treating team and patients about the risk and benefits of conservative versus surgical management should take place. The approach of the much higher risk Left ACAOS with IAC differs from the lower risk right ACAOS with IAC. Left ACAOS without IAC and right ACAOS with intraseptal, prepulmonic, or retroaortic courses are generally considered benign [8]. These patients are not referred for surgery and not restricted from competitive sports when they are free from exercise induced ischemia. It appears that a percutaneous coronary intervention (PCI) is a safe and successful alternative in subjects with right ACAOS [9]. Thus, the treatment plan for patients with ACAOS should be based on interdisciplinary decision between treating physician, cardiovascular imaging experts interventional cardiologists and cardiac surgeons. Patient age, sports, behavior, anatomic features of ACAOS and ischemia testing should also be considered. Depending on chosen strategy follow, up should focus on aortic stenosis and insufficiency, restenosis and ischemic changes [10, 11].

These cases demonstrate that patients with an anomalous origin of the RCA with an interarterial course in a left dominant coronary system are susceptible for ischemia induced arrhythmias. In these cases surgery should be considered as a treatment option.

Ethics approval and consent to participate:

Consent for publication: Written informed consent was obtained from the patients for publication of this case report and any accompanying images. A copy of the written consent is available for review by the Editor-in-Chief of this journal.

Availability of data and material: Not applicable

Funding: No funding was received for this case report.