A male patient aged 19-year-old complaints of swelling on left side of face. History of present illness revealed the onset of swelling present since 5 years and the lesion is gradual progressive in nature and reached to the present size. No significant family history and habit history were noted. Extra oral examination revealed swelling on lower left side of face. Lymph nodes were palpable on left lower border of mandible. Intraoral examination showed that the lesion extend for left side of mandibular canine to left posterior border of mandible. The lesion was soft in consistency.

Radiographic examination showed mixed radiolucent lesion over left angle region of mandible. CT images revealed ill defined multilocular radiolucent lesion on left side of mandible, crossing midline anteriorly and posteriorly extends upto ramus and coronoid process. Marked expansion of both buccal and cortical plate is also seen. Inferiorly alveolar canal is not traceable on diseased site. Based on clinical and radiological examination a provisional diagnosis odontogenic tumors most probably Ameloblastoma was made. A decision of hemi-madibulectomy along with lymph node resection was made and the excised specimen was sent for histopathological evaluation.

On gross examination of the tissue, whole hemimandibulectomy along with Level 1 lymph nodes were received. The excised specimen extended from the condylar and coronoid process to lower Central Incisor of the opposite side. Specimen showed expansion in both buccal and lingual side with thinning of cortical plates, which were almost paper-thin. Teeth present were permanent right mandibular incisors till permanent left mandibular molars, surface hard, creamish white in color, glistening surface. A total six bits of tissue were taken from lingual side of the lesion, distal part of ramus, deeper part of the main lesion, buccal side of 35, and lingual side of 36 respectively and kept for routine processing and hematoxylin and eosin staining. While removing deeper part of the main lesion, oily fluid was found which was sent for biochemical evaluation. Lymph nodes were also kept for routine processing and staining done with hematoxylin and eosin stain.

For further confirmation of the diagnosis, immunohistochemical expression of proliferative marker Ki-67 was performed, sporadic positivity was observed in the lesion and also in atypical odontogenic cells in the lymph node.

A 69-year-old female patient walks into the outpatient unit of Department of Oral Surgery, KGMU with a chief complaint of swelling and pain in left lower jaw region since 6-7 months. The onset of the swelling started about 6 months ago and was progressive in nature. No relevant family history was evident. Patient had a habit of Bidi smoking one packet in 2-3 days since 40 years and areca nut chewing once a day since 40-50 years. Patient quit the habit of Bidi smoking 2 years back but continued with areca nut chewing.

On extra-oral examination, swelling at left angle of mandible was exhibited which was mildly tender on palpation. Lymph nodes were non-palpable. Intra oral examination revealed the swelling of the lesion extended from left angle of the mandible starting from premolar to ramus of mandible. The lesion was firm in consistency and was tender on palpation. No discharge were associated with it.

Radiographic examination revealed mixed radiolucent lesion over left angle region of the mandible. Computerized Tomography revealed an ill defined bony expansile lesion present on left side of mandible extending from distal to 35 to ramus area marked bony reaction. On the basis of clinical and radiological examination, provisional diagnoses of Ameloblastoma and the differential diagnosis of Osteomyelitis, Malignancy and Central Giant cell Granuloma were made. An incisional biopsy was then performed from left angle region of the mandible. Tissue was sent for histopathological examination in formalin fixed bottle.

Gross examination of the tissue revealed two soft tissue specimen were creamish-brown in color, firm in consistency, smooth surface and were oval in shape. Both the tissues were kept for routine processing.

Immunohistochemical analysis of Ki-67 was performed and sporadic positivity was seen in the stellate reticulum like central cells of the odontogenic islands confirming the diagnosis of Ameloblastic Carcinoma. 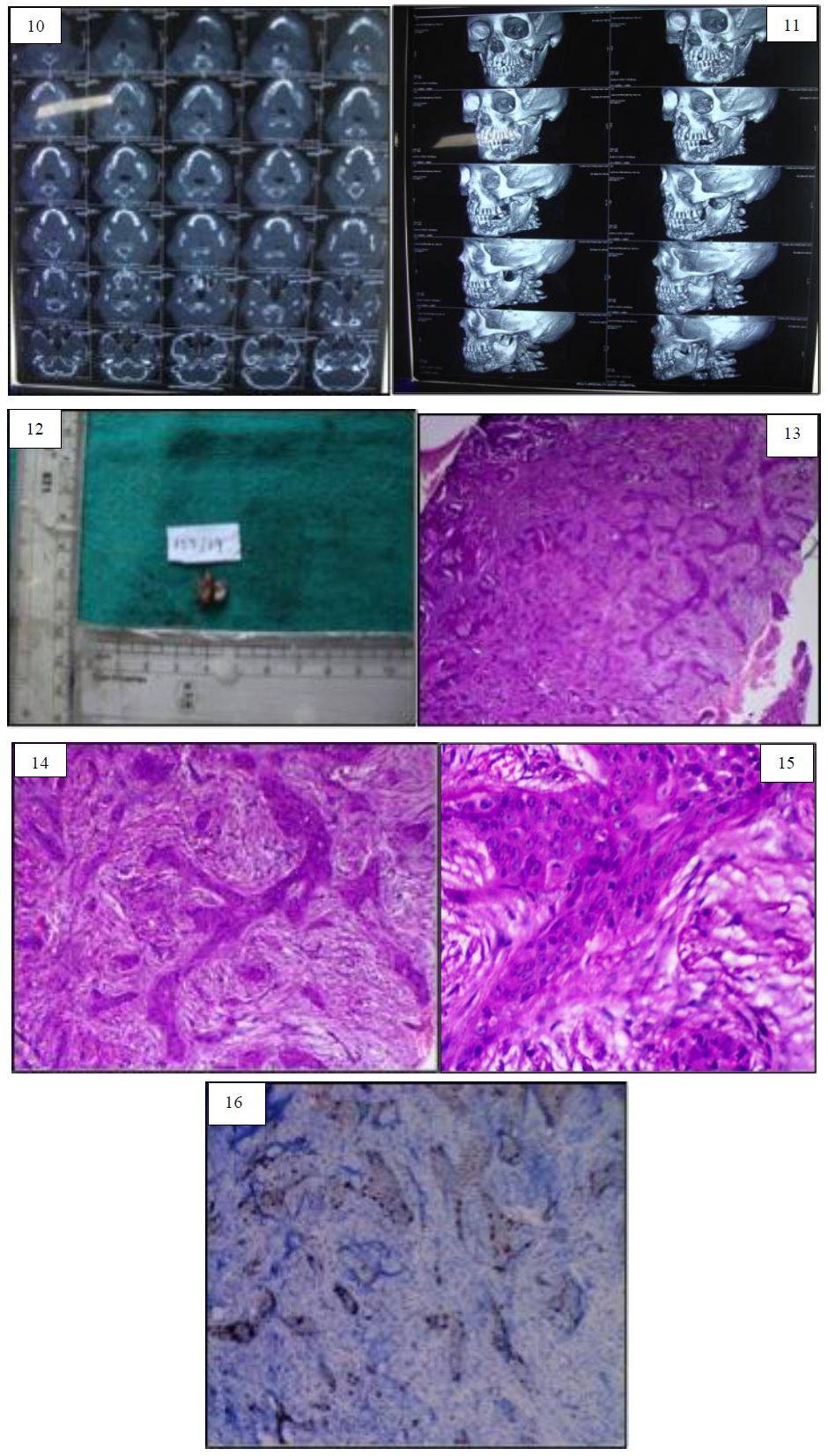 Ameloblastic carcinoma is extremely rare, aggressive malignant epithelial odontogenic tumor with a poor prognosis [5]. Deng et al conducted a systematic review in the year 2018 and reviewed a total 125 cases of Ameloblastic Carcinoma [9]. Kallianpur et al reported total incidence of 1.6% cases of AC of all the odontogenic lesions was reported in the literature [10]. Since Ameloblastic Carcinoma presents as varied clinical presentation, accurate histopathogical diagnosis has immense value in concluding a diagnosis. It can arise de novo or in a preexisting benign ameloblastoma [5]. Even though, it is believed that AC is derived from the dental embryonic remnants or entrapped salivary gland epithelium, the origin cells are unknown [11, 12].

The mean age of occurrence in various literatures is 5-7 decade [9,10, 13,14]. However; the first case of ours which presented in 2nd decade defied the age range, the second case reported in the 7th decade was in conjunction with other studies. Although rare, but the ameloblastic carcinoma cannot be excluded if presented in younger population. Ameloblastic Carcinoma predominantly occurs in male populations [9, 13, 14,15]. Braimah et al reported almost two-third cases reported in male population [15]. The second case reported in our study was seen in a female patient. The most common site for occurrence of Ameloblastic Carcinoma is mandible. Both the cases were seen in Mandible. Soyele et al in their literature reported that Ameloblastic Carcinoma in Mandible is seen in 76.9% cases and 69.2% cases were reported in posterior mandible [14]. The most common clinical presentation of ameloblastic carcinoma is a facial swelling and pain. Other clinical presentation includes cystic lesion with benign clinical features or a large tissue mass with ulceration, bone resorption, and tooth mobility [16]. Both the cases were presented as swelling and pain. Radiological finding in Ameloblastic Carcinoma is deceptive; ill defined radiolucency was seen in 69.23% in a study [17]. Both the cases were presented as ill-defined radiolucency.

Histological presentation of Ameloblastic Carcinoma shows the architectural features of Ameloblastoma with features of cellular dysplasia, such as: pleomorphism, hyperchromatism, and abnormal mitotic figures with altered nuclear/cytoplasmic ratio. Squamous metaplasia and keratin pearl formation, clear cells and ghost cell can also be seen in Ameloblastic Carcinoma [18] Our case presented as Ameloblastoma with all dysplastic features. However, rare features such as clear cells, ghost cells were not seen in our cases.

Many proliferation markers had been used to di­agnose AC, especially, Ki-67, PCNA, and MCM pro­teins. Bello et al., in 2009 found that Ki-67 labeling index in Ameloblastic Carcinoma is three times that of Ameloblastoma [19]. Bologna-Molina et al. in 2013 studied PCNA and Ki-67 expression in AC and found that Ki-67 was a more specific marker for the proliferation of ameloblastic tumor cells [20].

Ameloblastic Carcinoma is a rare aggressive odontogenic neoplasm with high propensity of metastasis. Since it has wide variety of clinical and radiological presentation, histopathological confirmation of the lesion becomes mandatory. Since, due to rare incidence of the lesion, fewer lesions have been published. Our first case was reported in young male patient. The superficial lesion showed benign Plexiform pattern of Ameloblastoma but deeper lesion exhibit Ameloblastomic Carcinoma with lymph node metastasis. The second case was reported in older female patient and it presents as Ameloblastic Carcinoma. Since the lesion exhibit ameloblastoma with features of cytological atypia.