Low-grade gliomas are the most common primary brain tumors which affects the central nervous system (CNS), they causes considerable morbidity and represents a therapeutic challenge due to the heterogeneity of their clinical behavior. The objective of this study is to reclassify patients in TCGA databases according to the new 2016 WHO classification by identifying their genomics profiles, glioma CpG island methylator phenotype and studying their survival according to the status of the IDH1 gene. Data were obtained for low-grade gliomas patients from The Cancer Genome Atlas (TCGA), a total of 516 samples were analyzed by TCGA Biolinks R Bioconductor. Patients with astrocytomas had shorter overall survival than those with oligodendrogliomas, they are characterized by mutations in ATRX and TP53 and hypermethylation at the MYT1L and ELAVL4 genes, whereas patients with oligodendrogliomas have mutations in CIC and FUBP1 and hypermethylation at PLCG1 and STAB1 genes. The identification of these biomarkers will improve the diagnosis of low grade gliomas by completing the anatomical pathology tests.

Low-grade gliomas are primary brain tumors of the central nervous system (CNS), they are more common in adults and are characterized by a poor diagnosis. The differentiation between astrocytomas and oligodendrogliomas remains a major challenge in neuro-oncology because they have a similar morphological appearance and distinct biological and therapeutic responses [1].

The histological characteristics are insufficient to discriminate systematically between the two subtypes, that's why the 2016 update of the World Health Organization (WHO) CNS tumor classification represents a change in the diagnosis of brain tumors by integrating molecular and phenotypic characteristics into the classification of tumors and thus reducing the defined sub- groups. Among the genomic and epigenetic alterations associated with low-grade gliomas, the mutation of isocitrate dehydrogenase (IDH) and the glioma CpG island methylator phenotype (G- CIMP) respectively [2].

In this study, we analyzed the genomic profiles and CpG island methylator phenotype of patients downloaded from the Cancer Genome Atlas (TCGA) database. The identification of these biomarkers in our study could provide a new means of accurate diagnosis of low-grade gliomas.

The use data were downloaded from the TCGA database (https://gdc-portal.nci.nih.gov), including 516 LGG (low-grade gliomas) samples. Genomic data (Illumina HiSeq 2000) and methylation data (Illumina Infinium Human Methylation 450 BeadChip) was obtained by the TCGA biolinks R package (version 2.12.6) [5]. After normalization, 501 samples were retained for genomic data and 496 samples for methylation data. All clinical information about the patients was used for each type of tumor.

The ggplot2 package (version 3.2.1) [3] is used to describe the distribution of mutated genes within samples. Based on the new WHO 2016 classification, we reclassified all samples into astrocytomas and oligodendrogliomas using the maftools package (version 3.9) [4], by generating an oncolplot with all patients with their clinical information and the percentages of the most implicated mutated genes. We used the plot maf summary function to display the number of variants of each sample as a stacked bar chart and the types of variants as a boxplot. The titv function classifies the SNPs into transitions and transversions and returns the boxplot summary data indicating the general distribution of six different conversions. Stacked barplot showing fraction of conversions in each sample, and to identify genes that are mutually exclusive or co-occurring, the somatic interactions function that performs the fisher's exact pair test is used to detect such a significant genes pair. This function also uses cometExactTest to identify sets of potentially altered genes.

Finally, to estimate the survival function according to clinical data of the patients, we used TCGA analyze Survival KM package [5]. For the methylation data, we used TCGA Workflow Bioconductor (version 1.8.1) [5], we started by checking the average methylation of the DNA of the different groups of samples (astrocytomas and oligodendrogliomas) through the TCGA Visualize_MeanMethylation function, then the differentially methylated regions were visualized using heat maps by the ComplexHeatmap software (version 2.0.0) [6].

In order to show the distribution of genes within our data from the TCGA database, we used the ggplot2 package. The asymmetric forms of kurtosis indicates that the genes vary from patient to patient and we see that some genes are more present than others (Figure 1). 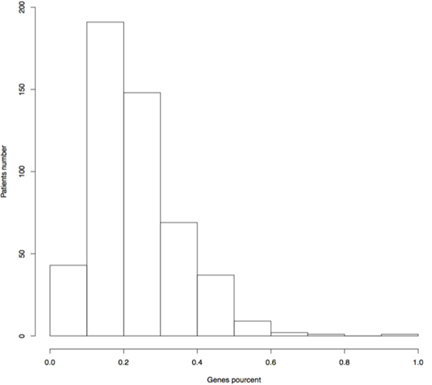 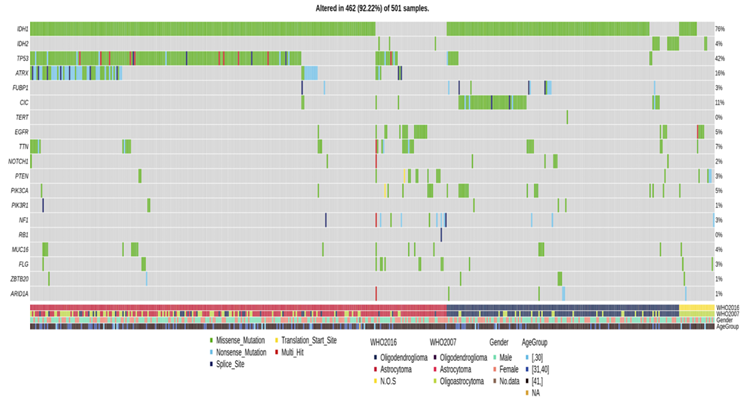 Figure 2: Mutational alteration of 501 Samples that have low-grade gliomas 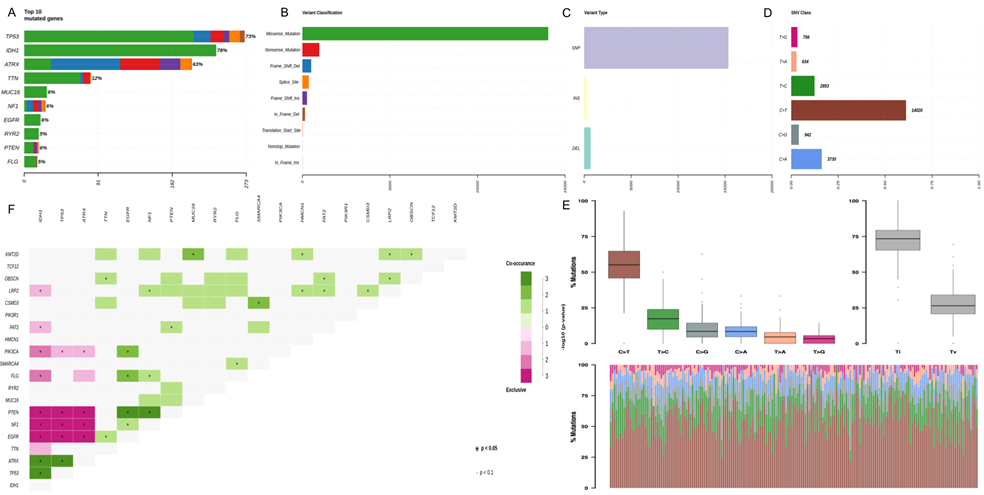 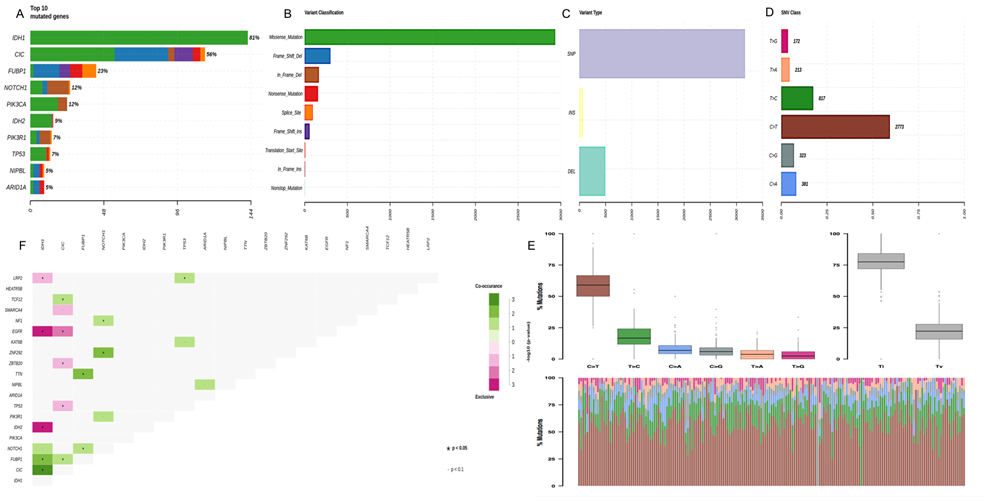 The generation of the matrix (Figure 3F and Figure 4F) which shows the interaction between genes based on the cumulative binomial distribution function, takes into account both the length of the genes and the total number of mutations in the genes identified as potentially significant for the seed to cluster them together. A score is calculated for each cluster, the green indicates a tendency to co-occurrence, the rose has the tendency to exclusivity [7]. In the case of patients with astrocytomas, the genes that have a significant co-occurrence of P<0.05 are: IDH1-TP53; IDH1-ATRX; ATRX-TP53; PTEN-EGFR; PTEN-NF1 then the exclusive genes that presenting a significance of P<0.05 are : IDH1-PTEN; IDH1-NF1; TP53-EGFR; ATRX-PTEN; TP53-NF1.

To estimate patient survival, we used Survival KM package, our analysis of the clinical data showed that people with astrocytomas had shorter overall survival than those with oligodendrogliomas (Figure 5A). Specifically, patients who have an IDH1 mutant have a longer survival than those who have an IDH1 wild type and this is true for astrocytomas and oligodendrogliomas (Figure 5B, C).

Figure 5: Kaplan–Meier estimates of overall survival among patients with astrocytomas and oligodendrogliomas that are classified according to IDH mutation and IDH wild-type status. 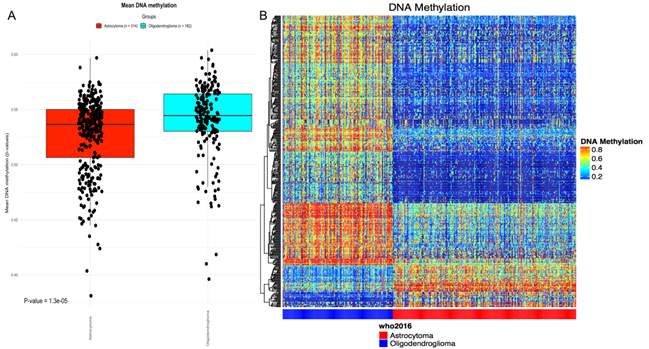 In this report, our analysis of genomic low-grade glioma data from the TCGA database were based on the 2016 WHO classification. All patients who had a 2007 WHO classification were reclassified into two types of tumors (astrocytomas and oligodendrogliomas), contrariwise the oligoastrocytomas profile was eliminated. Patients who do not present classification biomarkers such as TP53, ATRX, CIC and FUBP1 have been named NOS (not otherwise specified) whose diagnosis is not complete which insists to resequenced to better characterize their genomics profiles. For IDH1, it is a common gene between the two types of tumors. In the case of a mutation, it catalyzes the conversion of alpha-ketoglutarate to beta-hydroxyglutarate (2-HG) [8,9]. Since the structure of 2-HG is similar to that of α-KG, 2-HG inhibits a variety of α-KG-dependent dioxygenases [10,11]. Among them, Ten-Eleven Translocation-2 (TET2) induces global demethylation of DNA by catalyzing the conversion of 5-methylcytosine (5-mC) to 5-hydroxymethylcytosine (5-hmC). Forced mutant IDH1 caused increased 5mC concentrations, instead of decreased 5hmC [12]. IDH mutation also promotes methylation of DNA by TET2 inhibition, resulting in a glioma CpG island methylator phenotype (G-CIMP).

Figueroa ME et al [13] and Turcan S et al [14] demonstrated that the G-CIMP phenotype in glioblastoma is formed after the introduction of an IDH1 mutation in normal human astrocytes, indicating that the mutant IDH induced suppression of TET2, followed by G-CIMP, in cancer cells. Consistent with patients with mutant IDH gliomas, patients with G-CIMP gliomas are younger at diagnosis and survive longer than those without G- CIPM [13,14]. Intriguingly, about 10% of G-CIMP tumors were relapsed as G-CIMP low tumors with poor clinical outcome [15].

For astrocytomas, we find TP53 and ATRX. The wild type TP53 gene has an essential role in several cellular processes, including tumor suppression, apoptosis, DNA repair and autophagy suggesting that the mutation at the TP53 level is defined by a loss of P53 protein function [16].

Inactivation of ATRX in gliomas may be due to mutations, deletions, gene fusions or an amalgam of these causes [17]. For oligodendrogliomas there is the presence of genes CIC and FUBP1, CIC is a transcriptional repressor that counteracts activation of genes downstream of Receptor Tyrosine Kinase (RTK)-Ras-Extracellular signal-regulated kinase (ERK) signaling [18], and FUBP1 gene has a putative tumor suppressor role in oligodendrogliomagenesis [19]. The prevalence of IDH mutations in lower-grade gliomas prompts the targeting of the mutant enzymes themselves or their downstream metabolic and epigenomic consequences, such as G-CIMP especially since patients with astrocytomas exhibit hypermethylation at the level of genes MYT1L a transcription factor that plays a key role in neuronal differentiation by specifically repressing the expression of non-neuronal genes, Wong KK et al [20], have shown that this gene directly suppress the expression of YAP1, a protein that promotes the proliferation and growth of glioblastomas, when hypermethylated it loses its functioning [20]. The hypermethylated ELAVL4 gene is also found in astrocytomas, Huang S et al [21] have indicated that during neuronal differentiation, ELAVL2, ELAVL3 and ELAVL4 induced an alternative polyadenylation of HuR (human antigen R) and consequently suppressed its translation, leading to a non-proliferative state. In the glioblastomas scenario, there is a hypothesize that downregulation of ELAVL2, ELAVL3, and ELAVL4 may be preferred to further enhance the translation of HuR, leading to a less differentiated and highly proliferative state of cancer cells [21]. On the other hand, patients with oligodendrogliomas are characterized by the presence of PLCG1 which allows the production of diacylglycerol and inositol 1,4,5-trisphosphate (IP3). Su Y et al [22] revealed that this reaction uses calcium as cofactor and plays an important role in intracellular transduction of tyrosine kinase activators, and also STAB1 which encodes a protein that binds nuclear matrix and scaffold DNAs through a single nuclear architecture [22]. Cancer Genome Atlas Research Network [23] have shown that the protein recruits chromatin remodeling factors to regulate chromatin structure and gene expression, hypermethylation of these genes leads to the reduction of this activity [23].

Our integrative gene analysis with G-CIMP status showed that both subtypes of low-grade gliomas have some common point such as IDH1 mutation or EGFR-IDH1 exclusivity, but also points of divergence as some number of genes mutated as ATRX for astrocytomas or CIC for oligodendrogliomas, also at the level of hypermethylated genes that encode proteins such as the MYT1L gene for astrocytomas and the PLCG1 gene for oligodendrogliomas. The integration of clinical data in the analysis for the study of the patient's survival has shown that patients who mutated IDH1 have a longer survival compared to patients with the wild status of the IDH1. This study has some limitations, the data analysis was based on a bioinformatics algorithm using public TCGA data and no further experimental validation was conducted, in contrast many studies have shown that histopathological classification of low-grade gliomas is subject to strong interobserver variation, this provides insights into identifying additional biomarkers that will complement histopathological and neuroimaging diagnostics to develop a treatment strategy for each patient.

The prevalence of the mutated IDH gene in low-grade gliomas insists on targeting either the mutant enzymes themselves or their downstream metabolic and epigenomic consequences, such as G-CIMP. The ATRX, CIC, FUBP1, TP53, NOTCH1 and EGFR mutations are also involved in gliomagenesis, but their specificity and prevalence in low-grade gliomas with an IDH mutation argue for further characterization of the associated signaling networks to improve the diagnosis. These biomarkers lend themselves to a classification system based on biology and practice, which must improve the concordance between observers. This type of system also seems likely to reduce the diagnosis of oligoastrocytoma and the confusion that could result and develop new therapeutic strategies in an early stage before the malignant transformation.

This work was carried out under National funding from the Moroccan Ministry of Higher education & Scientific research (PPR program) to AI. This work was also supported by a grant from the NIH for H3Africa BioNet to AI and Institut Research of the Foundation Lalla Salma, and scholarship of excellence from National Center for Scientific and Technical Research in Morocco.

The authors declare they have no competing financial interests.