Citation: Maryam Naser, Seyed Mohammad Masoud Shushtarian. Amplitude and Latency of Electroretinographical Peaks as a tool to Predict the Extent of Retinal Degeneration in Retinitis Pigmentosa Patients. Journal of Ophthalmology and Research 3 (2020): 71-74.

Retinitis Pigmentosa (RP) is a disease of visual system which causes loss of vision. Proper diagnosis of this disease is important as far as ophthalmologists and patients are concerned. The aim of present study is to use amplitude and latency of Electroretinographical Peaks a and b to diagnose the extent of retinal degeneration in RP patients. A population of 100 subjects was selected for the purpose of this study. Fifty subjects with normal visual system mainly retina were considered as a control group. Along with control group, 50 patients pre-diagnosed as RP were selected as a case group. Electroretinography was examined in total population. The results obtained were compared together to look for the possible changes in two groups which showed changes in amplitude and latency of ERG a and b peaks of case group in comparison to control population. It can be concluded that amplitude and latency of ERG, a and b waves can be helpful to predict the extent of retinal degeneration in RP patients.

Retinitis Pigmentosa (RP) is an inherited retinal disease which degenerates the photoreceptors in periphery and spreads to entire retina. The RP patients experiencing a tunneling type of vision and decreased visual field that can cause blindness [1]. Electroretinography (ERG) is one of the most common technique which indicates the retina function in patients with eye problems [2]. ERG is consist of different peaks among which a and b waves are clinically more important [3]. a wave of ERG raises from rods and cones photoreceptors and b wave is the projection of bipolar and Muller cells of retina. The aim of present study is to look for different types of ERG patterns irrespective of the site of retinal layers concerned and try to predict the extent of retinal degeneration in RP patients.

Hundred subjects were selected for the purpose of present study. The subjects were classified in two groups. Control population contains 50 subjects with healthy visual system mainly retina. Case group was selected from RP patients with different involvement of retinal degeneration. The total populations were checked by routine ophthalmological diagnostic techniques. Routine ophthalmoscopy, slit lamp and retinoscopy were used for this purpose. Finally electroretinograghy (ERG) was tested in total population. Amplitude (μv) and latency (msec) of b wave of ERG were measured in total population and a wave was taken into consideration qualitatively. The ERG waveform of the patients were classified in three groups according to a and b waves which will be discussed.

The result in table includes the mean amplitude/S.D. and latency/S.D of ERG b wave in case and control groups which shows the difference between amplitude and latency in two groups are statistically (p< 0.05).

Graph 1, is the sample ERG patterns in following cases: 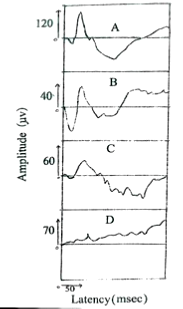 Retinitis Pigmentosa with the prevalence of one case in each 2500-7000 persons, is one of the most common causes of blindness in 20 to 60 year-old people [6]. Patients have pathological changes in macula and the periphery which cause abnormal electroretinograms. ERG shows functional status of the retina photoreceptors by measuring electrical potential after light stimulation [7]. We studied on PR patients using ERG to see if changes in waves can help to predict degeneration of retina. Table 1 is the mean amplitude and latency of b wave of ERG versus standard deviation in case and control groups. As it is observed in table 1 the amplitude of b wave is reduced and in other hand the latency of b wave of ERG is increased in case in comparison to control group. The large standard deviation in case group is due to different stage of retina degeneration. So, we classified the total ERG wave form in three major groups. As graph shows, the first sample wave form is in normal subjects as far as visual system mainly retina is concerned. The second sample wave form is in case of a RP patient. This wave form is to some extent similar to sample healthy subjects and the only difference is the reduction of amplitude of b wave of ERG pattern but not latency.

This type of pattern is an indication of early stage of RP disease i.e. the periphery of retina is only degenerated and the patients of this stage complaining from night blindness only [4]. Third sample ERG wave form shows that amplitude of ERG b wave is once again reduced and more over the latency of b wave is increased. In such cases

a wave is also small compare to normal sample ERG wave form [5]. Such type of pattern is observed in RP patients with degeneration of retina to larger extent. These patients usually complain from tunneling vision i.e. approximately the rods and cones or in other word photoreceptors are degenerated. Finally, last ERG wave form is the sample ERG pattern with somehow flat shape or in best condition slight b wave is observed but a wave is absent. The patients with such type of pattern hardly see anything and it is the severe stage of retinal degeneration.

From the result of present study, one can conclude that ERG wave form in RP patients can be classified in three groups.