Background: We report a case of spontaneous reported hypersensitivity in ultra-early phase in normal tension glaucoma in a Japanese professor in a medical school.

Case Presentation: At 66 years of age, the patient spontaneously noticed subjective symptoms, such as scotoma, in the visual field in the temporal lower position in the right eye while he examined his electronic microscopy (EM) study images. A slit lamp examination during the first visit to our hospital revealed a typical localized glaucomatous retinal nerve fiber layer defect in red-free filter examination and glaucomatous optic nerve head damage with 0.8 of cup-to-disc ratio and rim thinning and excavation. Moreover, optical coherence tomography examination of his optic nerve and macula (ILM-IPL/INL) revealed thinning of the retinal ganglion cell layer, especially in the right eye in which he had noticed the symptom. Furthermore, Humphrey automated perimetry was performed on the same day, confirming scotoma in the right eye coinciding with his spontaneous subjective symptom.

Conclusion and Importance: Glaucoma is normally asymptomatic and medical treatment is often delayed owing to the lack of subjective symptoms in the early phase. However, in this case, the patient’s careful and sensitive personality enabled spontaneous subjective identification in the ultra-early phase of normal tension glaucoma.

Glaucoma is the leading cause of irreversible blindness, affecting approximately 4 million people in Japan [1]. Although open angle glaucoma, including normal tension glaucoma (NTG), is considered the most common type of glaucoma in the Japanese population, 92.3% of these eyes can demonstrate intraocular pressures (IOPs) within the normal range [2]. Recently, the probability of patients with NTG progressing to unilateral blindness, and bilateral real blindness was reportedly 9.9% and 1.4% at 20 years, respectively [3]. Several large-scaled mesoscale clinical trials have investigated the natural history of untreated eyes with NTG [4,5]. A previous study demonstrated the rate of progression of visual field defects (VFDs) to vary between −0.2 and −2 dB/year [4], while another study demonstrated an average of −0.36 dB/year [5]. De Moraes et al reported that it averaged −0.33 dB/ year in their group of 81-treated NTG patients [6]. Importantly, several studies have suggested that the rate of VFD progression varies according to the patients’ eyes, distribution of glaucoma subtypes [7], and severity of VFD at presentation [8].

Herein, we report a case of ultra-early phase NTG detection in a Japanese man based on the self-examination of his electronic microscopy (EM) study images. He was a prominent professor in a medical school. His careful and perceptive personality could have promoted subjective spontaneous notification in the early phase NTG, which enabled early intervention and prevention of the visual field (VF) loss.

The patient was a 66-year-old man with no relevant history of any systemic disease excluding a history of hypertension since 10 years. The patient was a prominent professor in a medical school. He spontaneously noticed subjective symptoms, such as scotoma in the temporal lower position in the right eye, in the VF while he examined his EM study image. The visual acuity in the right and left eye was 1.2 × -0.75 D = cyl -0.75 D Ax 70°, and was 1.2 × -2.00 D = cyl -0.75 D Ax 110°on the first refer, respectively. The IOP was also measured using a non-contact tonometer (NT-4000; NIDEK Co., Ltd, Japan), and the IOP in the right and left eye was 15 mmHg and 17 mmHg, respectively.

Upon slit lamp examination during the first visit of our hospital, a typical localized glaucomatous retinal nerve fiber layer defect in red-free filter examination and glaucomatous optic nerve head damage with 0.8 of cup-to-disc ratio and rim thinning and excavation were observed (Figure 1). On the same day of the examination, the bilateral optical coherence tomography (OCT) was performed. Upon the fundus OCT examination, his optic nerve and macula (ILM-IPL/INL) exhibited thinning of the retinal ganglion cell layer especially in the right eye in which he noticed the symptom (Figure 2). Moreover, Humphrey automated perimetry was performed on the same day. Early-stage scotoma in the VF in the right eye was confirmed coinciding with his spontaneous subjective symptom (Figure 3). A diagnosis of bilateral NTG was formulated. The eyes were bilaterally administered prostaglandin analogs of 0.005% Latanoprost, and successfully resulted in the IOP decrease into 14 mmHg in the right eye and 13 mmHg in the IOP in the left eye.

Figure:1 Graph illustrating the first visit to our hospital, a typical localized glaucomatous retinal nerve fiber layer defect in red-free filter examinations and glaucomatous optic nerve head damage with 0.8 of cup-to-disc ratio and rim thinning and excavation were observed both in the right eye (A) and the left eye (B) 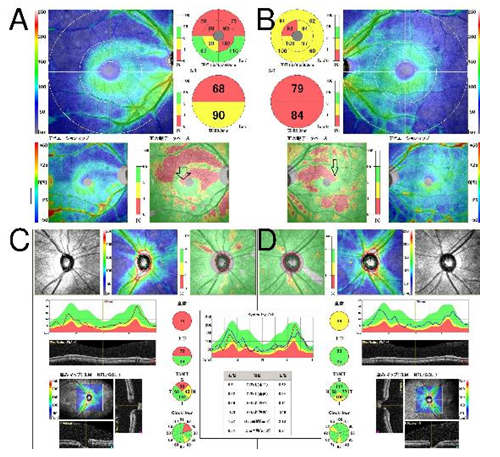 Figure 2: Representative image of the optic nerve and macula (ILM-IPL/INL) exhibiting thinning of the retinal ganglion cell layer, especially in the right eye (A and C) in which the patient noticed the symptom, in addition to the left eye (B and D). 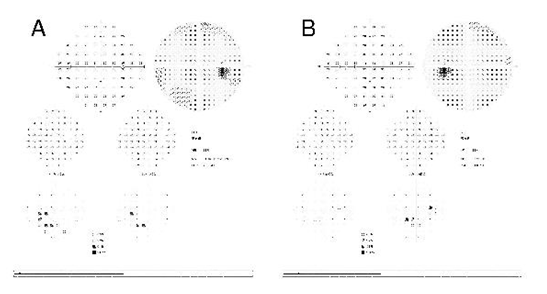 Several studies have elucidated the rate of VFD progression in glaucoma patients. However, in the case of NTG, comparison of studies is challenging owing to the variations in the data according to the race, follow-up periods [12], frequency of VF testing, grade of VF, and study design concerning the inclusion criteria and research methodology. In medically treated NTG eyes, the mean rate of VFD progression reportedly varied between −0.38 and 0.02dB/year [13–16]; however, previous studies enrolled eyes with mild NTG and variable severities of VF, with the exception of advanced glaucoma.?

In initially NTG eyes, a previous study [9] reported the rate of VF progression to be −0.23 dB/year and +0.11 dB dB/year in a progressive and non-progressive group, respectively. Their findings are largely consistent with our present findings; however, our cases included both treated and non-treated NTG eyes. Thus, the subjective spontaneous notification in the early phase of NTG in the present case report enabled early intervention and the prevention of VF loss. Although the incidence of disc hemorrhage (DH), which was not observed in our patient, was previously reported to be 11–42% in eyes with NTG [17], a higher incidence of DH in our eligible population could be partly explained by the fact that the DHs are usually not observed in far-advanced glaucoma in which little of the neuroretinal rim is preserved [19]. Moreover, studies with longer follow-up periods [10] and fewer cases needing intensive therapy in our population could strengthen the reliability [20, 21].

Whether greater IOP fluctuation is a risk factor TG progression is considered controversial [22–24]. A more progressive intervention, including surgical intervention, such as for patients with advanced glaucoma, yields an unavoidable bias, especially in retrospective studies. Thus, some investigators use IOP values only prior to the development of an event when investigating the risk factors for glaucoma progression [22–24]. In summary, we demonstrated that the rate of VFD progression in the glaucoma is generally asymptomatic, thereby resulting in delayed medical treatment. However, in this case, the careful and perceptive personality of the patient enabled the subjective spontaneous notification in the ultra-early phase in NTG.

We thank Y. Ieki and Y. Setoguchi, whose discussions, advice, and criticisms were of great benefit to this report. This study was supported in part by Research Project Grant 03B-002 from the Kawasaki Medical School (to H.F.). The author has no proprietary or commercial interest in any of the materials discussed in this article.