Purpose: To compare the efficacy and safety profile of deep sclerectomy combined with Ex-PRESS shunt versus Ex-PRESS shunt surgery in eyes with neovascular glaucoma. Methods: Patients with neovascular glaucoma secondary to proliferative diabetic retinopathy who underwent Ex-PRESS glaucoma filtration surgery with or without deep sclerectomy were evaluated retrospectively. Twenty eyes with neovascular glaucoma secondary proliferative diabetic retinopathy were included in our study. Intravitreal bevacizumab injection and panretinal photocoag-ulation were applied to these eyes. Iris and angle neovascularization were achieved preoperatively. In spite of full antiglaucomatous treatment whose intraocular pressures were 21mm Hg and above were taken to surgery. Patients were randomly divided into two groups. Group A (10 patients) underwent deep sclerectomy combined with implantation of Ex-PRESS drainage device, group B (10 patients) underwent only Ex-PRESS glaucoma filtration surgery. Primary outcome measurements were intraocular pressure (IOP) and the number of antiglaucomatous medications at the first year follow up visit. Results: There was no difference in IOP between the groups at the first 2 months postoperatively (p>0.05). There was no need for antiglaucomatous medication in all groups in the first 2 months. Antiglaucomatous medication was administered to 2 patients in group A and to 4 patients in group B in the third month. IOP values were lower in group A than group B at the third and sixth months (p<0.05). At the end of the first year, ≤18 mm Hg IOP rate was found 80% in group A and 60% in group B without medication. Conclusions: Ex-PRESS shunt surgery demonstrated to be an effective treatment in eyes with neovascular glaucoma at the first year follow-up period. Ex-PRESS drainage device implantation with deep sclerectomy increased surgical success.

Blindness in diabetic patients is a consequence of proliferative diabetic retinopathy, while neovascular glaucoma is responsible for approximately 5% of blindness in diabetics. When vascular proliferation occurs, it primarily appears at the pupillary border, but it can be seen first in the anterior chamber angle. Vessels run from the base of the iris and cover the ciliary body band, scleral spur, and finally the trabecular meshwork. This causes intraocular pressure (IOP) elevation commonly. Intraocular pressures may rise to 40-60 mm Hg. [1]

The Ex-PRESS P-50 model used in our study was 2.6 mm long with a 50 µm internal diameter. Ex-PRESS is a valveless, stainless steel glaucoma drainage device. Ex-PRESS glaucoma drainage device implantation supplies better postoperative perform-ance and is safer than trabeculectomy alone in neovascular glaucoma. The usage of adjuvant theraphy such as bevacizumab also affects the success of surgeries. [2-4]

Bevacizumab is a humanized monoclonal antibody and binds to all isoforms of vascular endothelial growth factor (VEGF)’s. VEGF causes proliferation in endothelial cells and this leads to formation of new blood vessels. Bevacizumab blocks the interaction between VEGF-A and its receptors on the surface of endothelial cells, which initiates the intercellular signaling pathway. It has been reported that iris neovascularization regresses after intravitreal bevacizumab injections. [5, 6]

This study was performed in accordance with the Declaration of Helsinki and Lokal Ethics Committee approved the protocol for the study (E1-20-1382). Written informed consent was obtained from all patients. Twenty eyes of 20 diabetic patients with neovascular glaucoma secondary to proliferative diabetic retinopathy were included in our study. Argon laser panretinal photocoagulations were applied to the patients.  An intravitreal injection of 0.05ml bevacizumab (Altuzan 100mg/4ml, Roche) was performed 7 days before the surgery. 0.3 mg / ml bimatoprost and 6.8 mg / ml timolol maleate drug combination, 10 mg / ml brinzolamide and 1.5 mg / ml brimonidine tartrate antiglaucomatous drugs were administered. Despite full antiglaucomatous treatment and iris, angle neovascularization regression whose intraocular pressures were 21 mm Hg and above were taken to surgery. Patients were randomly divided into two groups. Patients with ocular trauma history and other intraocular surgery were excluded to the study. All surgeries were performed by the same experienced surgeon (CZF). Ex-PRESS glaucoma drainage device implantation was performed with deep sclerectomy in some of the patients (Group A), and Ex-PRESS glaucoma drainage device implantation surgery without sclerectomy was performed in the other part (Group B).

Postoperative examinations were held in 1st week, 1st, 2nd, 3rd, 6th months and first year. Complete surgical success was determined as an eye with IOP ≤18 mm Hg but without medication. Partial surcical success was determined as IOP ≤18 mm Hg with decreased number of antiglaucomatous drugs needed. IOP below 7 mm Hg was accepted as failure criteria because of hypotonia. IOP was measured in the morning using applanation tonometry.

Deep sclerectomy with Ex-PRESS (Alcon Laboratories, Fort Worth, TX, USA) filtration device P-50 model implantation: Fornix-based conjunctiva and tenon's membrane dissection was performed. 5×5 mm2 in size one-third of the scleral thickness superficial scleral flap was dissected at 12 o'clock until the transparent cornea. Triangular sponge soaked with Mitomycin-C (MMC) (0.2 mg/mL) is placed under the superficial scleral flap for 2 minutes then irrigated by 20 ml balanced salt solution (BSS). Later, a 4×4-mm2 deep sclera flap is fashioned to create a trabeculodescemet membrane. The extent of the excision is up to the Schlemm’s canal. A 4 × 4 mm2 deep scleral flap is then shaped up to the Schlemm canal to create a trabeculodesemet membrane. The deep flap is excised. Schlemm’s canal outher wall was extracted and aqueous percolation ‘’oozing’’ occured. The anterior chamber is entered with a 25 G needle under the scleral flap parallel to the iris plane and an Ex-press drainage device (P50 model) is placed. The superficial scleral flap was sutured to the sclera with 10-0 nylon sutures at the two corners. After controlling the presence of flow by applying BSS to the anterior chamber, the tenon and conjunctiva were sutured continuously with 8-0 vicryl suture.

Ex-PRESS filtration device implantation: The surgical procedures are the same, only deep sclerectomy was not performed. A 25 gauge needle is inserted to the anterior chamber parallel to the iris plane at the center of the blue line. Ex-press drainage device (P50 model) was implanted from this point. All data were entered into SPSS ( version 17) Windows 15.0. Mann-Whitney U test was used for statistical analysis. All parameters used in our study is written as mean ± standard deviation (SD).  Significance level was taken as p<0,05.

Complete success rate has been determined as 80% for group A and 60% for group B at the end of first year. Partial success rate is evaluated as 20% in group A and 40% in group B (p=0.04).  Needling was applied to two patients in group B in the second month. In the third month, 10 mg / ml brinzolamide treatment was initiated in 2 patients in group A and 4 patients in group B, and IOP measurements were achieved to be 18 mm Hg and below. Following these postoperative additional treatments no failure was observed in either group at the end of first year. Shallow anterior chamber, hypotony, choroidal detachment, contact between the device and iris or corneal endothelium were not encountered after the surgery. Spontaneously absorbed grade 1 hyphema developed in one patient in each group (Figure 1). 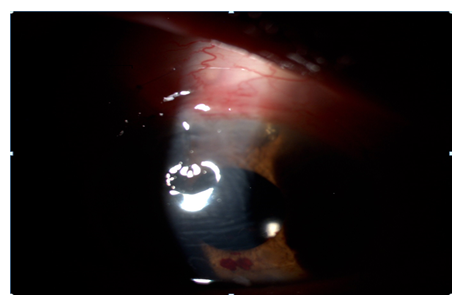 Figure 1: Coagulum and neovascularization is seen at the lower edge of the pupil and Ex-press shunt is observed in the superotemporal region at the first postoperative day

None of the authors has any conflict of interest.

The authors do not have any funding support for the study.