Although tubulointerstitial nephritis with uveitis (TINU) is a rare disorder that represents only 1-2% of all uveitis cases in tertiary care settings, it remains a common diagnosis among children and adolescents [1, 2]. Among young individuals with uveitis, up to one-third may have TINU [1, 3]. The condition most often presents as an acute, bilateral, non-granulomatous anterior uveitis [4, 5]. However, TINU may present with findings beyond the anterior segment [1, 6, 7]. In this report, we present an example of such a case.

Although tubulointerstitial nephritis with uveitis (TINU) is a rare disorder that represents only 1-2% of all uveitis cases in tertiary care settings, it remains a common diagnosis among children and adolescents [1, 2]. Among young individuals with uveitis, up to one-third may have TINU [1, 3]. The condition most often presents as an acute, bilateral, non-granulomatous anterior uveitis [4, 5]. However, TINU may present with findings beyond the anterior segment [1, 6, 7]. In this report, we present an example of such a case.

A 12-year-old otherwise healthy girl presented to our center as an urgent referral due to concern for active bilateral non-granulomatous anterior uveitis and bilateral Frisen grade 3 [8] optic disc edema. Her symptoms had started two months prior. She had been treated with prednisolone acetate drops with escalation to difluprednate drops without any significant improvement. She and her family denied any preceding symptoms including headache, fever, chills, joint pains, and rashes. On her initial evaluation, her best-corrected visual acuity was 20/25 in both eyes. Her clinical examination demonstrated 4+ cells in the anterior chamber with bilateral posterior synechiae and 360° blurring of the optic disc margin. Retina fluorescein angiography revealed dye leakage from both optic discs without retinal vessel leakage (Fig. 1).

The diagnostic work-up included a normal complete blood count, a normal creatinine of 0.48 mg/dL (glomerular filtration rate = 138 ml/minute per 1.73 m2) and no protein or blood on urinalysis. Her beta-2-microglobulin level was elevated to 2,275 mcg/g (normal range < 132 mcg/g). She was therefore referred to the nephrology service and underwent a renal biopsy that demonstrated tubulointerstitial nephritis and mild tubular interstitial edema (Fig. 2). Given her constellation of symptoms, she was diagnosed with TINU and treated with intravenous methylprednisolone for 3 days due to the presence of disc edema and potential vascular occlusion. 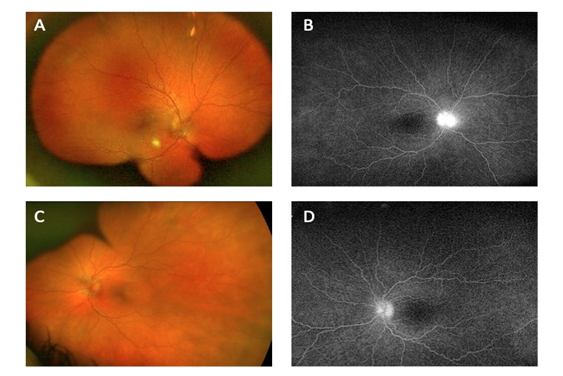 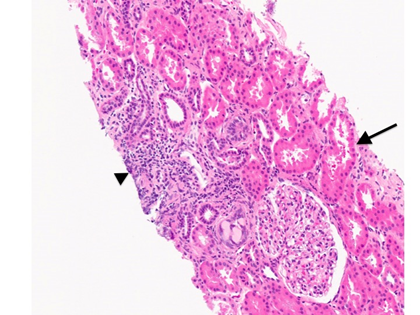 On discharge, she was prescribed a regimen of oral prednisone 0.2 mg/kg twice a day, oral methotrexate 15 mg once a week, and subcutaneous adalimumab 40 mg once every 2 weeks. Her topical regimen was topical steroids and cycloplegic agents. At last follow-up at 3 months, the anterior uveitis was quiet and the papillitis had resolved with improvement in her beta-2-microglobulin level to 185 mcg/g. She remained on systemic immune modulatory therapy as well as a slow oral prednisone taper due to an increase in beta-2-microglobulin to 225 mcg/g during an attempt at a more rapid taper.

In 1975, Dobrin et al. first described TINU as a disease that causes both interstitial nephritis and primarily a bilateral anterior uveitis [4]. In the initial criteria for TINU established by Mandeville et al. in 2001, TINU is categorized as “Definite”, “Probable”, and “Possible” based on the presentation of anterior uveitis as well pathologic and laboratory findings [5]. Since then, a total of almost 600 cases of TINU have been described in the literature [9]. This has helped clarify previously established understandings of this disease entity including its ocular findings.

While there is no known racial or ethnic predisposition, TINU does remain a more common diagnosis among individuals younger than 20 years old. For instance, Mackensen et al. found that TINU was nearly seven times more common in children and adolescents with a median age at diagnosis of 15 years old [1]. In most cases, TINU presents as an acute, bilateral, non-granulomatous anterior uveitis; however, recent studies have shown that TINU can also present with a myriad of findings in the posterior segment. In a review of 133 cases, Mandeville et al. found that 20% of patients with known ocular complications of TINU had optic disc edema [5, 10-16].

A recent retrospective study found posterior segment findings in 65% of 17 patients diagnosed with TINU. Among them, 41% had disc edema similar to the patient presented in this report, 24% had macular edema, and 12% had retinal vasculitis [6]. The case we describe here of optic disc edema in the setting of anterior uveitis serves as a reminder of the limitations of the initial diagnostic criteria for TINU and emphasizes the importance of keeping a broad differential diagnosis when uveitis patients present with posterior segment findings.

The authors declare no potential conflicts of interest with respect to the research, authorship, and publication of this article.

This work was supported by NIH CORE Grant P30 EY08098 to the Department of Ophthalmology of the Eye and Ear Foundation of Pittsburgh and by an unrestricted grant from Research to Prevent Blindness, New York, New York