A mucinous cystic neoplasm (MCNs) of the pancreas is an uncommon tumor that occurs mostly in females and are potentially sex hormone-sensitive. However, a MCN occurring during pregnancy is quite rare. A 25-year-old woman in the 35 week of gestation was referred to us because of a left flank pain. After unsuccessful treatment for pyelonephritis, a MRI revealed a large intra-abdominal cystic lesion. The patient subsequently underwent cesarean delivery and latter had tumor resection with distal pancreatectomy and splenectomy. Histopathological revealed a pancreatic MCN with low grade dysplasia. Our case strongly indicates the importance of further evaluation for uncommon causes for left flank pain.

Mucinous cystic neoplasms (MCNs) of the pancreas is an uncommon tumor characterized by a proliferation of mucin-producing columnar epithelium, comprise about 23% of all cystic neoplasms[1]. Most pancreatic cystic neoplasms  are detected incidentally when abdominal imaging is performed for other indication [2]. MCNs are usually slow-growing tumors, almost exclusively occur in women and are female-hormone dependent, thus pregnancy may increase their size [3, 4]. The incidence of invasive carcinoma (adenocarcinoma) associated with MCN in pregnancy is 30% [5].

A 25-year-old woman, G3P2, was referred to our center at 35 weeks of gestation due to left flank pain with no fever or urinary symptoms. Her past medical history was unremarkable. On her admission to our medical center, her vital signs were normal the abdomen was soft with normal uterine tonus and left flank tenderness, vaginal examination revealed unfavorable cervix. Her laboratory exams showed no leukocytosis or electrolyte abnormalities but her urine was with leukocyturias. Fetal heart rate monitoring and biophysical profile were normal with no signs of uterine activity. Abdominal ultrasound demonstrated normal urinary tract. Considering all the above and due to her impressive distress, she was admitted with the diagnosis of pyelonephritis for intravenous antibiotic treatment and pain relief medications. On the following days, due to insufficient clinical improvement and negative pre-treatment urine culture, the possibility of adrenal infarct or hemorrhage was raised and a magnetic resonance imaging was performed. The MRI demonstrated splenomegaly up to 16 cm with close 9*8.7 cm cyst in the distal pancreas with septations and suspected small cysts within it (Figure 1). The cyst was compressing the splenic vein almost completely and there were signs of thrombus in the splenic and the right portal veins and varicose in the upper left abdomen.

These findings were very suggestive of MCN. The differential diagnoses were solid pseudo-papillary tumor, Hydatid cyst and Echinococcal cyst. Tumor panel showed mildly elevated CA125 - 43.6 U/ml (upper limit - 35) and CA 15-3 – 38.1 U/ml (upper limit - 30). Echinococcus antibodies were negative. After an extensive multi-disciplinary discussion, in order to refrain from increase intra-abdominal pressure during labor and because of the malignant potential of the cyst and the potential excessive bleeding during combined cesarean delivery and splenic/pancreatic surgery, a separated cesarean delivery and open distal pancreatectomy and splenectomy were schedule three weeks apart (Figure 2). At 37th weeks of gestation, a 3080-gram male was delivered with normal Apgar scores. Both ovaries were of normal appearance and size. Post-delivery CT scan also supported the suspected diagnosis of MCN. Three weeks following the delivery an open distal pancreatectomy and splenectomy were performed the findings are described in Figure 2. The post-operative course was uneventful and the patient was discharged at the tenth postoperative day. The pathology confirmed a 6*8*9 cm MCN and low grade dysplasia, an ovarian like stromal was present. She is currently followed-up by the general surgery department at our center and is doing well without need of further treatment (1 year following the delivery).

The presence of ovarian like stromal emphasizes that pancreatic MCN is female-hormone dependent which may explain the occurrence of symptoms during the late pregnancy [5]. Our case underlines the fact that obstetricians should remain aware of the differential diagnosis of left flank pain. If no sign of renal cause is evident, further investigations including laboratory analysis and imaging should be performed to search for the underline uncommon etiology. This further highlights that a multidisciplinary approach including a maternal-fetal medicine specialist, hepatobiliary surgeon, hematologist and an anesthesiologist is of utmost importance in the management of these rare phenomena. 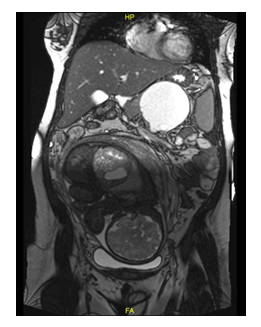 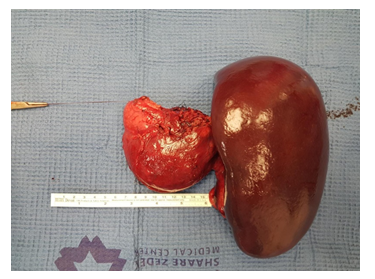 Patient consent form has been completed and signed by the patient.

All authors have no conflict of interest or benefit that has arisen from the direct applications this research to disclose.

None of the authors have any direct or indirect financial incentive associated with publishing the article.