Conclusion: MPG and PHT modestly predict 3-dimensional MVOA. However, only combining the information of MPG and PHT with patient’s HR and regurgitation allows reliable prediction of MVOA.

We retrospectively included consecutive patients undergoing interventional edge-to-edge mitral valve repair (MitraClip-NT devices, Abbott, Chicago, Illinois, U.S) at our center between May 2018 and April 2019. Patients with moderate-severe or severe MR, symptomatic despite guideline-directed optimal medical therapy were included and evaluated by a multidisciplinary Heart Team. Otherwise, no specific in- or exclusion criteria were applied. Both patients with functional and degenerative mitral valve regurgitation were eligible. All patients with TOE assessment prior and during interventional therapy were included. Patients with insufficient image quality or incomplete image acquisition, not allowing for complete assessment of all intended variables were excluded. The study was approved by the local ethics committee (19-8721-BO).

Echocardiographic assessment was performed on an Epiq 7C system equipped with a X8-2 probe (Philips Healthcare, Amsterdam, the Netherlands) providing a range frequency of 2.0–8.0-MHz and both 2D and 3D matrix arrays (Philips Medical Systems). Functional MR was defined as impaired coaptation of the mitral leaflets due to the left ventricular and annular dilatation or restricted leaflet motion. Degenerative MR was defined as disruption in any part of the mitral apparatus [12]. MR severity was graded based on the combination of the jet area, vena contracta and the size of flow convergence zone.

All echocardiographic measurements were performed according to the ESE/EACVI recommendations [13-17]. In brief, the mitral valve inflow was assessed from continuous wave Doppler images and utilized for quantification of mean MPG and PHT prior interventional therapy. In case of atrial fibrillation, at least 3 measurements were performed and mean values were calculated. After one or more clips were placed, the beam of CW Doppler was located in the center of the largest orifice and the postprocedural MPG and PHT were assessed. Heart rate was assessed at the timepoint of continuous wave Doppler assessment. 3-dimensional MVOA was assessed using the QLAB software Version 2.3 (Philips Healthcare, Amsterdam, the Netherlands). 3-dimensional datasets, acquired over 4 heartbeats, were used and MVOA was manually traced at the maximal opening of the valve during early LV filling after adjusting cut planes (Figure 1) [14,18]. Likewise, the EORA was quantified from 3-dimensional datasets, acquired over 4 heartbeats.

LV ejection fraction was measured using biplane method at LV end-systole and LV end-diastole in the apical 2- and 4-chamber views in TTE examination prior and after interventional therapy [19]. Likewise, RV/RA gradient, left atrial volume index left ventricular end-systolic volume, left ventricular end-diastolic, were quantified from TTE prior the implantation and from follow-up examination. As MV inflow parameters were not routinely assessed as part of the follow-up examinations as per institutional standards, only data from prior MV repair is provided. The left atrial volume was measured from apical four chamber view at the end systole, shortly before the mitral valve opens in four- and two-chamber view and indexed to BSA. With standard thransthoracic pulsed wave-Doppler echocardiography using the apical four chamber view, the peak early-diastolic (E), atrial systolic (A) transmitral flow velocities, the deceleration time of the E wave (DT) were measured and the velocity of mitral annual motion at the lateral ring (lateral E`) using PW tissue Doppler was mesuered according to the ESE/EACVI recommendations for the evaluation of left ventriclular diastolic function [13]. 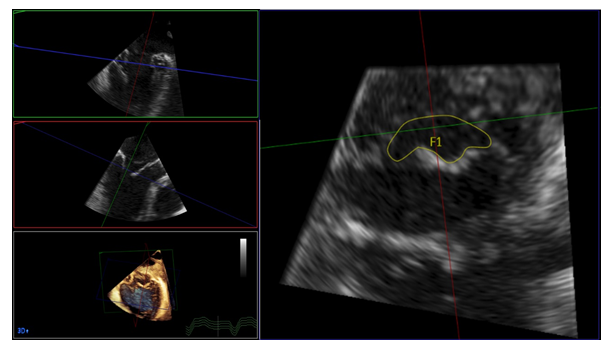 Figure 1: 3-dimensional analysis of mitral valve orifice area (MVOA). Datasets, acquired over 4 heartbeats were analyzed offline. Using multiplanar reformations, an image of the mitral valve orifice was created at maximal opening of the valve during early diastole. The MVOA was then traced manually.

The implantation procedures were performed as recommended by the respective manufacturer (Abbott, Chicago, Illinois, U.S.). In brief, venous access was generated via a femoral vein. After transseptal atrial puncture, the guiding catheter was advanced into the left atrium, allowing to proceed and position the device above the mitral annulus plane. Finally, the clip was implanted by grasping the anterior and posterior mitral valve leaflets and adaption of the leaflets is achieved by closure of the device. If reduction of mitral valve regurgitation by implantation of a single clip was not sufficient, at least one further device was implanted.

The baseline characteristics are presented as mean ± standard deviation for continuous variables and as frequency and percentages for categorical variables. All echocardiographic variables were normally distributed. Pearson correlation coefficient was used to determine the correlation of MVOA with other echocardiographic measures. Univariate and multivariate linear regression analysis was used to determine the association of MPG, PHT, EORA, and heart rate with MVOA. For multivariable analysis, two models were used contained MPG, PHT, EORA, and heart rate and model 2 additionally adjusted for age, gender, BMI, left ventricular ejection fraction at baseline, and hypertension. For regression analysis, all included variables were checked for co-linearity where no concern was observed. Effect sizes are depicted per each standard deviation chance of echo characteristic. All analyses were performed using the SAS software (version 9.4, SAS Institute Inc.). A p-value of <0.05 indicated statistical significance.

Overall, echocardiographic measurement of 51 patients (mean age 80.0 ± 13.3 years, 49% male) both prior and post mitral valve repair were included (102 datasets). The majority of patients had functional mitral regurgitation. Detail patient characteristics of the cohort are depicted in table 1. For interventional mitral valve repair, a mean of 1.24 devices were implanted (1 device in 40 cases, 2 devices in 10 cases, and 3 devices in a single case), leading to a reduction in MVOA from 5.8 to 3.0 cm². Details of the mitral valve characteristics prior and post interventional valve repair are depicted in Table 2.

MPG and PHT were modestly inversely correlated with MVOA (Pearson correlation coefficient for MPG: -0.45, p<0.0001, for PHT: -0.56, p<0.0001). In contrast, MVOA was positively correlated with EORA (0.65, p<0.0001). With HF, we observed no relevant correlation (0.06, p=0.5). In regression analysis, both MPG and PHT were significantly associated with MVOA (table 3). This association was independent of adjustment for each other, heart rate, EORA remained stable when additionally controlling for age, gender, BMI, left ventricular ejection fraction at baseline, and hypertension. In univariate analysis, r-square was 0.202 for MPG and 0.312 for PHT. Combining the information from both parameters, r-square improved to 0.372. Further adding EORA and heart rate improved the r-square to 0.516, ultimately further improving the prediction of MVOA. When adding age, gender, BMI, left-ventricular ejection fraction at baseline, and hypertension to the model, r-square was only modestly improved. Stratifying by measures prior and post interventional mitral valve repair, associations of MPG, PHT, and HR with MVOA were not significantly different, while for EORA, associations were significantly weakened after mitral valve repair (Table 4).

*Mitral inflow parameter are available only at the baseline

Table 3: Univariable and multivariable linear regression analysis for the association of MVOA with other echocardiographic measures

Table 4: Univariable linear regression analysis for the association of MVOA with other echocardiographic measures stratified by prior and post mitral valve repair.

In the present study, we evaluated whether routinely assessed measures of mitral valve stenosis can reliably estimate 3-dimensional MVOA prior and post interventional mitral valve repair. We found that both MPG and PHT were significantly associated with MVOA. However, the prediction of MVOA can be improved when combining these measures together with heart rate and information on the degree of regurgitation. Our results suggest that prior and post mitral valve repair, both MPG and PHT together with the patient’s heart rate and assessment of the degree of mitral valve regurgitation might improve the prediction of true MVOA.

Interventional mitral valve repair via adaptation of the anterior and posterior mitral valve leaflets leads to changes in mitral valve geometry. Predominantly, this procedure reduces the anterior-posterior valve diameter, while also decreeing the medial-lateral diameter as well as overall annulus size [5,20]. Reduction of annulus dimensions is associated with improved mitral regurgitation, especially in functional genesis [9]. Together with the coaptation of the anterior and posterior mitral valve leaflet, this leads to a reduction in the MVOA. In our cohort, the relative reduction in MVOA following the procedure, however, was lower than in other studies, potentially due to the high proportion of patients treated with only a single device [5]. In terms of degree of mitral regurgitation prior to interventional therapy, our cohort was comparable with the COAPT cohort. While in our study only 2 of 51 patients (3,9%) had a baseline EORA of <0.3cm², this was also the case in the minority of patients in the COAPT trial (14%) [21]. The fact that the association of EORA on MVOA was weaker after mitral valve repair suggests that the degree of mitral valve regurgitation only relevantly impacts assessment of mitral valve stenosis if relevant mitral valve regurgitation is present. In terms of predictors of mitral valve stenosis after interventional mitral valve repair, preprocedural MVOA was the best single predictor in patients treated with one device. In contrast, for patients receiving 2 or more devices, other anatomical measures outperformed 3-dimensional orifice area [8]. These results are in line with our findings and others, indicating that multiple parameters should be accounted for assessment of potential mitral valve stenosis and optimal patient selection [22-24]. In terms of changes in cardiac parameters due to interventional mitral valve repair, we not only observed a reduction in EROA and decreased MVOA but also a relevant reduction in NT-proBNP as marker of cardiac stress. Likewise, left atrial volume index and the gradient between right ventricle and right atrium during systole decreased. In contrast, we observed a slight decrease in LV ejection fraction, most likely caused by the increased afterload due to the reduction in regurgitation.

In clinical routine using transthoracic echocardiography, MPG is frequently used for assessment of potential mitral valve stenosis. However, the present findings direct towards the recommendation of a multi-parameter approach for assessment of MVOA in patients prior and post interventional mitral valve repair. In this cohort of patients with severe mitral valve regurgitation prior to therapy, the regurgitant volume leads to a relative increased pressure gradient despite normal MVOA. Likewise, MPG is highly dependent on the duration of the LV-filling period and hence the HF. Therefore, on transthoracic echocardiography, the information of MPG, PHT, HF and EORA should be combined to provide best assessment of the anatomical mitral valve opening area for evaluation of patients prior and after interventional mitral valve repair.

There are several limitations of this study. First, our results are based on a retrospective cohort. Given its cross-sectional design, we cannot establish causality. In addition, the present data represent a single center experience. Techniques in device implantation may be different compared to other centers, leading to uncertainties of generalization of our results. For example, sufficient reduction of mitral regurgitation was archived by a single device in the majority of patients in our center, which may not be the case in other hospitals. However, given the high volume of interventional atrio-ventricular valve repair performed in our center by a dedicated team with highly standardized protocols and overall high success rate (also reflected by reduction in EORA in this cohort), overall experience of our center is not of concern.

MPG and PHT modestly predict 3-dimensional MVOA prior and post edge-to-edge mitral valve repair, independent of heart rate and regurgitant area. However, combining the information of MPG and PHT with patient’s heart rate and regurgitation allows reliable prediction of MVOA. Therefore, all 4 variables should be taken into account when estimating MVOA in interventional mitral valve repair, whenever quantification of 3-dimensional true opening area is not available.

All authors have read and agreed to the published version of the manuscript.